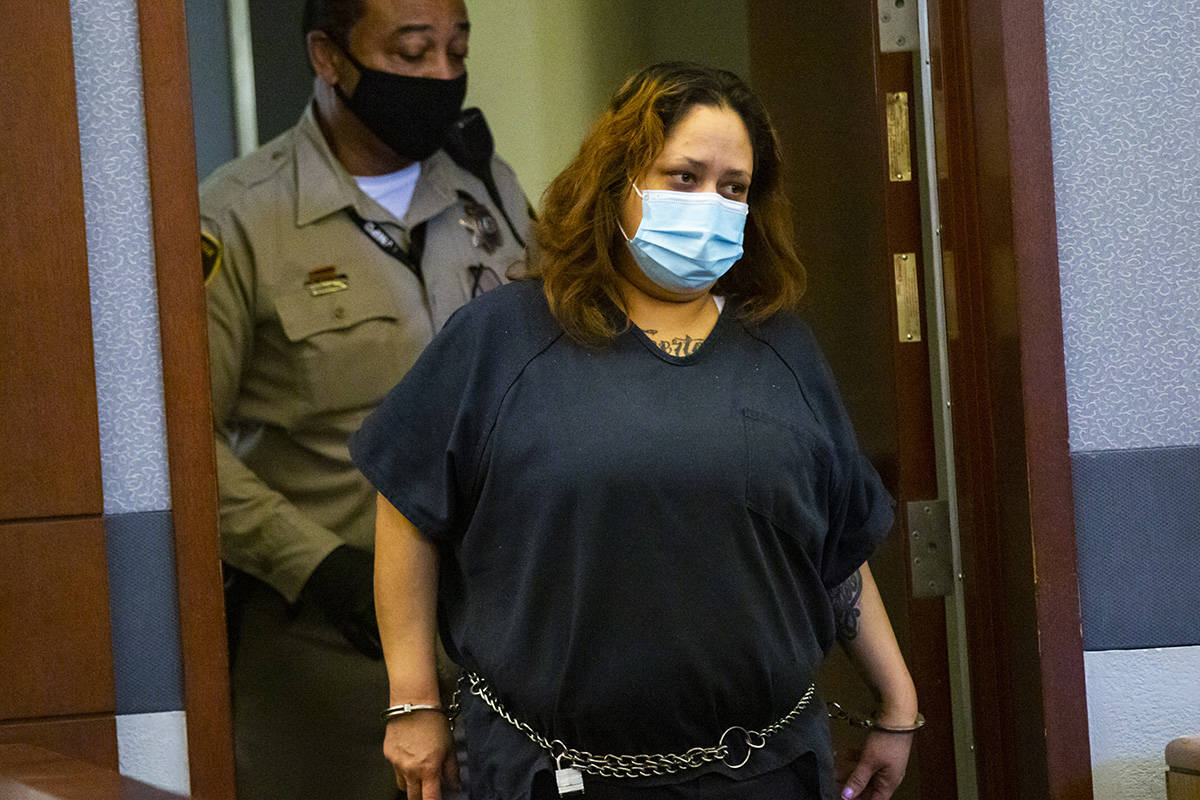 Malinda Mier, who faces charges including manslaughter in deaths and injuries from the Alpine Motel Apartments fire, enters the courtroom for a preliminary hearing at the Regional Justice Center in Las Vegas on Wednesday, Oct. 21, 2020. (Chase Stevens/Las Vegas Review-Journal) @csstevensphoto

Malinda Mier and her company, Oromgmtsvcs LLC, were subpoenaed in February for documents related to civil cases filed against the complex, according to the motion filed Tuesday.

Neither Mier nor her attorneys have responded to it.

“This is the last resort,” attorney Robert Murdock said. “My goal here is to not have her held in contempt; my goal is to get the documents. We’re trying to get justice for my client.”

The December 2019 blaze left six people dead and dozens injured just days before Christmas. Some residents were trapped inside after they found a rear exit door barricaded.

More than 40 fire code violations were discovered during an inspection of the property after the fire, including a defective fire alarm system as well as missing and inoperable smoke detectors. A Review-Journal investigation found that Las Vegas city officials rebuffed repeated police efforts to close the property before the fire.

Mier and the owner, Adolfo Orozco, both face one count of manslaughter for each of the six people who died; 15 counts of performance of an act or neglect of duty in disregard of safety resulting in substantial bodily harm or death; and one count of destroying and concealing evidence.

The criminal case is on hold after Orozco’s defense attorney appealed a judge’s decision contempt order on an investigator who refused to testify in the preliminary hearing.

Murdock filed a civil lawsuit last year on behalf of his client, Christian Spangler. At the time, Murdock said his client suffered “significant and severe” injuries, including encephalopathy, or brain swelling, an anoxic brain injury caused by a lack of oxygen and extensive burns.

Dozens of residents have filed lawsuits, and the civil cases have been consolidated. Murdock’s motion will apply to all of them.

Mier and her company, Oromgmtsvcs LLC, are not named in the civil lawsuit, but she is considered a witness.

In his motion, Murdock included email exchanges between he and Rawlings since March 22. In the emails, Rawlings said he was trying to get in touch with Mier.

“My office and investigators have been unable to reach my client, Malinda Mier,” Rawlings wrote in one email dated April 19. “We have also reached out to her criminal attorney and have pretty much exhausted our efforts in an attempt to locate her over the last 60 days.”

Murdock said that explanation made no sense and that he had no other choice but to file his motion.

“Something is odd here,” he said. “It just doesn’t make any sense that this person who is under intense supervision can’t be found by her own lawyers.”

A hearing for the motion is set for July 13.