Following a Nevada Supreme Court ruling overturning the original sentencing for a man who pleaded guilty in a 2018 fatal DUI crash, a new judge on Tuesday imposed the same prison term. 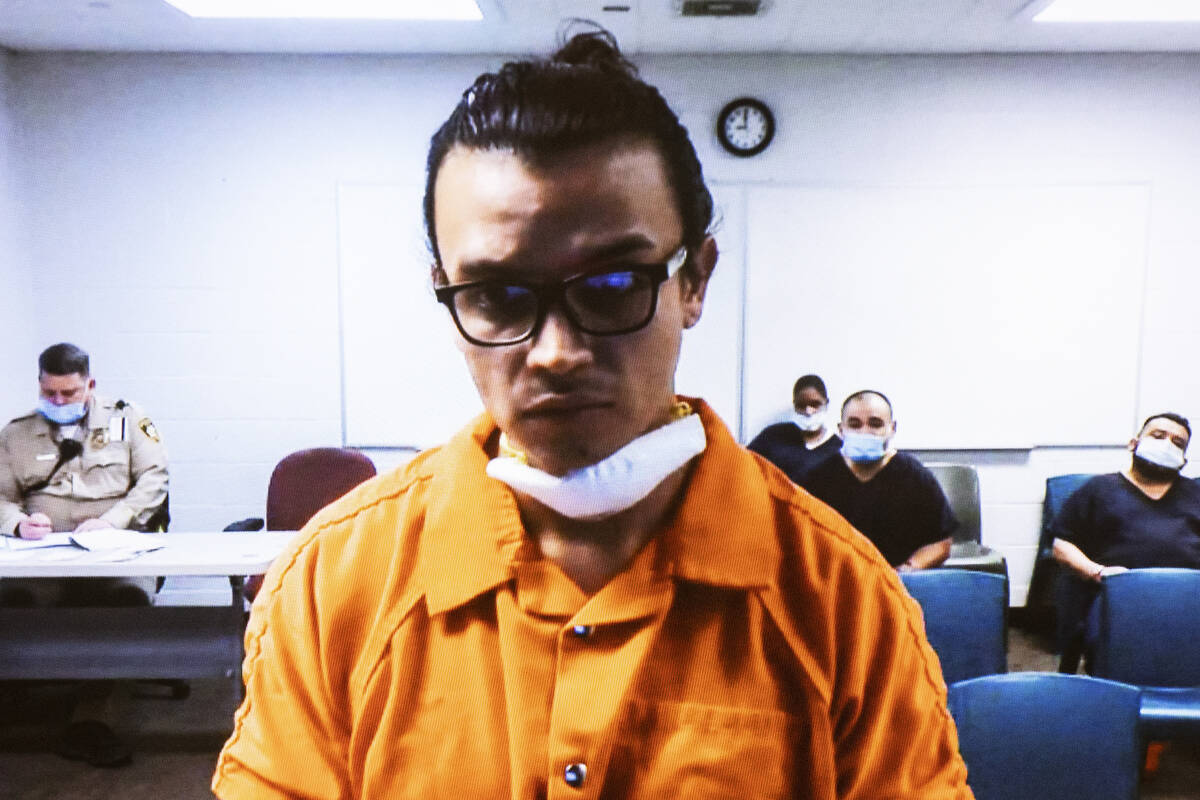 Henry Aparicio, who pleaded guilty in a 2018 DUI crash that killed Damaso Puente and his wife, Christa, appears in court via videoconference during his resentencing at the Regional Justice Center on Tuesday, Jan. 25, 2022, in Las Vegas. (Bizuayehu Tesfaye/Las Vegas Review-Journal) @bizutesfaye 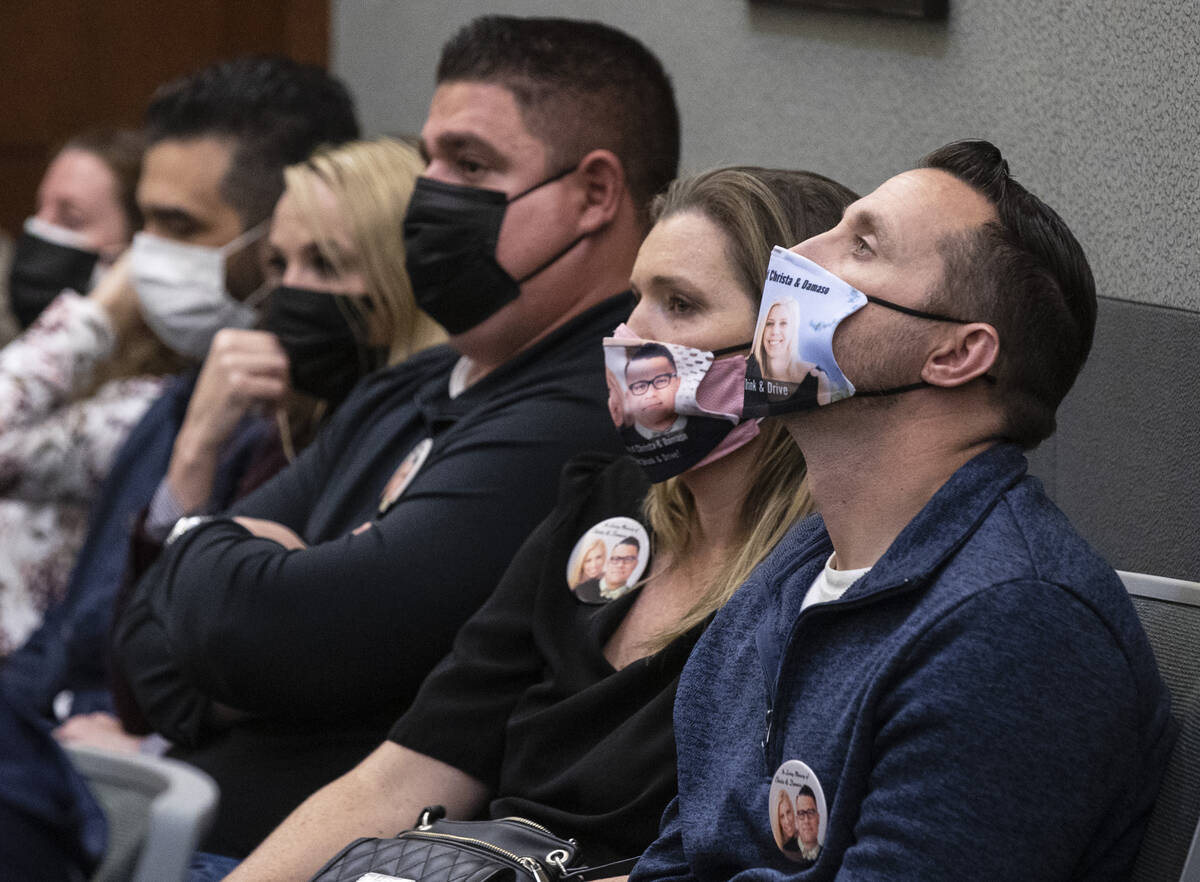 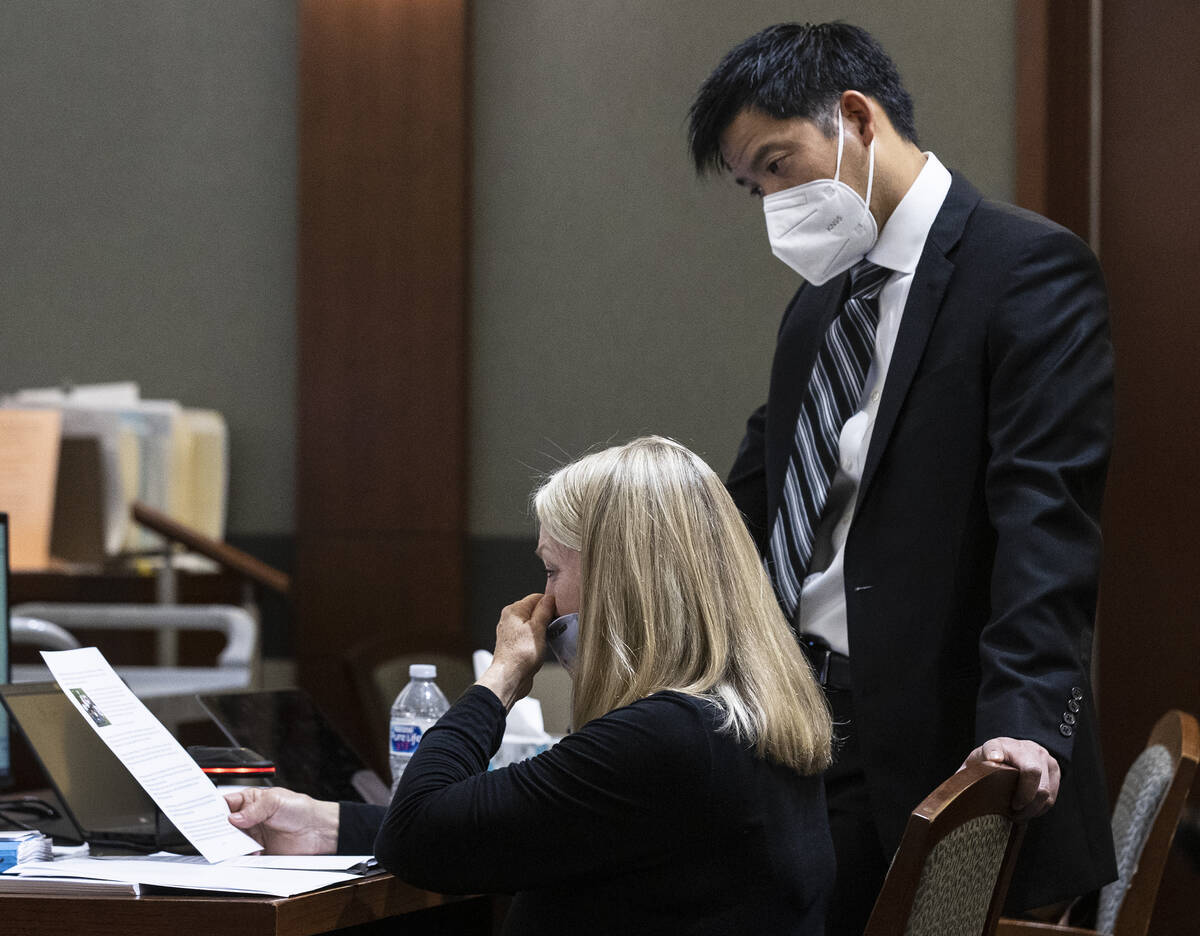 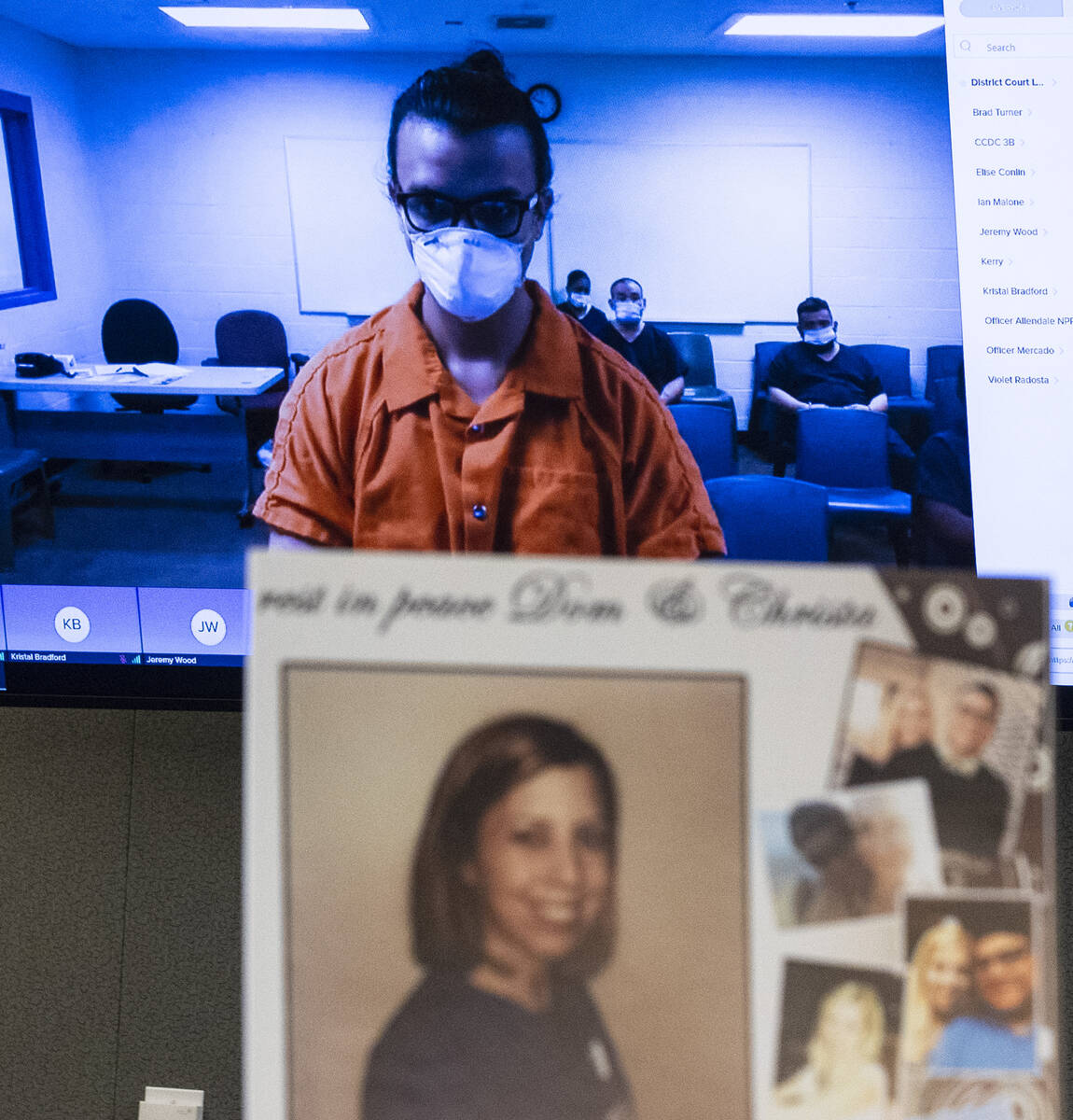 Photographs of DUI crash victims Damaso Puente and his wife, Christa, are displayed as Henry Aparicio appears in court via videoconference for his resentencing in the case at the Regional Justice Center on Tuesday, Jan. 25, 2022, in Las Vegas. (Bizuayehu Tesfaye/Las Vegas Review-Journal) @bizutesfaye 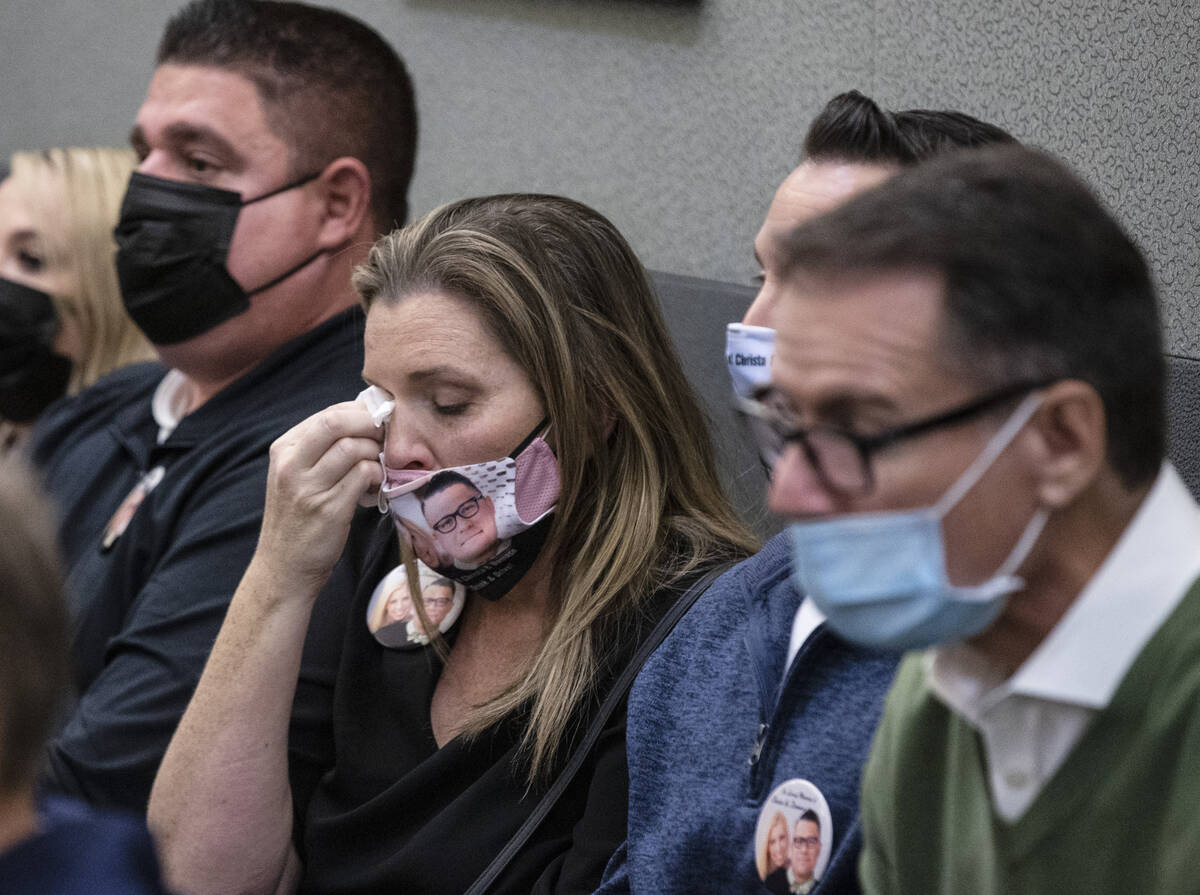 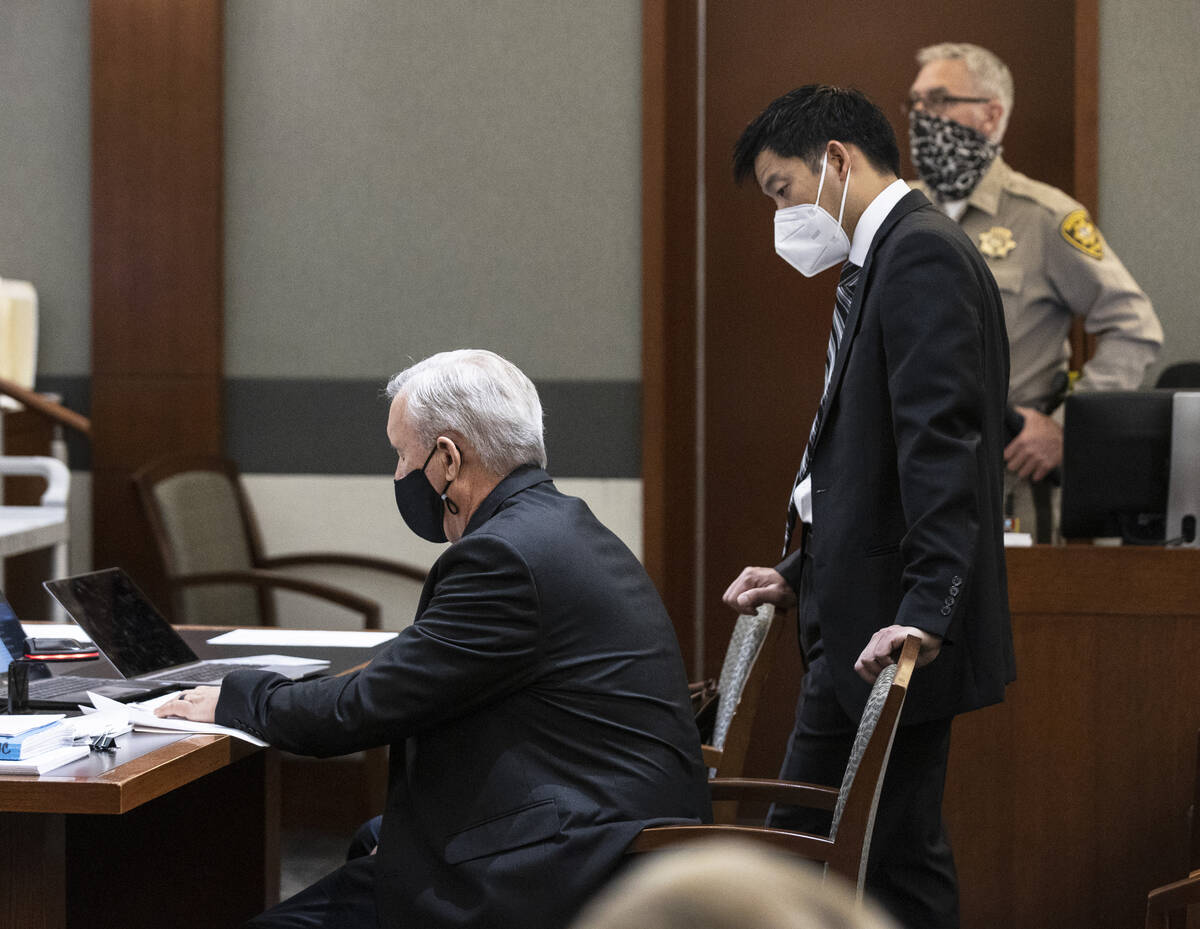 Following a Nevada Supreme Court ruling overturning the original sentence for a man who pleaded guilty in a fatal DUI crash, a new judge on Tuesday imposed the same prison term.

In October 2019, District Judge Cristina Silva ordered Henry Aparicio to serve 15 to 44 years in prison for the high-speed crash that killed husband and wife Damaso Puente, 39, and Christa Puente, 33.

“I have considered Judge Silva’s prior sentence, and I don’t believe it to be unreasonable,” District Judge Jerry Wiese said Tuesday before issuing the same sentence.

This past October, the Supreme Court overturned Silva’s decision after finding that she should not have considered the majority of the nearly 50 victim impact statements prosecutors presented.

Silva had accepted dozens of the statements under the constitutional amendment known as Marsy’s Law, which she wrongly concluded applied to “anyone who’s impacted by the crime.” The Supreme Court ruled that under both the amendment and state law, a victim is defined as someone “injured or directly and proximately harmed” by the crime, according to a decision authored by Chief Justice James Hardesty.

“We are required to vacate the sentence and remand this case, despite the inevitable pain and distress this will cause the surviving family members to again participate in a sentencing hearing, because it is not clear that the district court would have imposed the same sentence absent these errors,” Hardesty wrote.

Aparicio’s defense attorney, Damian Sheets, said Tuesday he may appeal Wiese’s decision because the judge said he considered Silva’s order, although the Supreme Court decided it was flawed, and sentenced Aparicio to the same time in prison.

“I think there’s going to be some very legitimate concern,” Sheets said.

During the hearing, Sheets said Aparicio developed an alcohol addiction after his time in the military and had no prior criminal history.

Aparicio, who appeared through a video call, told the judge that he continues to be wracked with guilt over the crash.

“I did not mean to go out there that night and take two lives away,” Aparicio said through tears. “I’m not a bad man, I promise you, I swear.”

Prosecutors have said Aparicio was speeding on Sahara Avenue in May 2018 when his Mercedes-Benz C250 slammed into the back of a Toyota Prius stopped at Hualapai Way, killing the Puentes.

Aparicio, now 27, was driving nearly 100 mph, according to the Supreme Court decision.

His blood alcohol level was about four times the legal limit at the time of the crash, officials have said.

Malone sobbed as she told Wiese about her daughter. Christa Puenta loved to learn and pursued dozens of hobbies when not working as an oncology nurse, her mother said. The 33-year-old was a registered organ donor, but her family was unable to fulfill that wish due to the injuries she suffered in the crash.

“He crushed them like someone stepping on an aluminum can,” said Christa Puenta’s father, Daniel Malone. “They never had a chance.”

Diane Malone, who spoke for more than 40 minutes during the hearing, urged the judge to give Aparicio a lengthy sentence.

“How many innocent people have to die?” she said. “The only deterrent that I see is tougher penalties, tougher sentences for those who choose to drive drunk.”