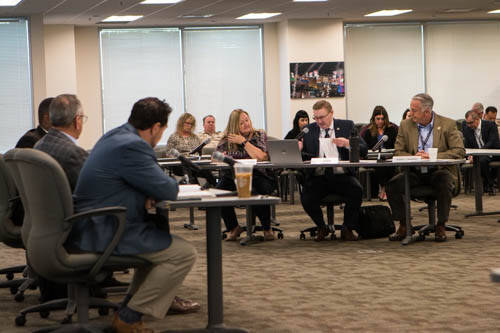 The estate of a California man who was illegally questioned by Las Vegas police during a traffic stop of a van carrying motorcycle club members is being awarded $300,000.

James Iiams, who died in June following a battle with colon cancer, would have been satisfied with the outcome of his 2018 lawsuit, the estate’s attorney Stephen Stubbs said Monday, hours after the Metropolitan Police Committee of Fiscal Affairs approved the settlement.

“The main part of the settlement isn’t the money — the money clearly is happening — but what was important for my client had nothing to do with money,” Stubbs said, adding that U.S. District Judge Richard Boulware had also approved negotiated changes related to Metro’s policy and training.

Much of the April 1, 2017, incident was captured on body-worn cameras and footage Stubbs filmed from the scene.

A video of the encounter published by Stubbs has been viewed more than 1 million times on YouTube.

Iiams was one of more than a dozen passengers riding in a van that was heading to a charity event for a “fallen motorcycle rider” before Metro stopped the vehicle for driving without headlights.

The video captured an officer telling the passengers to pass their identification cards forward.

The officer’s demand constituted a violation against the passengers of the vehicle because there was no probable cause of a crime, according to Stubbs and court documents.

During the stop, Iiams summoned Stubbs, who was at the event across the street, the attorney said.

Stubbs could be seen confronting the officers and their sergeant, telling them about the passengers’ constitutional rights.

The attorney shouted at Iiams, who was being questioned outside the van, to ask for his ID back. After he did, the officers stopped questioning him.

But body camera footage showed that police had already asked Iiams if he had a moniker and who he “rides with,” meaning what motorcycle club he belonged to.

Metro attorneys wrote in court documents that events involving the Mongols “historically, and nationally, can be associated with crime and violent encounters,” adding that police were aware of the charity event.

Stubbs said that part of the settlement included the distribution to all Metro officers of a “Constitutional Corner Bulletin” with language he and Metro negotiated.

The memo outlines limitations officers have when conducting a traffic stop and when they can question a passenger. Furthermore, Stubbs said, the agreement requires officers to be trained on the memo once a year for five years.

Metro officials could not be reached for further comment.