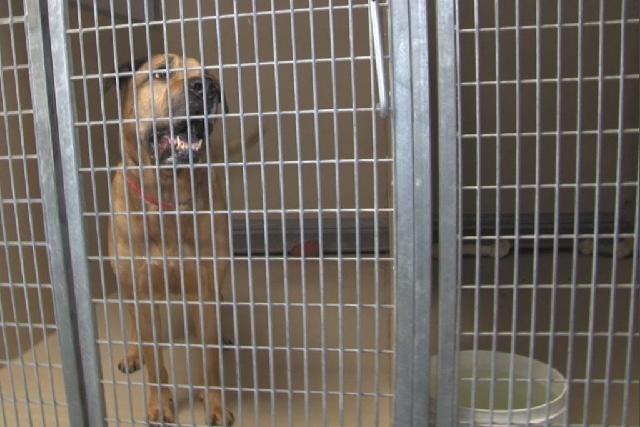 The Nevada Supreme Court heard arguments Wednesday to decide the fate of Onion, a mixed-breed dog and family pet that killed a 1-year-old child in 2012. Onion is being held at the Henderson Animal Care and Control Facility.

CARSON CITY — The fate of Onion the dog is now in the hands of the Nevada Supreme Court after a subdued and unemotional 50-minute hearing Wednesday that was in stark contrast to the public outcry over the controversy.

The hearing in the court chambers was held in front of a few members of the media and a couple of other onlookers. There were no protests outside the court for Onion or the 1-year-old child court records say he killed accidentally more than a year ago in Henderson.

This despite the public attention that has been generated by the case on both sides of the issue.

The attorney for an animal rights group seeking to prevent the death of Onion, a 120-pound, mixed breed dog that killed Jeremiah Eskew-Shahan, said he is hopeful the court will return the case to Clark County District Court.

“I believe the court understood the issue,” said Richard Rosenthal, general counsel and co-founder of the Lexus Project, after the hearing. “I think that the transfer of ownership is an issue that really is entitled to a hearing and we’re hopeful that the court is going to give us the opportunity to move forward to save this dog.”

Onion, who remains in the control of the Henderson Animal Care and Control facility, had shown no prior aggressive behavior before the tragic accident, Rosenthal told the court.

On April 27, 2012, Onion grabbed Eskew-Shahan by his head after being awakened when the child fell on him and grabbed his ears. Onion let go after several seconds but the child died from his injuries.

Henderson Assistant City Attorney Brandon Kemble asked the court to uphold the lower court decision that found the New York-based Lexus Project had no standing to challenge the decision by Henderson officials to euthanize the dog.

Ownership of Onion is a major issue in the dispute.

Henderson officials say the child’s grandmother and owner of Onion, Elizabeth Keller, surrendered ownership to the city on the day of the accident.

Rosenthal said the transfer was under duress and not done according to procedure.

Keller later transferred ownership of Onion to the Lexus Project, which had already filed an action in District Court seeking to prevent the dog’s death. The group wants to send Onion to a sanctuary in Colorado.

Asked why Henderson is opposed to such an option, Kemble said after the hearing it would be a violation of the law to transfer an animal that has been deemed by the city to be vicious. The liability would be too great on behalf of the city, he said.

The court will rule later in the case.

Several issues were raised by justices during the hearing, including why there was no evidentiary hearing at the District Court level when the question of ownership and transfer of the dog were clearly at issue.

Justice James Hardesty also asked how Henderson city officials could argue that Keller did not request a hearing before the city Animal Advisory Committee to challenge the decision to euthanize Onion when the city is arguing it is the owner of the dog.

Las Vegas animal advocate Gina Greisen, who listened in on the hearing, said based on the questions asked by the justices, she believes the case will be returned to District Court.

“They asked hard questions of both sides,” she said. “But there are so many issues over the challenge regarding the ownership, I think it will be remanded.”

Greisen said the hearing did result in city officials finally acknowledging that Onion has remained in a cage with no exercise since being taken by the city.

Kemble said Onion is in a large cage and is seen by a veterinarian.

Colleen Lynn, founder and president of Dogsbites.org, a national dog bite victims’ group, continues to question the motives of Lexus in the dispute.

“There are a lot of animals out there that have never had an act of aggression,” she said after listening in to the hearing. “Why is this group doing this for a dog that killed a child? That I can’t understand. It’s misguided and a threat to public safety.”

Lynn said if the dog does go to a “so-called animal sanctuary,” there will likely be no government agency oversight and it could end up getting adopted out to another family.

“Anything can happen,” she said.