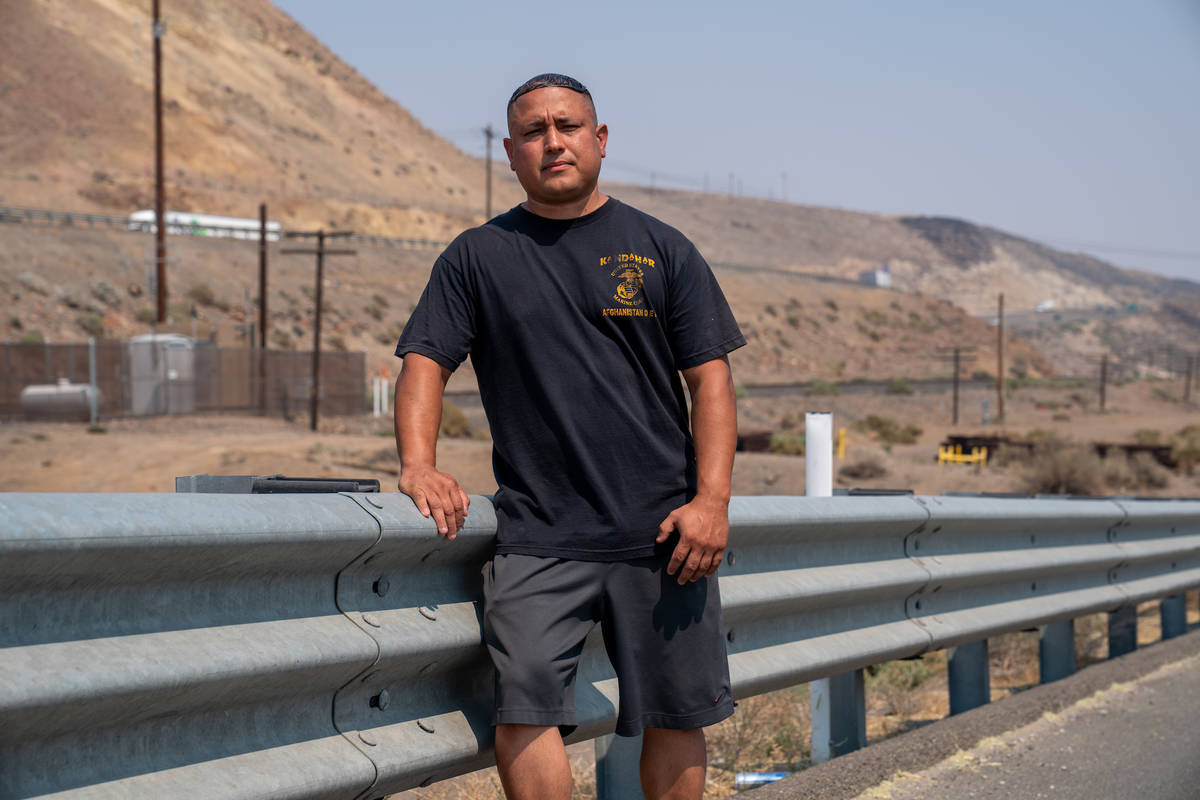 Stephen Lara, a 39-year-old retired Marine, was pulled over in February by a Nevada Highway Patrol trooper for following a truck too closely. The agency would seize nearly $87,000 of his life savings during the stop, even though Lara was not cited for the traffic infraction or charged with a crime. (Institute for Justice)

A new lawsuit claims the Nevada Highway Patrol unconstitutionally seized nearly $87,000 from a retired Marine sergeant during a traffic stop in February through a controversial federal program known as equitable sharing.

State troopers thought the former Marine, 39-year-old Stephen Lara, fit the profile of a drug trafficker, but the troopers ultimately let Lara go. He was not cited during the traffic stop nor has he been charged with a crime.

Yet the federal government held on to his cash for more than six months, the lawsuit states, well beyond its 90-day deadline to decide whether to return the money, obtain a criminal complaint or an extension, or initiate federal civil forfeiture proceedings.

“Police on the streets should not have the power to take someone’s money from them based on mere suspicion,” one of Lara’s attorneys, Wesley Hottot, said Wednesday.

Hottot is a senior attorney for the Institute for Justice, a nonprofit advocating for forfeiture reform.

The seizure left Lara in a “legal limbo” as he fought for the return of his life savings — an amount he said he began to put away more than 20 years ago when he joined the Marines.

His 17 years of active-duty service included tours in Iraq and Afghanistan before an honorable discharge, according to the lawsuit filed Tuesday in Washoe County District Court against the Nevada Department of Public Safety, which oversees the Highway Patrol. On the same day, Lara’s team of attorneys also filed a federal lawsuit in Nevada against the Drug Enforcement Administration to get his money back.

On Wednesday, the DEA agreed to return the money, a decision that Hottot said was made “only after” the lawsuits were filed and Lara’s experience was featured in a Washington Post story.

Katherine Pfaff, a DEA spokeswoman, confirmed to the Las Vegas Review-Journal that the money would be returned to Lara but did not further comment on the lawsuits, while Joshua Stueve, a Justice Department spokesman, said Thursday that the government is reviewing its existing forfeiture policy.

“He’s happy that his money is coming back. There’s no doubt about that,” Hottot said. “But he’s very angry about what happened to him. All day today, he’s been emphasizing how important it is to continue with the state case, to make it so that this doesn’t happen to anyone else in the future.”

The lawsuit in District Court is seeking a judgment that would block the Highway Patrol’s participation in the equitable sharing program, which police reform advocates have long criticized as an “abusive” and “massive” loophole that enables “policing for profit.” The Highway Patrol deferred a request for comment on the state lawsuit to the DEA.

A report on civil asset forfeiture published last December by the Institute for Justice states: “By handing over seized property to the federal government, state and local law enforcement agencies can harness the litigation power of the federal government — and circumvent state laws that provide better protection to property owners or direct forfeiture proceeds to a neutral account.”

The program allows state and local law enforcement agencies to bypass state forfeiture laws by partnering with the federal government to seize property — and receive up to 80 percent of the proceeds.

In Lara’s case, the lawsuits state, the Highway Patrol stood to gain $69,250.

According to Nevada law, at the close of each fiscal year, if the state government’s forfeiture account contains more than $100,000, 70 percent of the excess must be given to the school district where the property was seized. By contrast, there is no limit set by Nevada law for what state agencies can make through the equitable sharing program.

“Who among us can afford to have their life savings taken away for six months and have to hire a team of lawyers to get it back?” Hottot told the Review-Journal. “This is not a case of the forfeiture laws working. This shows how the forfeiture laws don’t work.”

On Feb. 19, Lara was driving through Nevada, from his home in northwestern Texas, to visit his two teenage daughters in Portola, California, where they live with Lara’s ex-wife.

Just outside of Reno, according to the state lawsuit, Highway Patrol trooper Chris Brown pulled Lara over as part of an enforcement campaign to educate drivers on “violations they may not realize they’re committing.” The trooper initially applauded Lara’s driving but told him he was following a tanker truck too closely.

During the stop, the trooper asked Lara about his travel plans, family, bank accounts, sources of income and monthly expenses. Lara volunteered that he was traveling with a large amount of cash in a backpack — because he doesn’t trust banks — that he had legitimately earned. He had ATM receipts to prove it, he told the trooper.

According to the lawsuit, the trooper suspected that Lara and his money were tied to drug trafficking. But Hottot, Lara’s attorney, told the Review-Journal that his client had been traveling with his life savings because he was planning to look at homes in Northern California during that trip.

Within 25 minutes of initiating the traffic stop, Brown would call his DEA counterpart, agent Shane Murray, to alert him of “a big bundle of money” he had just come across, followed by a call to his sergeant, Glenn Rigdon.

Rigdon, who also is named as a defendant in the state lawsuit, soon would arrive at the scene of the traffic stop. Before exiting his vehicle, according to the suit, Rigdon got on a call with the DEA agent. The call was recorded by Rigdon’s body camera.

During the phone call, the lawsuit states, Rigdon assured the DEA agent that there would be “no issues” because “it’s too easy to do an adoption,” referring to the equitable sharing program. Before hanging up, Rigdon promised to text the agent “the money count after we get it.”

About 90 minutes after Lara was pulled over, according to the Institute for Justice, the state troopers “took his life savings and left him on the side of the road without enough money to even afford gas to drive home.”

Hottot said it could take weeks before Lara’s money is returned in full. But once he has the money, the attorney said, Lara hopes to put it toward a down payment for a house for himself and his daughters — just as he had planned to do in February before the traffic stop.