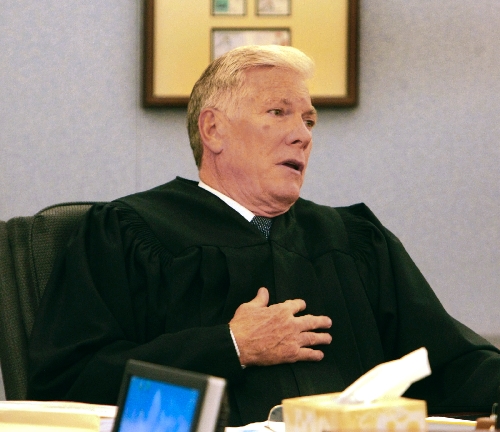 In a strongly worded order, Judge Donald Mosley dismissed a drug trafficking case against Nathan Hamilton and Leonard Schwingdorf, who said they had supplied the herb to patients unable to grow it themselves.

“It is apparent to the Court that the statutory scheme set out for the lawful distribution of medical marijuana is either poorly contemplated or purposely constructed to frustrate the implementation of constitutionally mandated access to the substance,” Mosley wrote in his decision.

Mosley, who retired from his judgeship Friday, added that he “is not a proponent of medical marijuana” but that he was sworn to uphold the state’s constitution.

Mosley, who has long suggested the medicinal herb law is “mind boggling,” previously had dismissed the case over a legal technicality before the district attorneys recharged the two men.

Defense attorney Bob Draskovich, whose firm represents both men, was not available for comment, his office said. A news conference is scheduled for Monday morning.

Prosecutor Chris Laurent did not return a call requesting comment.

Draskovich has said the only way a patient can now legally possess marijuana is to first commit a crime to obtain it. By not clearing the way for a patient to legally obtain marijuana, the Legislature failed to abide by the amendment to the state constitution that led to the enactment of the law, the lawyer has said.

Mosley agreed. “The law falls short however in providing a realistic manner in which a qualified purchaser and a qualified distributor of marijuana may function, thus frustrating the clear intent of the Nevada Constitutional Amendment,” the judge’s decision read.

Under the amendment, ratified by Nevada voters in 2000, “the Legislature shall provide by law for … appropriate methods for supply of the plant to patients authorized to use it.”

As it stands, one Nevada law allows medical marijuana cardholders to possess, deliver or produce minute amounts of marijuana for pain relief. But other state laws make it illegal to buy or sell marijuana, leaving no realistic way for patients to obtain the herb.

Prosecutors say local marijuana dispensary staff, such as Hamilton and Schwingdorf, suggested a specific cash donation for the marijuana, which under state law qualifies as “consideration” and is illegal. Also, the dispensaries were growing an abundance of marijuana plants, more than the seven plants allowed under the medical marijuana law.

By disallowing any payment for the herb, patients must rely on the good will of others to obtain the substance, which Mosley found ludicrous.

“It is absurd to suppose that from an unspecified source ‘free’ marijuana will be provided to those who are lawfully empowered to receive it,” Mosley wrote.

Mosley also criticized the amount of marijuana allowed to be produced by a purveyor. The law allows someone registered to possess 1 ounce, three mature plants and four immature plants at one time, meaning a person could arguably only hold one dose at a time.

“This arrangement is of course ridiculous and in effect would make impossible any commercial distribution of medical marijuana,” Mosley said.

Mosley’s decision contradicts another from a Clark County judge allowing prosecution of six defendants from Jolly Green Meds. That co-op was busted by Las Vegas police, who alleged it was distributing marijuana for compensation in the form of donations.

District Judge Douglas Smith had earlier denied a motion to dismiss the case, acknowledging the Legislature did not appropriately address “methods of supply of medicinal marijuana to patients authorized to use it.” Smith halted the prosecution because he expected an appeal of his decision.

With Smith allowing that case to go forward and Mosley tossing another, the Supreme Court is expected to hear the appeals and resolve the clash of legal opinions.

The state’s high court either could direct the district courts to move forward with trials based on the criminal statutes or force the Legislature to review the medical marijuana law.

More than a dozen defendants in several cases are facing criminal charges for distributing medical marijuana. The defendants say they were trying to fill a void left by the Legislature and supply medical marijuana to patients unable to grow it themselves.

But authorities have cracked down and closed nearly all the local entities distributing marijuana to state-registered patients because, the authorities allege, the cooperatives are violating Nevada law.