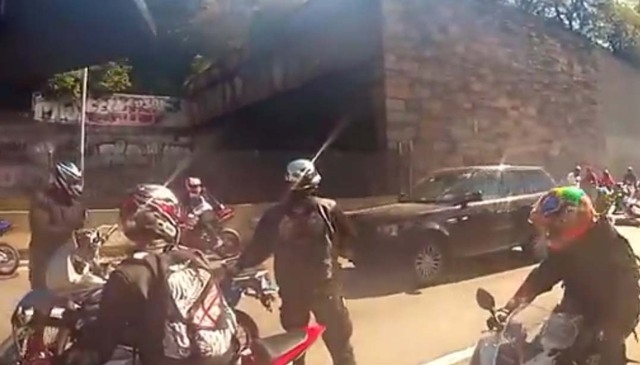 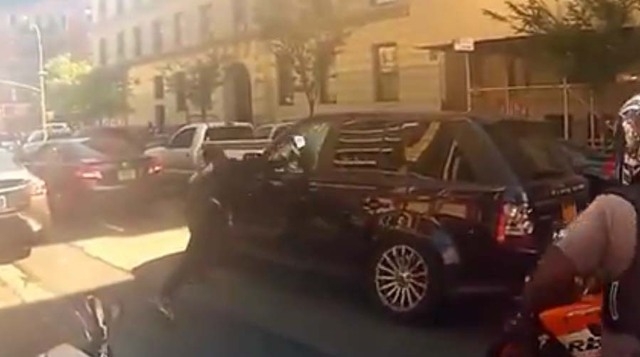 NEW YORK — A man driving with his family along a New York City highway was attacked and beaten by a large group of motorcyclists who first surrounded his SUV and stopped it on the road, then chased him for miles after he plowed through the blockade of bikes in an attempt to escape.

One biker suffered two broken legs when the SUV ran over him, police said. A second biker suffered a leg injury. The driver, who was traveling with his wife and toddler, was taken to a hospital where he required stitches to his face.

The frightening assault on the 33-year-old man began around 1:30 p.m. Sunday on Manhattan’s West Side Highway and was partially captured on a helmet-mounted video camera worn by one of the riders involved in the chase.

A portion of the video posted on the Internet by an unidentified user shows a large group of bikers swarming around the Range Rover as it heads north on the highway. One of the bikers then moves into the SUV’s lane and rides briefly alongside the vehicle, peering in through the driver’s side window. It isn’t clear from the video what the driver might have done to anger the motorcyclist.

The biker then cuts in front of the Range Rover and, still staring at the driver, suddenly slows down. It isn’t captured on the video, but the motorcycle and SUV bumped, police said.

The motorcyclists, 20 to 30 in all, then come to a complete halt on the highway, blocking the SUV’s path. Some dismount and approach the vehicle. Police said some of the bikers then began damaging the Range Rover, which isn’t clear from the video.

The video shows the SUV suddenly accelerating, bouncing over at least one of the motorcycles and its rider as others scramble to get out of the way. The cyclists give chase, pursuing the driver for about 2 1/2 miles. At one point, the bikers succeed in getting the SUV to stop. One ripped open the driver’s door, but he sped away.

The chase ended when the SUV exited the highway and got stuck in traffic on a city street. The video shows one biker using his helmet to smash the driver’s window. Police said the group then pulled the man from the SUV and beat him, although that part isn’t shown on the recording posted online. The police department confirmed that the video circulating online is authentic.

Police didn’t identify the driver, who was not charged. His wife and child were not injured.

On Tuesday, police arrested the biker who was involved in the initial accident. He was charged with reckless endangerment, reckless driving, endangering the welfare of a child and menacing. He was not injured.

Police distributed images of two bikers they said were involved in the chase and said they were wanted for assault.

Police believe some of the bikers belong to a gang known as Hollywood Stuntz. They said the motorcyclists were part of a planned but unauthorized event in which hundreds of riders gathered outside of Manhattan, with the intent of driving into Times Square en masse.