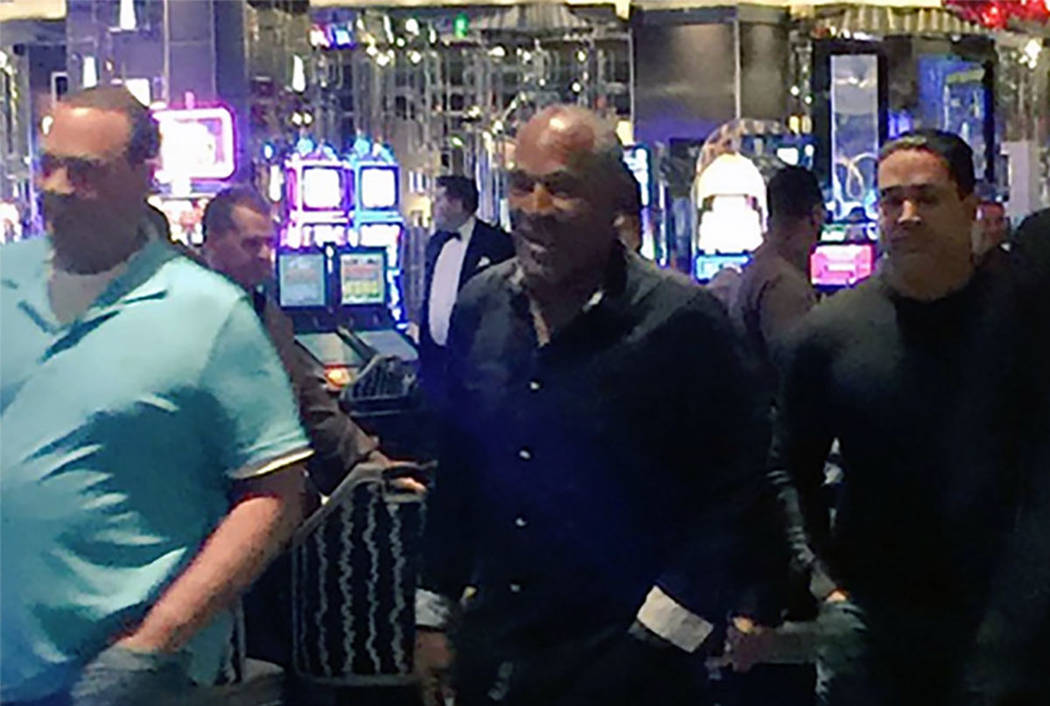 O.J. Simpson, seen at The Cosmopolitan in 2017 (screengrab from Brian Munz‏ on Twitter)

O.J. Simpson alleges in a lawsuit filed Thursday that employees of The Cosmopolitan of Las Vegas defamed him when they told TMZ he was kicked out of the hotel-casino “for belligerence” in November 2017.

The complaint alleges that employees’ defamation of Simpson led to the tabloid news site TMZ reporting the infamous former football star “was drunk and became disruptive” at the hotel-casino’s Clique bar on Nov. 8, 2017.

“The alleged reports that are circulating are inaccurate,” The Cosmopolitan said in a statement in November 2017, adding that it did not comment on patron information. It said Thursday that “as a matter of company policy, we do not comment on pending litigation.”

According to the complaint, the TMZ article “specifically states that ‘(h)otel staff tells TMZ’ was the basis for the report.” The TMZ article reported that Simpson was “angry at hotel staff and glasses broke at the bar.”

The lawsuit said that Simpson, who is characterized as a “well-known public figure” who “has experienced various legal problems,” had been to The Cosmopolitan multiple times. On Nov. 8, 2017, Simpson was eating at the STK Las Vegas and went to the Clique bar after.

Simpson denied being intoxicated, acting “belligerent” toward anyone, breaking glass or destroying property. As Simpson was leaving the bar, “he and his friends were approached by security at the Cosmopolitan, without incident,” the complaint said.

After leaving the bar, the group went to the hotel’s basement parking lot, where a “person representing to be security” issued Simpson a trespass notice.

“To date, the Cosmopolitan has never issued any public rationale or reasoning for trespassing Simpson from the property, other than claiming it was ‘private’ property the night of the issuance of the trespass notice,” the complaint said.

The next day, Simpson completed a drug and alcohol test for his parole officer. The Nevada Department of Parole and Probation later found that Simpson had not violated any terms of his probation and “determined that the Cosmopolitan’s assertions against Simpson were false,” according to the complaint.

Simpson was granted parole in July 2017 after serving almost nine years for a 2007 robbery at a Palace Station hotel room. He was convicted of taking memorabilia that he said was stolen from him, and Simpson has claimed he was trying to get personal items and family photos.

The robbery happened 12 years after Simpson was found not guilty of the slayings of Nicole Brown Simpson and Ron Goldman.

Thursday’s complaint alleged that The Cosmopolitan fabricated the story of Simpson becoming belligerent to keep him off the property and to “paint Simpson in a false light by defaming and embarrassing him.”

Simpson previously threatened to sue the hotel-casino in January 2018, when his attorney sent a letter to media outlets saying that “casino staff, employees, agents, and other higher-level decision makers or affiliates, including STK Las Vegas and Clique Bar &Lounge, acted with malice and racial prejudice” toward Simpson.

That letter said that Simpson could sue for at least $100 million.

According to the complaint filed Thursday, Simpson seeks at least $30,000 and undetermined punitive damages and attorney’s fees.

The complaint said that Simpson is a “model” parolee and citizen in Las Vegas, “where he has received an extremely warm and positive reception by many who desire ‘selfie’ photos taken on smartphones.”