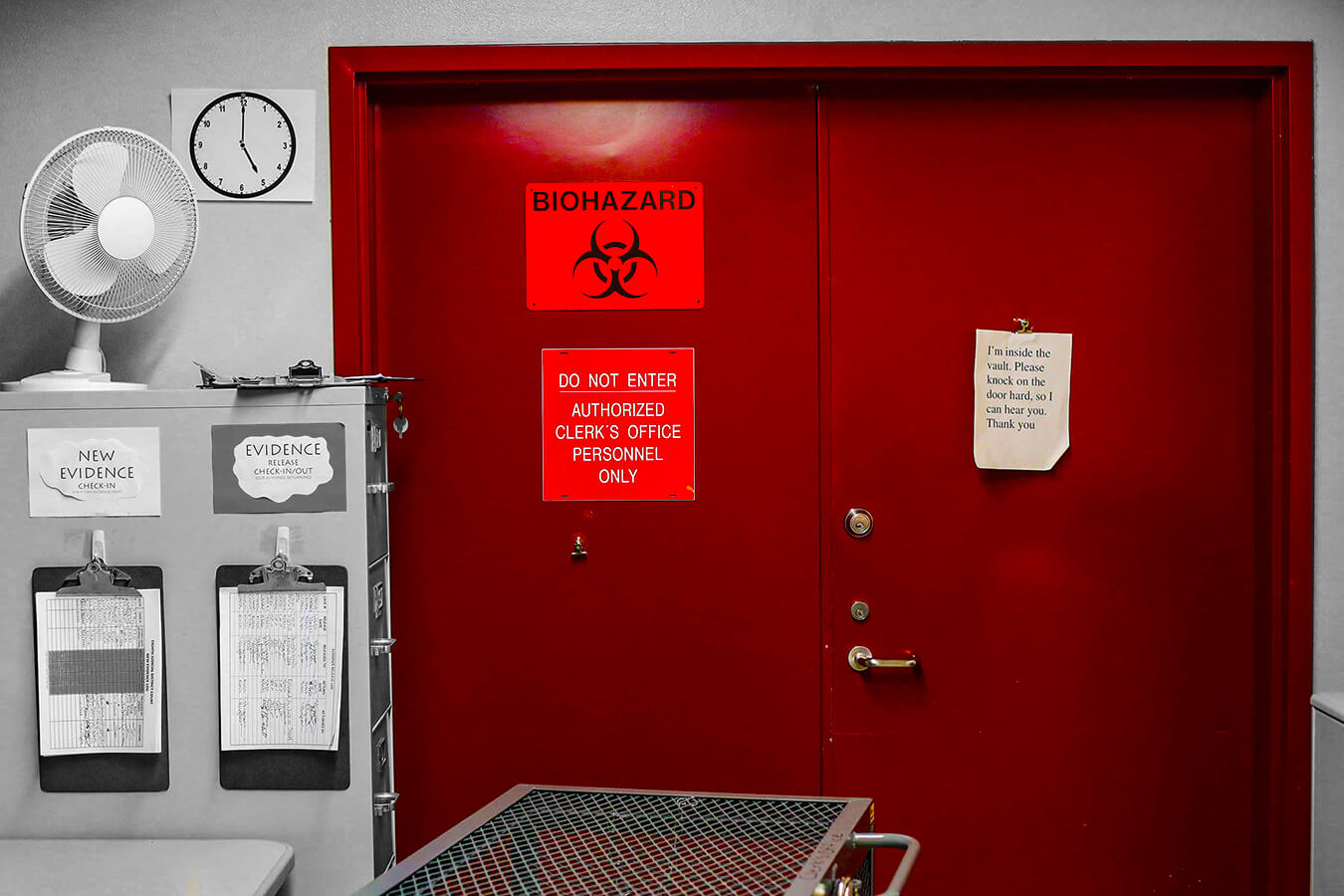 Inside Clark County District Court’s evidence vault
The door to the evidence vault at the Regional Justice Center on Aug. 10, 2021, in downtown Las Vegas. (Rachel Aston/Las Vegas Review-Journal) @rookie__rae
From a vast array of weapons to a large swingset, evidence stored at the Regional Justice Center brings some of Las Vegas’ most famous court cases to life.
By Briana Erickson Las Vegas Review-Journal

Murder weapons are behind these red doors, and the belongings of the murdered, too. The bottle of sangria found at the scene of a sexual assault is safely stored near the 100-foot-long swingset that crushed a boy’s skull, leading to a $20 million civil judgment.

The oldest exhibit is nearly 50 years old, and new evidence is always coming in.

It all gets boxed up on the fourth floor of the Regional Justice Center, where it is stored in what is known as the evidence vault. No one other than court personnel may pass through the red doors that lead to it. 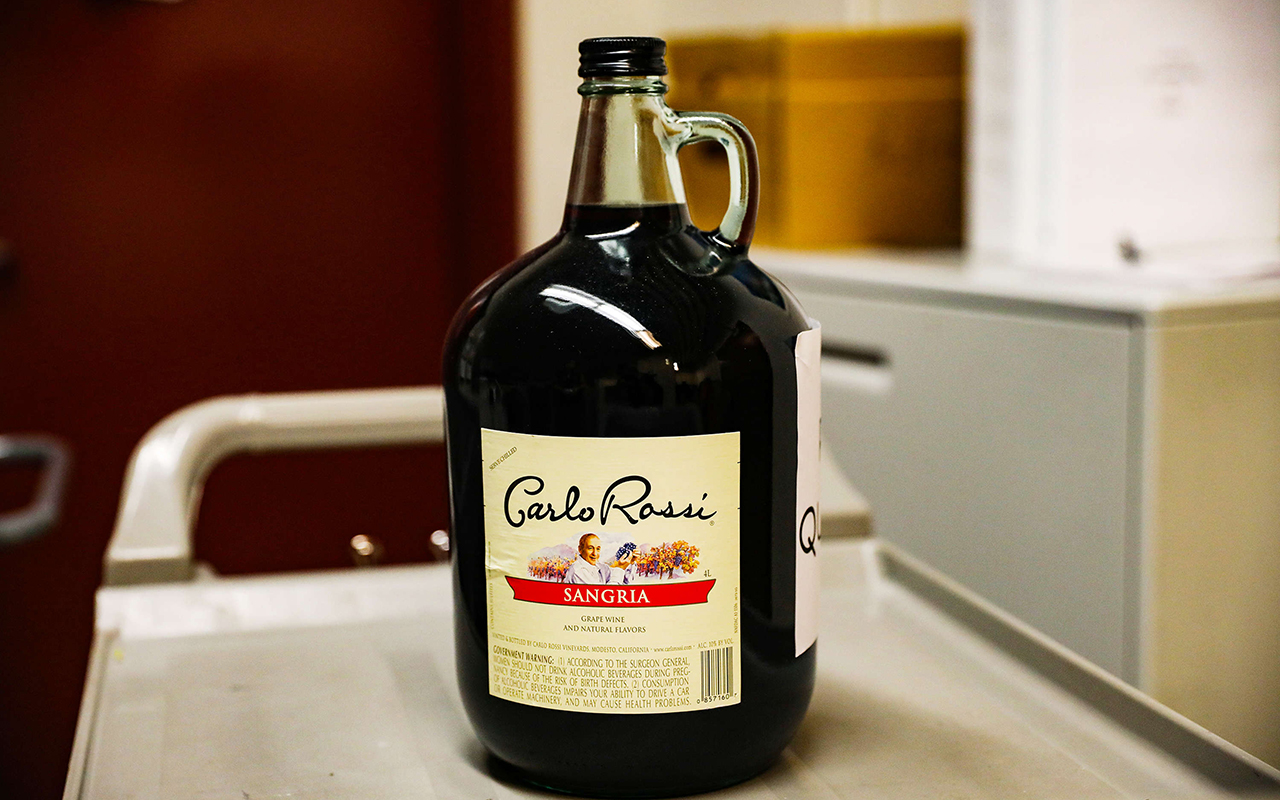 A bottle of sangria that is evidence in a sexual assault case sits outside the evidence vault at the Regional Justice Center on Aug. 10, 2021. (Rachel Aston/Las Vegas Review-Journal) @rookie__rae

The thousands of pieces of evidence kept from Clark County court cases are in sealed envelopes and shrink-wrapped enclosures.

They are collected, logged, recorded and stored in the cold room, where it is kept safe until enough time has passed that it can be destroyed, or until the defendant dies.

Here are some of the stories from the shelves: 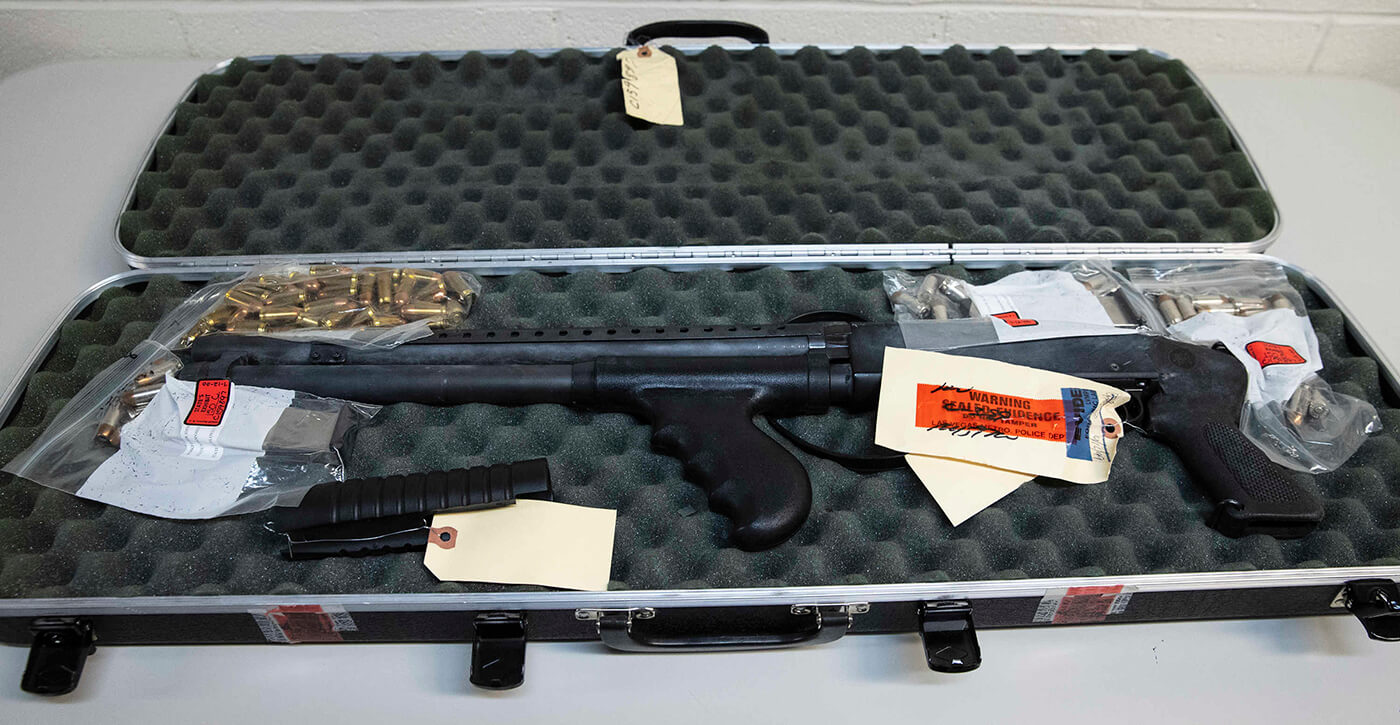 A 12-gauge shotgun that was used by 23-year-old Zane Floyd is displayed at the Regional Justice Center's evidence vault on Aug. 20, 2021. Floyd shot everyone he encountered after walking into an Albertsons on West Sahara Avenue on June 3, 1999. (Bizuayehu Tesfaye/Las Vegas Review-Journal) @bizutesfaye 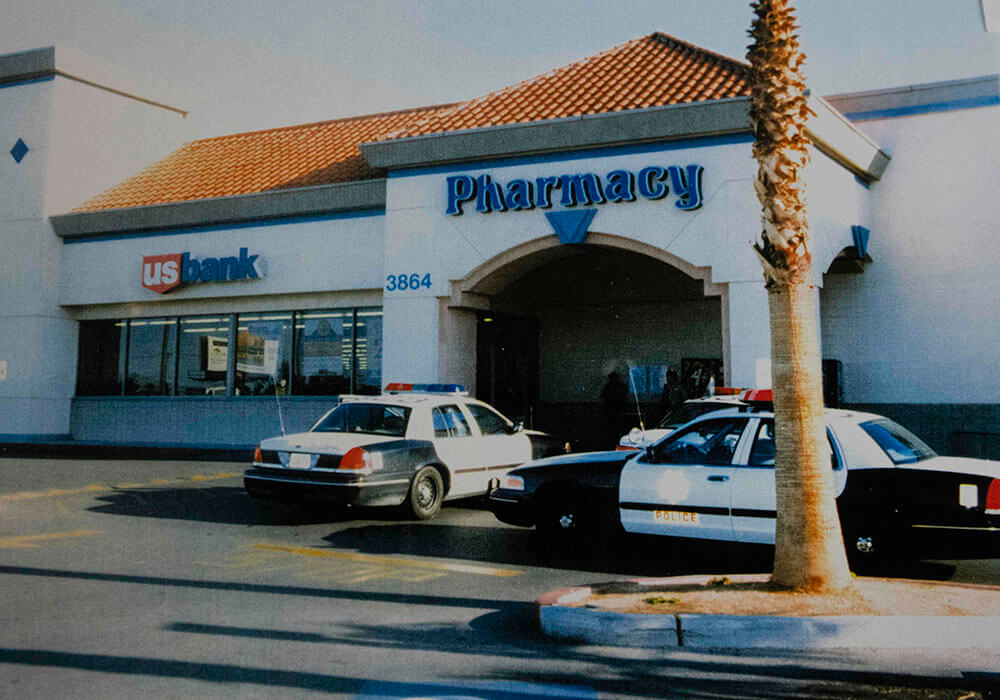 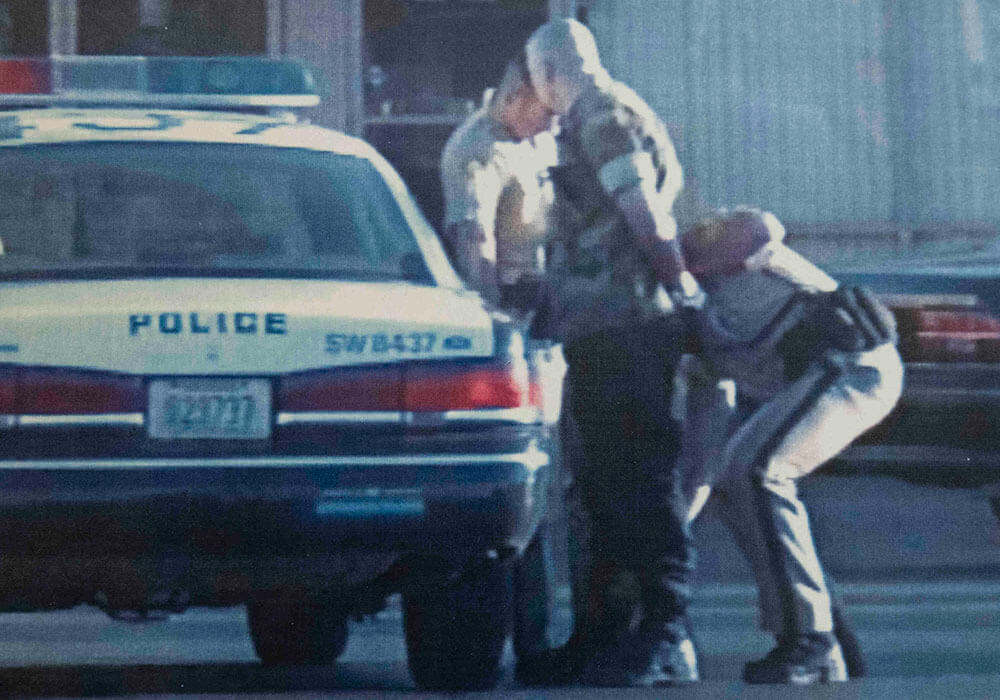 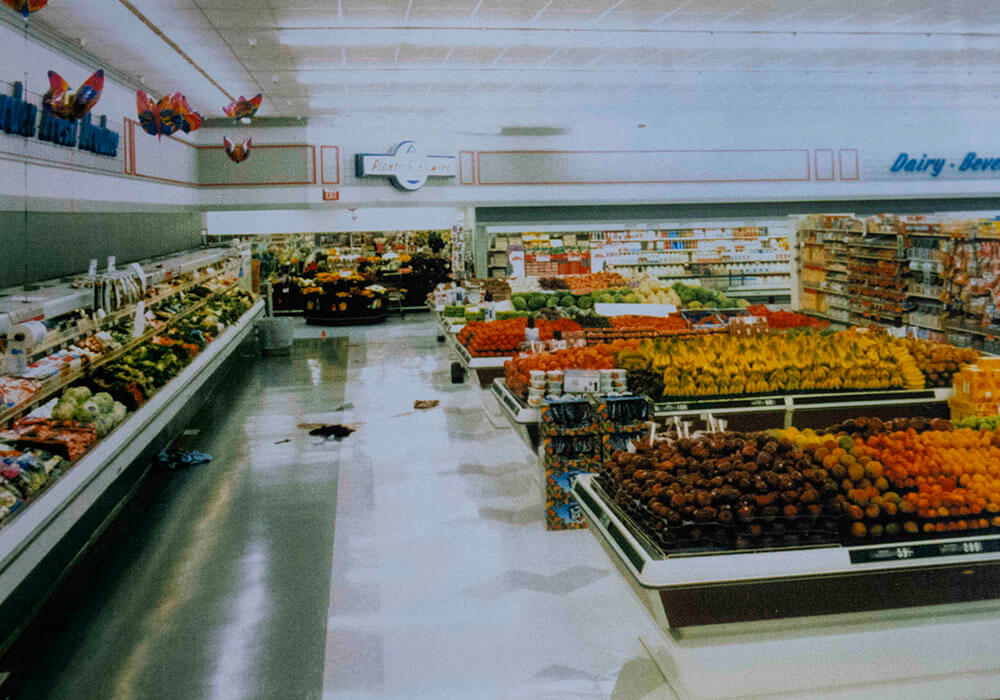 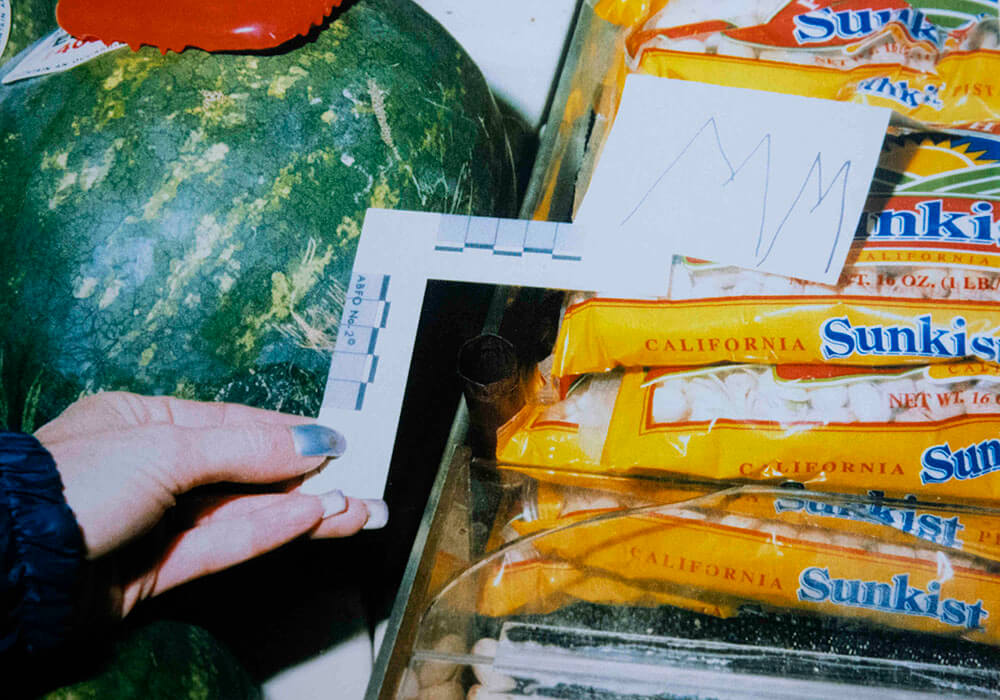 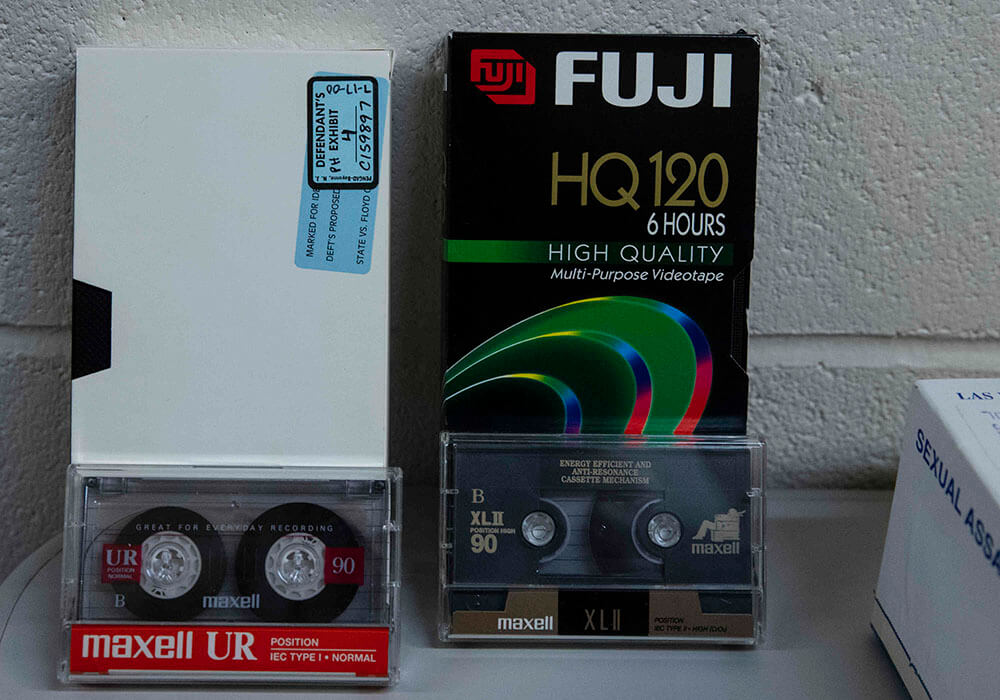 The evidence in the mass shooting at a Las Vegas Albertsons in June 1999 is kept wrapped in two boxes marked with a green “DEATH PENALTY” sticker.

Under a black gun case is a 12-gauge shotgun. An array of cartridges, magazines and bullets are also categorized.

Zane Floyd, now 46, walked into an Albertsons on West Sahara Avenue, dressed in military fatigues and armed with the shotgun hidden under his robe.

Floyd is on Nevada’s death row for the deadly shooting. Evidence of the carnage are VHS tapes of his arrest and supermarket surveillance video.

Photos also show grocery displays with punctured watermelons and bullet holes in packages of Oreos and between loaves of whole-grain bread. They show his military-style vest, wallet and Marine Corps ID. 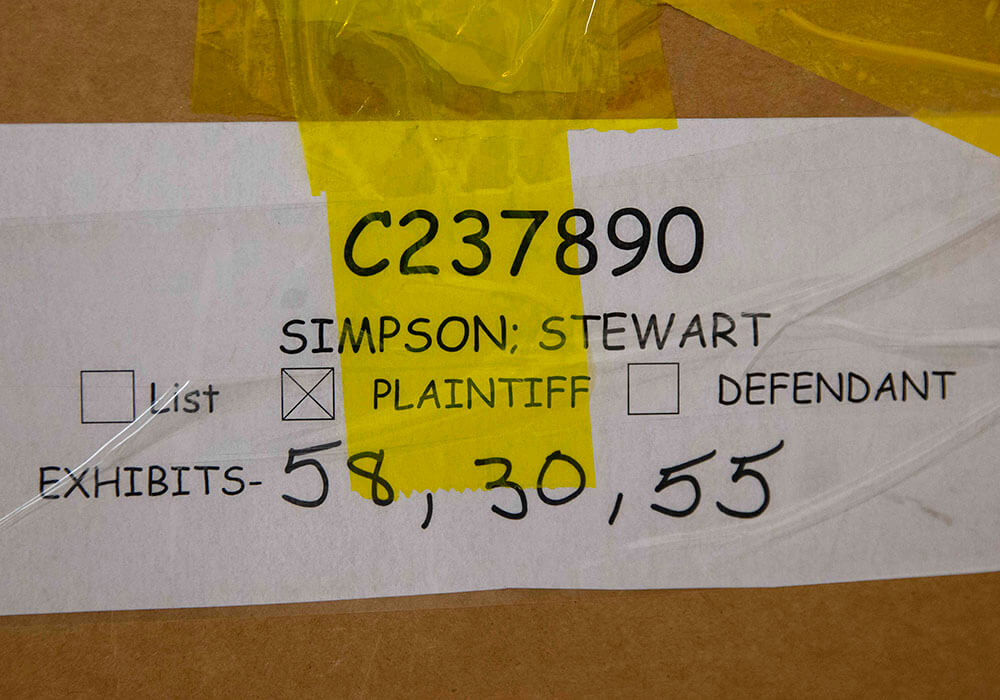 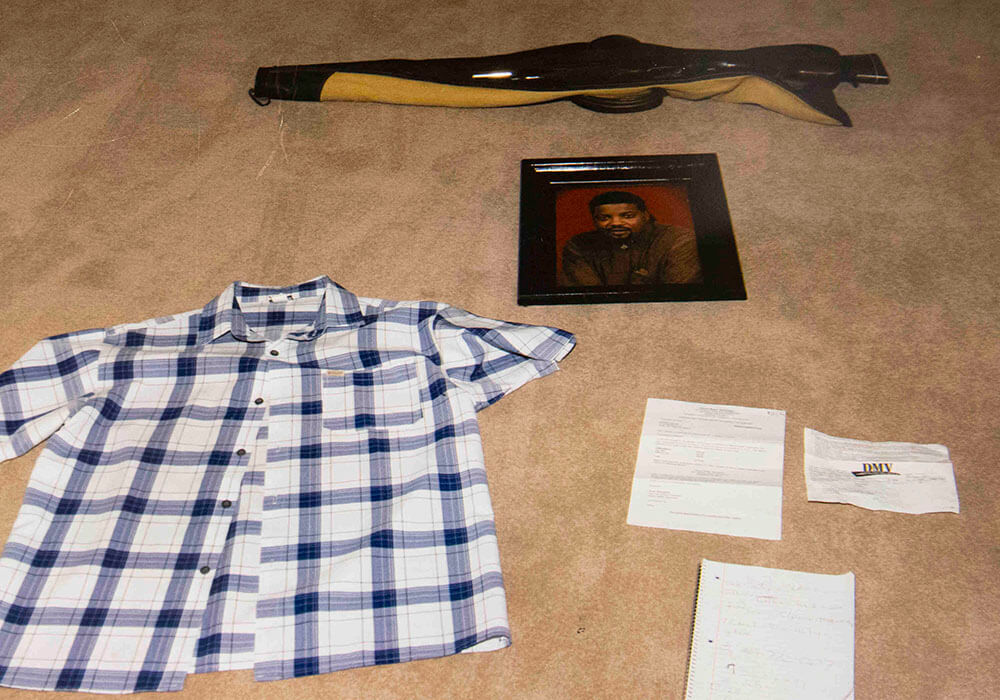 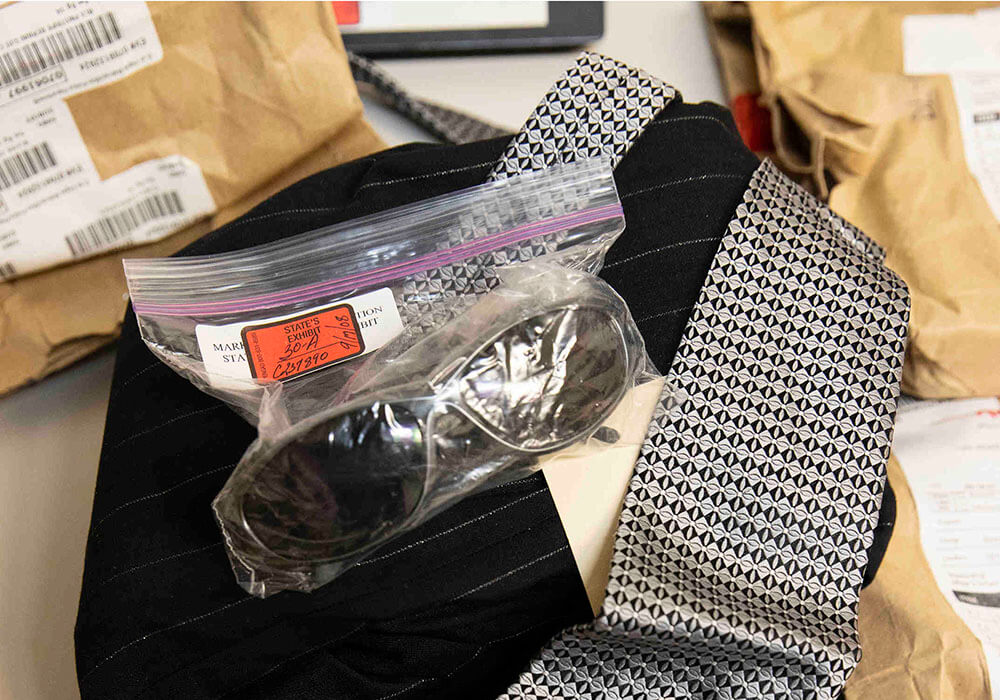 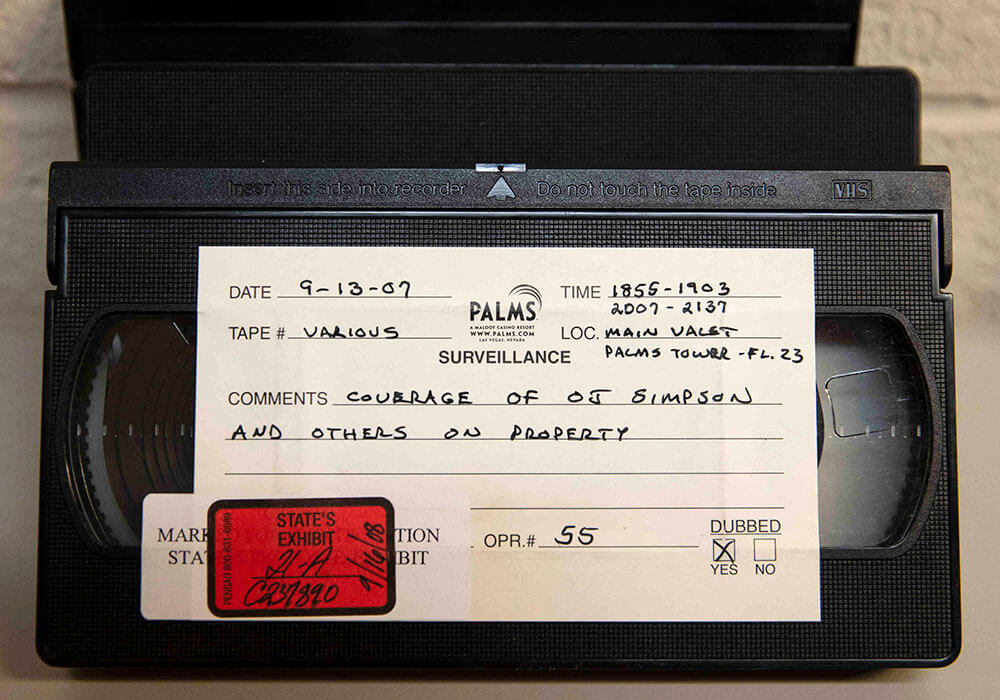 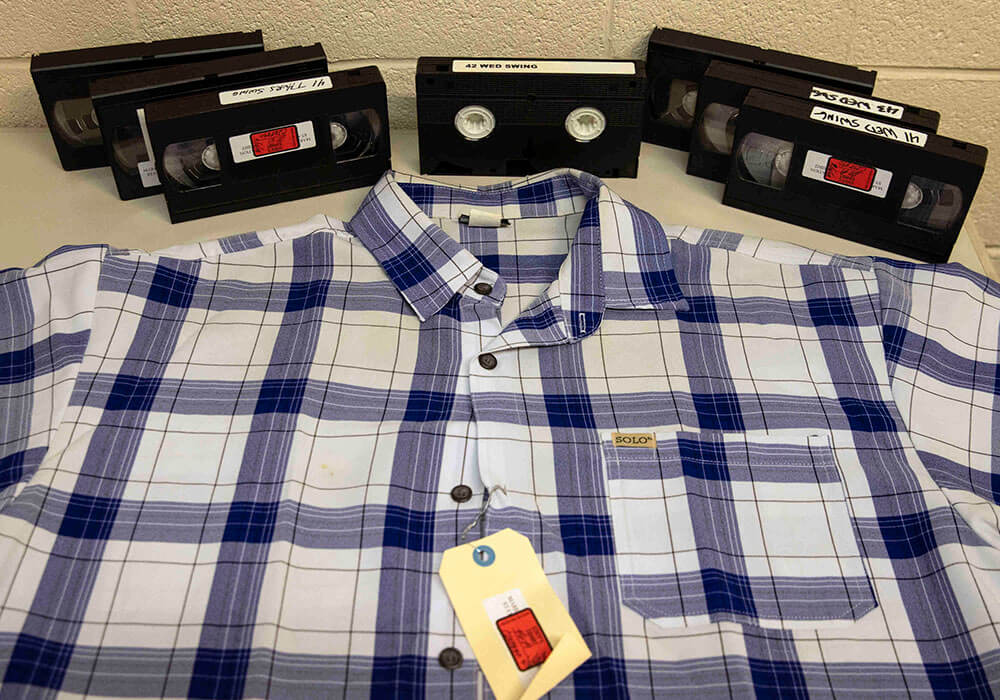 O.J. Simpson was infamously convicted of raiding a Palace Station hotel room and served nine years of a 33-year sentence in prison for armed robbery and kidnapping. He was released in 2017.

Simpson was part of a group that attempted to steal sports memorabilia at gunpoint in 2007. Simpson, a former player for the Buffalo Bills, said the items belonged to him.

The memorabilia has been returned to its owners and removed from the evidence vault. But boxes of evidence contain items such as a portrait of Clarence Stewart, one of the co-defendants in the case.

They also contain a large blue-and-white plaid shirt that is not labeled, as well as a pair of black sunglasses, a large white long-sleeved dress shirt, a tie and a black pinstriped suit belonging to Walter Alexander, another co-defendant.

Surveillance video from the Palms titled “coverage of OJ Simpson and others on property” shows the valet area on Sept. 13, 2007.

Also included in an evidence box are juror notes with questions that were read to witnesses during the trial: Why did OJ give you the football? Did he hire you as his bodyguard? 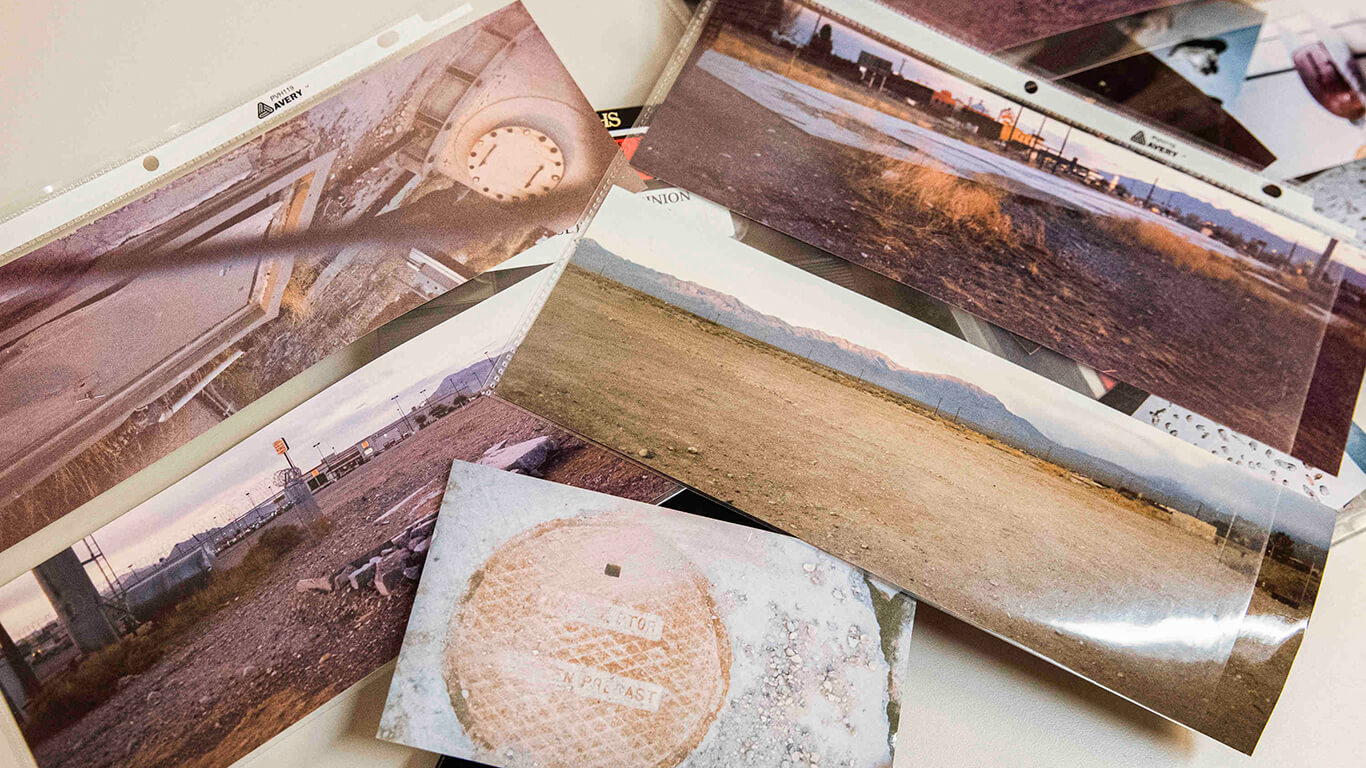 Photographs that were used as evidence during Ted Binion's murder trial are displayed at the Regional Justice Center on Aug. 20, 2021. Binion's body was found on the floor of the den in his 6,700-square-foot home on Palomino Lane in 1998. (Bizuayehu Tesfaye/Las Vegas Review-Journal) @bizutesfaye

The state of Nevada v. Rick Tabish and Sandy Murphy 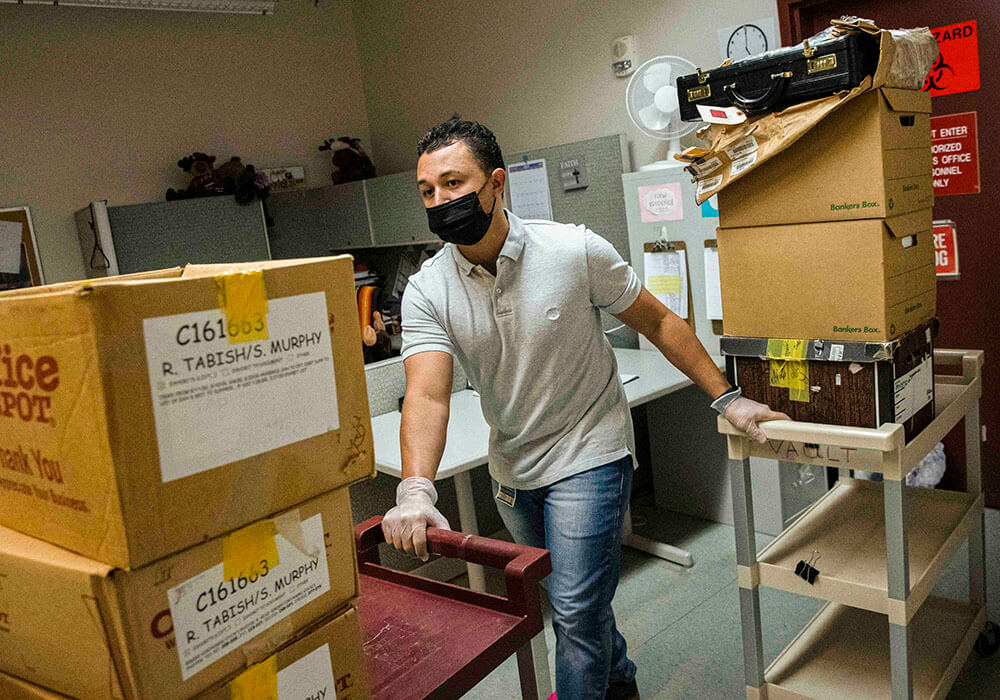 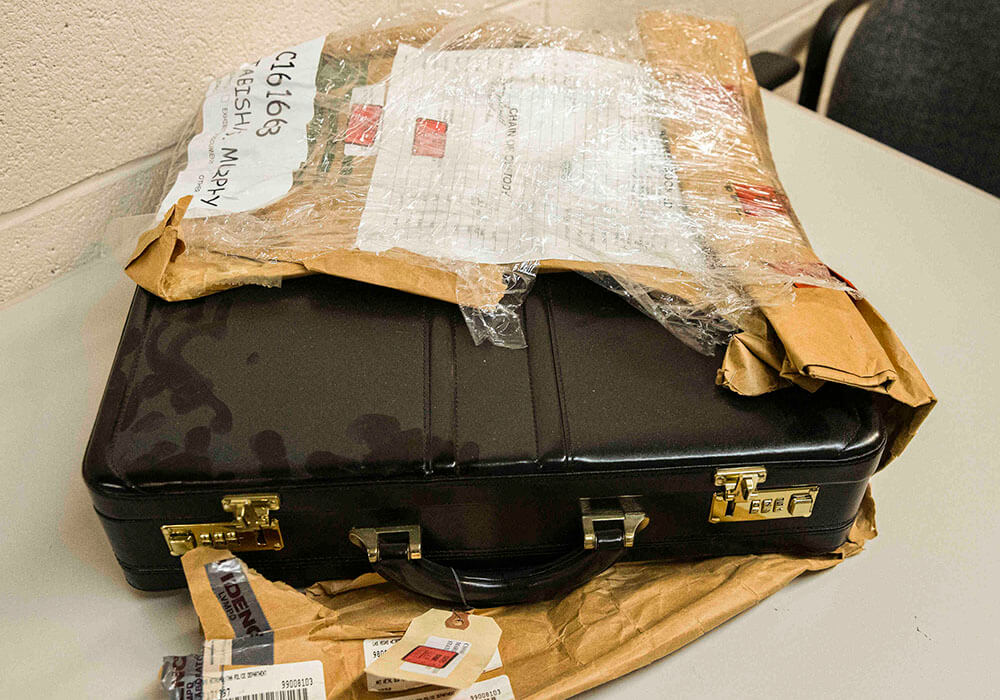 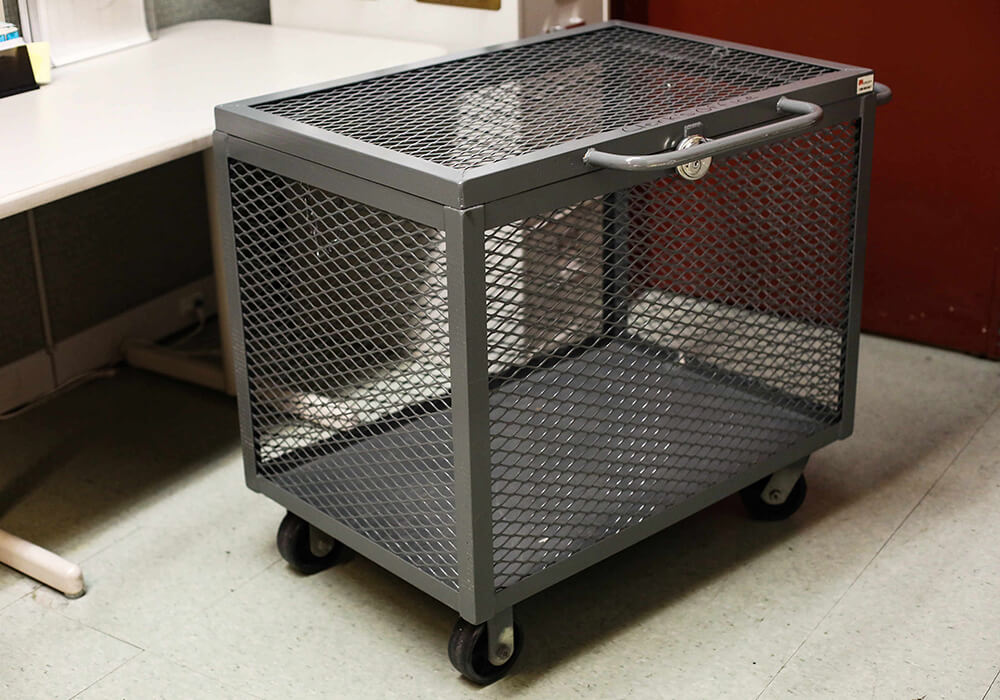 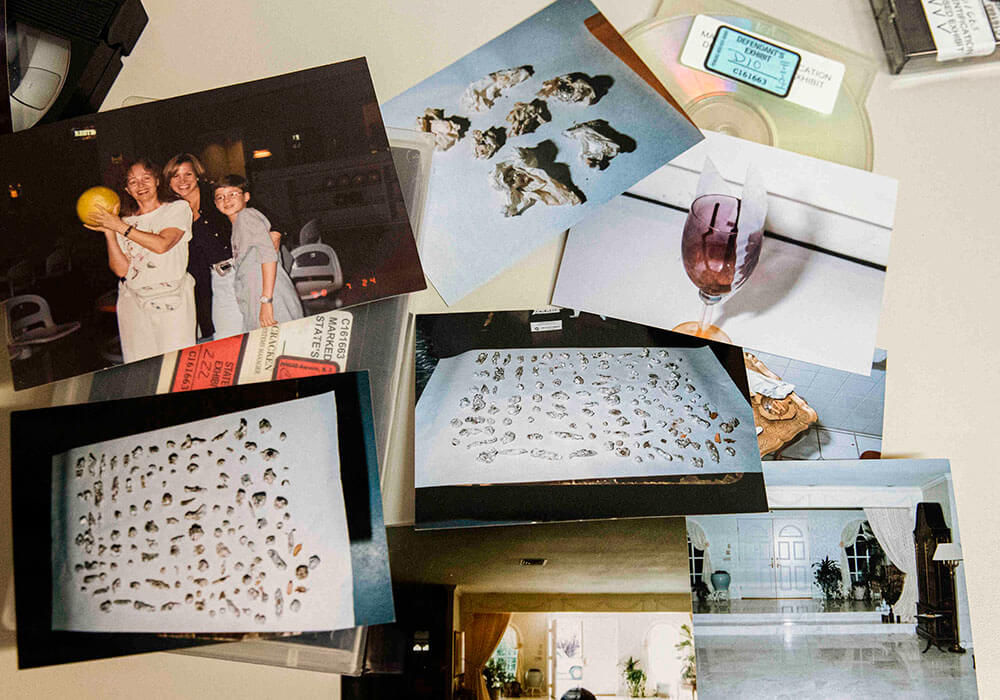 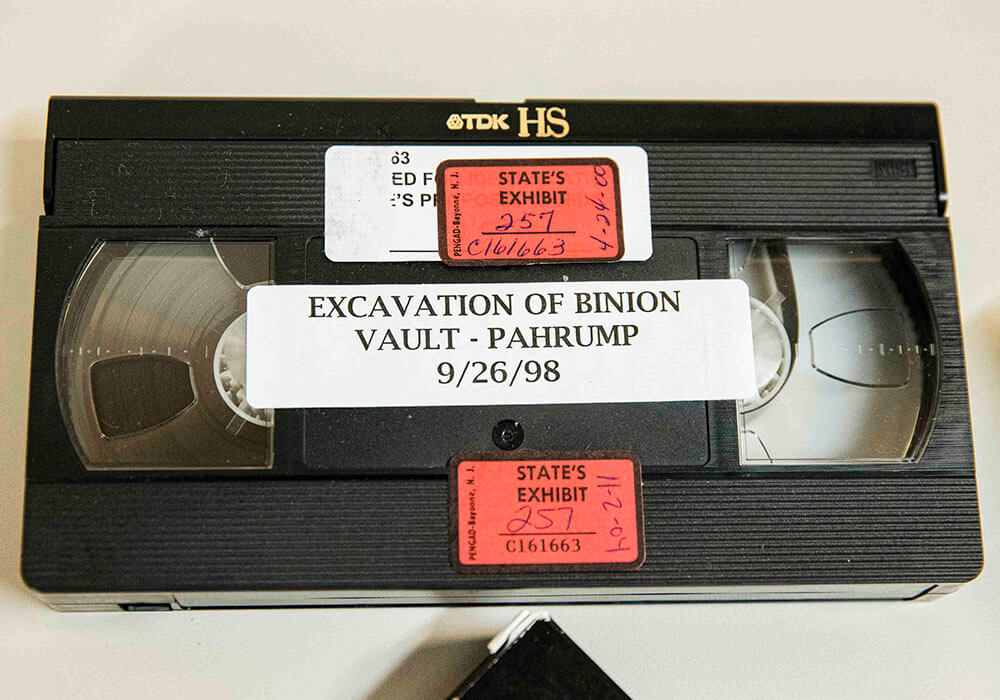 The death of Las Vegas casino boss Ted Binion became known as the city’s “trial of the century.”

Binion, the heir to the Horseshoe Club fortune, was 55 when he was found face up after overdosing on heroin and Xanax.

The powerful mogul was known to surround himself with guns, heroin and mobsters. But prosecutors blamed his death on his girlfriend and her new lover.

Sandy Murphy and Rick Tabish were convicted and then acquitted of his murder.

Prosecutors presented evidence that Tabish rushed to Pahrump, where Binion had stored $6 million worth of silver. Pictures of bricks of cash are also shown.

Binion dealt in bricks of cold cash and stored the buried treasure, which is pictured in bags. The cage in which the silver was kept also remains in the evidence vault, as does a black briefcase and photos of Binion’s home on Palomino Lane, including a picture of a glass of red wine and handwritten cards on his bedside table.

One, a Valentine’s Day card, read, “You are one of the four dearest people to me and I love you.” 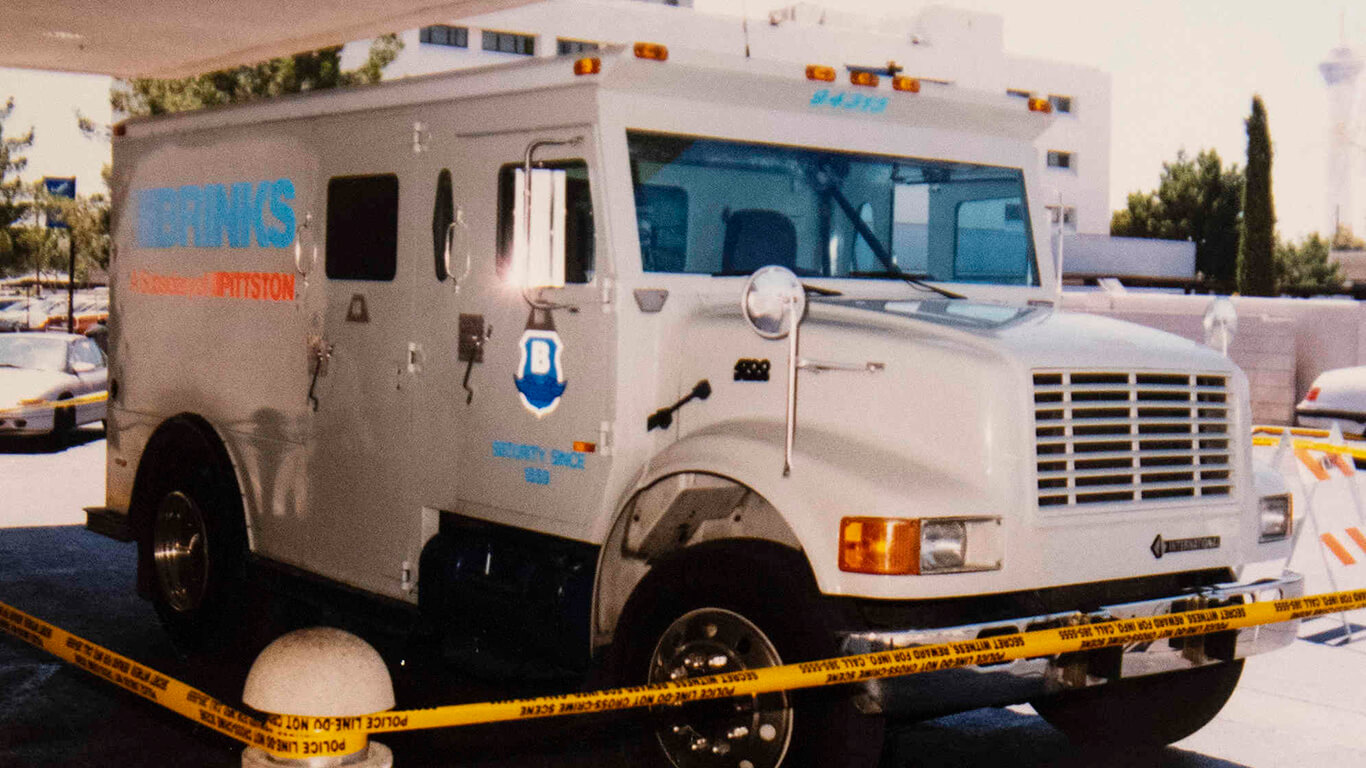 A photograph of a Brinks truck is displayed outside the evidence vault at the Regional Justice Center on Sep. 15, 2021. It was used as evidence during the robbery and double murder case against Jose Vigoa in the early 2000s. (Bizuayehu Tesfaye/Las Vegas Review-Journal) @bizutesfaye 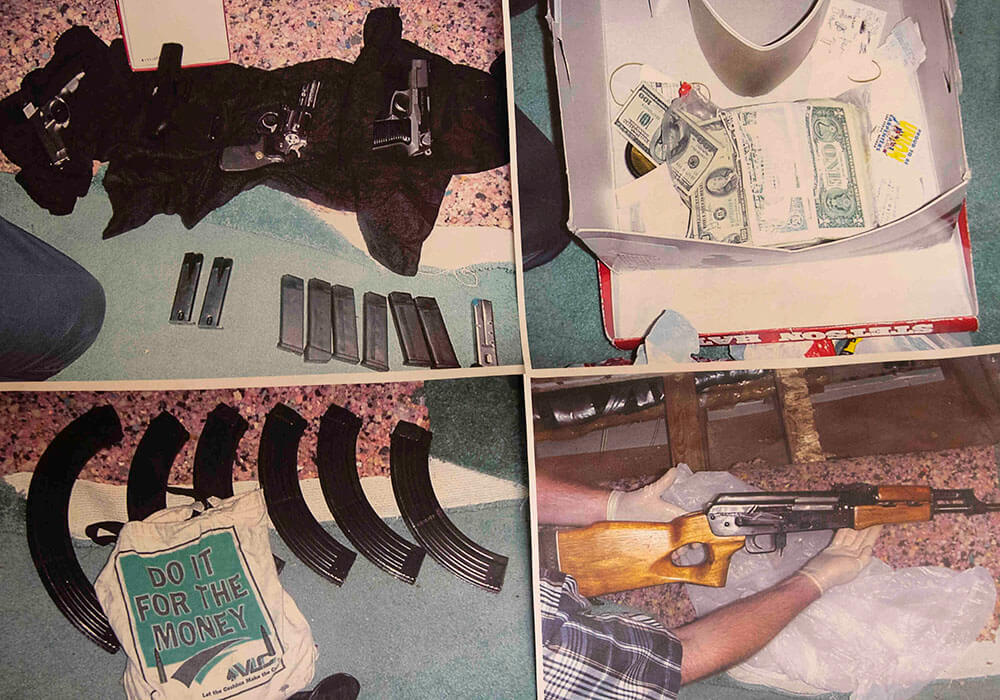 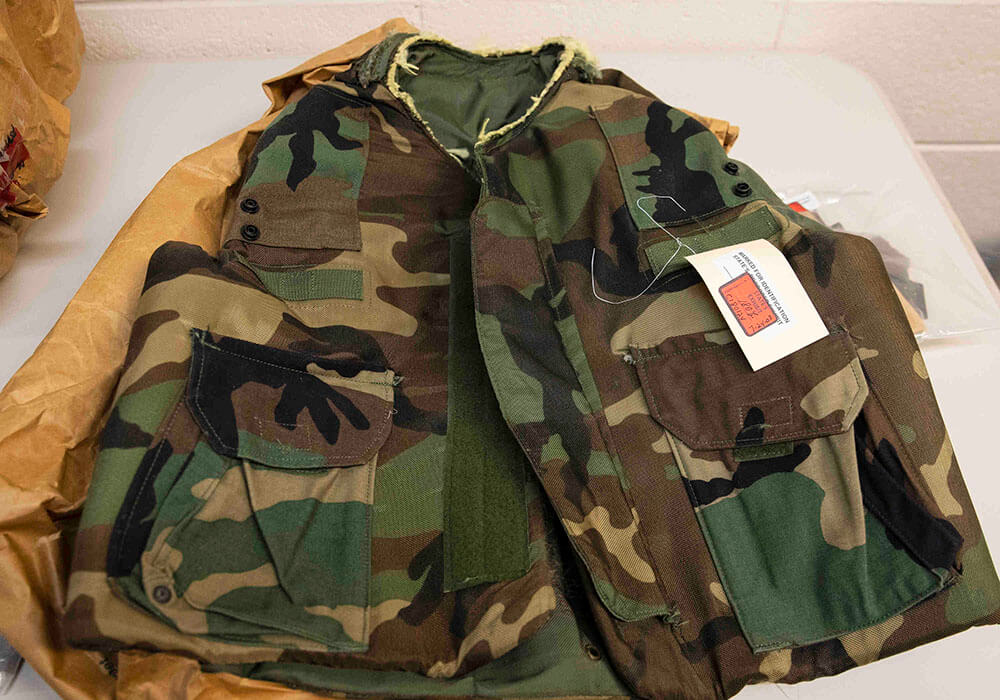 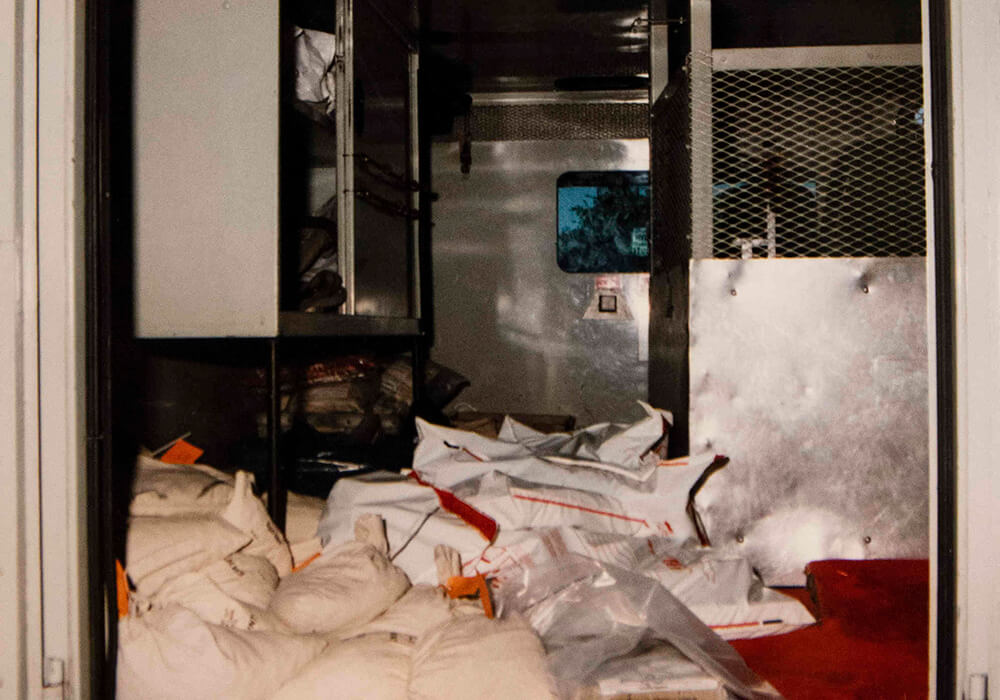 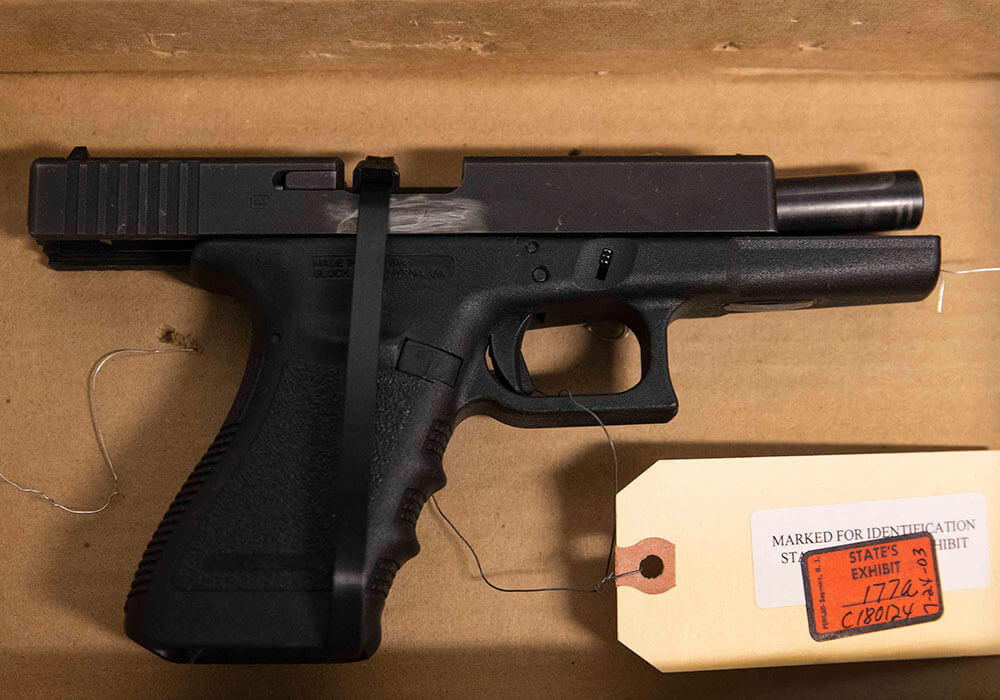 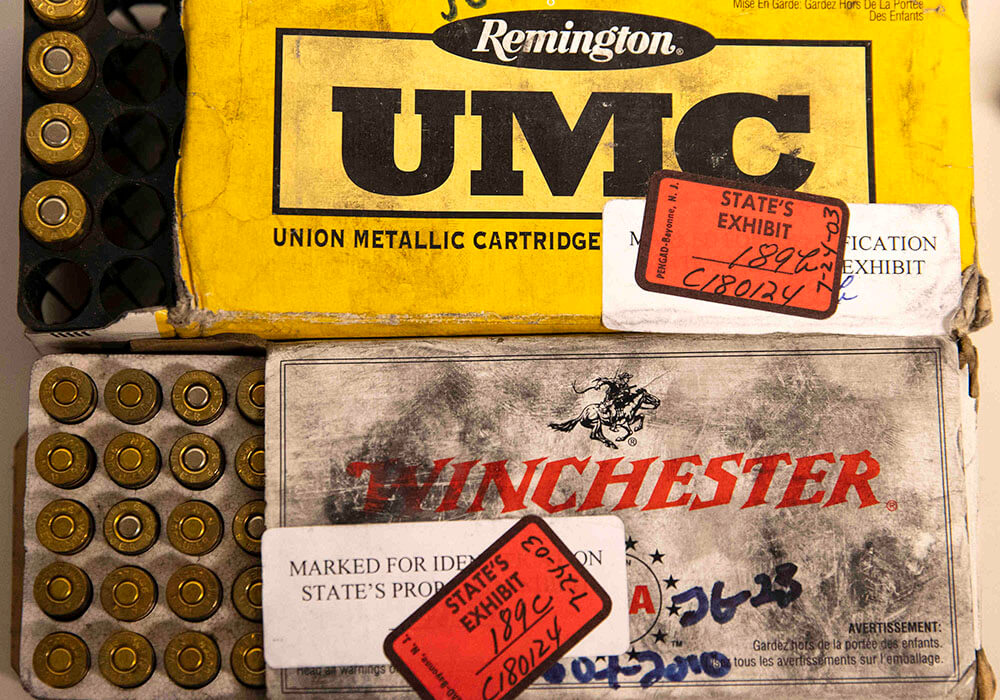 Jose Vigoa, now 61, is believed to be the mastermind behind a string of casino robberies that plagued the Strip.

Vigoa was once described by then-Chief Deputy District Attorney David Roger as “one of the most dangerous criminals in the history of Clark County.”

In this case, he was convicted in a series of daring robberies and the March 2000 deaths of two armored truck drivers outside Ross Dress for Less in Henderson. He received four life sentences with no chance of parole.

Authorities say the robberies occurred at the MGM Grand, Mandalay Bay, Bellagio and Desert Inn. At the Bellagio, two men wearing body armor jumped the cashier cage counters and stole about $160,000 in cash and casino chips.

Vigoa's brother-in-law Pedro Duarte, 58, was convicted of two counts of robbery and two counts of attempted murder and is out on parole.

Oscar Sanchez Cisneros, another brother-in-law, confessed to the murders and robberies and died by suicide in October 2000 while at the Clark County Detention Center.

Another defendant, Luis Suarez, pleaded guilty to a single count of robbery in the 2000 Bellagio heist.

John Huddy’s 2008 book, “Storming Las Vegas,” delved into Vigoa’s shadowy past: Raised in Cuba, he became a Soviet-trained commando who fought in Afghanistan.

Evidence in the case shows an arsenal of weapons and ammunition ready for a heist.

Also shown are two other handguns and pictures of cash, shotguns and a green bag that says “Do it for the money.” 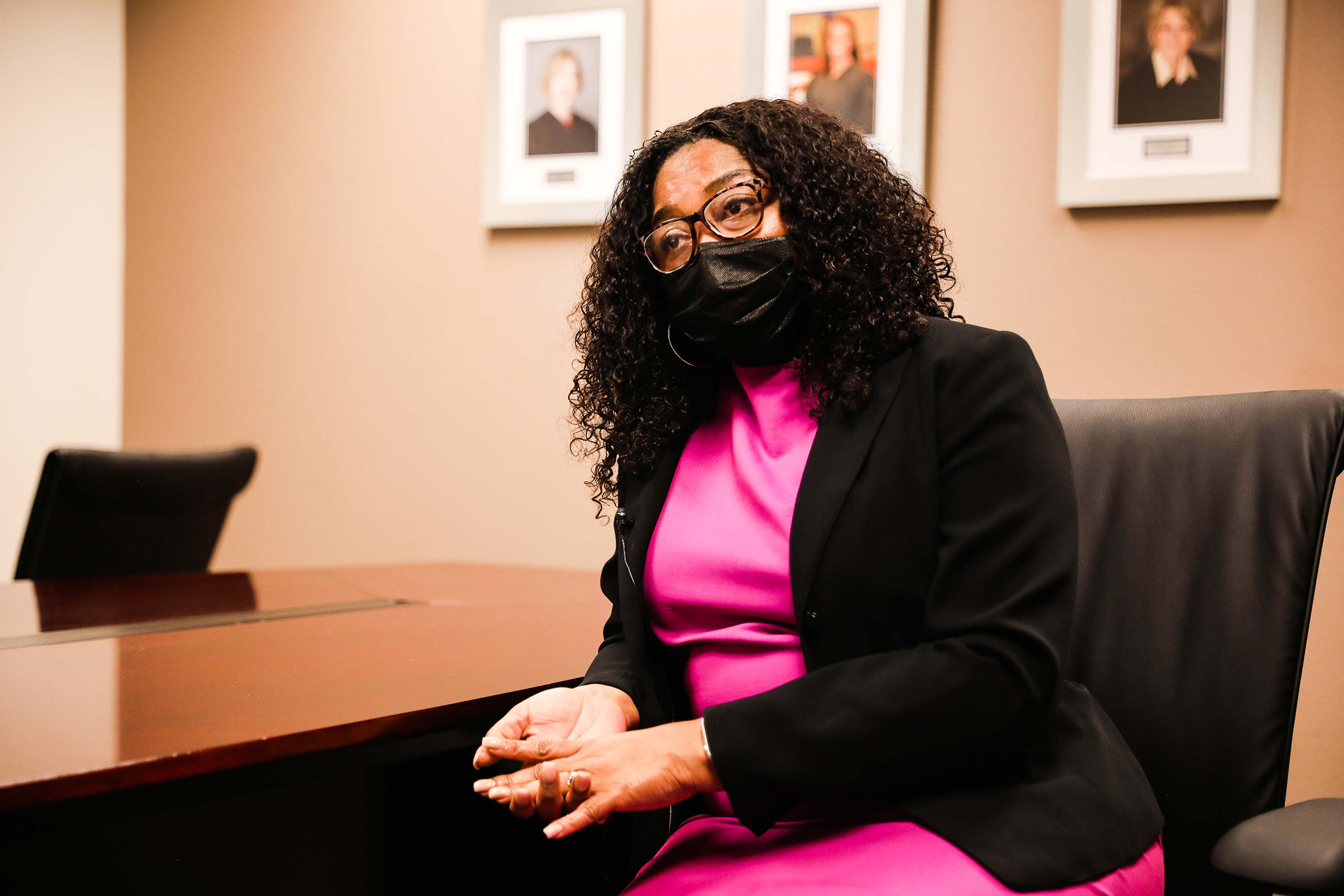 Michelle Jones speaks to the Review-Journal about her job as the civil and criminal courtroom clerk supervisor on Aug. 10, 2021. (Rachel Aston/Las Vegas Review-Journal) @rookie__rae 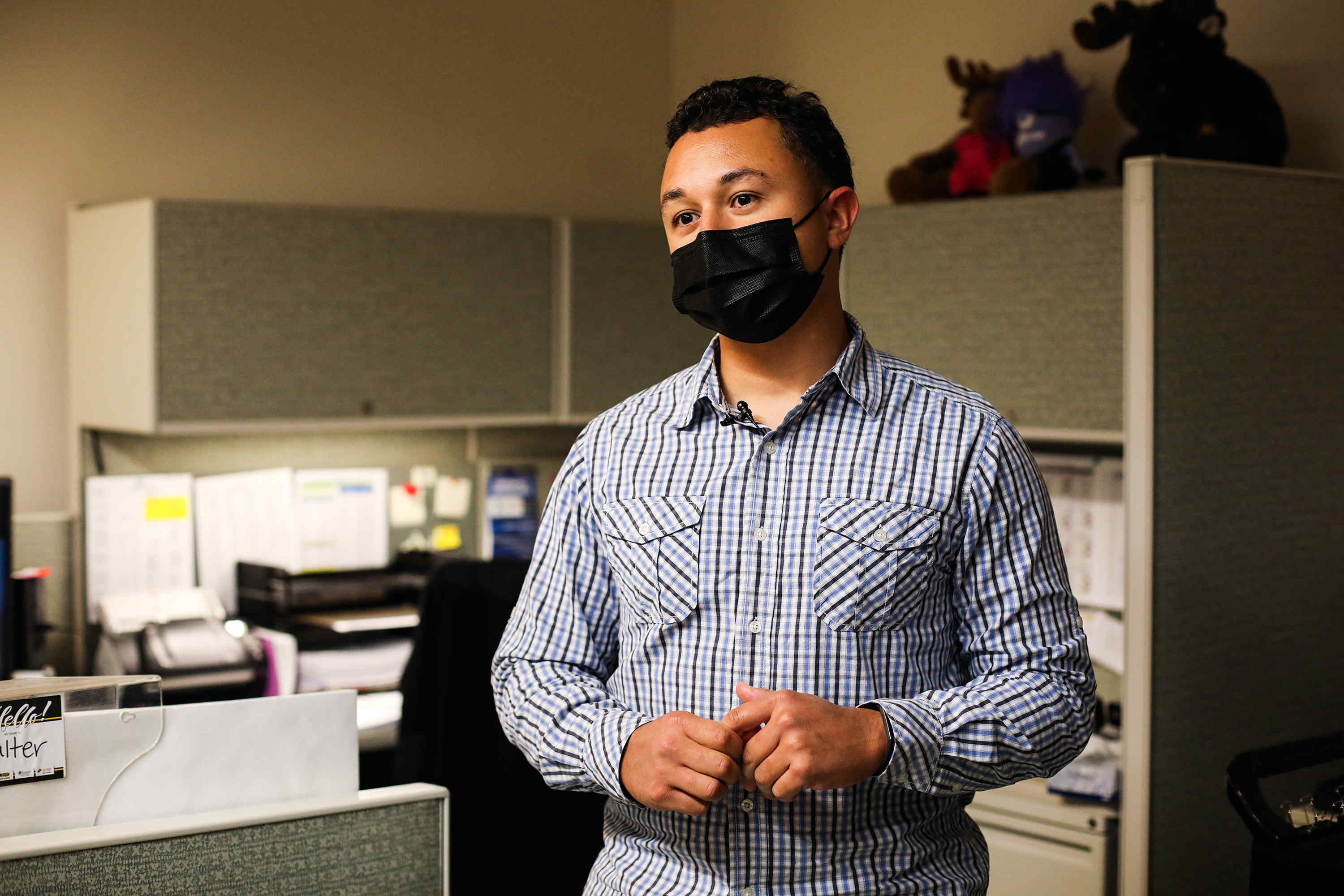 Walter Abrego-Bonilla speaks to the Review-Journal about his job as a records technician on Aug. 10, 2021. (Rachel Aston/Las Vegas Review-Journal) @rookie__rae

During the judicial process, court clerks check out evidence and safeguard it. The vault technician, Walter Abrego-Bonilla, processes it.

Keeping track of it all is so critical to upholding justice that they call it “maintaining the chain of custody.”

“The courtroom clerks are the actual keepers of the record,” said Michelle Jones, courtroom clerk supervisor. “We have to do whatever it takes to make sure that we ensure that this evidence is protected.”

In 2005, Jones and other county staffers formed a human chain from the old Clark County Courthouse on Third Street to the new Regional Justice Center at 200 Lewis Ave.

They were strategically placed feet away from each other and stood for about eight hours as the shrink-wrapped evidence was brought out on carts and safely secured in the new vault.

Thousands of pieces of evidence from Clark County District Court cases are kept in rows of shelves at the vault.

“I’m just amazed at how much stuff we are holding,” Jones said. “How much history that we have there.” 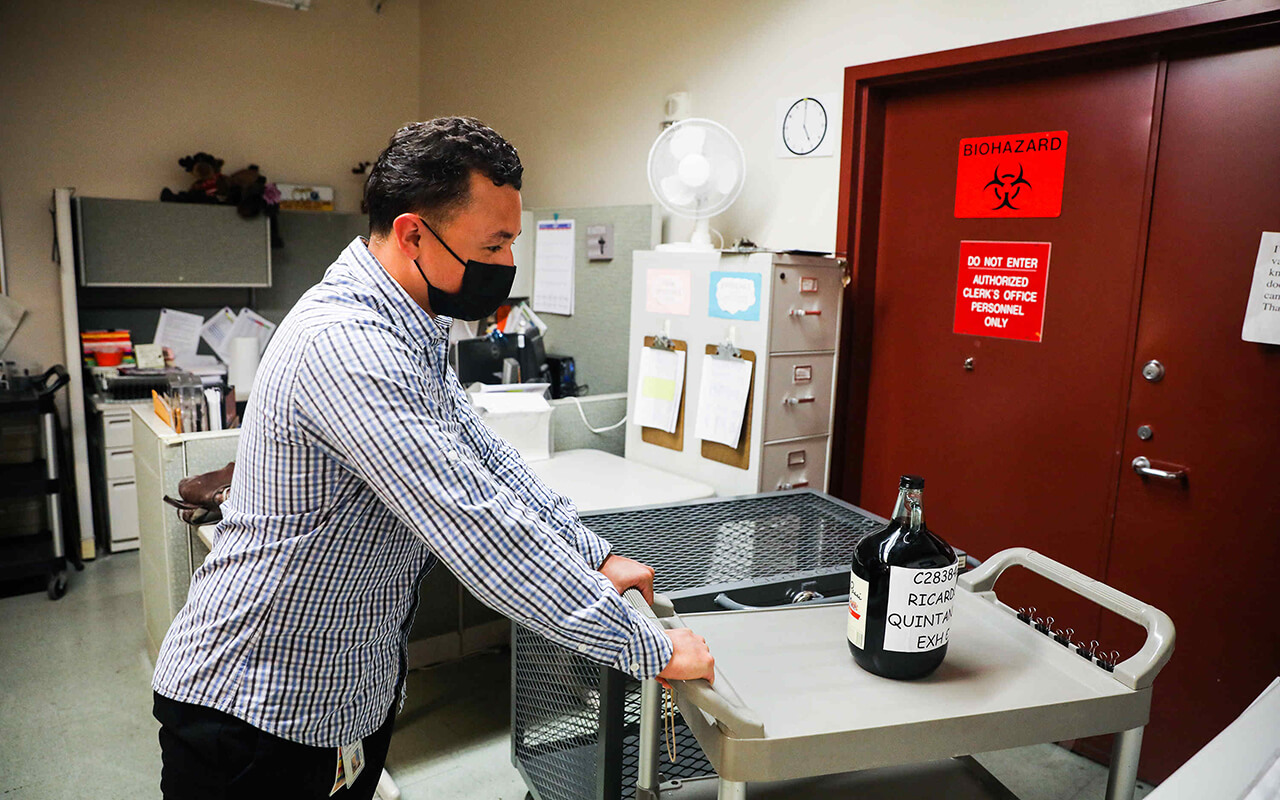 Walter Abrego-Bonilla, records technician, moves a bottle of sangria that is evidence in a sexual assault case outside the evidence vault at the Regional Justice Center on Aug. 10, 2021. (Rachel Aston/Las Vegas Review-Journal) @rookie__rae

By Briana Erickson / Las Vegas Review-Journal
November 18, 2021 - 9:17 am
Don't miss the big stories. Like us on Facebook.
More stories for you