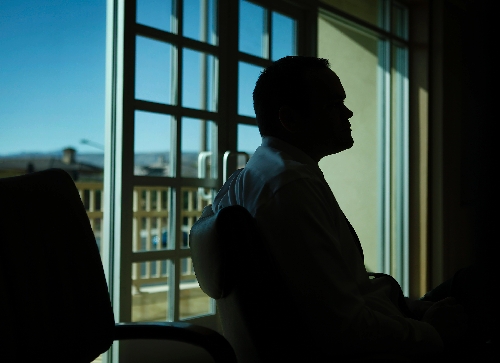 Adam Greene doesn’t hate the Henderson police officers who broke his ribs and bruised his body after they mistook his common medical issue for drunken driving.

His reluctance to stay angry is because of his young son, who — like Greene — has been diagnosed with type 1 diabetes.

Greene doesn’t want his son to grow up thinking it’s common for police to arrest or assault someone for having low blood sugar.

"I just don’t want my kids to think that’s normal behavior to expect from officers," the soft-spoken man said during an interview at his lawyer’s office Wednesday morning.

Greene, dressed in a shirt and tie, appeared uncomfortable with the publicity his case received.

He asked that his face not be photographed and his city of residence and employer not be identified.

In contrast with Mitchell Crooks, who filmed his own beating at the hands of Las Vegas police last year, Greene never sought the spotlight.

He was thrust into a situation that veered out of his control and was reluctant to dwell on it.

"My family just wants to move on and put it behind us," the reserved man said several times.

The interview came on the heels of the release Tuesday of a police dashboard camera video that captured the beating. That same night, the Henderson City Council approved a $158,500 settlement with Greene. And his wife received $99,000 from Henderson.

Nevada Highway Patrol troopers also participated in the Oct. 29, 2010, traffic stop at Lake Mead Parkway and Boulder Highway in Henderson, but the troopers did not appear to assault Greene.

Greene, 38, was driving to work about 4 a.m. when his blood sugar suddenly dropped, and he became disoriented.

Although he normally checked his blood sugar before leaving for work, he had to leave home early that day and figured he would take the reading when he arrived, he said.

His first memory of that night was standing outside a police car in handcuffs, he said.

A Highway Patrol camera filled in the blanks.

Bandiero orders trooper John-Sydney Cass to cuff Greene’s wrists and pull him from the vehicle.

As Greene flops to the pavement, he is swarmed by Bandiero, Cass and three Henderson officers, identified Wednesday as Douglas Lynaugh, Francis Shipp and Seth Vanbeveren.

As the officers restrain an unresponsive Greene, Henderson Sgt. Brett Seekatz enters the frame and kicks Greene five times in the head.

Henderson police said Seekatz was disciplined for his actions but would not disclose his punishment. Seekatz remains at the rank of sergeant.

A Highway Patrol spokesman declined to discuss any possible discipline against the troopers, citing personnel privacy.

A second Henderson officer, whose identity is not clear, delivers four knees to Greene’s midsection.

Moments after Greene was secured, the officers noticed insulin in his pocket and quickly deduced he was a diabetic.

Greene said he didn’t watch the video until a few months ago, although his lawyers had obtained it much earlier.

"It was kind of a shock," he said. "It was surreal, like having an out-of-body experience."

Greene said it was several months before his body felt normal and several weeks before he returned to work as a manager at a retail store.

What most bothered Greene, a former University of Alaska, Anchorage basketball player who stands 6 feet 8 inches, was being physically unfit to help with his four children, who range in age from 1 to 10.

That left his wife of 12 years, Brittany, to carry much of the load at home.

Despite his compassion for the job police officers do — his own father was a highway patrolman — he wants the department to be accountable for what the officers did to him.

Although he said Henderson police never reached out to him, he says officers at the scene apologized after paramedics arrived and before they released him without a citation.

He also is glad that Henderson police have modified their use-of-force policy, which Greene hopes will prevent similar incidents from happening.

"Obviously I think officers reacted inappropriately," he said. "But I fully support them and commend the changes they made."

Henderson Police Chief Jutta Chambers declined a request for an interview through a spokesman. Henderson city spokesman Bud Cranor referred calls for comment back to the statement issued Tuesday by police.

Allen Lichtenstein, general counsel for the American Civil Liberties Union of Nevada, said the case highlighted "significant policing issues," such as not checking the person’s condition before assuming he or she is drunk and the importance of video cameras.

He was reluctant to pass judgment on the discipline the sergeant received without knowing more about the case.

"Certainly what was shown was exceedingly disturbing, and as the discipline seemed rather mild considering the circumstances, it would certainly be worthwhile for the public to know what extenuating circumstances were used to justify such lenient discipline," he said.

Police haven’t said what the specific use-of-force policy changes were but noted in a statement that use-of-force incidents had decreased 30 percent between 2010 and 2011.

Most of all, Greene said, he’s thankful for the Highway Patrol camera that captured the incident.

"It keeps everyone honest," he said.