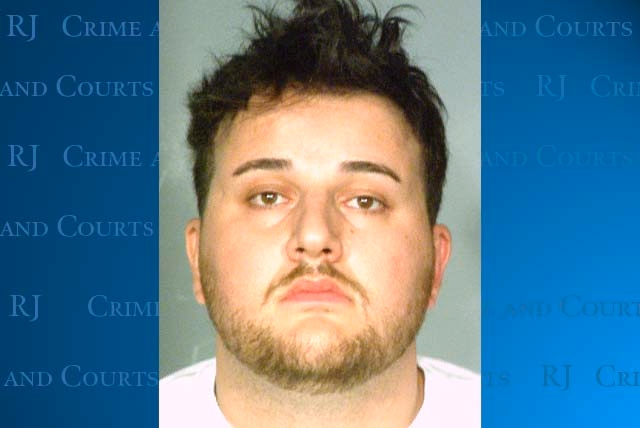 Arman Izadi was indicted on more than a dozen charges of pandering, kidnapping, battery and coercion. He is accused of savagely beating and torturing prostitutes.

Arman Izadi lured women to his prostitution ring with promises of immense wealth, his companionship, and most of all, his protection, Las Vegas police say.

But the suspected pimp, who police say earned hundreds of thousands of dollars from sex workers trolling high-priced Las Vegas nightclubs, did little to guard the women who made him rich.

Police said Izadi, 28, used charm to attract women to his business and intimidation to keep them, viciously beating them if they tried to leave.

Izadi was arrested Wednesday morning when police and IRS agents raided his home at the Sky Las Vegas complex, where he lived in a swanky condo overlooking the Strip. Details of his activities were outlined in a Las Vegas police report released Thursday.

The case against Izadi began in December, when one of his former prostitutes, authorities said, told police she had been tortured after she tried to leave him and the sex industry.

The woman said she met Izadi at XS Nightclub at Encore last year. Izadi claimed to be a special promotions casino host, but his real money came from pimping, police said.

After befriending the woman over the span of a few months, Izadi suggested she could pay her law school tuition by turning tricks.

The woman agreed, and even when Izadi didn’t set up her appointments she found her own clients in the city’s vast nightclub scene. She told police she made more than $20,000 around the busy Halloween weekend last year, not long after becoming a prostitute.

But her income soon slowed, and in a few months she grew tired of the lifestyle. It didn’t help that Izadi was becoming aggressive and constantly demeaned her, she said.

When the woman tried to break away, Izadi became enraged and drove her to a bank where he forced her to withdraw a $5,000 “tax,” she told police.

And in the leased million-dollar Las Vegas Country Club penthouse where she lived with Izadi and several other women, she said he tortured her for more than an hour.

She told police Izadi bound her hands and trapped her in a walk-in shower, where he alternately beat, choked and scalded her with hot water.

Izadi also placed a towel on her face and sprayed water on her, a form of torture called waterboarding. When she started to black out, he would slap her awake, she said.

Izadi later dragged the woman to the penthouse balcony and forced her onto the ledge at knife-point, she said. He threatened to throw her to her death before dragging her back inside the home and spanking her with a wooden paddle, she said.

He then dragged the knife across her body, causing a 5-inch cut on her thigh, she said. The cut and bruises were still visible days later, when she met with detectives.

The torture ended after the woman offered to get a tattoo in Izadi’s honor. She said the pimp drove her to a parlor, where Izadi’s name in Farsi was inked on her neck.

She fled later that night after Izadi left the penthouse for food. Wednesday’s raid on Izadi’s home came more than four months later.

The raid involved at least two condos at Sky Las Vegas. Two women found at the condo complex confirmed Izadi’s violent history, police said. One woman said she earned about $50,000 for Izadi; the other said she made about $100,000. It’s unclear whether they were charged with any crimes.

He wasn’t the first high-level pimp suspect to make headlines in Las Vegas this year.

In February, 27-year-old Ammar Harris shot and killed Kenneth “Kenny Clutch” Cherry Jr. as the two were driving separate vehicles on the Strip early in the morning of Feb. 21. Cherry then crashed his Maserati into a taxi, killing the driver and his passenger.

Both Cherry and Harris were pimps. Police say their dispute stemmed from an altercation at Aria’s Haze nightclub a few hours earlier.

The charges pending against Izadi are his first related to prostitution, but he has a criminal record in Las Vegas.

In October, Izadi pleaded guilty to attempted battery with substantial bodily harm after he beat a man he engaged to shoot a music video, court records show.

He was placed on probation and ordered to pay $30,000 in restitution to his victim within 90 days of the guilty plea.

In addition to living in luxury homes, Izadi drove a Cadillac Escalade and a black Bentley. The Bentley’s personalized license plate: “SHHHH.”