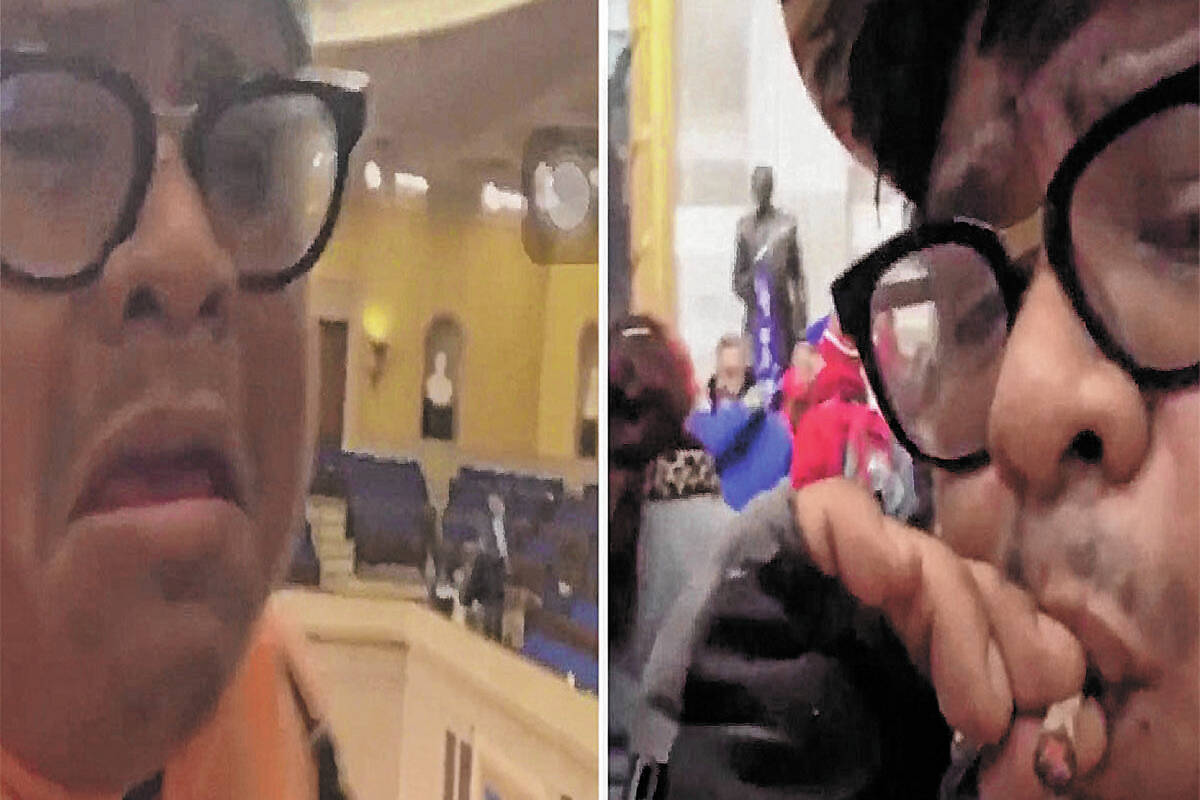 WASHINGTON — A man who videotaped himself smoking pot inside the U.S. Capitol during the Jan. 6 riot and later was arrested in Las Vegas on charges of assaulting police and obstruction of the presidential electoral vote certification is expected to reach a plea deal to avoid trial, court documents show.

Ronald Sandlin, 34, an entrepreneur from Memphis, Tennessee, has agreed to plead guilty to unspecified counts of an indictment resulting from violent behavior by followers of former President Donald Trump during a siege of the Capitol that resulted in the death of five people.

A status hearing Thursday was moved to Aug. 15 by U.S. District Judge Dabney Friedrich on a motion filed by Assistant U.S. Attorney Jessica Arco. The prosecutor is seeking more time “to finalize the plea agreement,” according to a motion she filed.

Sandlin was one of several defendants who legally challenged a felony count of obstruction of a proceeding, which carries a possible 20-year sentence. Friedrich was among several judges who rejected motions to dismiss the charge.

In addition to the felony count of obstructing the electoral vote proceeding, Sandlin also faces felony charges of assault on officers, resisting, witness tampering and other lesser charges.

Sandlin drove to Washington with Las Vegas businessman Nathaniel DeGrave, 32, and Josiah Colt, 35 of Idaho, to participate in the Jan. 6, 2021, siege of the Capitol that they called the “boogaloo,” extremist slang for a second civil war, according to court records.

DeGrave pleaded guilty last month to charges of conspiracy to obstruct an official proceeding and assaulting, resisting or impeding officers.

As part of the plea, he agreed to cooperate with the Justice Department investigation into the Capitol breach, according to the U.S. attorney for the District of Columbia.

DeGrave faces a statutory 20-year sentence on the conspiracy to obstruct an official proceeding charge and eight years for assault. He is awaiting sentencing.

Colt also pleaded guilty this year to charges and agreed to cooperate in the Justice Department investigation. He also awaits sentencing.

Surveillance camera footage and videos posted on social media accounts showed the men inside the Capitol, with Sandlin and DeGrave assaulting police outside the Senate Gallery.

Colt was captured in photos inside the Senate rappelling from the upper gallery after lawmakers were evacuated.

DeGrave shouted to rioters on the Senate floor to “take laptops … take everything.” Sandlin, meanwhile, shot video of himself smoking a marijuana “joint” inside the Capitol amid the chaos. He later posted the video on social media, according to court records.

Sandlin, wearing a blaze orange jacket, was easily identifiable on surveillance camera footage of the riotous crowds inside the Capitol and outside the Senate Gallery on the third floor.

The men stayed in a Maryland hotel where they contemplated whether they should bring weapons to the Capitol. And an undated photo posted to social media by Sandlin showed him brandishing a semi-automatic rifle. None were charged with weapons violations.

DeGrave, Sandlin and Colt wore tactical gear and carried bear spray on the day of the assault, according to the U.S. attorney for the District of Columbia. The men pushed through barricades and entered the Capitol from the West Terrace.

Following the siege, DeGrave and Sandlin posted pictures of Jan. 6 events on Facebook. They then deleted images when the investigation began.

The riots left five dead and many injured when mobs overran police barricades and broke through windows to enter the Capitol and hunt down lawmakers who were certifying election results from the states.

Capitol Police Officer Brian Sicknick was sprayed with a chemical irritant and collapsed during his battle to keep the rioters out. He died the next day.

The D.C. medical examiner’s office confirmed four other deaths as a result of the Capitol siege, including Ashli Babbitt, an Air Force veteran who stormed the Capitol with rioters and was shot by police outside the House chamber. Two other people died of natural causes and one from accidental amphetamine intoxication.

More than 840 individuals have been arrested in nearly all 50 states for crimes related to the breach of the Capitol, including more than 250 individuals charged with assaulting or impeding law enforcement.