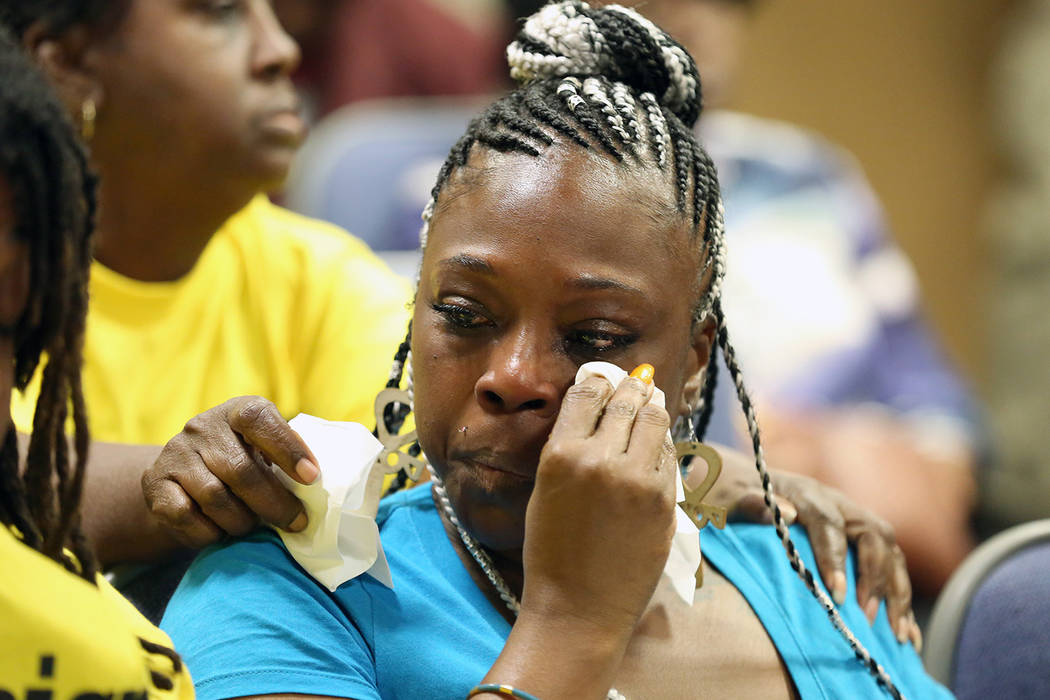 Akiko Cooks weeps on Friday, April 26, 2019 at the Clark County Juvenile Justice Court during a sentencing hearing for teen who made racist posts on Instagram in Las Vegas. Cooks is the parent of one of the victims of two Arbor View High School suspects, 15, 16, accused of a hate crime and making terrorist threats against black students. (Bizuayehu Tesfaye Las Vegas Review-Journal) @bizutesfaye 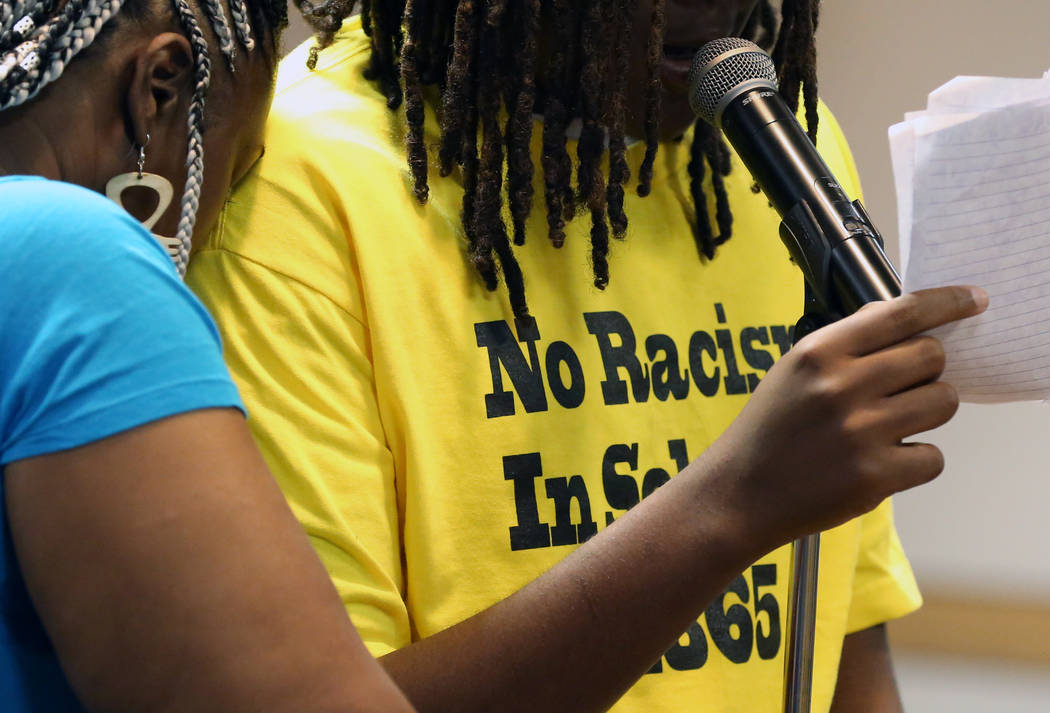 Akiko Cooks, left, reacts as her son reads his victim impact statement on Friday, April 26, 2019, at Clark County Juvenile Court during a sentencing hearing for a teen who made racist posts on Instagram in Las Vegas. (Bizuayehu Tesfaye Las Vegas Review-Journal) @bizutesfaye 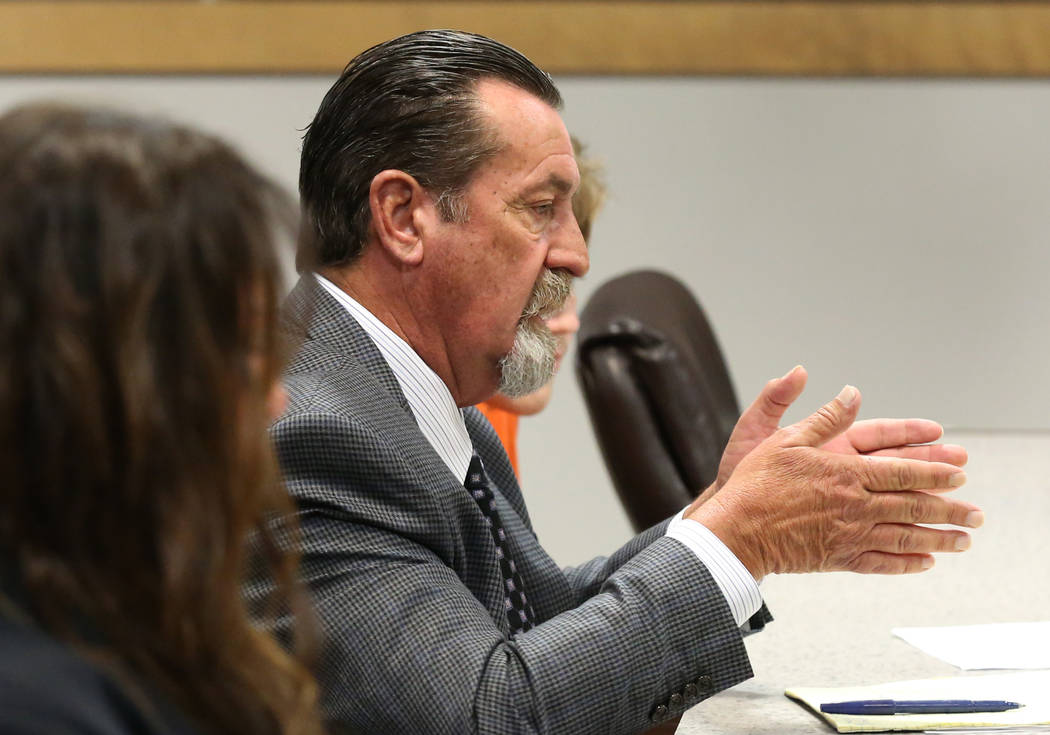 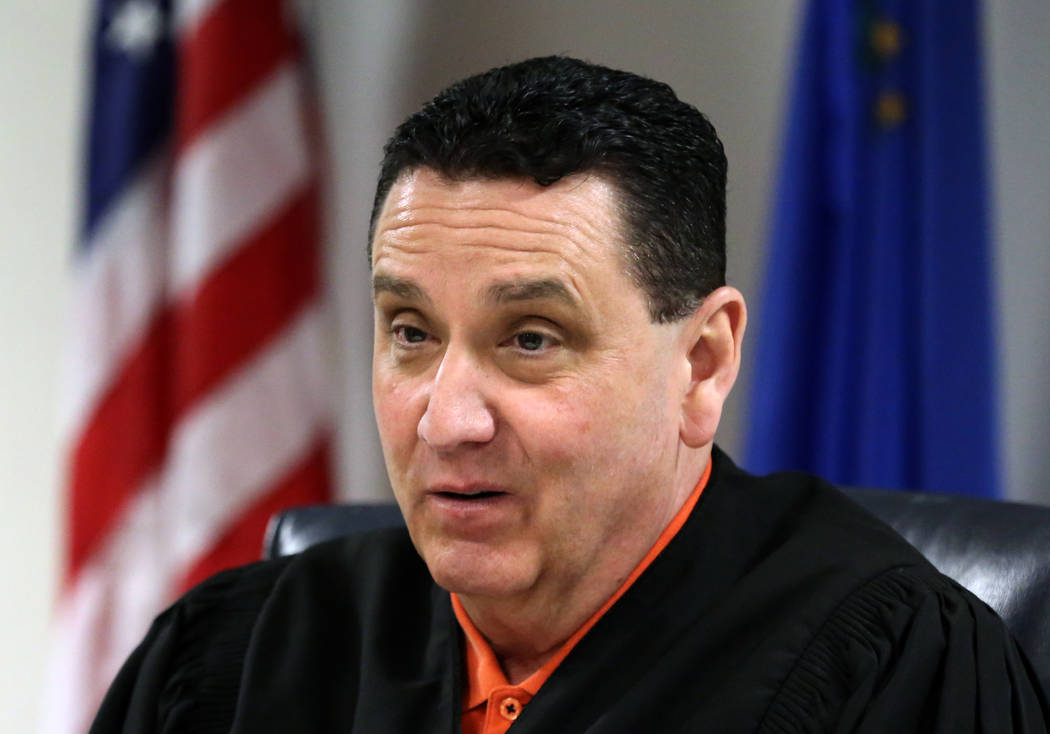 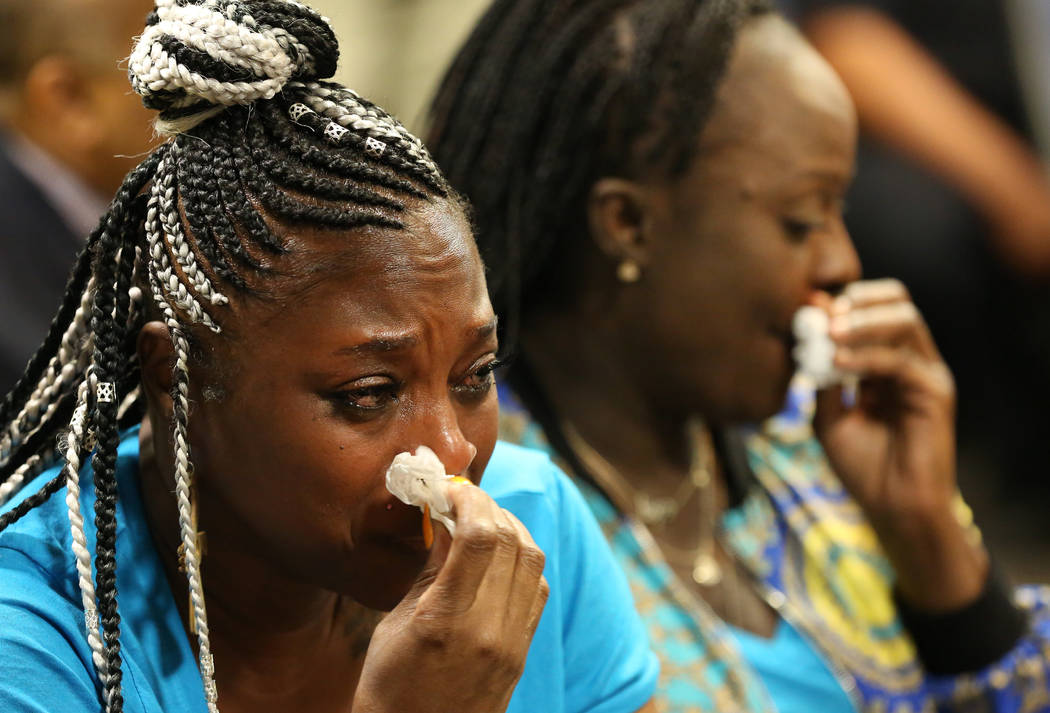 Akiko Cooks, left, weeps on Friday, April 26, 2019, during a sentencing hearing for a teen who made racist posts on Instagram in Las Vegas. Cooks is the parent of one of the victims. (Bizuayehu Tesfaye Las Vegas Review-Journal) @bizutesfaye 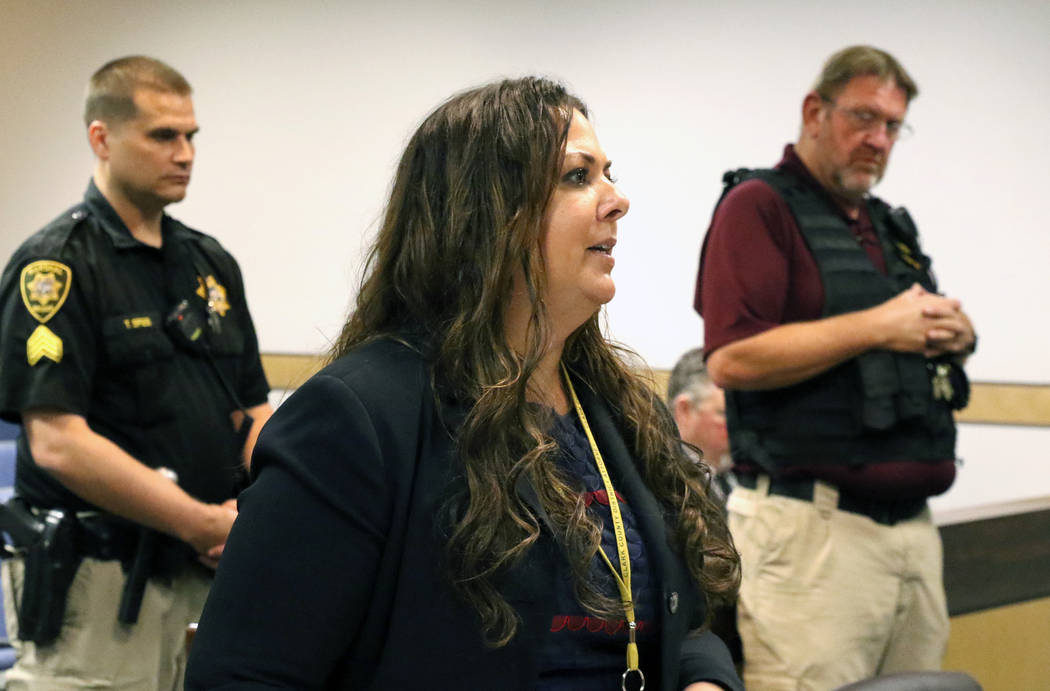 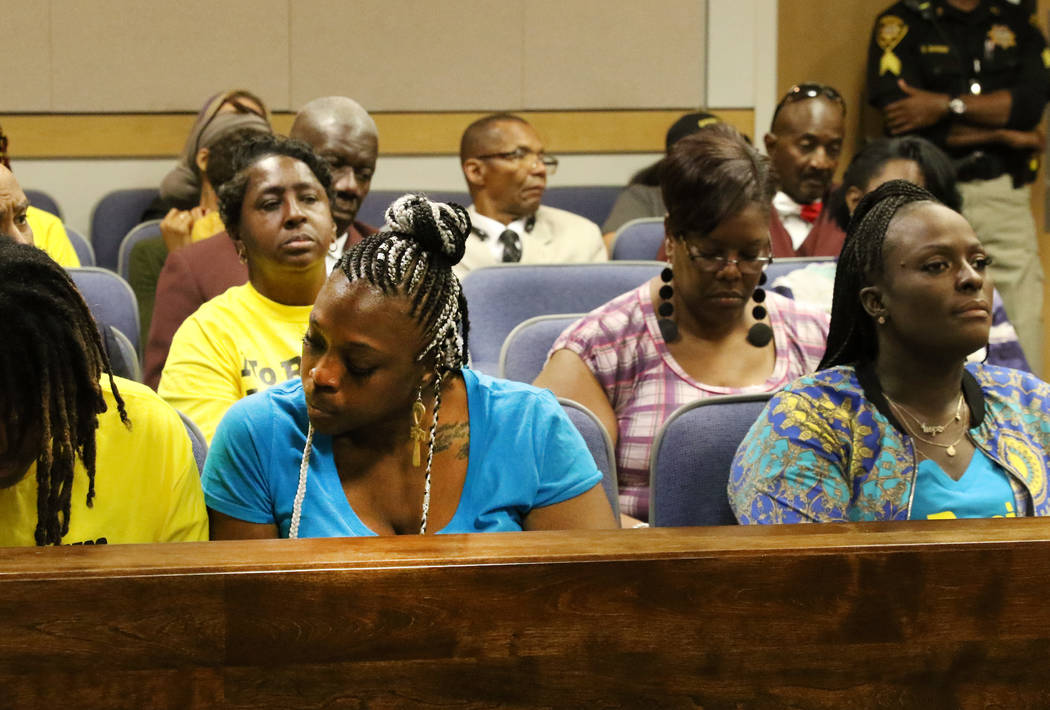 Akiko Cooks, second left, and her son, left, appear on Friday, April 26, 2019, during a sentencing hearing for a teen who made racist posts on Instagram in Las Vegas. Cooks is the parent of one of the victims. (Bizuayehu Tesfaye Las Vegas Review-Journal) @bizutesfaye

The second of two teens was sentenced Friday for his role in a series of racist threats made against black Arbor View High School students on Instagram.

“I’m so sorry for the fear and the trouble this has caused all of you,” the teen said during a Juvenile Court hearing. “This is all because of my poor decision making, my bad judgment. And though my part in this was not the biggest, compared with my co-defendant, any part in something like this is too big of a part. And it sucks that it took me getting arrested to realize that.”

The 15-year-old boy, who pleaded guilty earlier this week to a felony charge of making a terrorist threat, was ordered to a diversion program at a juvenile facility, followed by 12 months of probation.

During his sentence, the teen is prohibited from using the internet and social media, except for supervised academic purposes.

The teen admitted to helping his 14-year-old co-defendant, the Instagram account creator, write photo captions that threatened to “cleanse” the school’s hallways of black students in a “Columbine pt. 2.” The threats were posted with candid photos of nine black students, and the account’s username included a racist slur.

During the hearing before Judge William Voy on Friday, one of the targets of the Instagram posts wore a yellow T-shirt with the words “No Racism In Schools #1865.”

He said he had not known the boys who created the account. He said he was at first confused about his picture having been taken. Then, he said, “It dawned on me that someone wanted to shoot and kill us because we were black.”

About 15 people sat in the courtroom gallery in support of the victims, some wearing similar T-shirts, many wiping away tears as he spoke.

“I’ve heard of horrible things like this happening to other people, but I never thought it would happen to me,” he said, with his mother at his side. “How do you hate someone because they look different than you? How do you hate someone you don’t know that has never done anything wrong or bad to you? … I like being a teenager, and somehow I’m pushed into adult things. I’m glad it was just a phone that was aimed at my head and not a weapon.”

The teen who was charged also dabbed his eyes with a tissue as he sat in an orange sweatshirt and blue sweatpants next to his lawyer. He has remained in custody at the Juvenile Detention Center since his March 19 arrest. The amount of time he spends in the diversion program will depend on the customized program created for him by Clark County Juvenile Probation.

Voy also said the teen would not be allowed to re-enroll in the Clark County School District without the court’s permission, and he instructed the teen to write apology letters to all nine students whose photos were posted to the account and to the school at large.

MOST READ
1
1 killed, several injured after stabbing in front of Strip casino