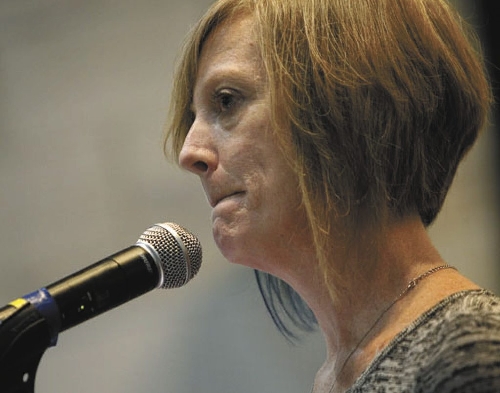 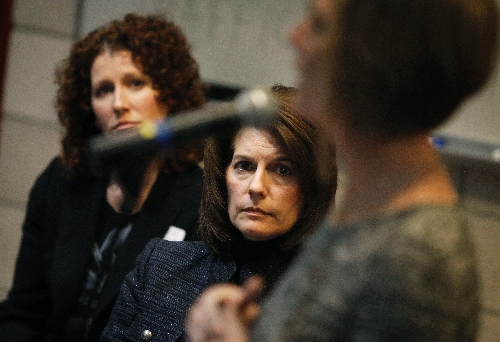 The signs that her youngest daughter was a prostitute couldn’t have been more obvious, although she didn’t make the connection at the time.

There was the seductive way she dressed, the casual talk of sex during dinner, the way she called her boyfriend “Daddy” and he called her “Wifey.”

Then one day a big tattoo showed up on the back of her shoulders and neck.

But the kicker – the thing that the mother kicks herself over – was the blisters and deep callouses on her daughter’s feet: the result of having walked the Strip in high heels for days on end.

When Andrea Swanson finally confronted her in her bedroom two years ago – she told an audience of more than 200 people at a sex trafficking summit at UNLV on Wednesday – she first acted like “a caged animal.”

Then she copped to it.

“What the f—!” the daughter screamed. “OK. I’m a ‘trick roll’ girl, I find the drunkest mother … on the Strip, I go back to his hotel room, I tell him to clean his ass up, then I steal his money and run.”

Swanson’s riveting story of her daughter, a Centennial High School graduate, was the beginning of the six-hour summit that was convened by Nevada Attorney General Catherine Cortez Masto in hopes of starting a dialogue to put an end to what is considered not just a local problem, but a global one.

More than 200 people, from police to nonprofit organizations to churches to Nevada legislators, turned out to watch heart-wrenching videos of girls who have been victimized in far away places such as Wichita, Kan., and to hear the tenets of a sex trafficking bill that Cortez Masto plans to introduce in the Legislature next month.

Assembly Bill 67 would toughen penalties for pimps, who, upon conviction, could serve a maximum of 20 years in prison for their deeds. The maximum now is four years.

The bill would let the women sue their pimps while changing the name of the crime itself: Pimping now is referred to as “pandering,” something many people don’t even understand, Chief Deputy Attorney General Michon Martin said.

Instead, the crime would be called “sex trafficking,” which occurs when there is some sort of fraud, force or coercion, something that is happening all too often in Las Vegas, according to Metropolitan Police Department vice detectives.

The bill would abolish the right of the pimps to waive preliminary hearings and immediately set trial dates. It’s a judicial loophole that is often used to delay justice by a year or two, by which time the victims either change their minds or are nowhere to be found when their time to testify rolls around.

As for those pimps who sell children on the streets, they would face life in prison with the possibility of parole not until 10 years. And in such cases, prosecutors wouldn’t have to prove that there was any force or coercion because the victims are children and, by law, cannot have consensual sex.

Picking up children on the streets of Las Vegas is happening much too often, summit participants agreed.

About 103 children, most of them between the ages of 15 and 17, were either arrested or recovered by the Police Department’s Vice Squad in 2012.

But Sgt. Ron Hoier, in charge of the department’s pandering investigation team, said that for all the children who police manage to save there are always the ones who fly below the radar, and he could always use a few extra detectives.

In 2012 alone, he said, roughly
$2.2 million was stolen from men who actually called Las Vegas police to report the burglaries from their hotel rooms, though they might have run the risk of facing solicitation charges themselves.

He figures that number represents
10 percent of the total money lost by the “trick rolls.”

As far as solving the problem with tougher penalties, there were a few naysayers among the summit’s panelists who warned of its inherent problems – namely, tougher penalties don’t always deter criminals, and there might not be enough room for the pimps in Nevada’s prisons.

They said one commonly overlooked solution is to invest in treatment.

Build a safe haven in Las Vegas, they said. Build a place where the girls – or women – can live.

It’s something that is long overdue and something that irks District Judge William Voy to no end. The judge has been pushing for some sort of safe haven as far back as 2006, when his docket was full of girls appearing before him shackled at the hands and feet, as though they were the criminals instead of the victims.

“Frankly, I’m tired,” Voy said during a short speech. “Show me the money. That’s what we need here.”

Meantime, it’s up to people like Terra Koslowski to find the missing girls who are being pimped out on the streets.

She is in charge of program development for the Las Vegas-based FREE, a nonprofit group that tries to “find, rescue, embrace, and empower female victims of human trafficking.” Her next destination is the Super Bowl in New Orleans, where she will try to get hotels to put the number of the National Human Trafficking Resource Center hotline – 1-888-373-7888 – on their bars of soap. That is what she did when the Super Bowl was in Indianapolis.

“The Super Bowl is a huge game,” Koslowski said. “And we know that pimps show up from all over the country for what essentially is one big party. And we’re going to be there.”

As for Swanson’s daughter, she is back with her boyfriend. He did 2½ years in prison and was released a few weeks ago. She is living with him in a weekly motel, her mother said.

But instead of lecturing her daughter, Swanson, 49, said she’s going to listen to her concerns and try to re-establish what has long been a frayed relationship.

She said she has learned that trying to physically prevent her daughter from doing something just doesn’t work.

“I want to get the spirit of my daughter back,” she said. “It’s going to take time, but I’m going to do it.”