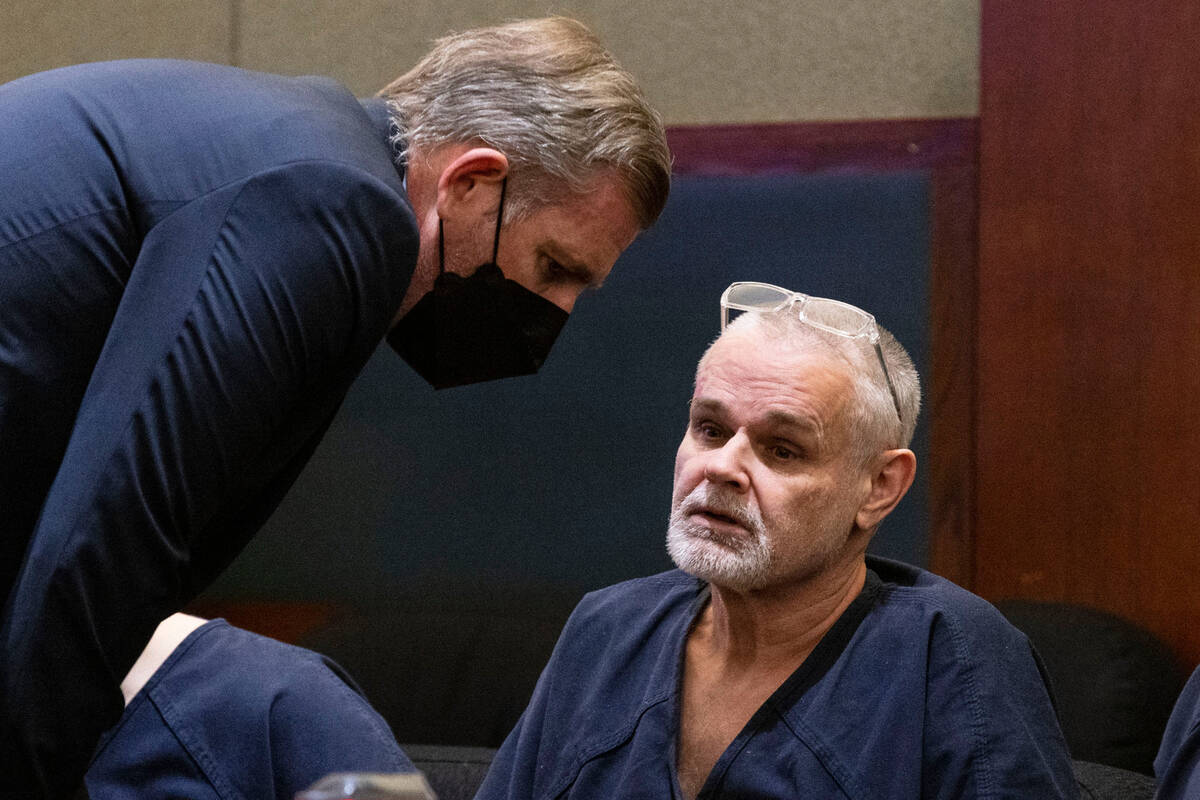 Eric Holland, right, talks to attorney David Westbrook during his sentencing at the Regional Justice Center on Thursday, Dec. 1, 2022, in Las Vegas. Holland, who was arrested last year with a dismembered body in the stolen vehicle he was driving, was sentenced to 18 to 45 years in prison. (Bizuayehu Tesfaye Las Vegas Review-Journal) @btesfaye 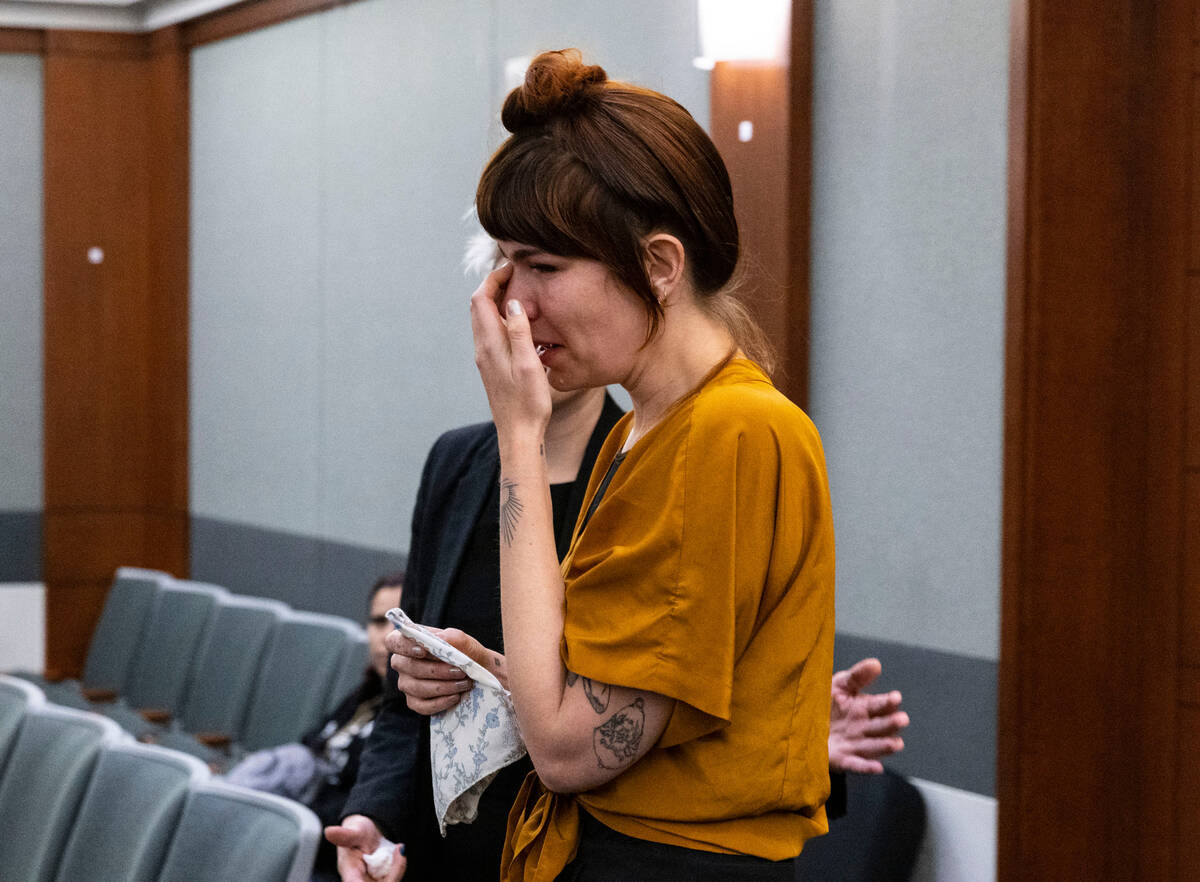 Amanda Dawn Potter, daughter of the murder victim Richard Miller, gets emotional as she takes the lectern to deliver her victim impact statement during Eric Holland's sentencing at the Regional Justice Center on Thursday, Dec. 1, 2022, in Las Vegas. Holland, who was arrested last year with a dismembered body of Miller in the stolen vehicle he was driving, was sentenced to 18 to 45 years in prison. (Bizuayehu Tesfaye Las Vegas Review-Journal) @btesfaye 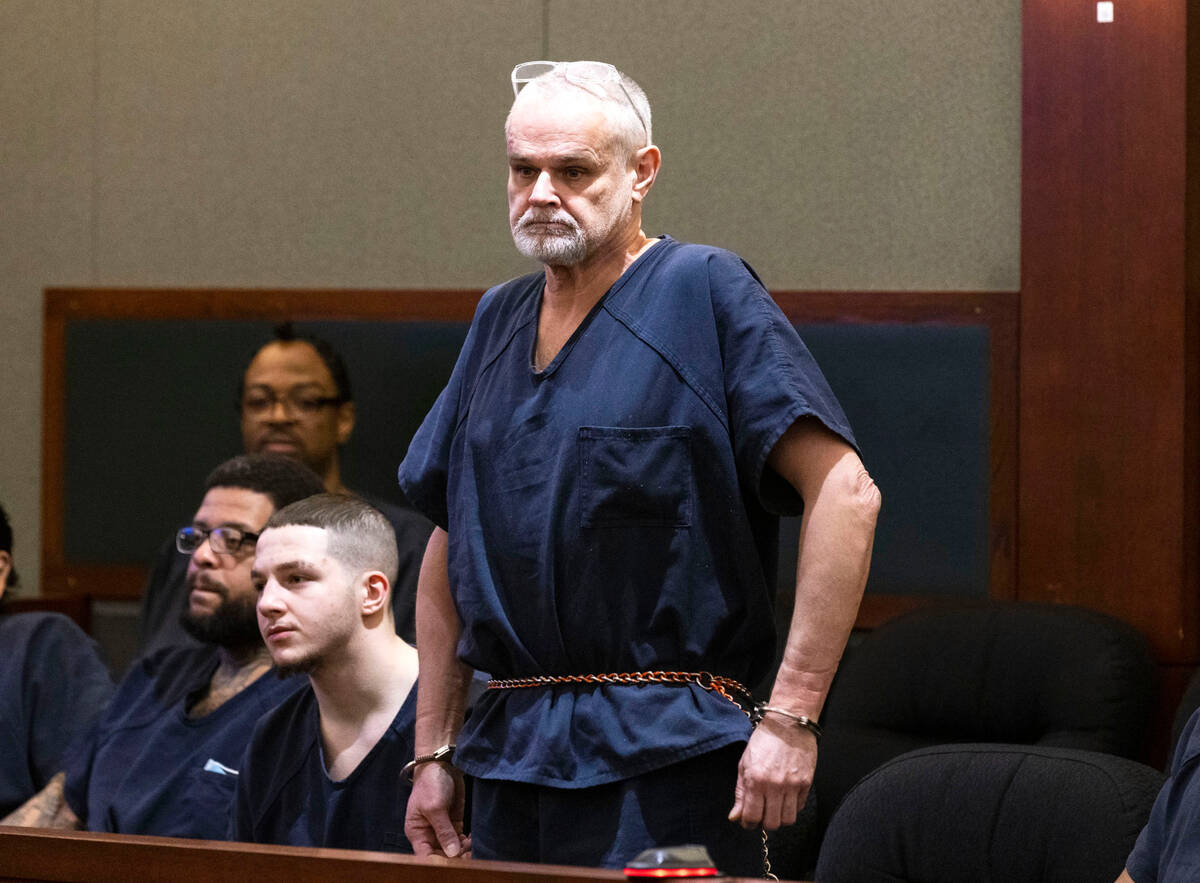 Eric Holland appears in court during his sentencing at the Regional Justice Center on Thursday, Dec. 1, 2022, in Las Vegas. Holland, who was arrested last year with a dismembered body in the stolen vehicle he was driving, was sentenced to 18 to 45 years in prison. (Bizuayehu Tesfaye Las Vegas Review-Journal) @btesfaye 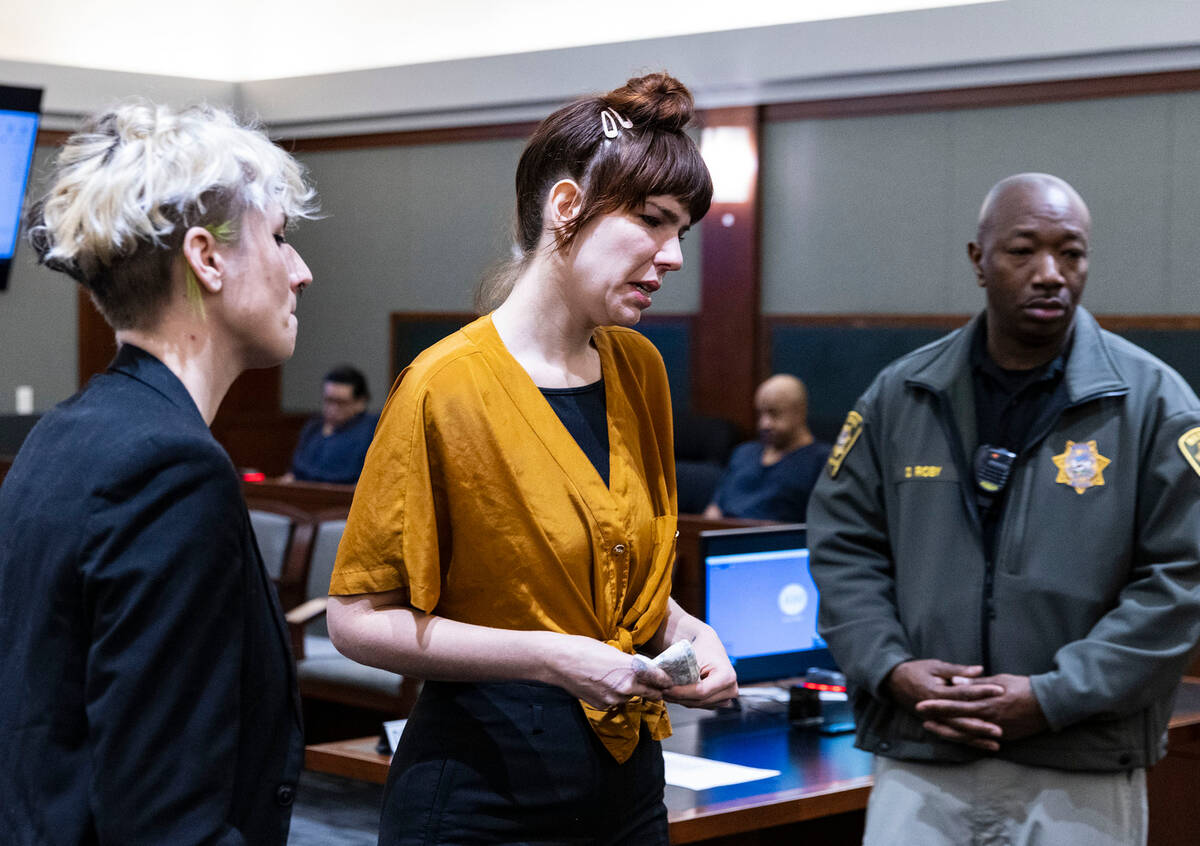 Amanda Dawn Potter, center, daughter of the murder victim Richard Miller, returns to her seat after delivering her victim impact statement during Eric Holland's sentencing at the Regional Justice Center on Thursday, Dec. 1, 2022, in Las Vegas. Holland, who was arrested last year with a dismembered body of Miller in the stolen vehicle he was driving, was sentenced to 18 to 45 years in prison. (Bizuayehu Tesfaye Las Vegas Review-Journal) @btesfaye 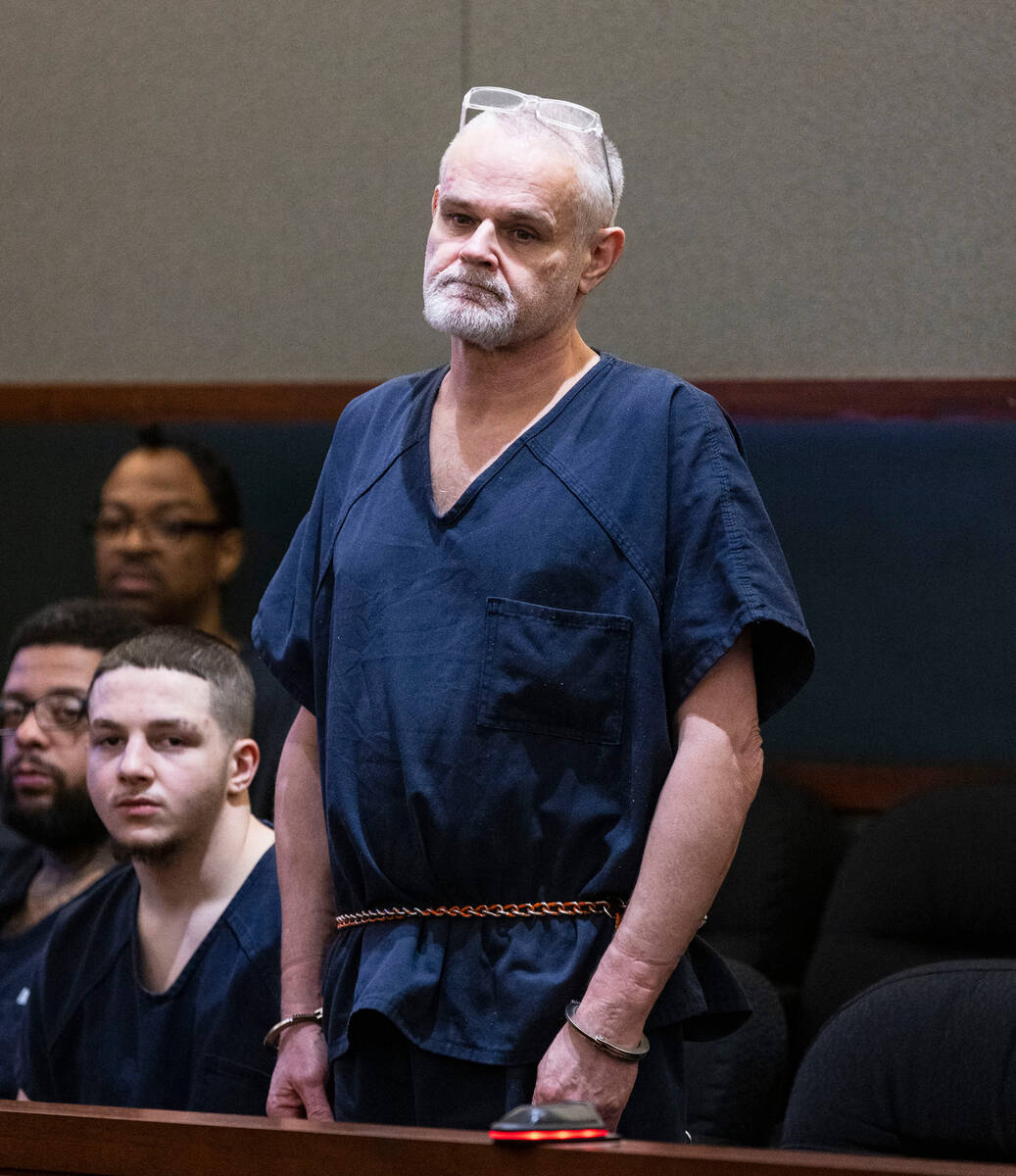 Eric Holland appears in court during his sentencing at the Regional Justice Center on Thursday, Dec. 1, 2022, in Las Vegas. Holland, who was arrested last year with a dismembered body in the stolen vehicle he was driving, was sentenced to 18 to 45 years in prison. (Bizuayehu Tesfaye Las Vegas Review-Journal) @btesfaye

A man arrested last year with a dismembered body in a stolen vehicle told a judge on Thursday that “there was a reason” the killing happened.

Eric Holland, 58, was arrested in December 2021 after leading police from a parking garage at the Rio to a nearby apartment complex in the west Las Vegas Valley.

Inside the stolen vehicle, officers found the dismembered body of Richard Miller, a 65-year-old man who lived on a houseboat at the Lake Mead National Recreation Area and had a history of working with Holland, court records show.

In July, Holland pleaded guilty to second-degree murder with a deadly weapon, admitting to shooting Miller multiple times. On Thursday, District Judge Tierra Jones sentenced Holland to between 18 and 45 years in prison.

It was after the guilty plea that Holland spoke with detectives about what he claimed led to the confrontation with his friend.

During a recent jailhouse interview with the Las Vegas Review-Journal, Holland said that in late 2021, he began to believe that something had happened to Miller’s ex-wife, Jing Mei Zhu.

The couple married in 2018 and divorced less than a year later, when Miller alleged in court documents that Zhu left him and moved to China.

“I can tell you that Eric believes that she is dead and Richard killed her,” Holland’s attorney, David Westbrook, said in a phone interview on Wednesday. “He believes that very strongly.”

During the sentencing hearing on Thursday, Holland told the judge that he was “truly remorseful” for Miller’s death. He said he had planned to tell the judge why the confrontation between the two men had happened, but he changed his mind because Miller’s family was listening.

“It’s a terrible thing that has happened, and I’m just so sorry,” he said.

Miller’s daughter, Amanda Dawn Potter, told the Review-Journal that she was aware of Holland’s accusations and doesn’t believe his story.

“I don’t really trust anything that comes out of that guy’s mouth,” said Potter, who declined to comment further.

Potter gave a short statement to the judge during the sentencing hearing, speaking quietly through her tears. She said the grief from her father’s death had been “insurmountable.”

“This is the most bizarre thing that’s ever happened to my family, and I don’t know how to make sense of it,” she said.

The victim’s brother, 73-year-old Howard Miller, said in a phone interview with the Review-Journal on Thursday that he never met Zhu and didn’t know she was married to his brother until after his death.

He spoke to his brother infrequently on the phone during their adult lives, but Howard Miller said the killing left him feeling “empty.”

“It was a senseless and tragic murder and death,” Howard Miller said. “No one deserved to have their life cut short and to be so horrifically killed.”

‘Only time will tell’

Westbrook said that after Holland pleaded guilty to the murder charge, he asked to speak with Metropolitan Police Department officers and was interviewed for more than an hour on Monday.

Holland, who also went by the alias “Brian Long,” has a history of fraud and was convicted of a felony theft charge in 2000, court records show. But Westbrook said Holland has nothing to gain from his allegations, as he was not offered a lighter sentence or plea deal in exchange for talking with police.

“He might be wrong that Richard killed Jing Mei Zhu. Only time will tell on that,” Westbrook said. “But you can’t question his motivation because he’s not getting anything for this. He has no reason to make this up.”

In response to an inquiry abut Metro’s interview with Holland, the department said Thursday that police do not have an open missing person’s case regarding Zhu.

During jailhouse interviews with the Review-Journal, Holland detailed how he met Richard Miller and worked odd jobs for him in the year leading up to the killing.

Holland said he was helping the man clean out his Henderson home to be sold. Inside the home were Zhu’s personal items and documents, Holland said. He said he also found a bloody shirt on Richard Miller’s boat that the man said belonged to his ex-wife.

Property records show that five months into their marriage, Richard Miller and Zhu bought the home on the 1900 block of Grey Eagle Street, in a Henderson gated neighborhood near Wigwam Parkway and Valle Verde Drive. Richard Miller was awarded the home when the divorce was granted in July 2019 after Zhu could not be located by someone attempting to serve a court summons, court records show.

Both Holland and his attorney said Zhu is believed to have lived in Canada and China before marrying Richard Miller. Attempts to locate contact information for Zhu or her family were not successful.

While Holland went into detail about his prior interactions with Richard Miller, he wouldn’t say much about the circumstances of the shooting itself. He said he only wanted to give an interview because of his suspicions about the man’s ex-wife.

“I’m going to prison for the rest of my life, and I just want to make sure that she wasn’t forgotten,” he said.

The National Park Service began investigating Richard Miller’s disappearance about a month before Holland’s arrest, after Richard Miller failed to meet with someone at his houseboat in November 2021.

Kristin Waring, a federal law enforcement officer with the park service, testified during a grand jury hearing in January that she spoke with a man she believed to be Brian Long about the last time he saw Richard Miller and that it sounded like the two were in an argument.

Holland said the two were driving to California to pick up a boat trailer when he confronted Richard Miller about his suspicions regarding Zhu. He would not say where the confrontation happened, only that it was during the trip to California.

“I don’t know how to explain. I can’t explain,” Holland said. “It was very heated.”

Holland said each of them was carrying a firearm. Westbrook said Holland believed Richard Miller had a gun on him, and a gun apparently belonging to Richard Miller is in police custody.

The victim was shot six times, according to court records, including shots to the back of his head and to his chest. Westbrook said evidence indicated that Holland dismembered the body a week to 10 days after the killing.

The attorney said the dismemberment might have been a way for Holland to move the body, as Richard Miller was much larger than Holland.

Just about 3:40 p.m. on Dec. 23, police tried to stop Holland while he was driving a stolen Toyota Tundra near Tropicana Avenue and Duneville Street. Holland drove away from police and pulled into a parking garage next to the Rio. Police then tracked Holland leaving the parking garage in a different vehicle — a Chevrolet Avalanche that also had been reported stolen and had been parked in the garage two days earlier.

Police followed the Avalanche to the apartment complex, where Holland tried to run from officers but was stunned with a Taser and detained. Inside the truck’s bed were multiple coolers containing body parts.

Holland said he kept Richard Miller’s body because he intended to bury it.

“I was trying to figure out what would be the best place to make sure that he was buried,” he said.

After a court hearing in January, Westbrook questioned why Holland would lead police to the body.

“When I gave my initial statement to the press, I said that if you believe that Eric Holland knew what was in that truck, you would also have to believe that he led police right to it,” Westbrook said Wednesday. “In the trial we were going to answer that question … and the answer is because he did want to lead police to the body.”