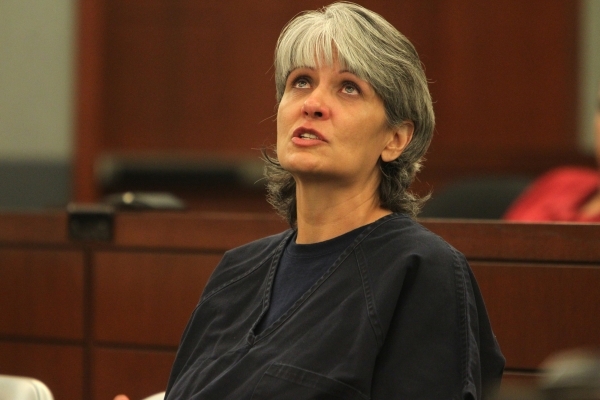 Jerry Meador, convicted of theft charges, speaks during a court hearing for an opportunity to participate in a rarely used diversion for problem gamblers at the Regional Justice Center on Monday. (Erik Verduzco/Las Vegas Review-Journal) Follow Erik Verduzco on Twitter 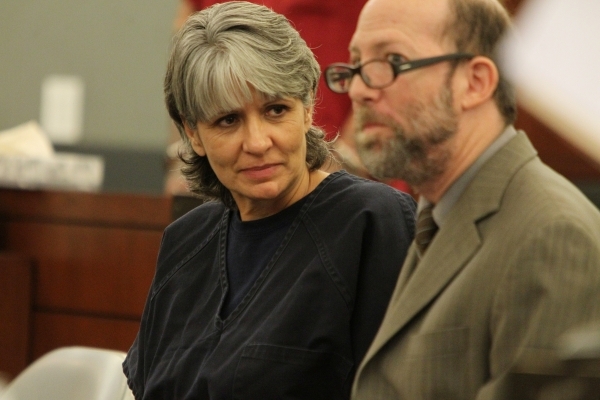 Jerry Meador, left, convicted of theft charges, speaks to her attorney Dayvid Figler during her court hearing for an opportunity to participate in a rarely used diversion for problem gamblers at the Regional Justice Center on Monday. (Erik Verduzco/Las Vegas Review-Journal) Follow Erik Verduzco on Twitter 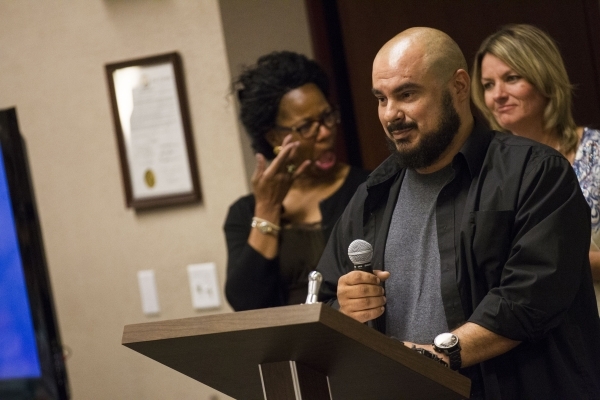 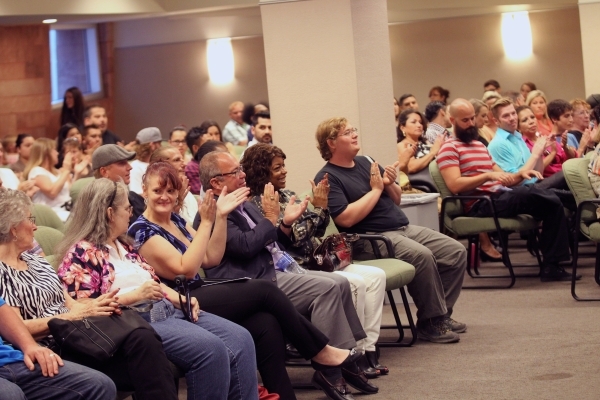 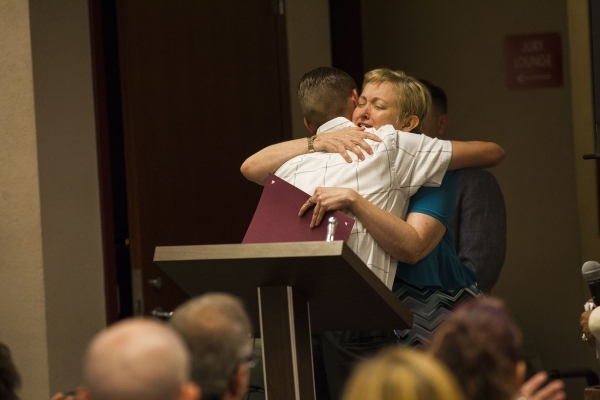 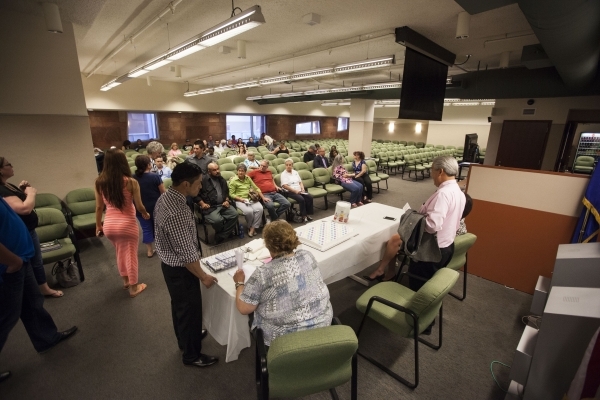 People check in before the start of a graduation ceremony for participants of specialty court programs at the Regional Justice Center in Las Vegas on Friday, July 24, 2015. (Chase Stevens/Las Vegas Review-Journal) Follow Chase Stevens on Twitter 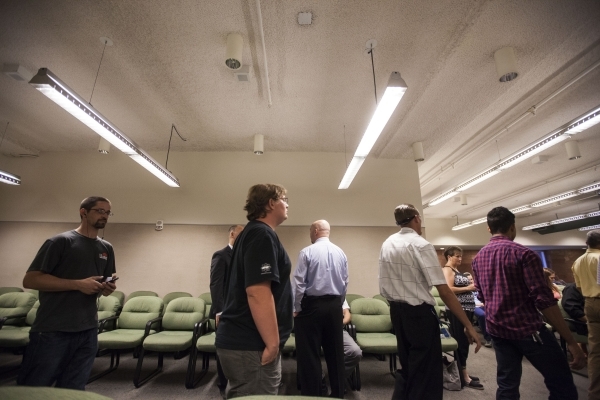 People line up to check in before the start of a graduation ceremony for participants of specialty court programs at the Regional Justice Center in Las Vegas on Friday, July 24, 2015. (Chase Stevens/Las Vegas Review-Journal) Follow Chase Stevens on Twitter 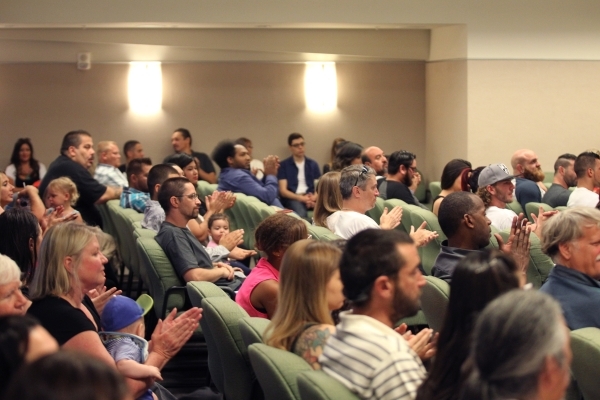 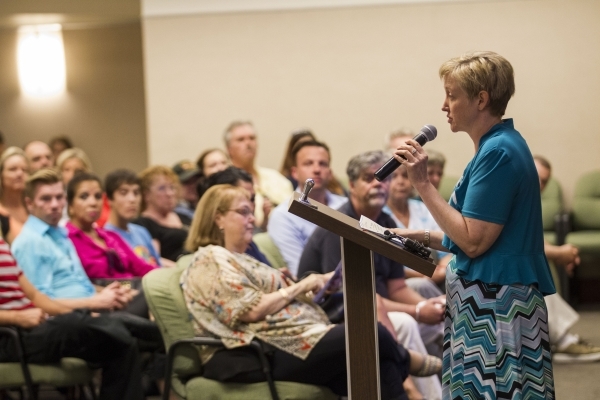 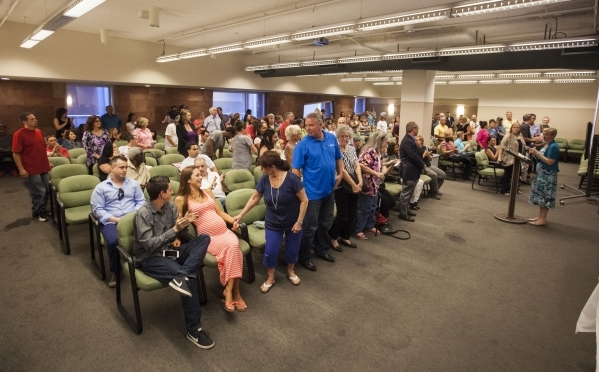 Supporters stand up at the start of a graduation ceremony for participants of specialty court programs at the Regional Justice Center in Las Vegas on Friday, July 24, 2015. (Chase Stevens/Las Vegas Review-Journal) Follow Chase Stevens on Twitter 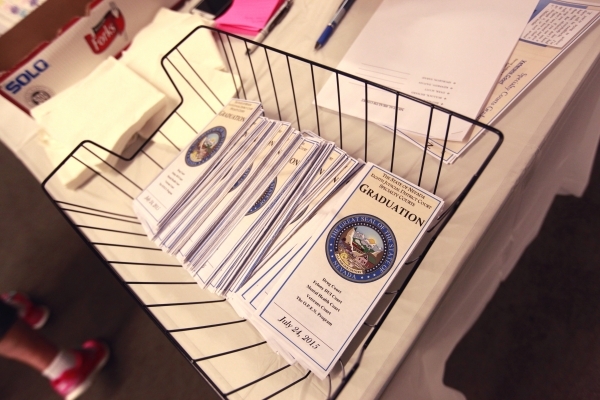 Pamphlets are seen before the start of a graduation ceremony for participants of specialty court programs at the Regional Justice Center in Las Vegas on Friday, July 24, 2015. (Chase Stevens/Las Vegas Review-Journal) Follow Chase Stevens on Twitter

Jerry Nann Meador sits in the Florence McClure Women’s Correctional Center without access to treatment she needs for a gambling addiction that landed her in prison.

In January 2014, her lawyer pleaded with District Judge Jessie Walsh to offer Meador a chance at probation, pointing to a letter she wrote before being locked up.

“Dear Gambling, I have never committed myself to anyone or anything like I did to you,” the letter began. “Nothing has ever controlled me like you did … I do not know if I will ever fully recover from the damages you and I have caused together but I am going to try and be as committed to that as I can.”

The 52-year-old grandmother’s case isn’t unusual in Nevada, where an estimated 6 percent of the population are problem gamblers. What stand out are the amount of money she stole to feed her addiction and the lack of treatment options for her in the state’s criminal justice system.

Prosecutors argued that Meador stole $542,000 from a plumbing business where she worked for nearly 25 years as an office manager and bookkeeper. Meador probably took as much as $900,000, but the theft went back so far that the statute of limitations expired for some of the years. She spent the money on video poker and slot machines but also made credit card, cellphone and satellite television payments, prosecutors said.

Before being caught, Meador ran through $1.5 million or more per year in gambling machines, her lawyers said.

In sending her to prison for four to 10 years, the judge focused on Meador’s betrayal.

“It’s really hard for the court to comprehend how you could come to work every day for a period of four years, look the people in the eyes that you work with, including your boss and colleagues, and steal them blind,” Walsh said at Meador’s sentencing.

Now the same judge wants to know whether Meador should have been offered a chance to avoid prison, instead being allowed access to a program for problem gamblers. Walsh last week ordered briefs from defense lawyers and prosecutors in Meador’s case, and is expected to rule in November if she deserves a hearing to determine if she qualifies for a little-used program designed to divert problem gamblers to treatment.

Trouble is, Clark County, which offers diversion to treatment-oriented special courts for drug addicts, repeat DUI offenders and troubled war veterans, has never established a specialty court for problem gamblers. In the six years since Nevada lawmakers authorized treatment instead of prison for nonviolent problem gamblers, diversion has been allowed in only two cases.

Specialty court programs, implemented in Nevada in 1992, are aimed at people who face a variety of criminal charges that might have stemmed from addiction. Instead of being sent to prison or placed on probation with only an officer to monitor them, a judge orders intensive counseling and retains oversight. It’s considered more cost-effective than incarceration and a proactive way to reduce repeat offenses.

Chief District Judge David Barker said there are about 300 people enrolled in drug court alone, and that number is expected to double by year’s end.

Barker said cases that could qualify for problem gambling diversion would equal about 10 percent of the drug court’s caseload, which makes it possible for individual judges to oversee those cases without a special court structure. No specialty court is needed unless the caseload increases, he said.

But lawmakers made the ability to pay restitution to victims a prerequisite for problem gambler diversion. Because of the nature of the addiction, the defendants are often broke when they reach court — few can meet the repayment qualification.

In Meador’s case, defense lawyer Dayvid Figler has argued that imprisoning problem gamblers is “inappropriate,” and he has asked that she be released for treatment. Prosecutors counter that she should stay locked up because she has no way to repay the money she stole, as required by state law.

In court last week, Figler asked Meador: “Do you have a desire to help yourself with your gambling problems and gambling addiction?”

“Absolutely,” she said through tears.

Figler called treatment for problem gamblers “necessary” in a community where wagers are offered not just on the Strip but in strip malls and at gas stations and grocery stores.

Douglas Crawford, a lawyer who helped write the problem gambling diversion law, later benefited personally from it: Until last month, he was the only person in Clark County known to have been granted a diversion from prison as a problem gambler.

Crawford was appointed to the governor’s committee on problem gambling after the State Bar of Nevada suspended him from practicing law for gambling away more than $300,000 of his clients’ money.

In 2012, a judge allowed Crawford to take part in the three-year diversion program. If Crawford successfully completes treatment and pays back $304,831 he stole, the felony case will be dismissed and his record sealed.

Crawford’s law license was reinstated last month, and he has since paid about $85,000 in restitution. He anticipates repaying the remainder within two years.

Crawford, who also was addicted to alcohol and drugs, said he gambled away $2.5 million of his own money before he dipped into his clients’ funds.

In a series of YouTube videos posted in October, Crawford spoke about his addiction and of sneaking into casinos late at night so no one would recognize him.

“Gambling took more away from me quicker than any of my other addictions,” he said. “The gambling addiction was so powerful and so overwhelming that it took away everything I have in my life. My gambling addiction turned me into a zombie.”

But with treatment, the court ruled, Crawford could make enough money to pay restitution.

Clark County District Attorney Steve Wolfson said many defense lawyers may not even know that gambling diversion exists. He said his office has only received a “handful” of requests for it.

“We’re going to take these cases on a case-by-case basis,” he said. “And we’re going to determine if the person is appropriate for consideration. Restitution is oftentimes a huge part of the equation. We have to be sensitive to the payment of restitution when we review all of this.”

Carol O’Hare, executive director of the Nevada Council on Problem Gambling, helped write the law. Many defense attorneys are not trained to recognize gambling addiction, she said, and problem gamblers may not know the law is in place.

“I don’t think the lack of cases has anything to do with the lack of need,” she said. “There’s been a learning curve for the attorneys and the judges to understand this is available now.”

But they are learning.

Last month, lawyers for 39-year-old Daniel Ortega showed a judge thousands of dollars in gambling receipts from 2010 to 2014 and said that he had enrolled in Gamblers Anonymous.

In a desperate attempt to feed his addiction, Ortega had walked into South Point and tried to use a phony credit card to obtain a $2,000 cash advance. The cashier immediately noticed the fake card, and Ortega was hit with felony charges. The case was a “wake-up call” for Ortega, defense attorney Kristina Wildeveld wrote.

Ortega pleaded guilty to a felony and could have been sent to prison. But at Ortega’s sentencing, District Judge Eric Johnson, a former longtime federal prosecutor recently appointed to the bench, acknowledged that he was walking a tightrope in allowing for the diversion so rarely granted.

And because Ortega’s fraud never resulted in a financial loss to his victim, restitution wasn’t an issue.

“I’m prepared to take the leap if this is what Mr. Ortega wants to do,” Johnson said. “Mr. Ortega, essentially, you’re going to be done gambling. You understand that? This is going to be up to you, if you don’t complete this successfully, we go back to sentencing, and I’m not going to be particularly sympathetic at that point.”

“All right,” the judge said, “Mr. Ortega this is all in your hands. Good luck.”