Relatives of 2-year-old Amari Nicholson, who was killed earlier this month, released balloons in his honor and held a press conference to thank volunteers for their efforts. They also stressed that they demand justice against Nicholson's accused killer, Terrell Rhodes, who is being held without bail for the child's murder. (Rachel Aston/Las Vegas Review-Journal) 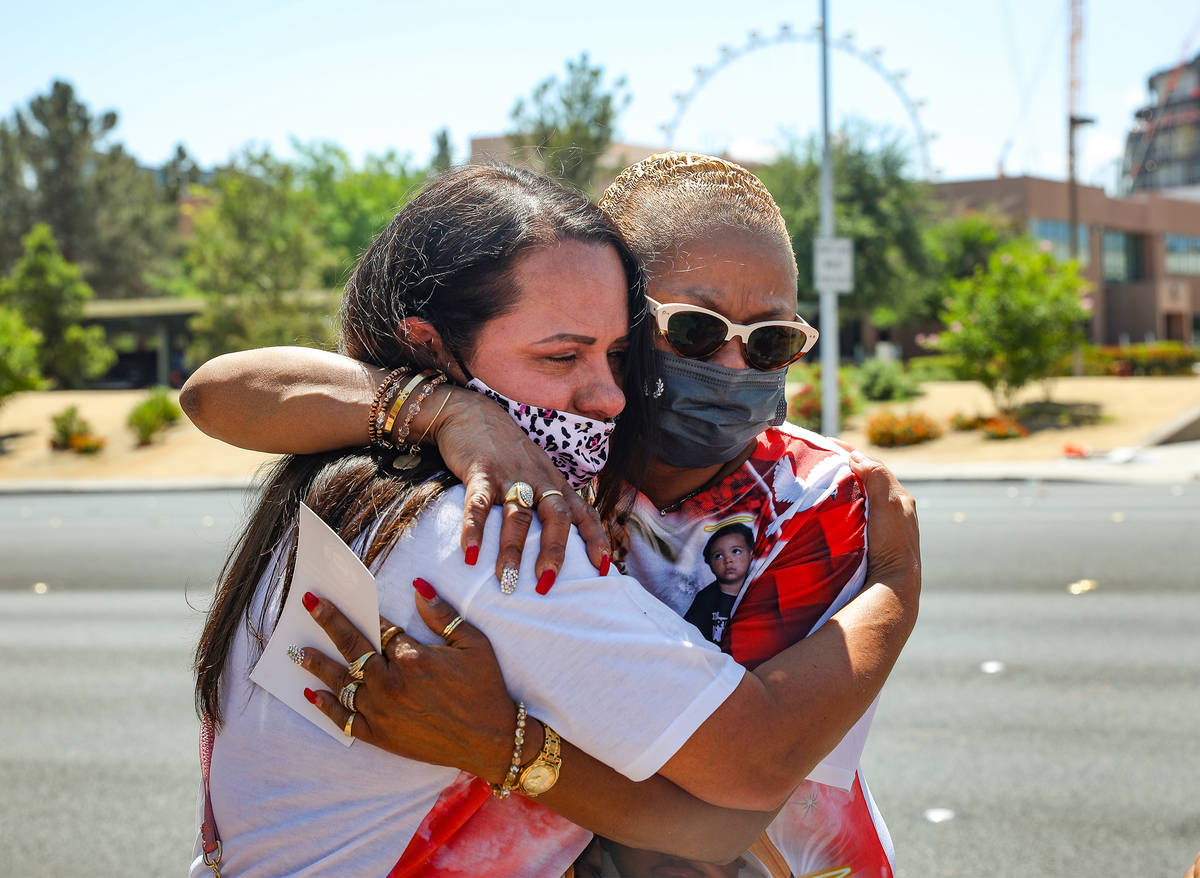 Margarita Edwards, left, with Nevada Child Seekers, comforts Lisa Stovall, right, grandmother to 2-year-old Amari Nicholson, who was killed this month, at a balloon release in his honor outside the Emerald Suites in Las Vegas on Monday, May 17, 2021. (Rachel Aston/Las Vegas Review-Journal) @rookie__rae 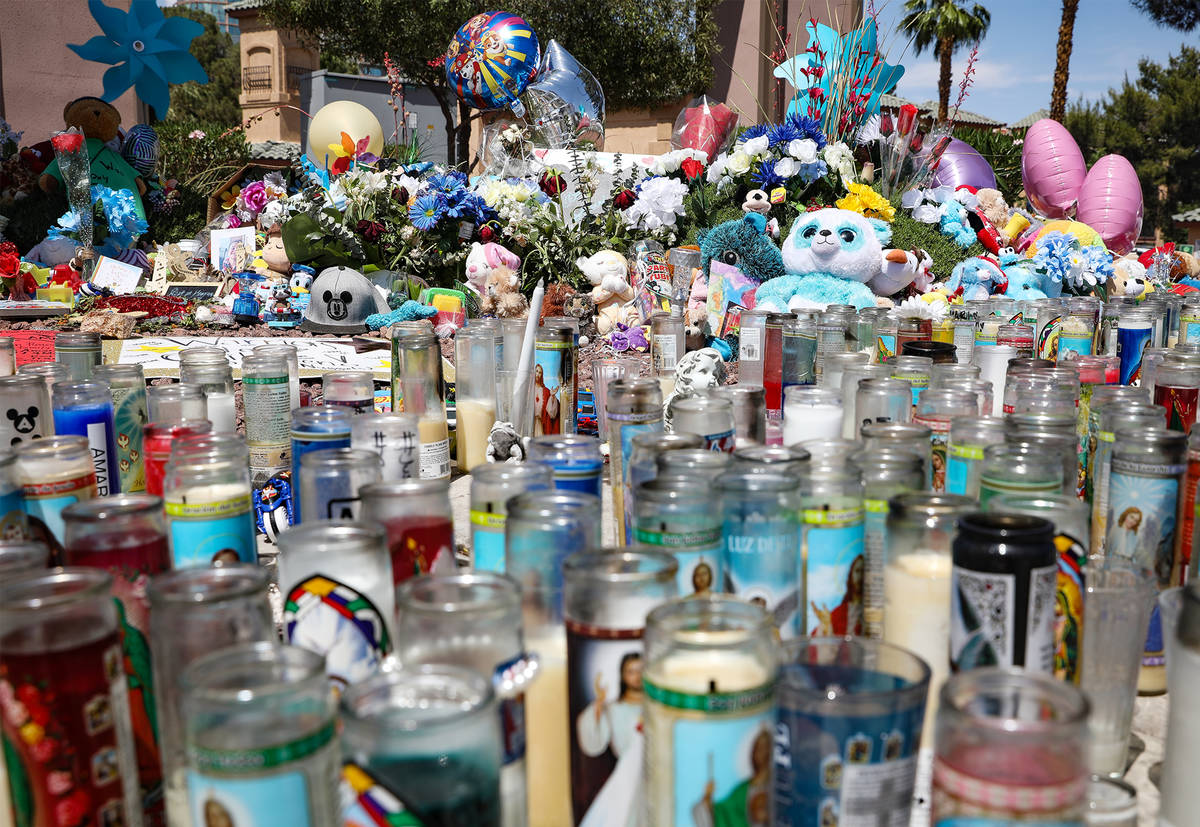 Candles and trinkets for 2-year-old Amari Nicholson, who was killed earlier in the month, near a balloon release in his honor outside the Emerald Suites in Las Vegas on Monday, May 17, 2021. (Rachel Aston/Las Vegas Review-Journal) @rookie__rae 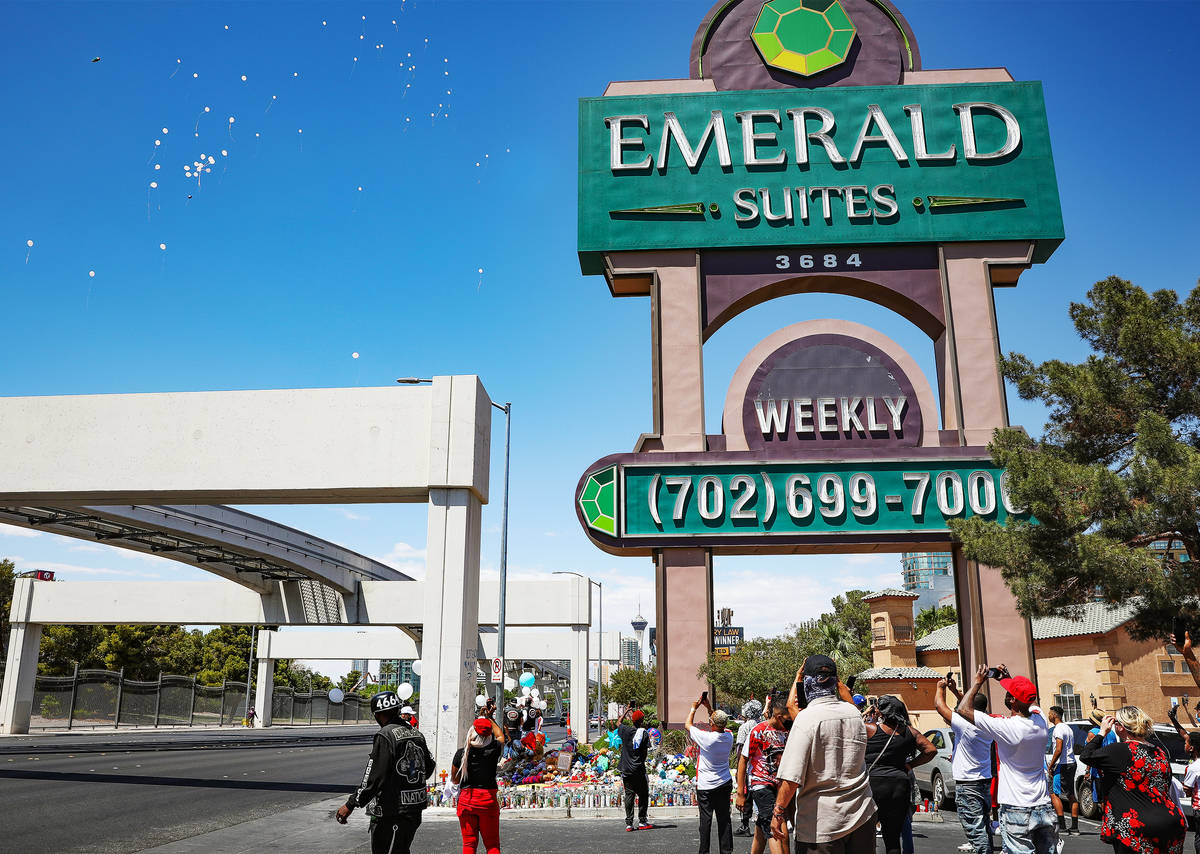 Friends and family watch after they release balloons in honor of 2-year-old Amari Nicholson, who was killed this month, outside the Emerald Suites in Las Vegas on Monday, May 17, 2021. (Rachel Aston/Las Vegas Review-Journal) @rookie__rae 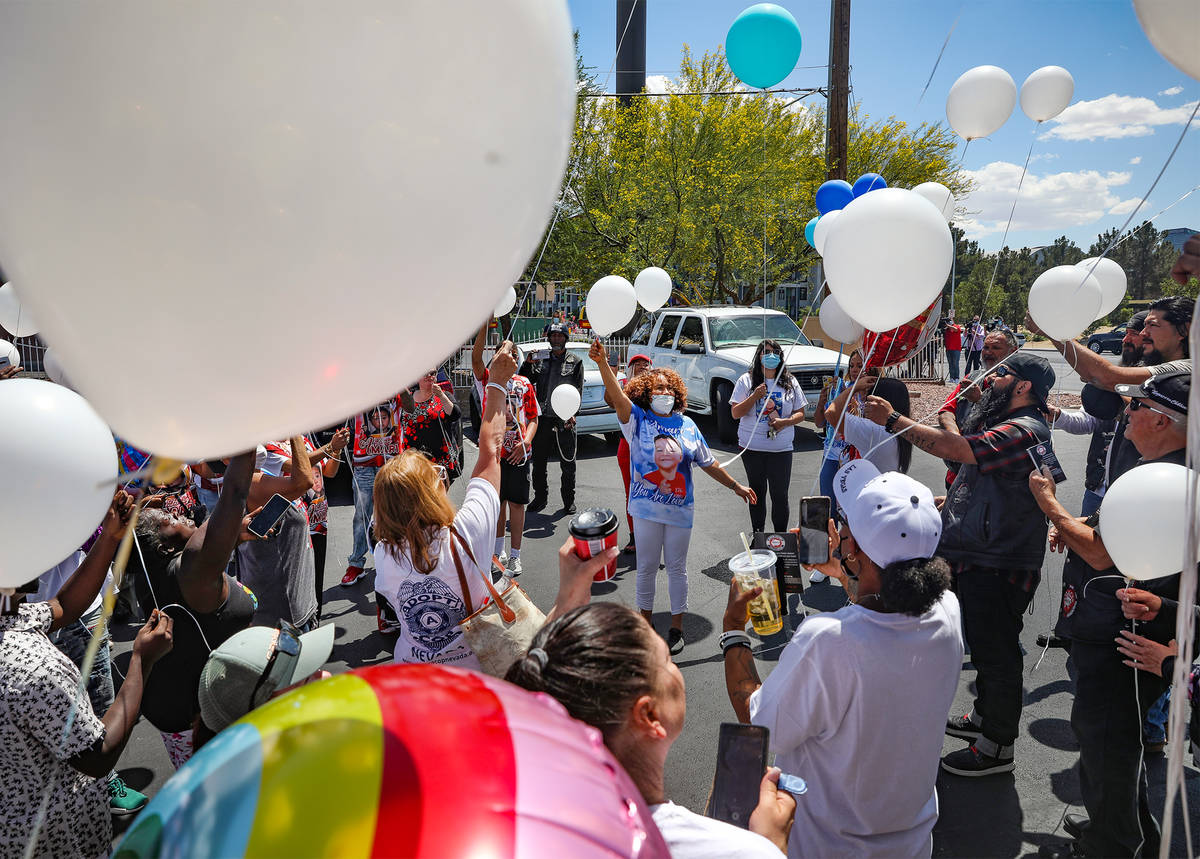 Zak Ramons, center, aunt to Amari Nicholson, leads a balloon release in honor of Amari, the 2-year-old who was killed this month, outside the Emerald Suites in Las Vegas on Monday, May 17, 2021. (Rachel Aston/Las Vegas Review-Journal) @rookie__rae 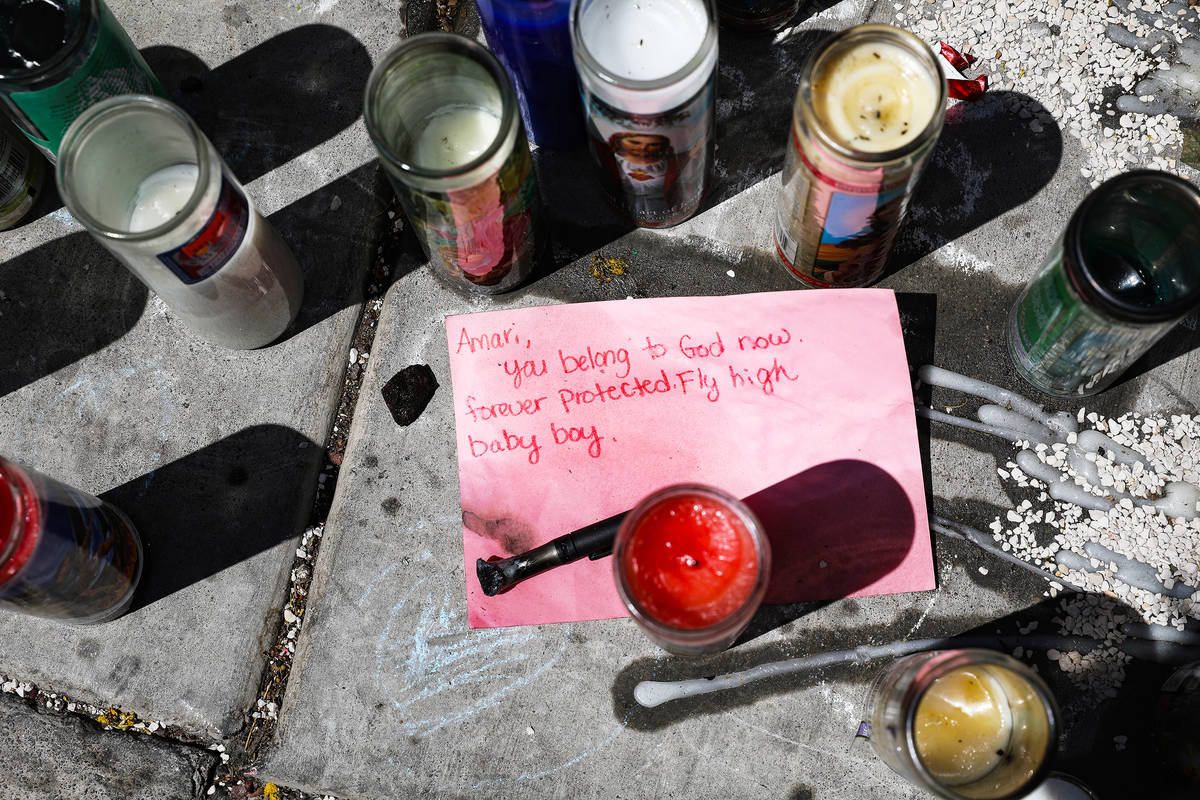 A note for 2-year-old Amari Nicholson, who was killed this month, near a balloon release in his honor outside the Emerald Suites in Las Vegas on Monday, May 17, 2021. (Rachel Aston/Las Vegas Review-Journal) @rookie__rae 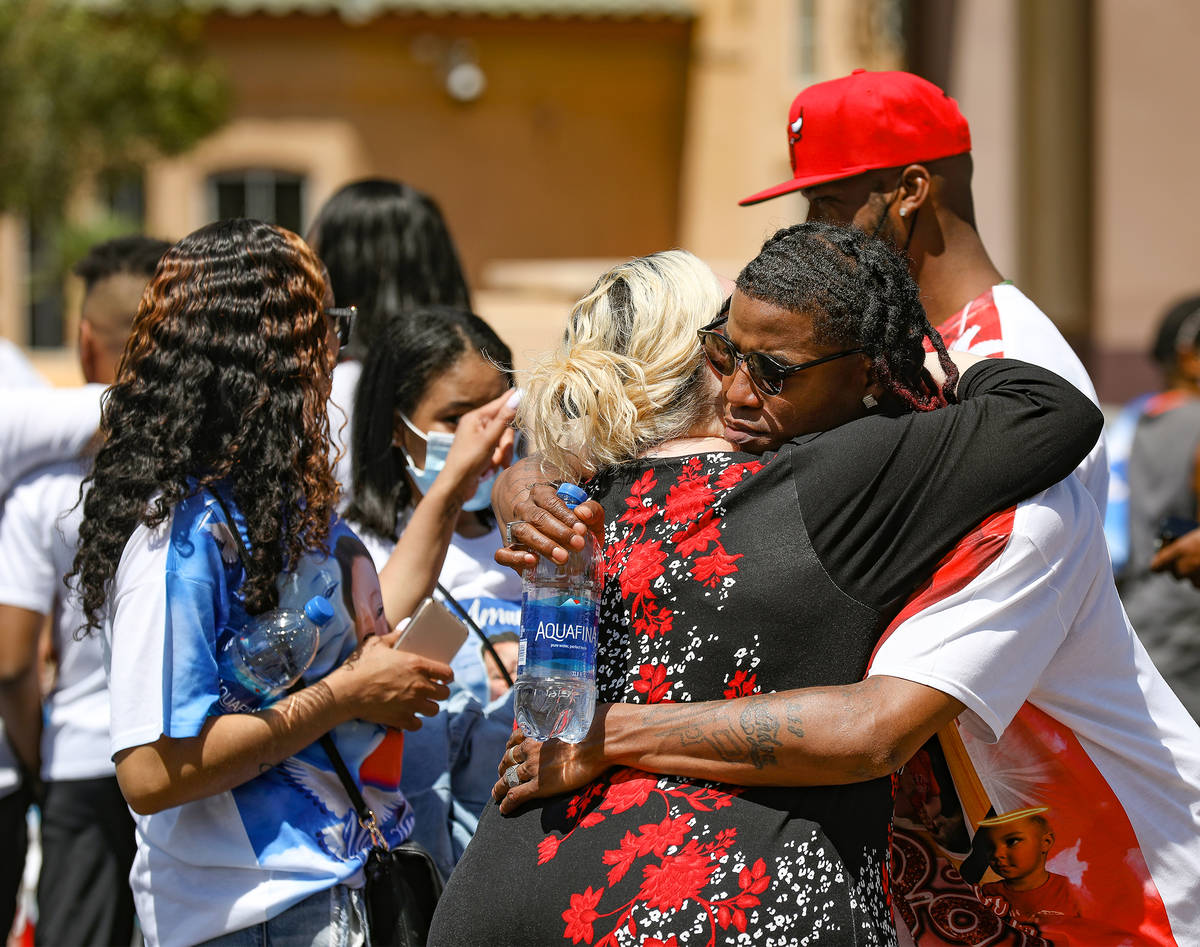 Erica Hayes, left, hugs Jyrgio Hayes, right, her brother-in-law and father to 2-year-old Amari Nicholson, who was killed this month, at a balloon release in his honor outside the Emerald Suites in Las Vegas on Monday, May 17, 2021. (Rachel Aston/Las Vegas Review-Journal) @rookie__rae 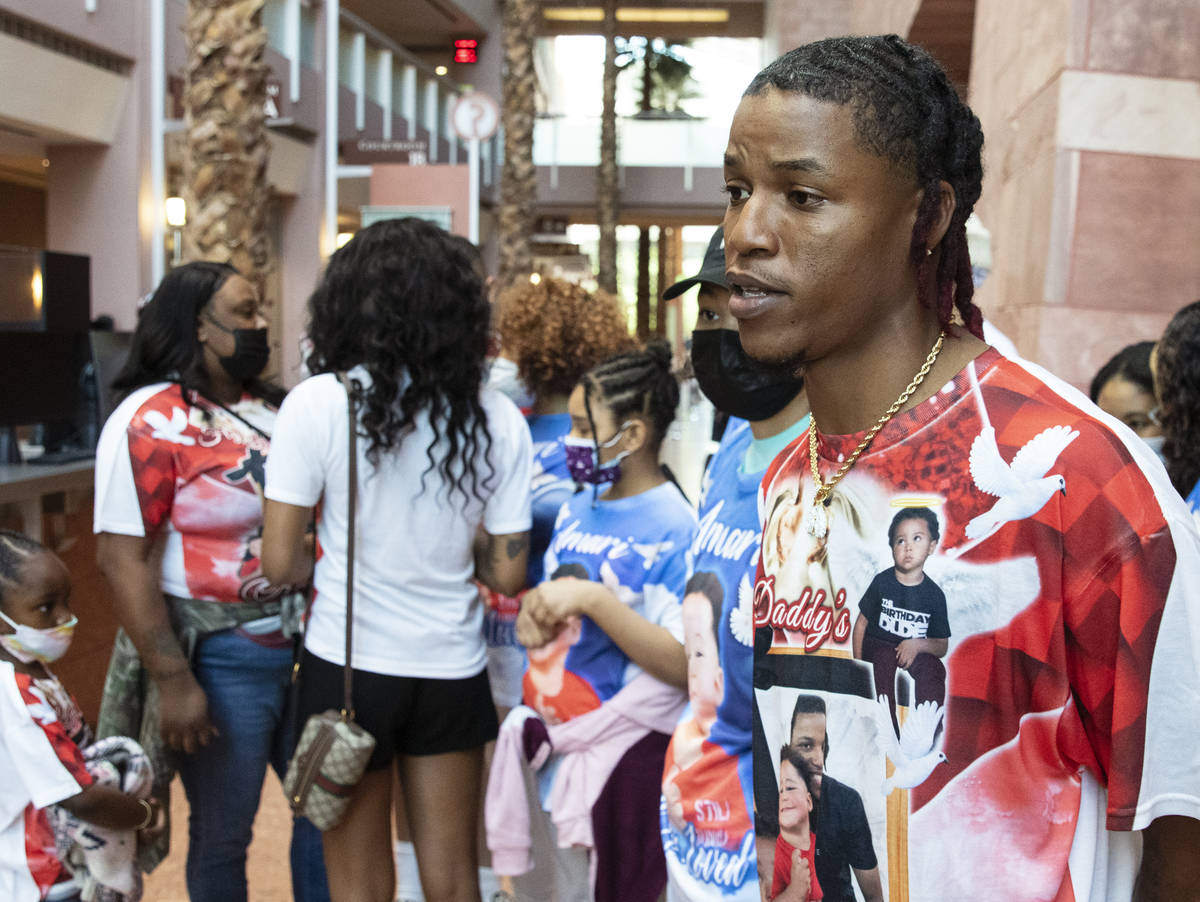 Jyrgio Hayes, the father of 2-year-old Amari Nicholson, speaks to news media at the Regional Justice Center on Monday, May, 17, 2021, in Las Vegas. Amari's body was found Wednesday, one day after Las Vegas police arrested Terrell Rhodes and charged him in the child's death. (Bizuayehu Tesfaye/Las Vegas Review-Journal) @bizutesfaye 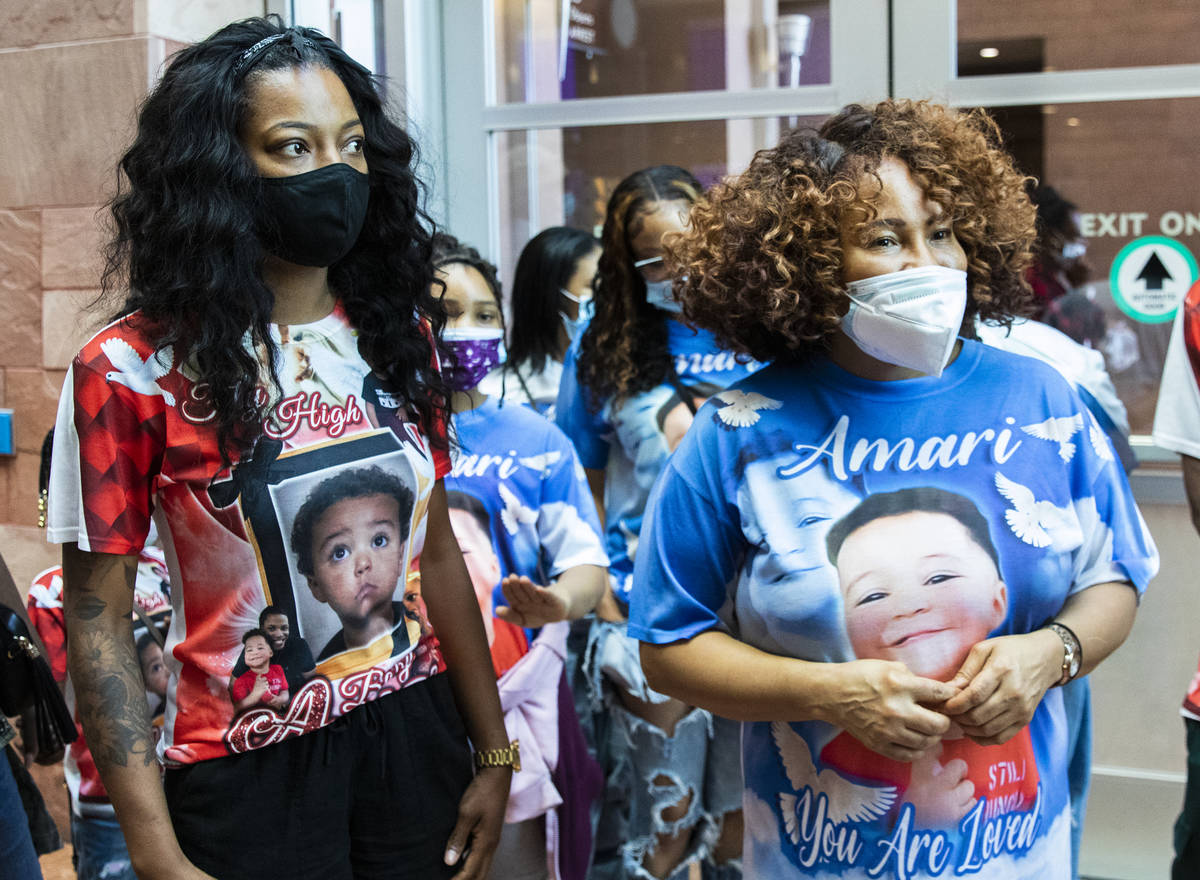 Yolanda Everett, left, and Zak Hayes-Ramos, both aunts of Amari Nicholson, stand outside the courtroom at the Regional Justice Center where a hearing for Terrell Rhodes was held on Monday, May, 17, 2021, in Las Vegas. Rhodes has been charged in the death of Amari, 2. (Bizuayehu Tesfaye/Las Vegas Review-Journal) @bizutesfaye 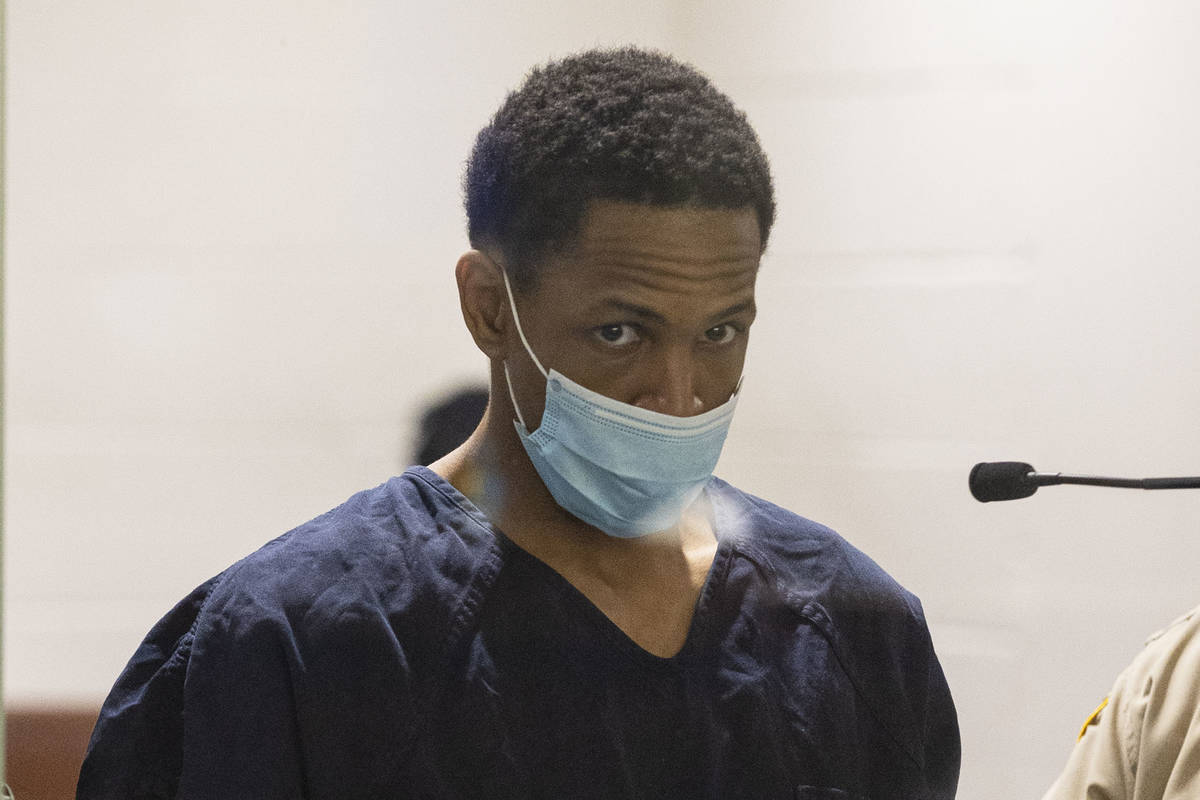 Terrell Rhodes, charged in the killing of Las Vegas toddler Amari Nicholson, appears in court at the Regional Justice Center in Las Vegas on May 12, 2021. (Bizuayehu Tesfaye/Las Vegas Review-Journal) @bizutesfaye

In front of dozens of rows of candles, teddy bears, messages and toy cars, Amari Nicholson’s dad let go a handful of blue and white balloons.

“He was a beautiful spirit,” said Jrygio Hayes, who came from Reno and wore a shirt with a photo of him hugging his child. “I love him and I always will. I want justice for him and everybody involved.”

The balloons floated up over the sign of Emerald Suites apartments, where the 2-year-old lived with his mother and her boyfriend. Police announced on Wednesday that his body had been found in a nearby apartment complex.

On Monday afternoon, his paternal family and friends came from out of state to thank the media, the community and Nevada Child Seekers for their help in the weeklong search for the toddler. As traffic buzzed by on South Paradise Road, some cars honked in solidarity.

“Even though we didn’t get the outcome that we wanted, we hoped that this raised awareness about how important children are,” said one of Amari’s aunts, Yolanda Everett. “And how important it is that you protect your children.”

On April 30, Amari’s mother, Tayler Nicholson, went to Colorado to assist her mother and left Amari with her boyfriend, Terrell Rhodes, police said.

Rhodes, 27, is charged in the death of the toddler, who disappeared May 5. Days before the child was reported missing, she told Rhodes that she was breaking up with him, according to his arrest report.

The suspect eventually told police that he hit Amari after the toddler urinated in his clothes and that he was so upset he struck the child three to four times with a closed fist, the report said.

At some point, Amari turned blue and purple in the face and stopped breathing.

Rhodes also is charged with four counts of resisting a public officer with a firearm and four counts of assault on a protected person with the use of a deadly weapon. Las Vegas homicide Lt. Ray Spencer said Rhodes grabbed an officer’s gun as he was being taken into custody in a police interview room.

Zak Hayes-Ramos, another aunt, said she felt the spirit of Amari guided them throughout the search. The search was going to be expanded from the area where he lived, but Amari didn’t let that happen, she said.

“We were always steps away from him, from where he was. The garbage was never emptied. The garbage was scheduled to be emptied,” she said. “He was there. He cried out to us at all times. He removed every blockage that was in our way.”

Rhodes did not appear in court early Monday for a hearing and is expected to be quarantined for two weeks at the Clark County Detention Center, where he is being held without bail, Justice of the Peace Harmony Letizia said.

After the court hearing, Amari’s paternal family members and friends stood outside the courtroom wearing vibrant shirts depicting Amari as an angel.

The shirts were printed with his picture and read “Fly High Baby Amari” and “You are Loved.” His aunts called for accountability and for changes to the Amber Alert law. Police said Amari’s case didn’t meet the requirements under Nevada law.

“We’re here because we still need closure,” Everett said. “We’re coming from all over the country just to show him that Amari had options. He had people that cared about him, and he did not have to go this way. So we want to see Terrell Rhodes in court.”

Another court hearing is set for Tuesday.