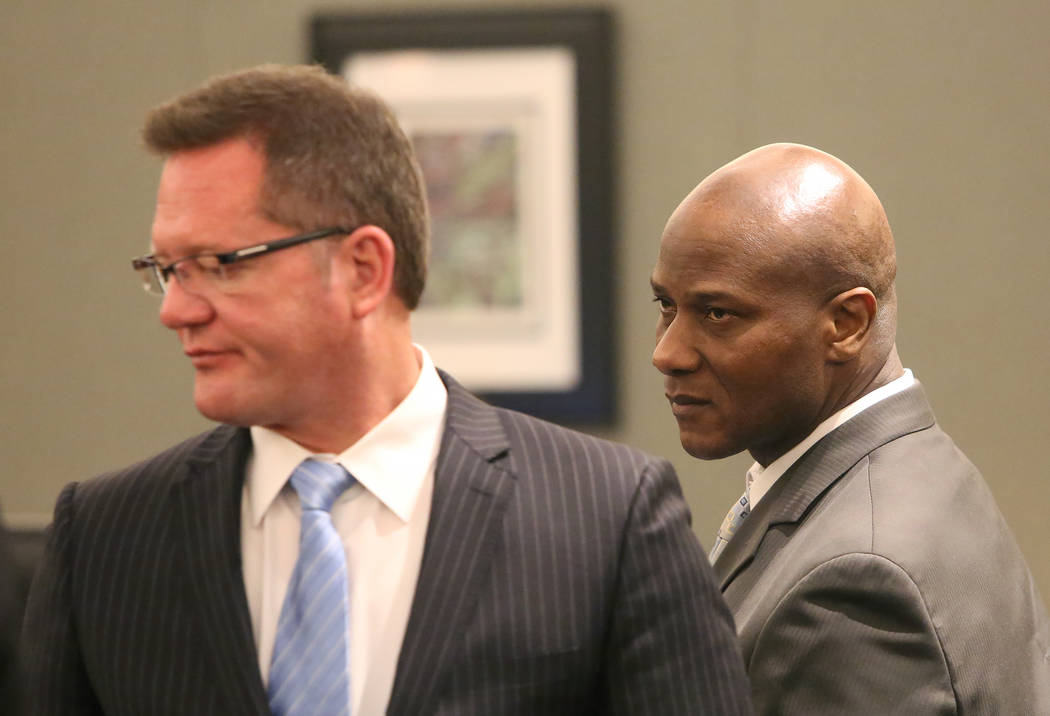 Frederick Richards, right, a former Bellagio club host accused of drugging and raping a woman, and his attorney, Robert Draskovich, appear in court at the Regional Justice Center on Tuesday, May 2, 2017, in Las Vegas. Bizuayehu Tesfaye Las Vegas Review-Journal @bizutesfaye 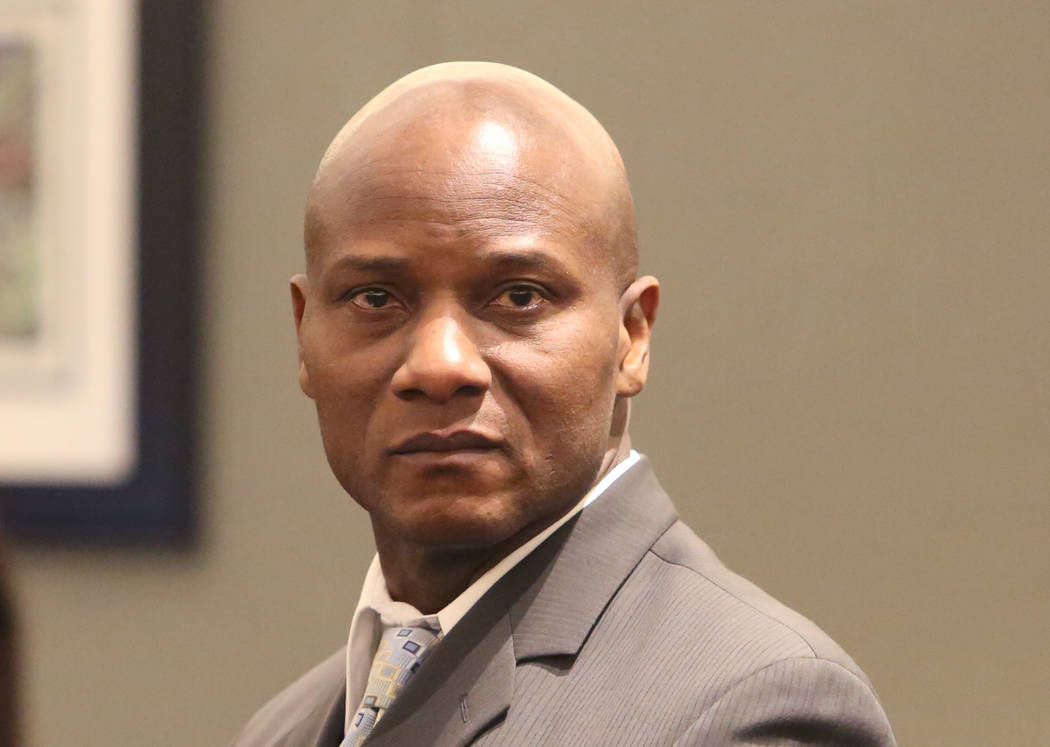 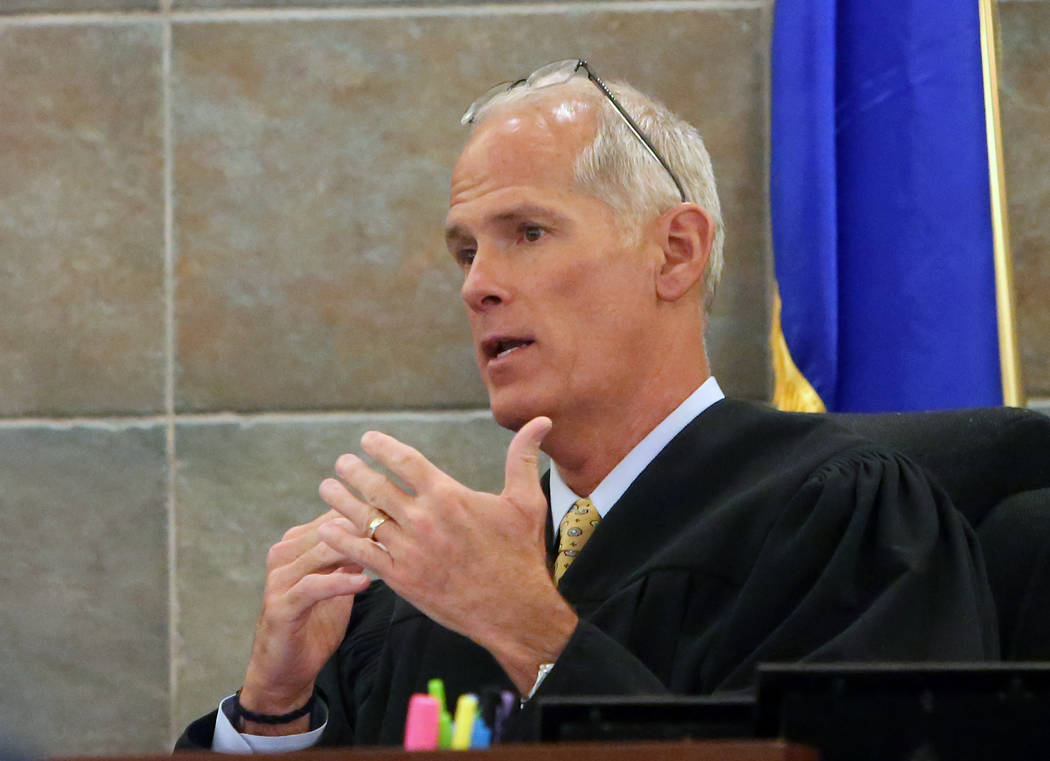 District Judge Douglas Herndon instructs the jury on Tuesday, May 2, 2017, at the Regional Justice Center, in the trial of Frederick Richards, a former Bellagio club host accused of drugging and raping a woman. Bizuayehu Tesfaye Las Vegas Review-Journal @bizutesfaye

Two California women testified Wednesday in the rape trial of a former nightclub promoter, and fought back tears as they described similar sexual assaults that occurred in 1997 and 2002.

State prosecutors called the women as witnesses in the trial of Frederick Richards, 51, who is accused of kidnapping and sexually assaulting a 25-year-old woman he met at Hyde nightclub in 2014. Authorities who investigated the 2014 case used DNA evidence to identify him as the suspect in the California assaults, which went unsolved for nearly two decades.

In all three cases, the women said they met Richards at a club during a night out. All of the women testified that within hours of meeting Richards, they were led out of the club and raped.

Richards admits he had sex with all three women. But his defense attorney argues he was a skilled philanderer, well-versed in the nightclub game, rather than a serial rapist.

Prosecutors have neither referenced nor produced evidence that any of the women had date rape drugs in their system when they submitted to forensic examinations the day after their alleged sexual assaults. But it is apparent, from questions they have posed to witnesses, that they want jurors to infer that Richards slipped something in two of the women’s drinks.

The woman in the 1997 case told jurors that the drink Richards bought her was the only one she consumed all night. She also said she ingested a “small line” of cocaine before arriving at the club.

Soon after imbibing the drink Richard purchased, the woman testified, she started to experience a substance-induced blackout. She said she remembers being carried out of the nightclub, slung over Richards’ shoulder. She described herself as feeling physically “paralyzed” as Richards carried her to his vehicle.

“It’s like my mind was shut down … there was nothing happening mentally at all and I was just not able to think at all,” she told Clark County Assistant District Attorney Rob Stephens.

Her testimony was strikingly similar to that of the alleged victim in the 2014 case, who said that after consuming a drink Richards purchased, “everything else vanished.”

The woman in the 1997 case, who is now 50, said Richards drove her to her own apartment, and they somehow ended up in her bedroom.

Defense attorney Robert Draskovich used cross-examination to suggest the woman was not being truthful in her sworn statements. He referenced a statement in which she said her rapist wore a baseball cap.

“Are you aware that one cannot wear a baseball cap at the Coconut Teasers club?” Draskovich asked.

“I have no idea what their policy was 20 years ago,” the woman replied.

Richards is on trial for one count of kidnapping and two counts of sexual assault in the 2014 case. He will not be prosecuted in the 1997 case, as the statute of limitations expired by the time he was identified as a suspect. He faces charges in California in the 2002 case.

The woman in the 2002 case testified that she went to Richards’ vehicle after dancing with him, and they started kissing. She said that she screamed “no” when Richards tried to have sex with her, but he kept going.

Under cross-examination, she admitted to returning to the nightclub with Richards after the incident to introduce him to her friends, and described herself as being “in this weird haze.”

The woman in the 2002 case was the last witness prosecutors called to testify Wednesday. After she stepped down from the witness stand and left the courtroom, loud sobs echoed through the courthouse’s halls. Richards sat at the defense table, stone-faced.