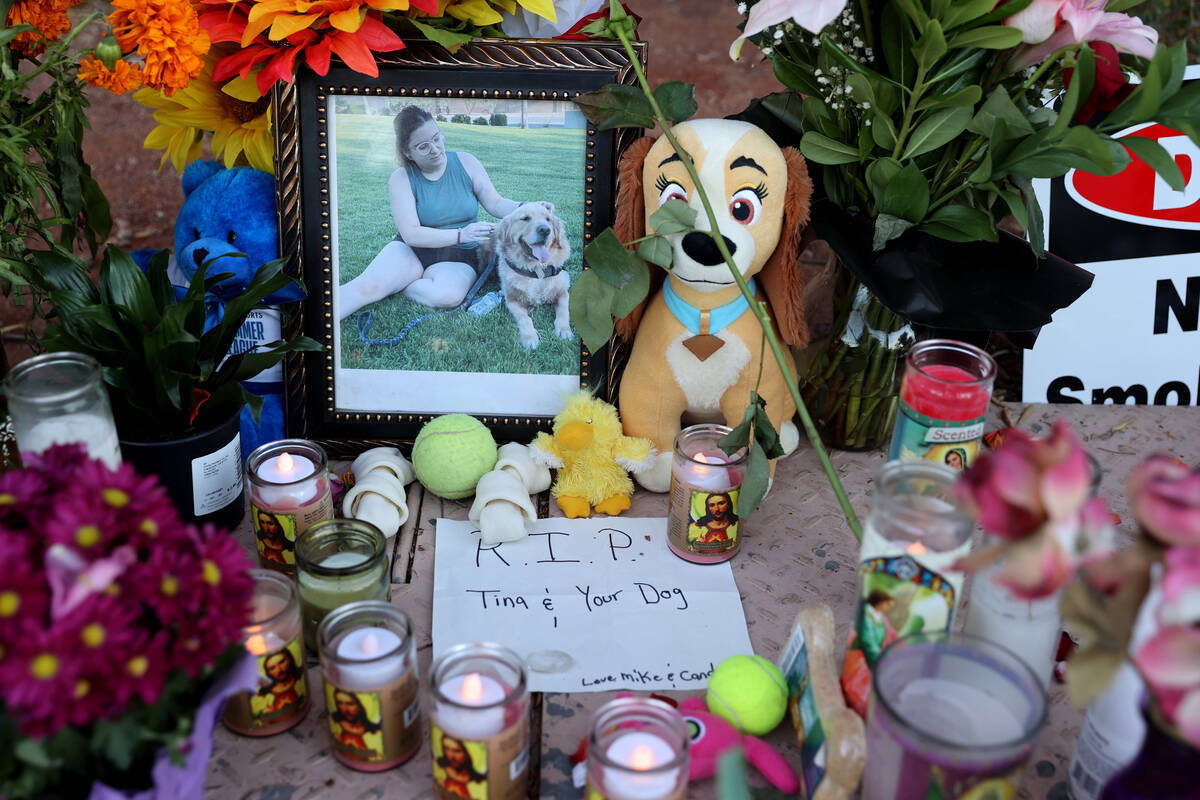 A photo of Tina Tintor and her dog Max in a memorial at Rainbow Boulevard and Spring Valley Parkway on Thursday, Nov. 4, 2021, near the crash site where she was killed in a fiery crash involving Raiders star Henry Ruggs. (K.M. Cannon/Las Vegas Review-Journal) @KMCannonPhoto 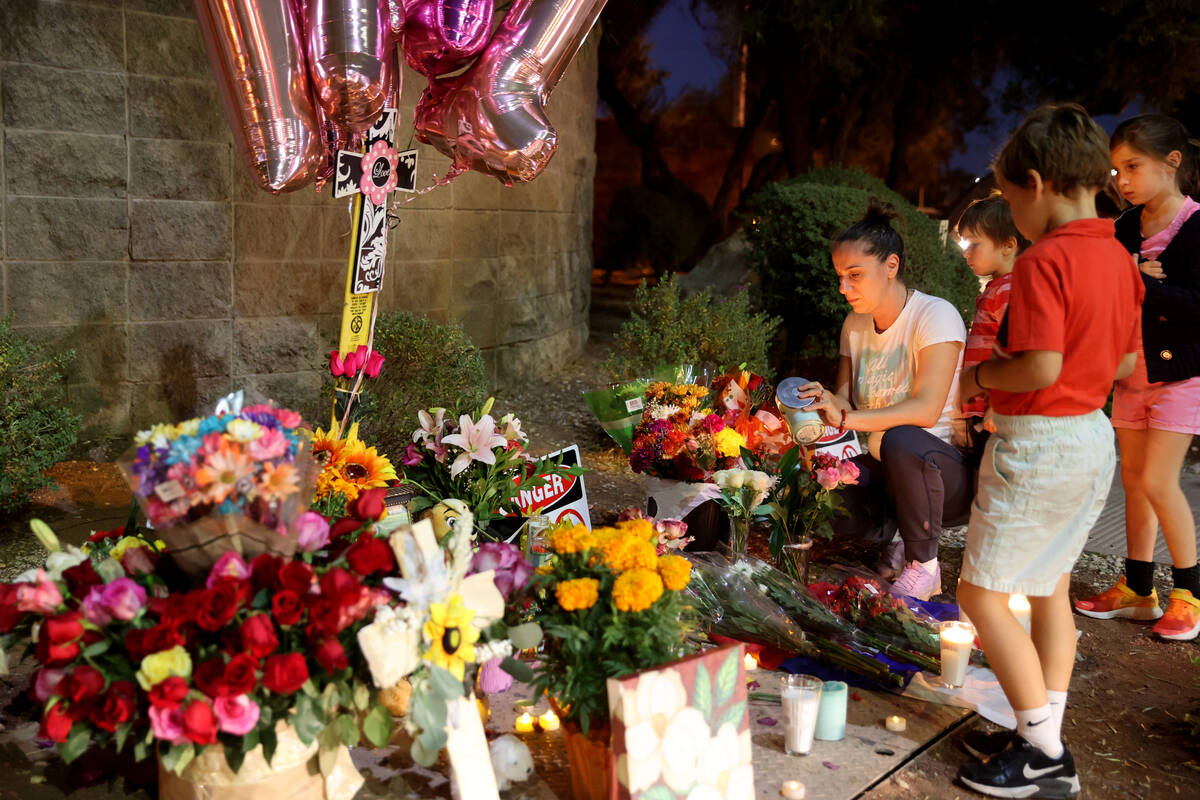 Close family friends of Tina Tintor, who declined to give their names, light candles at a her memorial at Rainbow Boulevard and Spring Valley Parkway Thursday, Nov. 4, 2021, near the site where she was killed in a fiery crash involving Raiders star Henry Ruggs. (K.M. Cannon/Las Vegas Review-Journal) @KMCannonPhoto 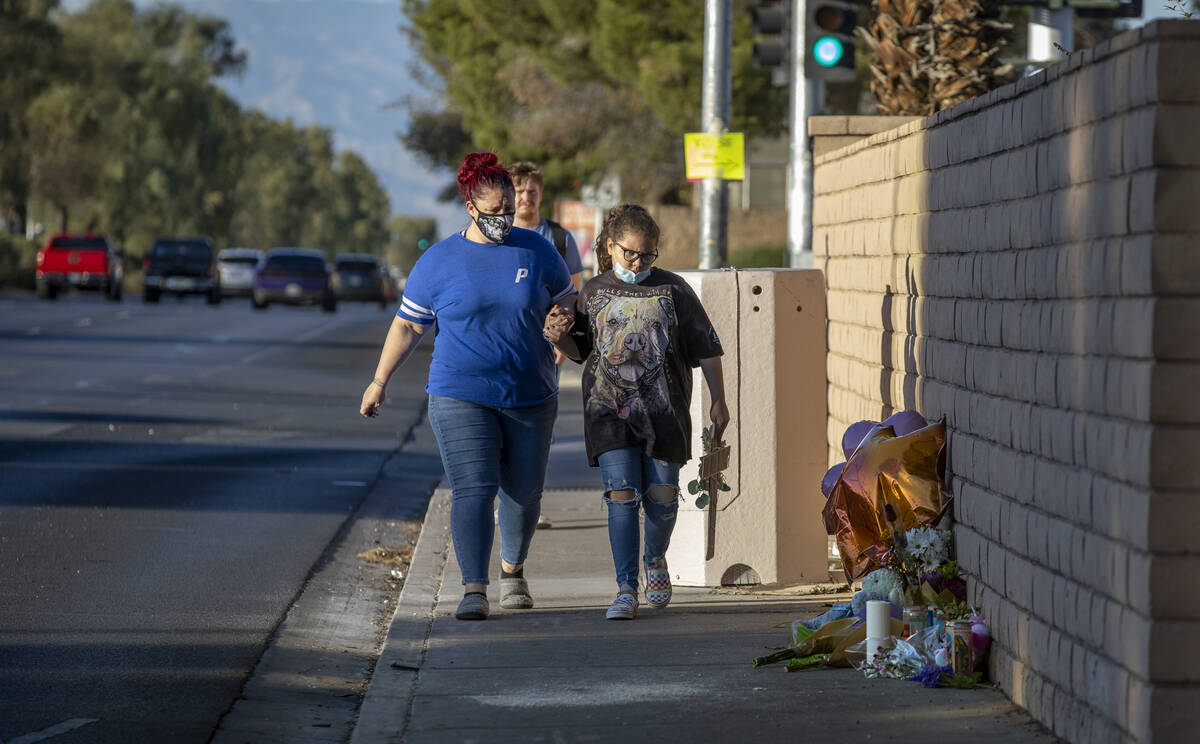 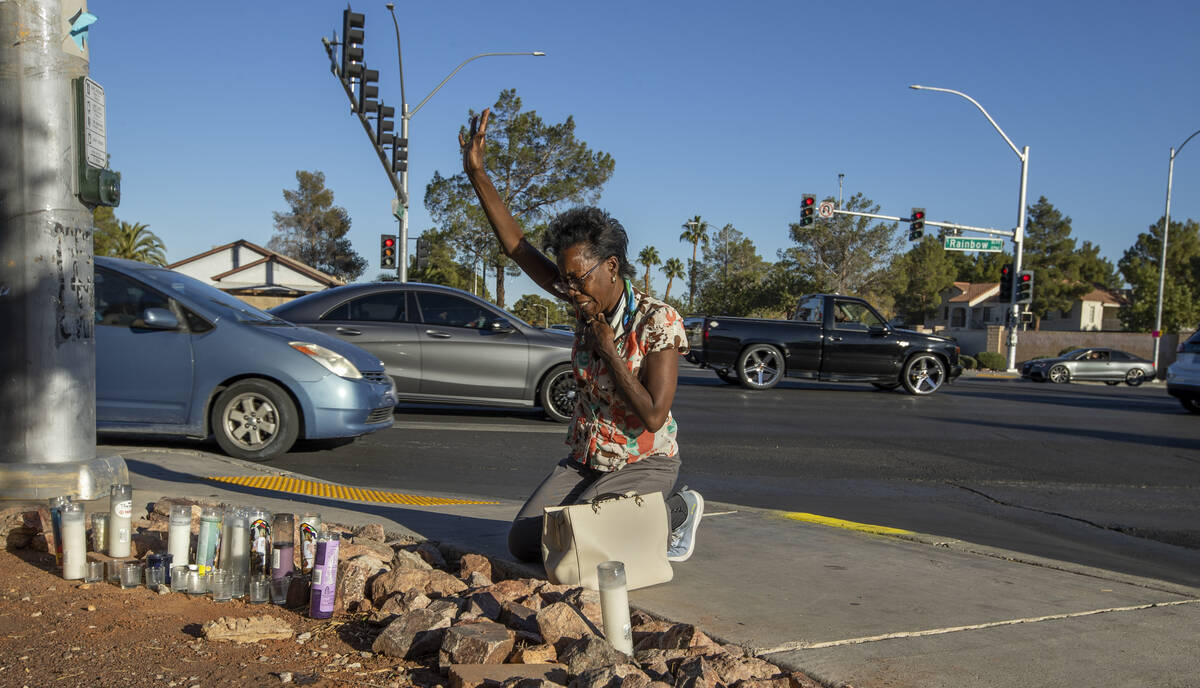 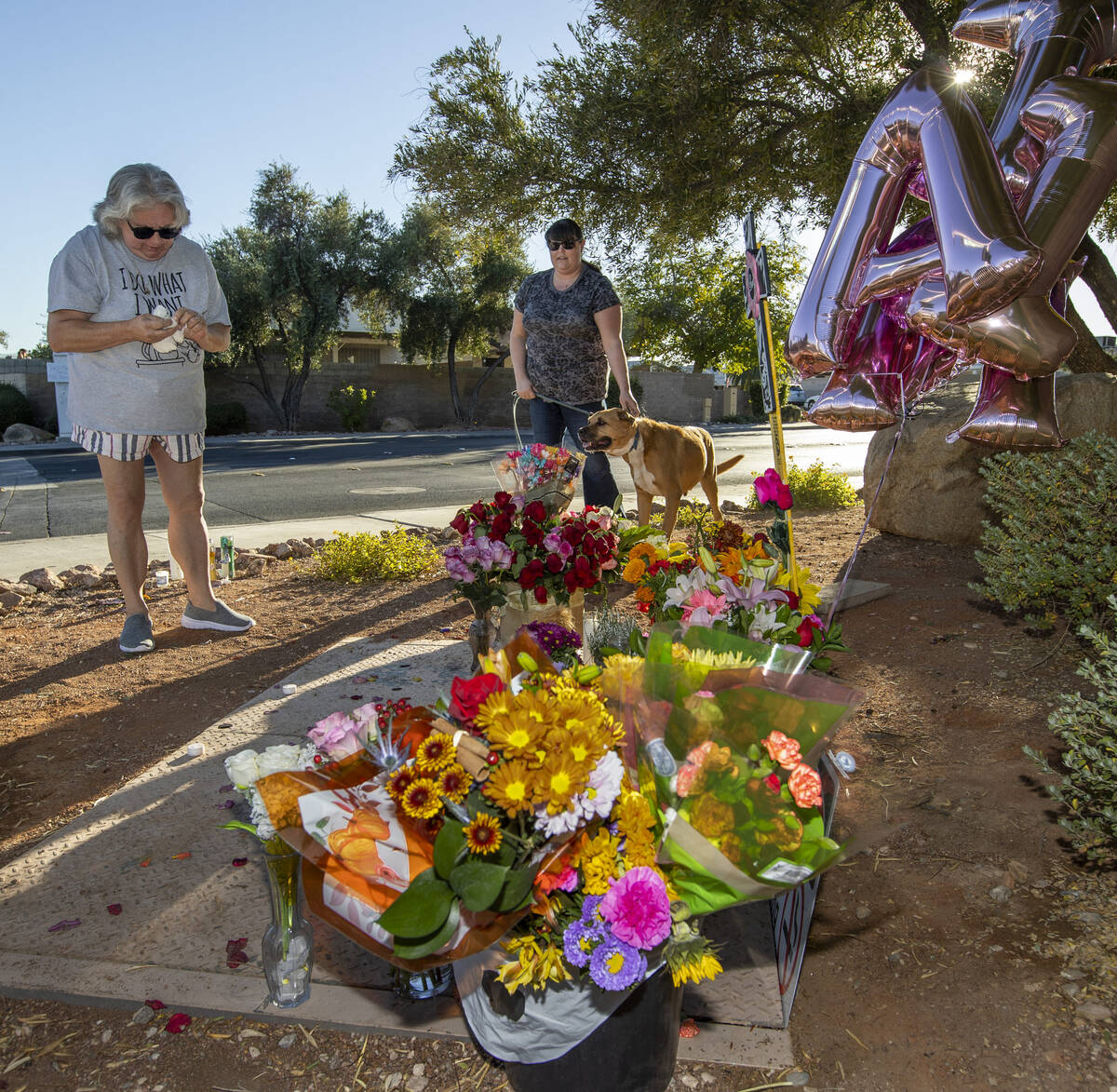 From left, Linda and Megan Bendon with dog Rhett stop to light a candle and leave a stuffed dog on Thursday, Nov. 4, 2021, at a roadside memorial for Tina Tintor near the site where she was killed two days earlier in a crash involving Raiders star Henry Ruggs. It is on the corner of Rainbow Boulevard and West Spring Valley Parkway in Las Vegas. (L.E. Baskow/Las Vegas Review-Journal) @Left_Eye_Images 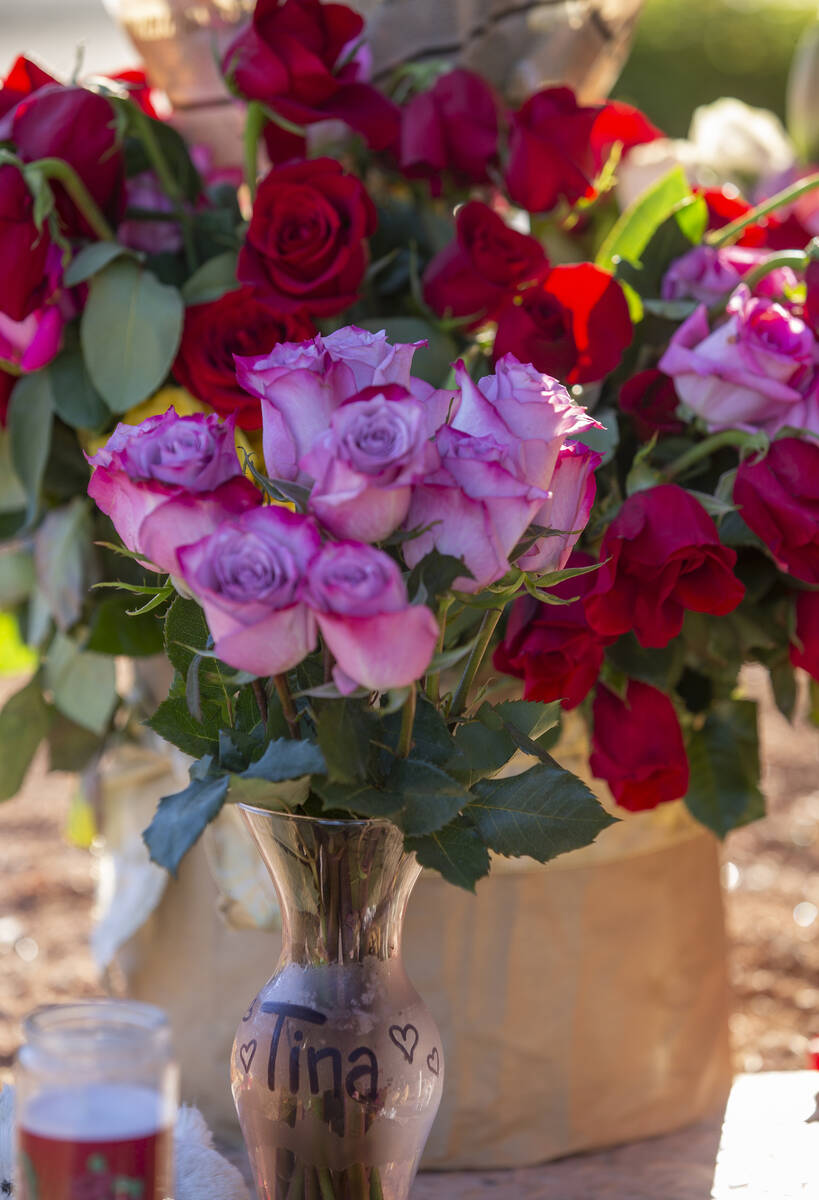 Flowers for Tina Tintor at a roadside memorial on Thursday, Nov. 4, 2021, near the site where she was killed two days earlier in a crash involving Raiders star Henry Ruggs. It is on the corner of Rainbow Boulevard and West Spring Valley Parkway in Las Vegas. (L.E. Baskow/Las Vegas Review-Journal) @Left_Eye_Images 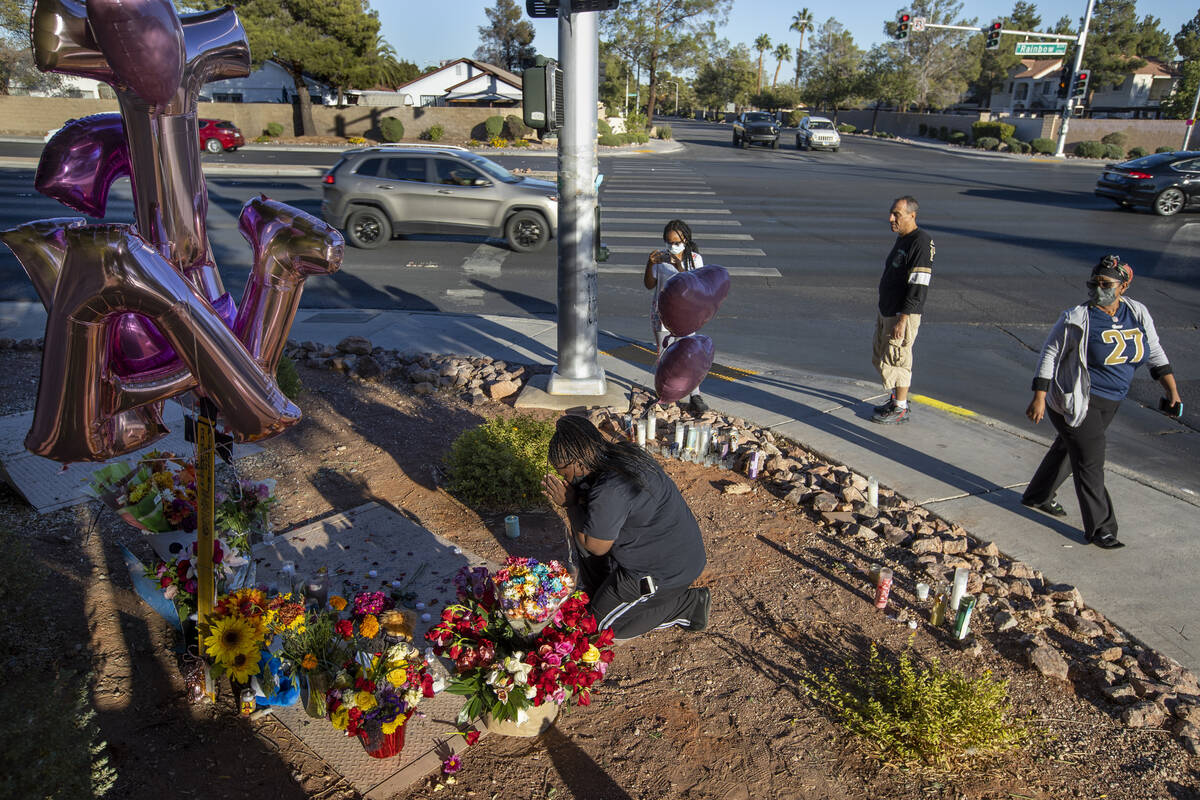 Johnesha Gilbert, center, brings pink balloons to leave at a roadside memorial on Thursday, Nov. 4, 2021, for Tina Tintor near the site where she was killed in a crash involving Raiders star Henry Ruggs. It is on the corner of Rainbow Boulevard and West Spring Valley Parkway in Las Vegas. (L.E. Baskow/Las Vegas Review-Journal) @Left_Eye_Images NOTE: Others declined to be identified 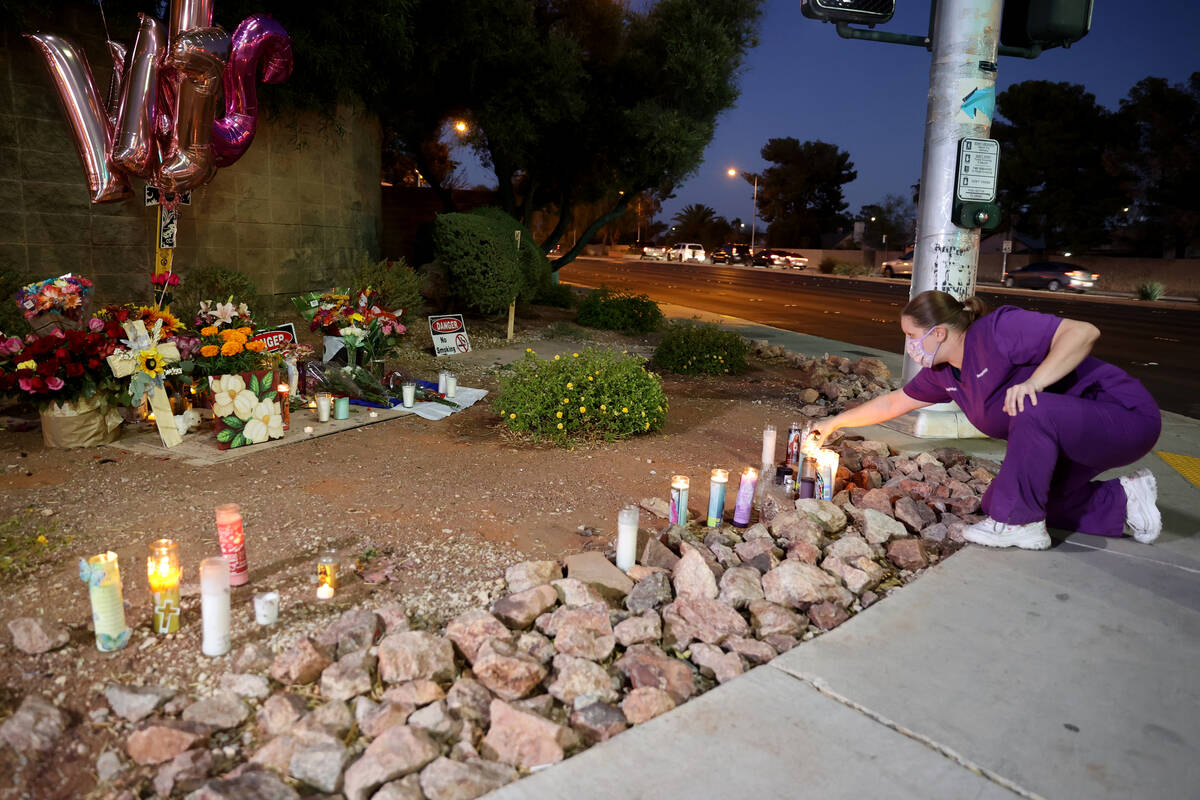 Jennifer Williams of Henderson lights candles at a memorial for Tina Tintor and her dog Max at Rainbow Boulevard and Spring Valley Parkway on Thursday, Nov. 4, 2021, near the site where Tintor and her dog were killed in a fiery crash involving Raiders star Henry Ruggs. (K.M. Cannon/Las Vegas Review-Journal) @KMCannonPhoto

The family of Tina Tintor said Thursday that it has been devastated by her death in a fiery crash involving Raiders star Henry Ruggs.

“Tina’s tragic loss has devastated her family beyond a grief they could ever comprehend,” a statement from the family’s attorney, Farhan Naqvi, reads. “Family was everything to Tina, and she was the light of her parents’ life.”

Tintor was on her way home to her family early Tuesday when a speeding Chevrolet Corvette Stingray driven by Ruggs slammed into the back of her Toyota RAV4, which burst into flames, according to authorities.

The impact sent Tintor’s SUV hurtling down Rainbow Boulevard for more than 570 feet before it came to rest near the intersection of Spring Valley Parkway.

Tintor and her 3-year-old golden retriever, Max, died inside the SUV after failed rescue efforts by several bystanders who had stopped to help. Tintor was 23.

Among those bystanders was Alexander Hart, a deputy chief security guard for Northstar Defense Corporation and former law enforcement officer. Through the company’s president, Eli Hill, the security guard declined an interview request from the Las Vegas Review-Journal.

But Hill, who spoke “in depth” with Hart after the crash, released a statement Thursday evening to the newspaper on the guard’s behalf.

Hart was patrolling a nearby condominium complex when the Corvette sped by on Rainbow Boulevard, catching Hart’s attention. Seconds later, according to the statement, Hart heard the screeching of tires followed by “a loud collision.”

The security guard immediately jumped into his vehicle “to locate the source of the sound.” Soon, the fiery crash came into view, and he radioed to Northstar Defense dispatch center, requesting police, the fire department and medical personnel.

“Deputy Chief Hart attempted to get the victim out of the vehicle but was unable to due to rapidly accelerating fire and smoke,” the statement reads.

After backing away from the flames, Hart ran to the Corvette and offered Ruggs and his girlfriend assistance until first responders arrived.

“We are not surprised by the actions of Deputy Chief Hart,” the statement concluded. “Deputy Chief Hart is a former law enforcement officer and helping others is just the type of man he is.”

As of Thursday, Hill told the Review-Journal, Hart “was doing as well as one would given what he experienced. He is a good man and a trooper.“

Ruggs faces charges of DUI resulting in death and reckless driving in connection with the crash. The Raiders released the 22-year-old wide receiver from the team on Tuesday evening.

Seemingly overnight, the crash that sent shockwaves throughout the NFL and the Las Vegas community pushed the young woman’s relatives into the public eye. Tintor’s parents have not spoken publicly about her death.

Her older brother, Djordje, separately told USA Today that his parents were maintaining their privacy after the crash.

“They’re not comfortable with the attention and everything,’’ Djordje Tintor said. “They just want to grieve in their way.’’

According to USA Today, the Tintor family had escaped war-torn Serbia in 2000, two years after Tina Tintor was born.

She had called Las Vegas home since she was a baby, according to the family’s statement. At the time of the crash, she was about 2 miles away from the house her family has owned since 2004.

Since Tuesday, two makeshift memorials with candles and bouquets of flowers have grown considerably at the crash site. At the center of one of the memorials sits a framed photo of Tina Tintor and Max on a grassy field.

There, in front of the photo, two tearful young women sat on the ground Thursday afternoon. One carefully unwrapped a candle and later flicked a lighter, putting the flame to the candle and incense sticks.

Helium-filled balloons that spelled “TINA” dangled in the tepid breeze. A tennis ball apparently placed for the dog rested there, too.

A visitor, who only wanted to be identified as Kathy, said she has lived in the area for three decades. Although she didn’t know Tina Tintor, she said, she was moved enough to buy flowers in her honor.

When the florist found out Kathy’s destination, she discounted the bouquet from $60 to $10.