With tears streaming down her face Thursday night, 15-year-old Kelsi Jackson stood in front of a memorial and questioned how anyone could kill her mother, 39-year-old Jennifer Ratay.

“I think the man who did this was sick,” said Jackson, her voice shaking as she read from her phone. “I don’t understand how any human can go and hurt another human for their pleasure. My mom didn’t deserve this.”

Jackson and her grandmother, Mary Ann Ratay, were with about 30 of Jennifer Ratay’s friends Thursday night outside the home where her body was found two days earlier. Jennifer Ratay was reported missing early Tuesday, leading Metropolitan Police Department officers to a home on Garden Grove Avenue, near Rainbow Boulevard and Flamingo Road.

There, investigators found her body inside a 55-gallon drum in the garage. During a court appearance Wednesday, prosecutors said the suspect in her killing, 38-year-old Chuck Chaiyakul, confessed to shooting and killing the woman and placing her in the drum in his garage.

She was last seen either late Aug. 29 or early Aug. 30. Friends on Thursday were unsure if the man arrested in her death was a stranger or if the two were acquaintances.

“I’m still trying to piece it together myself,” said 42-year-old Mario Smith, who was one of Jennifer Ratay’s childhood friends.

Smith said he knew Jennifer Ratay since their teenage years, when they spent practically every weekend together roller skating in Las Vegas with friends.

Smith said the two used to “sleep and breathe skating,” and before her death, she had plans to organize a reunion roller skating party on Halloween.

“To be honest I’m not going to be OK, and I don’t think I will be for awhile,” the teen said, later adding “she was very young, and she did have her ups and downs, but she always made sure that me and my grandma were OK.”

Mary Ann Ratay spoke about the time her daughter rode a bus across Las Vegas to sit with her during a hospital stay and how her daughter “snuck fried chicken into the room” for her to eat.

She said the last time she heard from her was about two weeks ago, when her daughter sent a text message reminding Mary Ann Ratay to “think positive thoughts.”

Ted Hamilton, who helped organize the vigil, said he wanted to bring Jennifer Ratay’s friends together.

“They need to know how much support she has,” the 41-year-old said. “Her daughter needs to be here and see how many friends she has.”

Hamilton, who said he also met Jennifer Ratay while skating as a teenager, described the 39-year-old as bright, cheery and outgoing.

He said she had a sense of humor, and he laughed when the candles on the sidewalk kept blowing out during the windy evening.

“I can find somewhere to laugh in this — she keeps blowing out my damn candles,” Hamilton said.

Chaiyakul remained in the Clark County Detention Center on Thursday without bail, facing charges of murder with a deadly weapon and being a prohibited person in possession of a gun, jail records show.

A status check is scheduled for Friday morning, but as of Thursday night, a preliminary hearing had yet to be set in the case, court records show.

Jennifer Ratay’s friends on Thursday night said they are still confused about what led to her death. Hamilton said it was important to hold the vigil in front of the home where she was found to “show support.”

“Whether she’s here or not, I think her soul is still crying in that garage,” Hamilton said.

A GoFundMe page has been set up for Ratay. 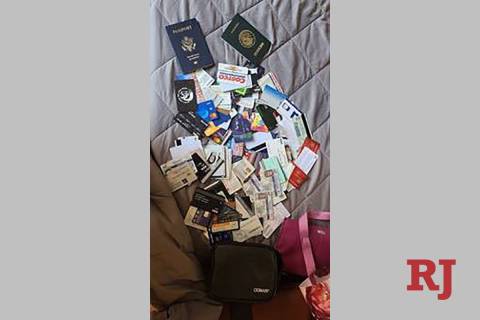 Las Vegas police said they recently arrested a man in possession of more than 200 stolen credit and debit cards and drugs.