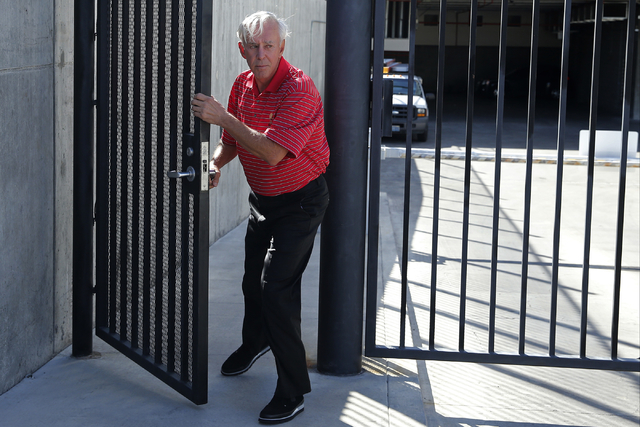 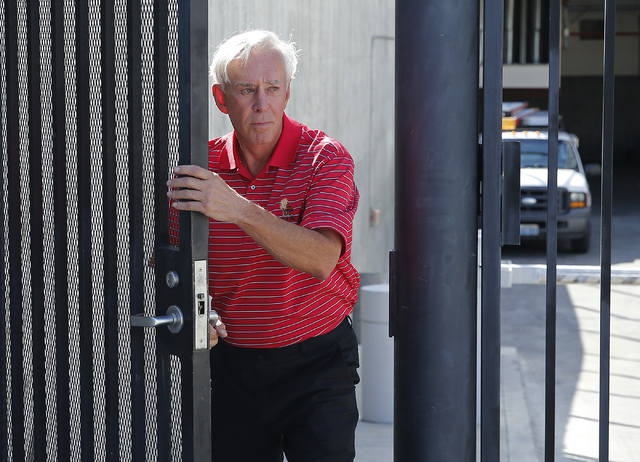 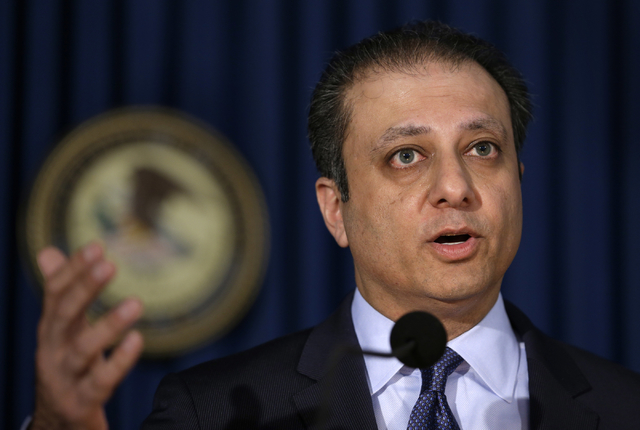 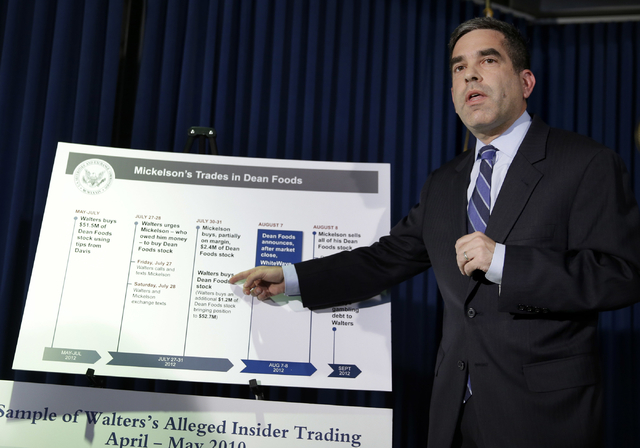 Andrew Ceresney, head of the SEC's Enforcement Division, explains some details of an alleged insider trading scheme during a news conference in New York, Thursday, May 19, 2016. Seth Wenig/Associated Press 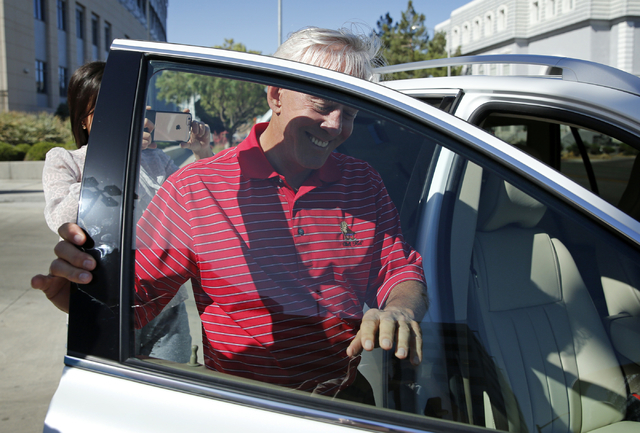 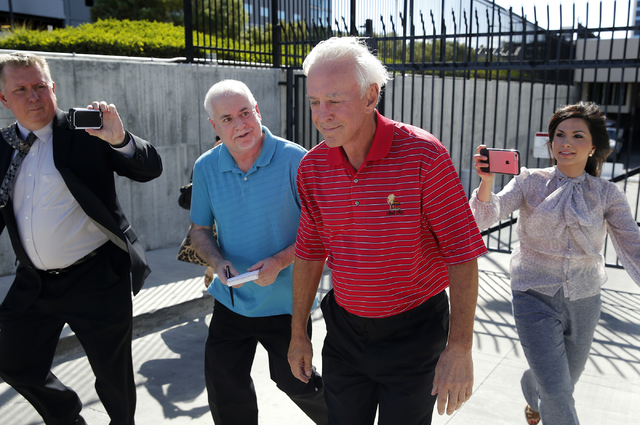 Bill Walters, third from left, is surrounded by reporters as he walks out of the Lloyd George U.S. Courthouse Thursday, May 19, 2016, in Las Vegas. Federal authorities in New York announced an insider trading indictment Thursday against Walters. John Locher/Associated Press 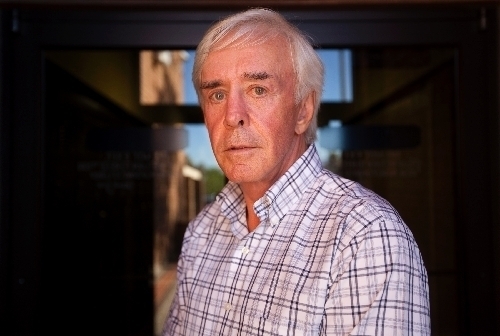 Bill Walters, a politically connected Las Vegas gambler, golf course developer and philanthropist, has been indicted by a federal grand jury in New York in an alleged insider trading scheme.

Walters, 69, who has earned a fortune as a famed sports bettor, and Thomas Davis, the former chairman of Dean Foods Co., were charged in what authorities said was a six-year scheme that included a stock tip that benefited professional golfer Phil Mickelson.

FBI agents assigned to the public corruption squad in Las Vegas, along with IRS criminal investigation agents, arrested Walters on Wednesday afternoon at his Bali Hai Golf Club on the Strip near Mandalay Bay.

After a short hearing Thursday in Las Vegas, U.S. Magistrate Judge George Foley Jr. ordered Walters released on a $1 million bond with a $100,000 cash deposit. Foley also ordered Walters, dressed in a short-sleeved red shirt and black pants, to be transferred back to New York to face the felony charges.

Walters’ Las Vegas lawyer, Richard Wright, told Foley that he had come to court with a $100,000 cashier’s check from his client.

As part of his release, Walters agreed to surrender his passport and medical marijuana certificate and turn over his firearms to a third party. His travel is restricted to the United States, and he has a tentative June 1 court appearance in New York.

About an hour after the hearing, Walters left through a back entrance of the federal courthouse, politely dodging questions from waiting reporters, as he was whisked away in a white vehicle.

Earlier in the day, Walters denied wrongdoing through his New York lawyer.

Davis, 67, who resigned from Dean Foods’ board in August, pleaded guilty in the insider trading investigation Monday. Dean Foods is one of the nation’s leading dairy companies, best known for its Meadow Gold and Land-o-Lakes products.

Both Walters, once the subject of a flattering “60 Minutes” segment, and Davis were charged with conspiracy, securities fraud and wire fraud. Davis also was charged with perjury and obstruction of justice. In all, Walters faces 10 counts that could draw significant prison time if he is convicted.

Walters, a major campaign donor in Nevada, has tangled over the years with law enforcement and mostly has won. He and others were acquitted in 1992 of federal gambling charges tied to the infamous Computer Group, then a high-tech collection of sports bettors, handicappers and investors adept at high-stakes wagering.

The Nevada attorney general’s office later charged Walters with money laundering, but he emerged from that case with no conviction following a long and contentious legal battle.

Known for making seven-figure bets on top sporting events, Walters is generally regarded as one of the most successful gamblers in the country. He has several multimillion-dollar homes and has traveled the world on a $20 million private jet.

Through his holding company, The Walters Group, he has developed several golf courses in Southern Nevada, some with favorable deals from local governments. And he has maintained his high community profile through his philanthropic work, primarily with his favorite charity, Opportunity Village.

The 40-page New York indictment alleges that between 2008 and 2014 Walters “regularly received confidential information” about the financial performance of the publicly traded Dean Foods from Davis, his longtime friend and business partner.

They shared mutual interests in sports, golf and gambling, and Walters extended $1 million in loans during that period to Davis that were mostly not repaid, according to the indictment.

Davis provided “material, nonpublic information” to Walters, who used that information to buy and sell securities, the indictment alleges.

“On certain trading days, Walters’ purchases or sales based on inside information amounted to more than 30 percent of the total daily trading volume in Dean Foods stock,” the indictment states.

Walters earned roughly $32 million in profits and avoided some $11 million in losses through trading Dean Foods stock, according to the indictment.

To hide the scheme from authorities, Walters gave Davis a prepaid cellphone to use when disclosing inside information to Walters, the indictment alleges. He instructed Davis to use code words, such as “Dallas Cowboys” for Dean Foods.

Diego Rodriguez, FBI assistant director in charge of the New York field office, said in a statement that insider trading for personal gain causes “untold devastation” in the stock and commodities markets.

“This kind of criminal behavior keeps wealth concentrated among the powerful, prevents everyday investors from turning a profit and undermines public confidence in the integrity of the marketplace,” Rodriguez said.

At a news conference in Manhattan on Thursday morning, U.S. Attorney Preet Bharara told reporters, “It was all good news for Walters because he had information before everyone else.”

Walters sold his 5.3 million shares of Dean Foods stock for $110 million by the end of August 2013, Bharara said.

The Las Vegas icon also provided inside stock tips on Dean Foods to Mickelson, who turned a $900,000-plus profit, Bharara said.

Mickelson, who has won three Masters golf titles, was not criminally charged, but was named as a relief defendant in a lawsuit by the U.S. Securities and Exchange Commission, which said he also traded in Dean Foods stock.

A relief defendant is not accused of wrongdoing but has received ill-gotten gains as a result of others’ illegal acts.

“Phil has not been charged with insider trading,” his lawyers, Gregory Craig and Pat Swan, said in a statement. “Phil was an innocent bystander to alleged wrongdoing by others that he was unaware of. Phil is innocent of any wrongdoing.”

“Bill Walters is a true American success story, whose extraordinary accomplishments as a lawful sports gambler have been widely recognized and lauded,” Berke said in a statement. “Mr. Walters and his counsel look forward to his day in court, where it will be shown that the prosecutors’ accusations are based on erroneous assumptions, speculative theories and false finger-pointing.”

Thomas Melsheimer, Davis’ lawyer, said his client was “pleased to be cooperating with the government in its investigation.”

Led by the FBI and SEC, the investigation became public in 2014.