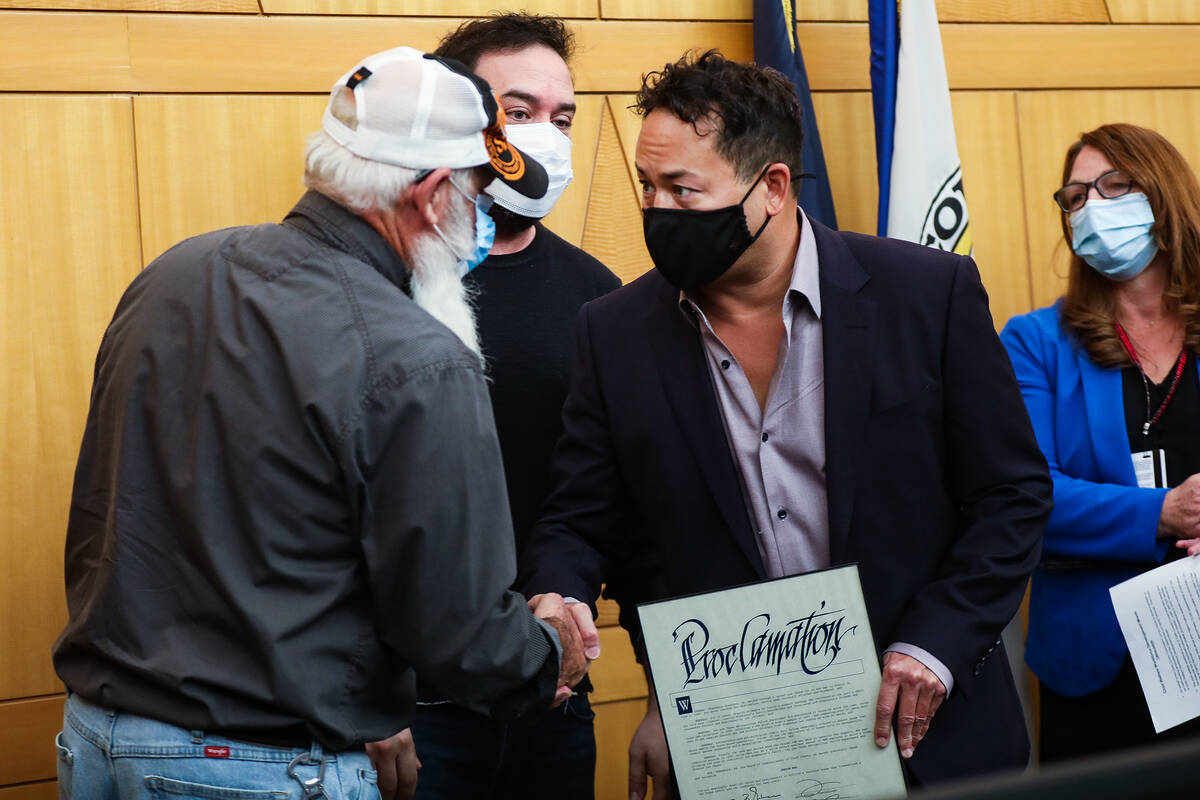 John Isaacson, left, shakes hands with philanthropist Justin Woo, right, as Othram CEO David Mittelman, center, looks on after the Clark County Commission recognized Woo for his donation that helped solve the cold case of Isaacson’s daughter, Stephanie, who was killed in 1989 in Las Vegas, on Tuesday, Sept. 21, 2021, at the Clark County Commission Chambers in Las Vegas. Othram is the company that processed the DNA sample that made it possible to identify the killer. (Rachel Aston/Las Vegas Review-Journal) @rookie__rae 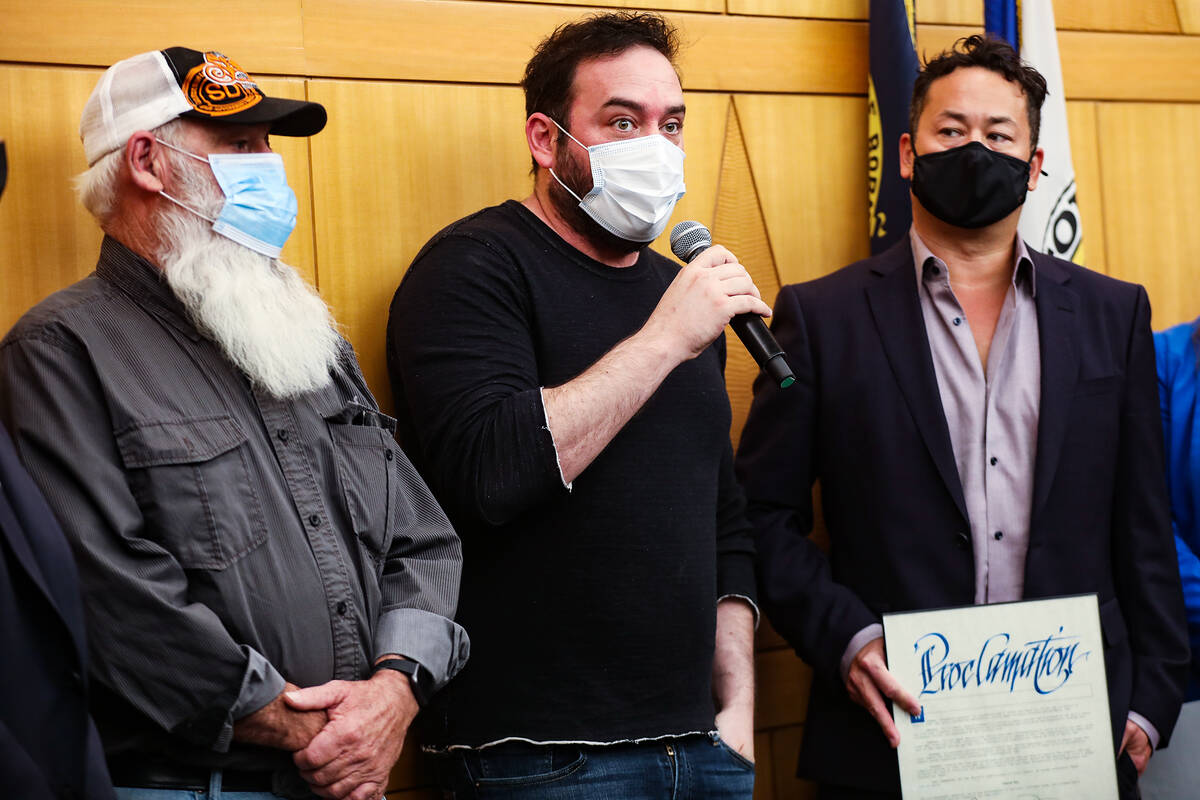 Othram CEO David Mittelman, center, speaks as John Isaacson, left, and Justin Woo, right, look on after the Clark County Commission recognized Woo for his donation that helped solve the cold case of Isaacson’s daughter, Stephanie, who was killed in 1989 in Las Vegas, on Tuesday, Sept. 21, 2021 at the Clark County Commission Chambers in Las Vegas. Othram is the company that processed the DNA sample that made it possible to identify the killer. (Rachel Aston/Las Vegas Review-Journal) @rookie__rae

One already is in the works, said Justin Woo, a local entrepreneur and philanthropist.

“We’re coming up with creative ways to advertise and crowdsource to test a whole block of cases,” he said Tuesday at the Clark County Commission meeting.

At the meeting, Commissioner Michael Naft recognized Woo, the CEO of the Texas lab Othram and Stephanie’s parents.

“I’m proud to be standing next to Mr. Isaacson, Stephanie’s father, who has obviously paid a terrible price,” Naft said. “We’re just glad to at least provide a little closure with this incredible scientific discovery.”

Stephanie Isaacson was 14 when she was sexually assaulted and strangled on her way to Eldorado High School. The case only heated up again last year when Woo made a $5,000 donation to Othram.

Looking to help the community, Woo asked the lab specifically to process a cold case from the Metropolitan Police Department.

On July 21, the department announced a match, setting a world record for the least amount of DNA used to solve a case. But there wouldn’t be an arrest: The identified killer died by suicide in 1995.

It was closure, but it wasn’t justice, Stephanie’s family said.

“I’m here to recognize and say thank you to those who helped solve the case,” Stephanie’s father, John, said outside the meeting. “It’s amazing that they did.”

Her mother, Sharon Gares, added: “All these years, and I never thought it would be solved.”

David Mittelman, the lab’s CEO, emphasized that the technology used to solve the Isaacson case is the future, and his lab has a goal of putting a dent in crime. Most of the time, cases remain unsolved because there isn’t enough money in the budget to do genealogy testing, he said.

Through their website, DNAsolves.com, they chronicle cold cases and raise funds to test the DNA.

Prior to Stephanie’s case, the lowest template of DNA ever used at Othram was to identify the body of Rodney Johnson last year. Johnson had disappeared in Seattle sometime in the late 1980s. He became known as “Lake Stickney John Doe” after his body surfaced in a lake south of Everett in mid-1994.

In that case, the lab worked with about 20 cells, with 98 percent being bacteria.

But Stephanie’s case was more challenging, Mittelman said. In her case, there were only 15 cells. Neither case would have been solved without private donations, he said.

“You have to have someone as great as Justin paired with some great detectives and investigators,” Mittelman said. “And when you sprinkle in a little bit of technology, there’s real magic that can happen.”