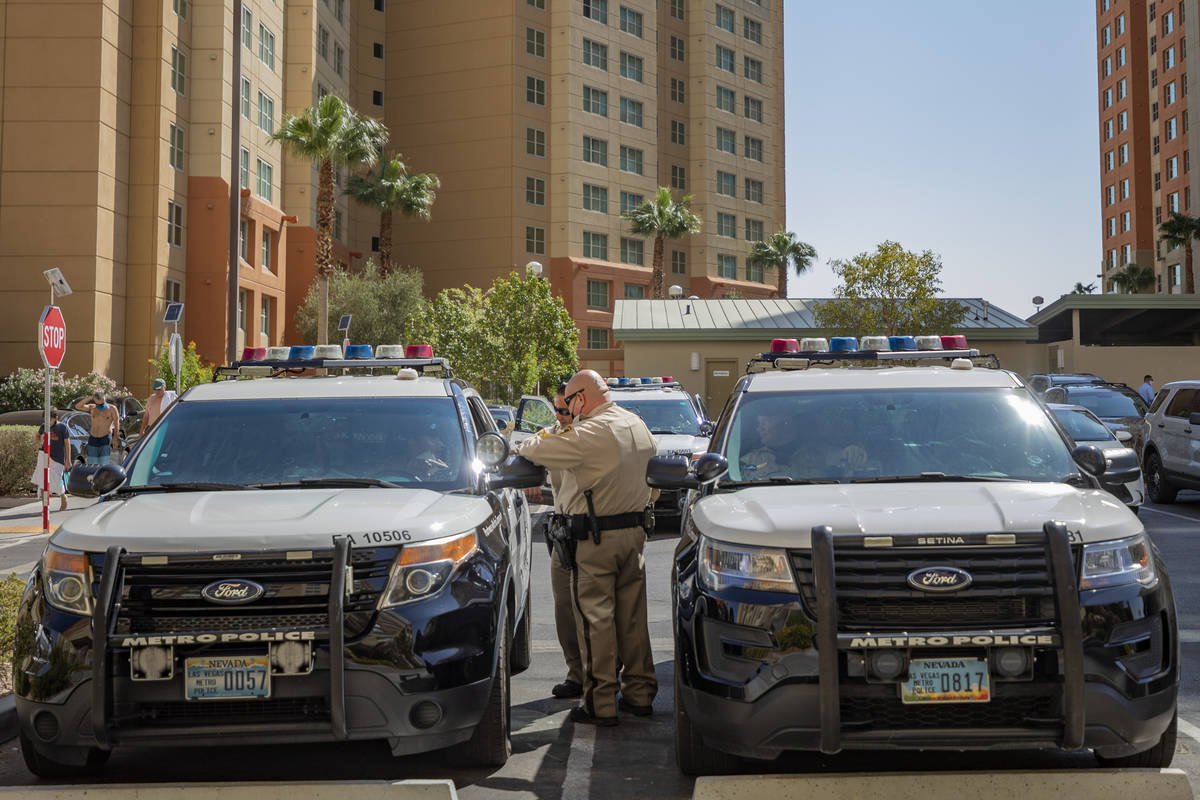 Las Vegas police have arrested two of three “documented gang members” charged with murder in the fatal stabbing of a 36-year-old man at a south valley timeshare resort in early October, according to an arrest warrant.

A third suspect was identified in the arrest warrant as Troy “Treezy” Smith, although court records list his name as Truy Smith. Court and jail records indicate he’s still at large.

All three men are “documented gang members” associated with the “West Coast Bloods,” the warrant said.

About 11:30 a.m. Oct. 4, police were called to the timeshare resort after receiving a report of a stabbing, and officers arrived to find Turner suffering from multiple stab wounds, the Metropolitan Police Department has said.

He died at the scene from stab wounds of the chest, and his death was ruled a homicide, the Clark County coroner’s office said.

Turner’s girlfriend told police that the two had arrived at a birthday party in the building because the woman’s phone had been stolen by Smith’s son, and she wanted money for the phone, the warrant said.

The woman said Turner did not want her going alone to meet Smith, who is the father of her sister’s child, the warrant said. Smith had invited Turner’s girlfriend to the timeshare, but when the couple arrived the man “appeared high and did not recall just speaking” to her, the warrant said.

The woman attempted to help her boyfriend, but Smith chased her down the hallway while holding a 10-inch long sharpened “pole” and threatened her, the warrant said. The men then ran from the building and the woman called 911.

It was unclear if police had identified the other four men the woman said attacked Turner, and there are no other co-defendants listed in the murder case, court records show.

The three co-defendants all have an arrest history in Clark County, and all have pleaded guilty to felony weapons charges, court records show.

The man have all been charged with murder and conspiracy to commit murder in connection with Turner’s death, according to court records.

Foster, who Turner’s girlfriend said didn’t have a weapon during the attack, was released from custody after he posted a surety bond on a $25,000 bail. Albritton remained in the detention center on Wednesday without bail.

Albritton is due to appear in court on Thursday morning, while a preliminary hearing in the case is scheduled for Dec. .14, court records show.

Las Vegas police officials and relatives of homicide victim Alfonso Turner are scheduled to meet with members of the news media Monday to discuss the unsolved killing.