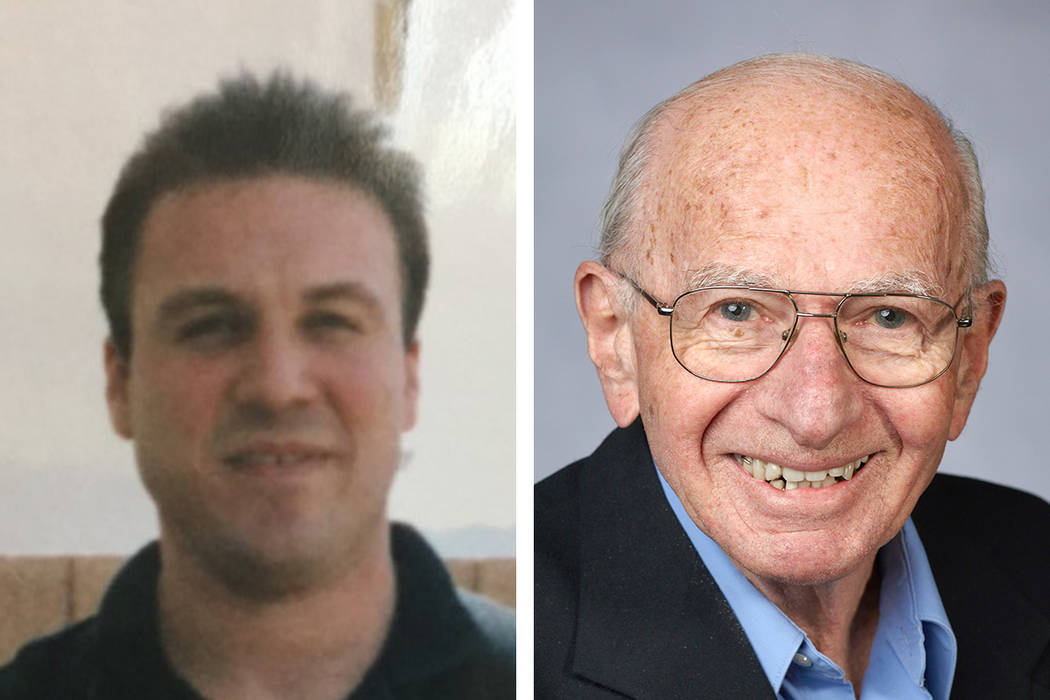 Rita Colon — who is awaiting extradition in Peru after being accused of fatally stabbing a UNLV professor in 2016 — was charged Tuesday with murder in her husband’s 2005 death.

The 44-year-old’s arrest warrant, which was released to the Review-Journal on Wednesday, detailed evidence North Las Vegas police had at the time of Edwin Colon’s death that pointed to a homicide. His cause of death originally was ruled a suicide from a stab wound to the neck by the Clark County coroner’s office.

The murder charge has been 14 years in the making, according to Rita Colon’s former brother-in-law.

“I couldn’t help him when he was alive because I didn’t know what was going on,” Luis Colon said Tuesday. “But I can try as hell to do something in his death.”

Edwin Colon was married for less than a year when the 37-year-old was pronounced dead early Feb. 3, 2005, in the couple’s North Las Vegas home. The night of her husband’s death, Rita Colon told police they had a fight because he wanted to tell his friend “about their problems.”

She claimed she cut her hand while trying to get a knife away from Edwin Colon, but later told detectives he “came at (her) with the knife,” a detective wrote in 2005. She found her husband in the kitchen “holding the knife to his neck,” and witnessed him stab himself in the neck, she told police.

“Rita did not remember if she pulled the knife from the neck or not,” a detective wrote in 2005.

Police found Edwin Colon dead in the home, lying in a pool of blood. A kitchen knife with blood on it was on the countertop, the report said.

Edwin Colon was wearing wearing a “heavy coat,” as if he was about to leave, “not standing around contemplating suicide,” a detective wrote in a report filed Tuesday.

Investigators in 2005 noted “signs of a struggle” in the kitchen, which had broken glass and plastic grapes on the floor. Police also found a “bloody handprint” on the ground next to Edwin Colon, blood spatter on the wall and blood smudges around the kitchen, the report said.

A detective in 2019 wrote the blood spatter “most likely” came from “Rita pulling the bloody knife out of Edwin’s neck by force.”

An autopsy report from Feb. 3, 2005, noted Edwin Colon’s wound was at least 4.5 inches deep and affected more than just his neck. He was stabbed once near his collarbone, and the knife pierced the top of his right lung.

He had cuts on his face, neck, left shoulder and right hand. A detective in 2019 found photographs showing fingernail scratches on the left of his shoulder and neck, the report said.

“Photos show the knife wound path was from a significant up to down angle,” the detective wrote in 2019, adding it was “much more indicative of (being) stabbed by an assailant than a self inflicted wound.”

In 2016, an ex-boyfriend told Henderson detectives he thought Rita Colon killed her husband, but it was unclear if North Las Vegas police were told about his claims.

Henderson police talked to the man while investigating the death of 77-year-old Leroy Pelton, a former UNLV professor whose body was found in his home in December 2016. He died from multiple stab wounds to the neck, according to Rita Colon’s arrest warrant in that case.

Henderson investigators believed Rita Colon was a former student and girlfriend of Pelton and attempted to access his $1.1 million retirement fund after his death.

In 2016, the ex-boyfriend told Henderson police he dated Rita Colon briefly in 2008, but they broke up “following a domestic violence incident.” The man, whose name is redacted in the North Las Vegas report, claimed she punched him and rammed his car with hers after they broke up.

“When asked to describe Rita, (the man) stated she was a sociopath,” a Henderson detective wrote in 2016, adding that “he also stated he felt confident that she had killed her husband.”

The man filed a stalking order against her after they broke up, and claimed he wrote in that statement he believed Rita Colon killed Edwin Colon.

North Las Vegas police spoke with Edwin Colon’s mother on Tuesday, when she told them about a phone conversation she had with her son the night he died. During that conversation, Rita Colon took the phone and told her husband’s mother she had “smacked” him, the report said.

The woman’s name and relationship to Edwin Colon was redacted from the report, but Luis Colon confirmed his mother told detectives about the phone call.

“Someone grossly missed something”

Two North Las Vegas detectives began gathering the evidence detailed in the warrant in July when they were assigned to Edwin Colon’s case.

That only happened after a medical examiner on May 15 reviewed the case and changed Edwin Colon’s manner of death to “undetermined.” The coroner’s office review came after Luis Colon brought his brother’s death up with the office, and after the Review-Journal published details about Pelton’s death.

North Las Vegas police spokesman Eric Leavitt told the Review-Journal in May that if murder charges were brought against Rita Colon in her husband’s death, then “that means someone grossly missed something” in 2005.

Rita Colon has yet to return to Nevada from Peru, where she was apprehended in December 2017 after being charged with murder in Pelton’s death. As a condition of her extradition, prosecutors agreed not to seek the death penalty in the case, Clark County District Attorney Steve Wolfson said in August.

“We’ve done everything we can,” Wolfson said. “We are hoping that the Department of Justice convinces the Peruvian authorities to produce this defendant so we can continue with our investigation.”

Wolfson did not immediately respond to follow-up questions sent Tuesday.

On Tuesday, Luis Colon said he isn’t sure his brother will see justice, because Rita Colon cremated his body.

“I’m hopefully that something will happen, but at the same time, here’s a person who made it a point to destroy the evidence,” he said.

Luis Colon said he was told the case will now be presented to a grand jury. He said there’s a “time crunch” for the Department of Justice to add the new charge to Rita Colon’s extradition agreement so she can go to trial for both cases.

After nearly six months of phone calls and emails, Luis Colon is one step closer to seeing Rita Colon face a jury.

“I guess I never thought that it could get to this point, because I didn’t know. I didn’t know what to expect,” he said.