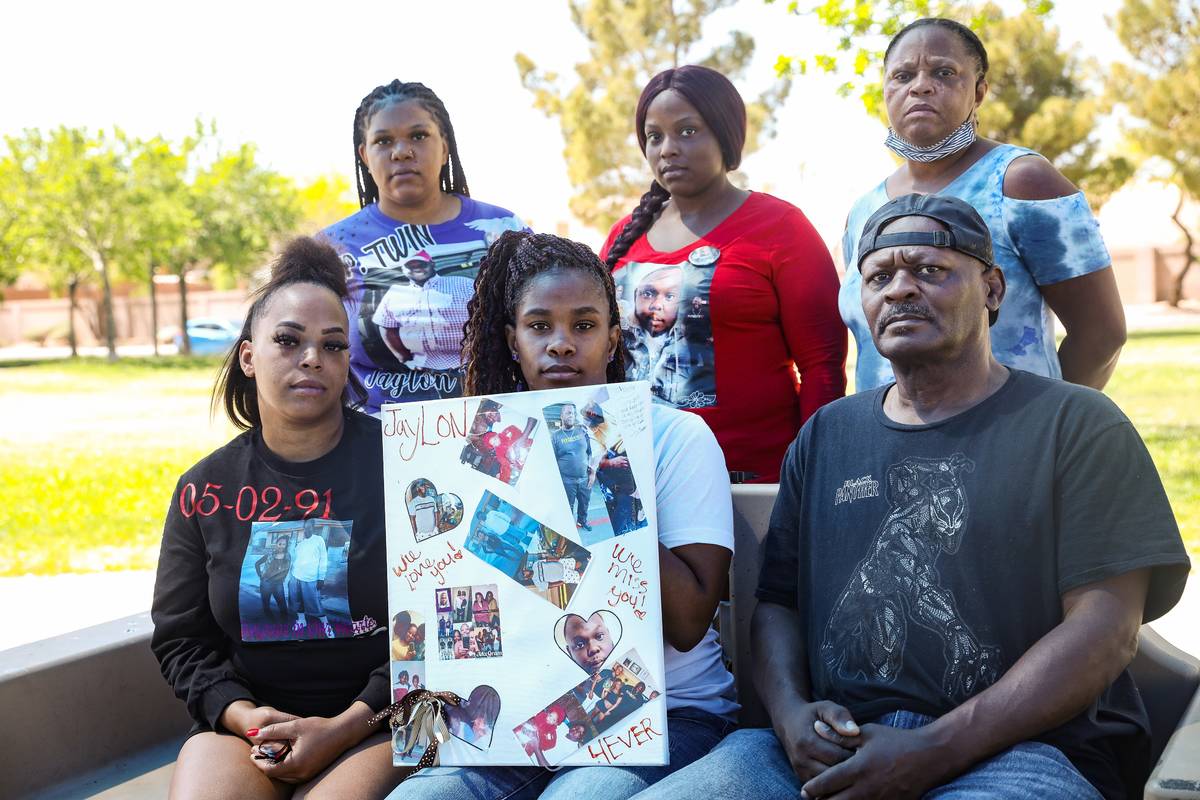 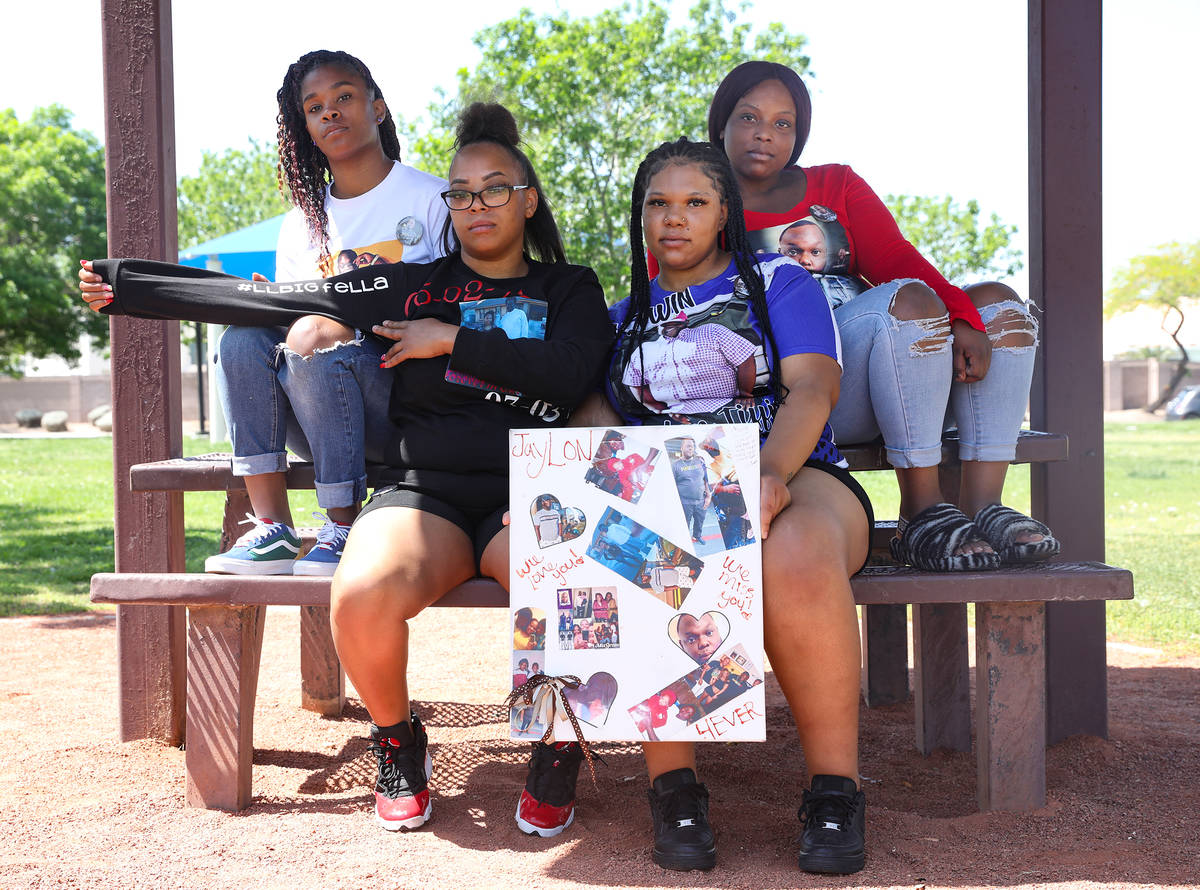 The family of Jaylon Tiffith, who was killed after he dropped off his daughter at the mother's apartment allegedly by her boyfriend, from left: sister Monika Carter, niece Wynesha Lewis, sister Taylor Tiffith, and sister Eliza Tiffith hold a poster and wear shirts of Jaylon at Cheyenne Ridge Park in Las Vegas, Tuesday, April 13, 2021. (Rachel Aston/Las Vegas Review-Journal) @rookie__rae 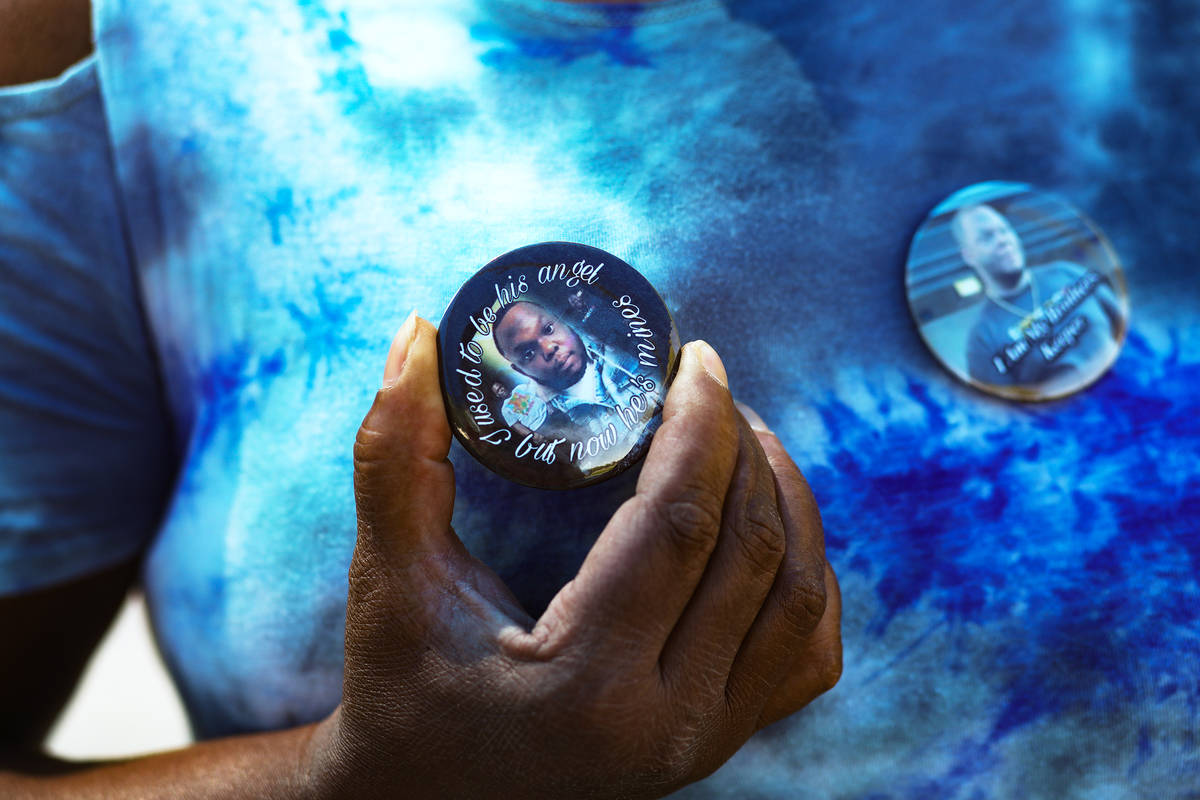 Sandra Tiffith, sister of Jaylon Tiffith, who was killed after he dropped off his daughter at the mother's apartment allegedly by her boyfriend, shows a button made in honor of him at Cheyenne Ridge Park in Las Vegas, Wednesday, April 14, 2021. (Rachel Aston/Las Vegas Review-Journal) @rookie__rae 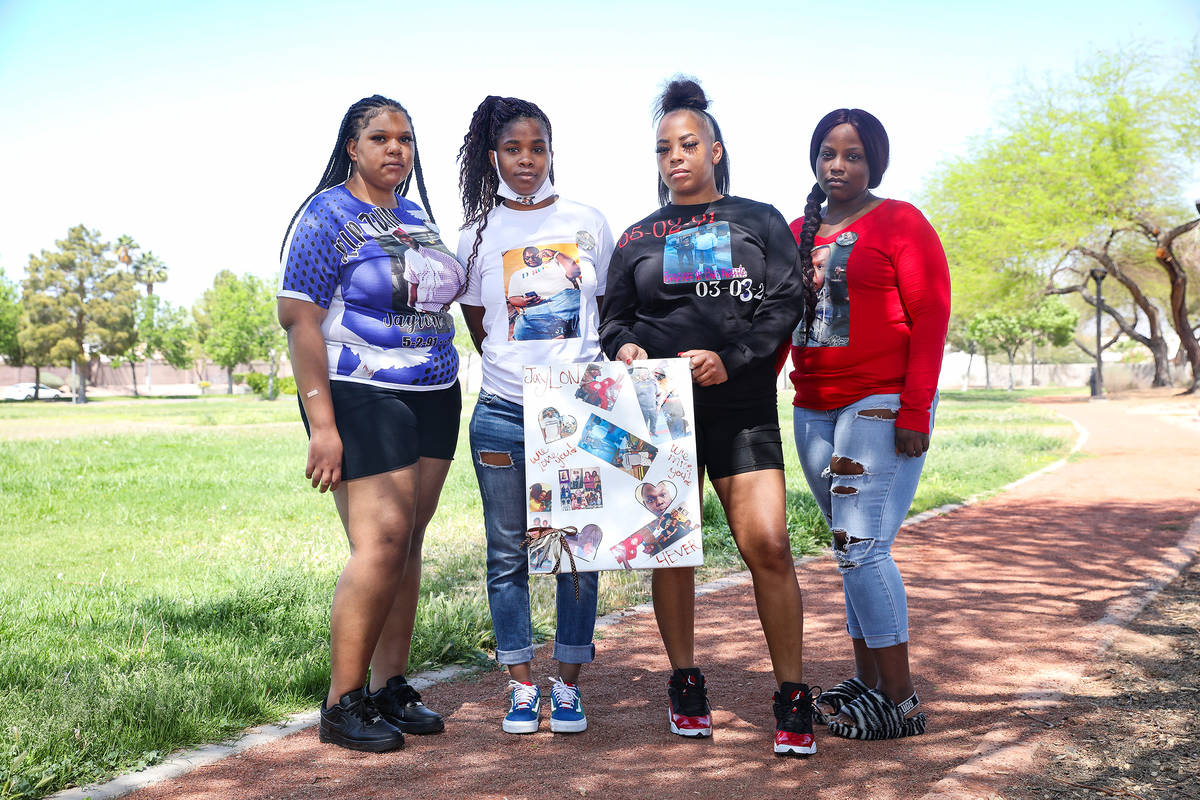 The family of Jaylon Tiffith, who was killed after he dropped off his daughter at the mother's apartment allegedly by her boyfriend, from left: sister Taylor Tiffith, sister Monika Carter, niece Wynesha Lewis, and sister Eliza Tiffith hold a poster and wear shirts of Jaylon at Cheyenne Ridge Park in Las Vegas, Tuesday, April 13, 2021. (Rachel Aston/Las Vegas Review-Journal) @rookie__rae 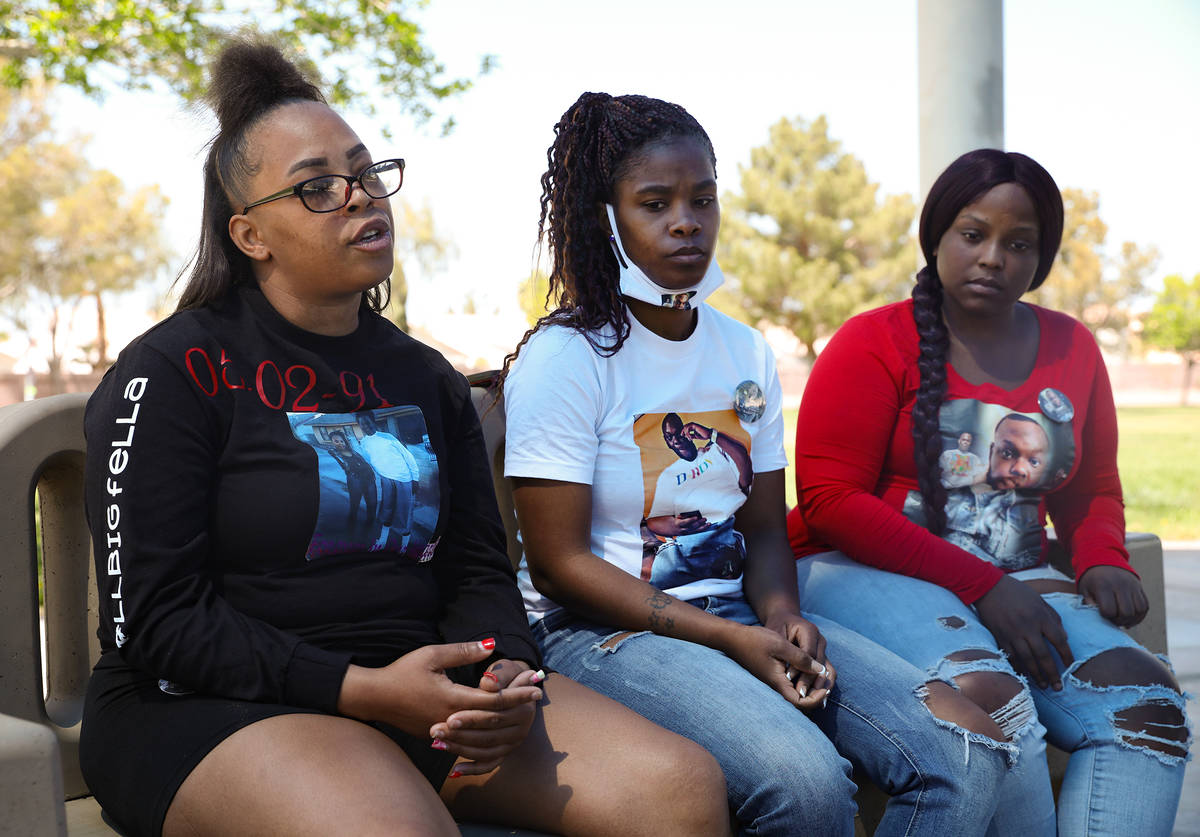 Wynesha Lewis, left, niece to Jaylon Tiffith, who was killed after he dropped off his daughter at the mother's apartment allegedly by her boyfriend, speaks to the Review-Journal alongside her cousins Monika Carter, center, and Eliza Tiffith, right, at Cheyenne Ridge Park in Las Vegas, Tuesday, April 13, 2021. (Rachel Aston/Las Vegas Review-Journal) @rookie__rae

North Las Vegas police and loved ones of Jaylon Tiffith, 29, said that at around 6:30 p.m. March 3, Tiffith dropped off his daughter, Nevaeh, with the child’s mother at an apartment on the 3900 block of North Scott Robinson Boulevard. Tiffith then drove off but returned a few minutes later after police said the girl’s mother had called to say that he had forgotten to leave Nevaeh’s phone behind.

According to a police report and Tiffith’s family, Tiffith arrived with an adult female friend. A fight between the child’s mother and the friend then broke out. When Tiffith tried to intervene, police said, Jamel Gibbs, the new boyfriend of Nevaeh’s mother, shot him in the head.

“What happened within those few minutes of them turning around to bring the phone back?” said Tiffith’s niece, Wynisha Lewis. “There’s more to the story. That’s how I feel.”

Gibbs, 29, was arrested March 31 on one count of murder, jail records show. A witness told police that they saw Gibbs with a gun at the scene.

Tiffith’s younger sister, Eliza Tiffith, and his family members said he was a loving father who regularly had custody of his daughter. The Las Vegas High School graduate worked jobs in customer service to help support Nevaeh, the family said. Jaylon Tiffith’s family also said he had custody of the child for a full month prior to the shooting.

“He was very harmless. Too harmless,” Eliza Tiffith said of her brother.

In contrast, court records show Gibbs was recently released from the Nevada Department of Corrections after serving a nearly 10-year sentence for attempted murder and battery. Gibbs was 16 when police said he attempted to kill four North Las Vegas teenagers in a 2008 gang shooting. Police reports indicate Gibbs unloaded a handgun at the teens because the North Las Vegas “Squad Up and The Wood Gang” were having a dispute on Myspace, a social networking website.

“There was a confusing melee,” Mueller said. “It would appear that Mr. Gibbs may very well not be the shooter. We are continuing to investigate.”

Gibbs is being held at the Clark County Detention Center in connection with Tiffith’s killing. North Las Vegas police continue to investigate.

Prior to the shooting, Tiffith’s family also said that Gibbs had threatened Tiffith over text.

“Two months before he was killed, that is when he was getting the threats,” Lewis said. “There was a message with a photo of a gun.”