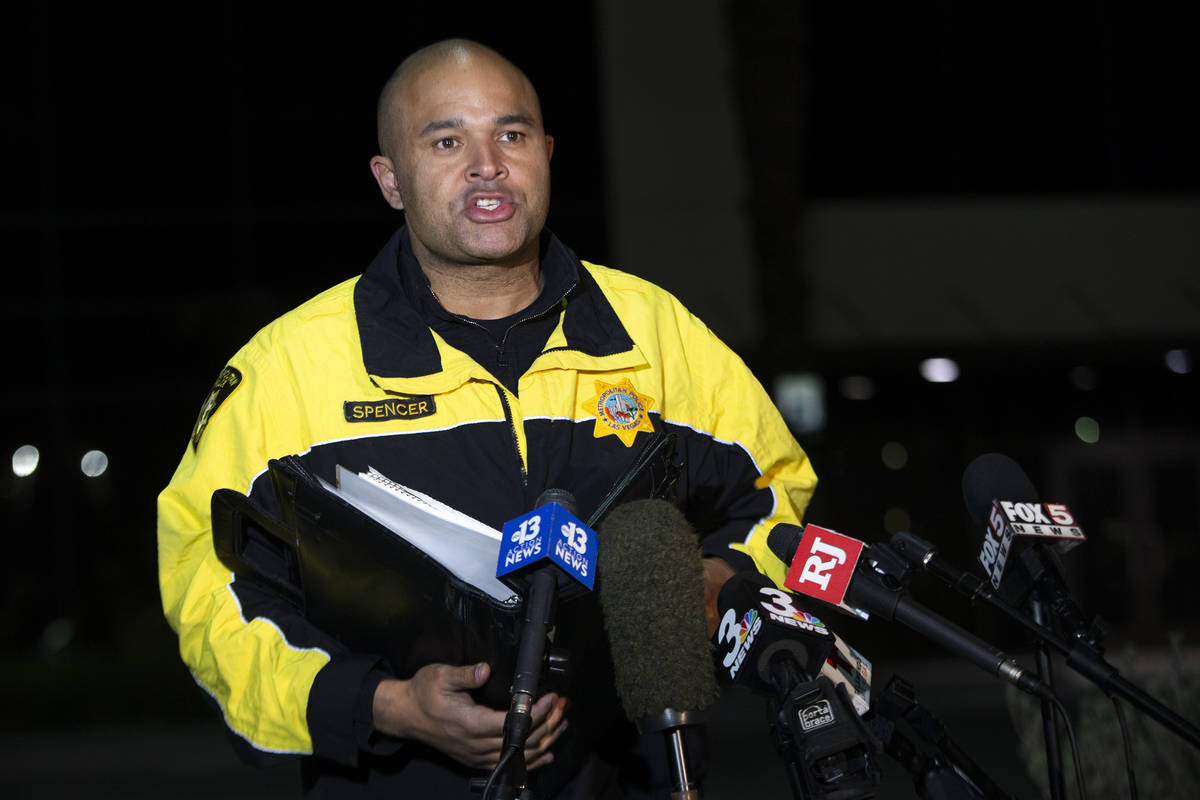 Homicide Lt. Ray Spencer gives a briefing to the press about a homicide at the Wynn Employee Parking Garage on Tuesday, March 9, 2021, in Las Vegas. (Ellen Schmidt/Las Vegas Review-Journal) @ellenschmidttt 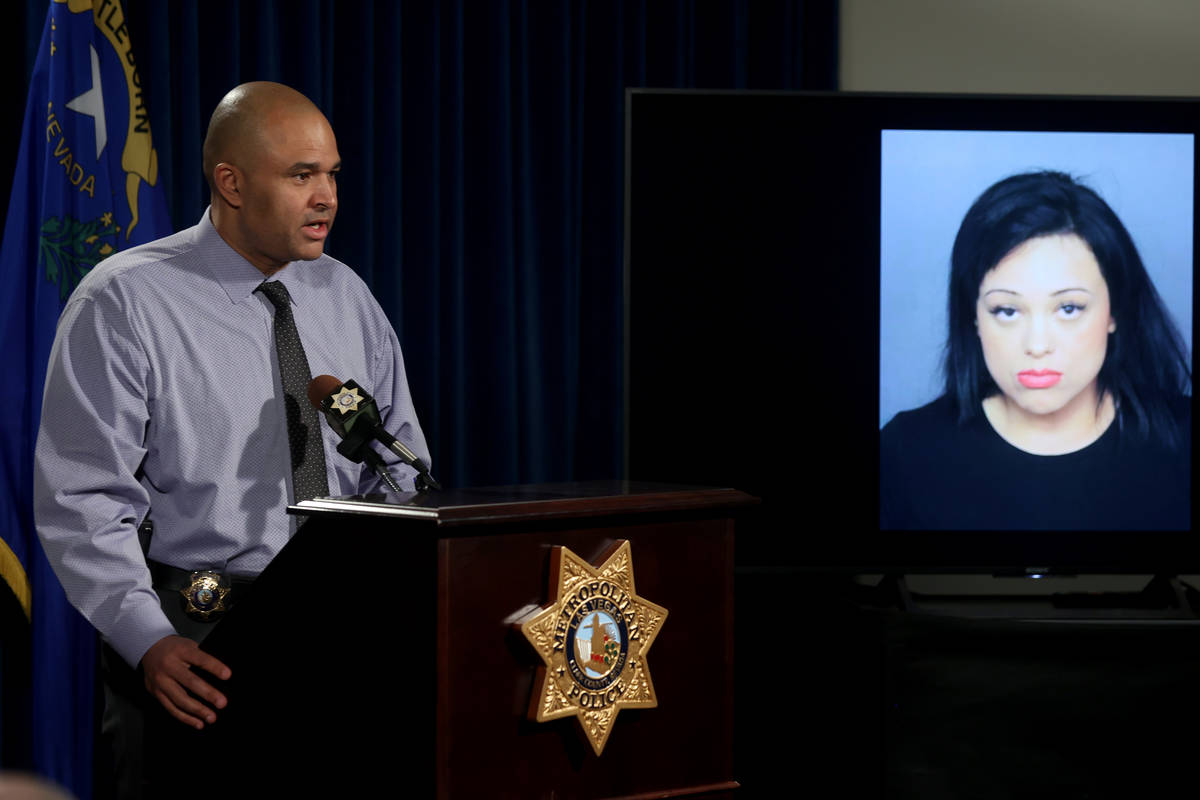 Timothy Hartley, an easygoing and hard-working restaurant employee, was at his regular bar in late June when a man randomly walked up and shot him — just one of 100 homicides investigated by police in Clark County in the first six months of 2021.

Metropolitan Police Department homicide Lt. Ray Spencer said random homicides such as Hartley’s death are typically few and far between but appear to have increased this year.

“It’s really disturbing that you could be sitting at a bar, playing a video poker machine, and someone just unprovoked walks up to you and shoots you,” Spencer told the Review-Journal.

Homicides in Clark County rose 13.6 percent during the first half of 2021 when compared to January through June of last year, according to records maintained by the Review-Journal. The rise doesn’t appear to be affected only by the effects of COVID-19 on last year’s statistics — both the six-month and the yearly number of Clark County homicides increased in 2020 compared with the year prior.

After witnessing a decrease in 2019, Metro saw a 37 percent increase in homicides throughout 2020. The numbers rose again in the first half of 2021, from 66 in January to June of last year to 75 during the same period this year, which was a 13.6 percent increase, matching Clark County’s numbers.

When tracking homicides, the Review-Journal includes fatal police shootings in its totals, while Metro does not. Also included are accidental shootings that are ruled homicides by the coroner’s office, such as when an 18-year-old woman was accidentally shot in January.

Other cases included were deaths that happened before 2021 but weren’t ruled a homicide until this year, including an 86-year-old man whose body was found in September 2018, a 4-year-old boy who died of blunt force injuries in August 2019 and a 6-year-old girl who was accidentally shot by her younger brother in November.

North Las Vegas totals are slightly higher than last year, with 16 homicides investigated compared with last year’s 13 by this time. Of those, three were 1996 gang-related killings that Willis Davis was charged with in February.

The North Las Vegas Police Department recorded the highest number of homicides that were identifiable as gang-related killings in the first six months of 2021, according to Review-Journal records, which show that at least six homicides investigated by the department were gang-related.

There have been seven homicides investigated by the Henderson Police Department during the first six months of 2021, the same number of killings investigated during that period both last year and in 2019.

Henderson police Lt. John Plunkett said the department has not identified major trends, but Review-Journal records show that domestic violence was the most common cause of homicides investigated in Henderson this year.

Along with increased total homicides, Metro has seen a higher number of children under the age of 8 killed during the first six months of 2021, Spencer said.

There were seven homicides of young children investigated throughout last year, and only one — a boy whose death was ruled a homicide in January 2020 — was investigated in the first six months of 2020, according to Review-Journal records.

During the same period this year, the department has investigated eight homicides of a child under the age of 8, two of which were children whose deaths weren’t ruled homicides until this year.

Clark County Sheriff Joe Lombardo said that the pandemic may be playing a role in the increased number of young children being killed.

“Just with experience, 30-plus years in law enforcement, I think it’s anxiety over COVID and economic factors in those cases,” Lombardo said. “A lot of people tend to lash out when they don’t see a light at the end of the tunnel.”

Lombardo said he believes homicides are difficult to combat with prevention efforts because of the sometimes random nature of violent crime. But he pointed to the department’s homicide solvability rate of about 93 percent as proof Metro is doing its best to combat and solve killings.

“If you look at across the nation, around 60 percent is the average for solvability on homicides,” he said. “We’re up in the 90th percentile, which is huge, because people need to know that there’s consequences for their actions.”

Spencer said that while other major police departments also saw an increase in homicides last year, other jurisdictions had a decrease in the solvability rate, unlike Metro. As of Wednesday, Spencer said, Metro has investigated only two homicides this year that his unit has not solved or been able to identify a suspect.

In December, the Wall Street Journal reported that homicides had increased in 2020 for the country’s 10 largest police departments, including Metro, and the average clearance rate at nine of the departments that provided data was about 59 percent.

From January to June, there have been four random homicides in Clark County, all of which were investigated by Metro, according to Review-Journal records.

There were four random homicides in Clark County last year between Metro, North Las Vegas and Henderson police departments, but all occurred in the second half of the year. In 2019 there was one random killing, which also happened in the last six months of the year.

The random attacks this year included a 54-year-old man who was stabbed at a bus stop, a 63-year-old woman who was beaten and strangled by her neighbor and a 60-year-old man found dead in a road with blunt force injuries.

On June 27, Hartley became the victim of the fourth random killing this year when he was shot inside a PT’s Place at 1281 S. Decatur Blvd. Police arrested 24-year-old Anthony Balderas in connection with the killing after Balderas left his debit card at the bar, according to his arrest report.

Balderas told police he had been drinking into the early hours of July 27 and did not remember shooting Hartley.

Homicides have continued to climb in recent days, with 12 more killings investigated in Clark County since June 30, seven of which were investigated by Metro. John Anthony Carrill0, 29, has been linked to three “unprovoked” killings that took place over a three-day crime spree in the first week of July, Spencer said.

Like other random killings this year, intoxication played a role in the three fatal shootings Carrillo is suspected of, although at least one of the homicides was a robbery, Spencer said.

“If someone’s not under the influence, does the homicide happen?” he said.