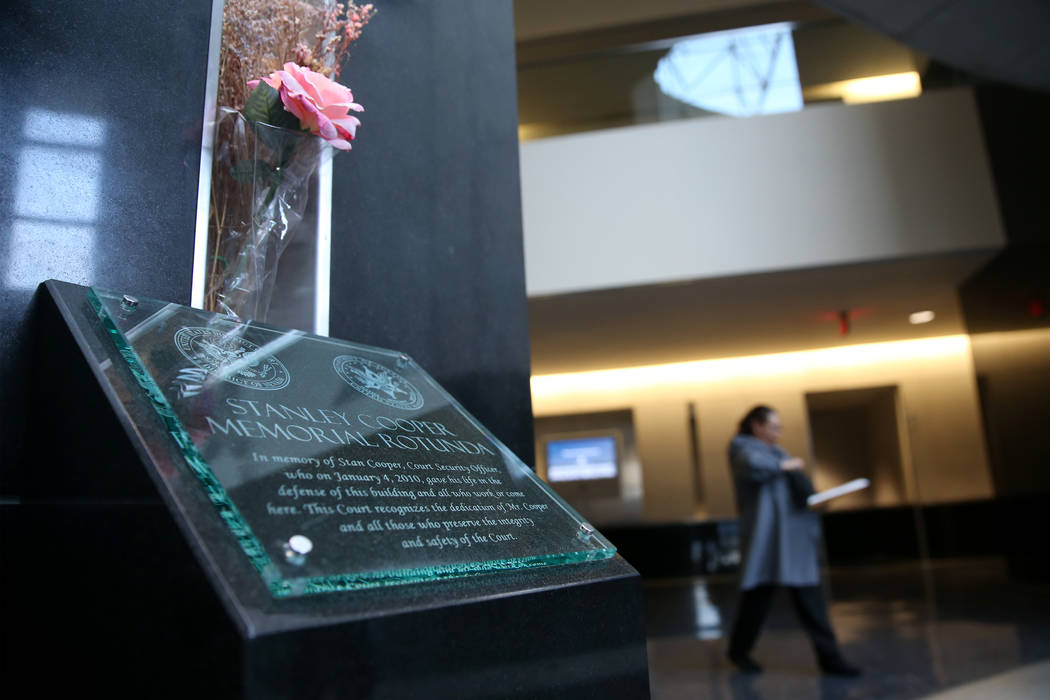 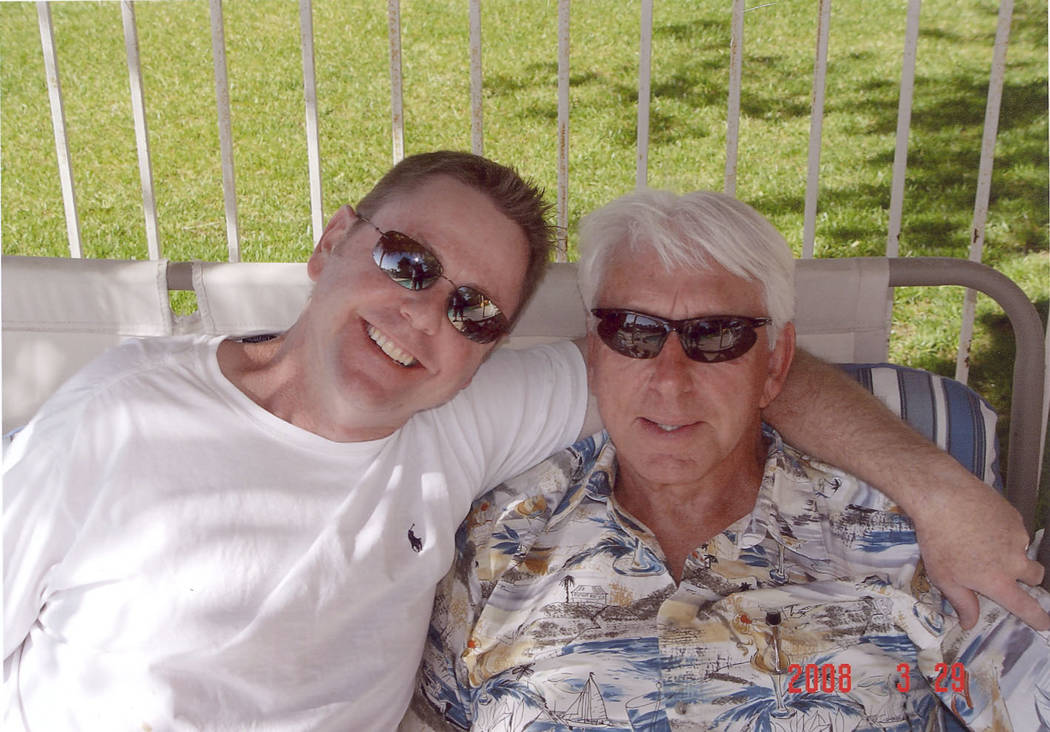 Stan Cooper, right, a court security officer at the Lloyd George U.S. Courthouse, is shown in this undated photo. Cooper, a retired Las Vegas police officer, was shot to death during a shootout at the courthouse on Jan. 4, 2010, in Las Vegas. (Cooper family) 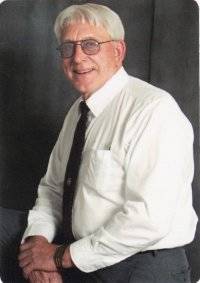 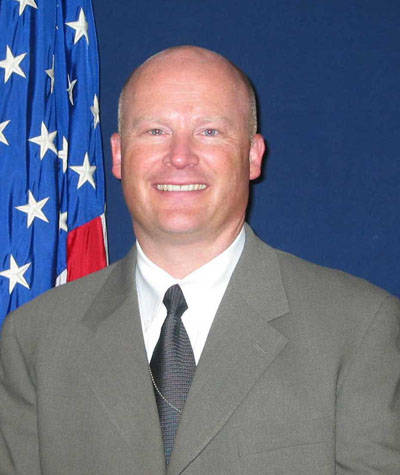 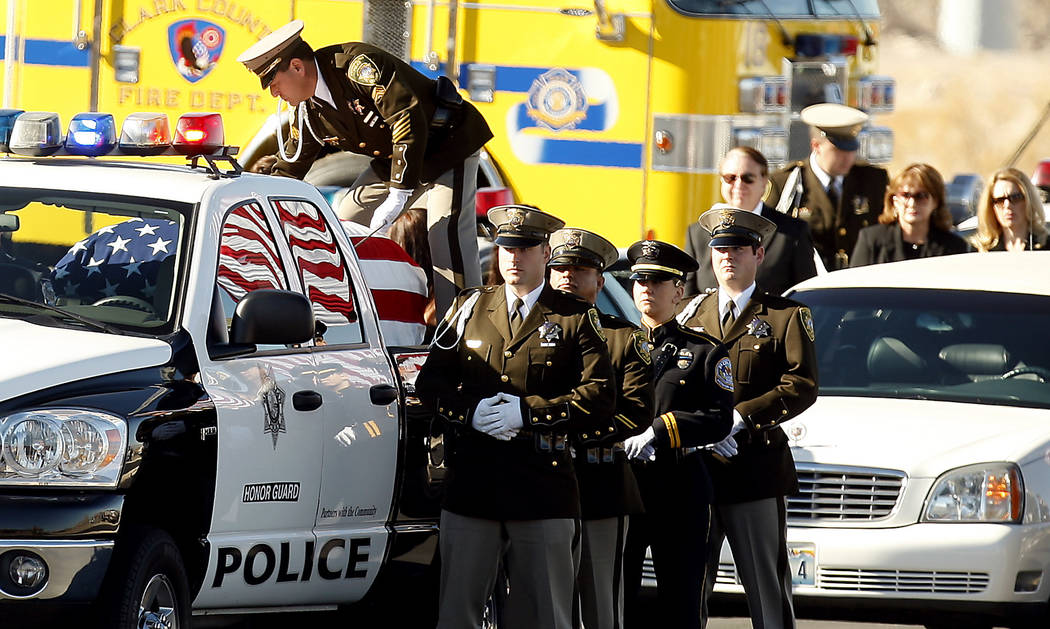 The casket of slain court security officer Stan Cooper arrives with full escort for a funeral service at Central Christian Church in Henderson on Jan. 11, 2010. Cooper was working as a security officer at the Lloyd George U.S. Courthouse when he was shot to death by 66-year-old Johnny Lee Wicks. (Review-Journal file) 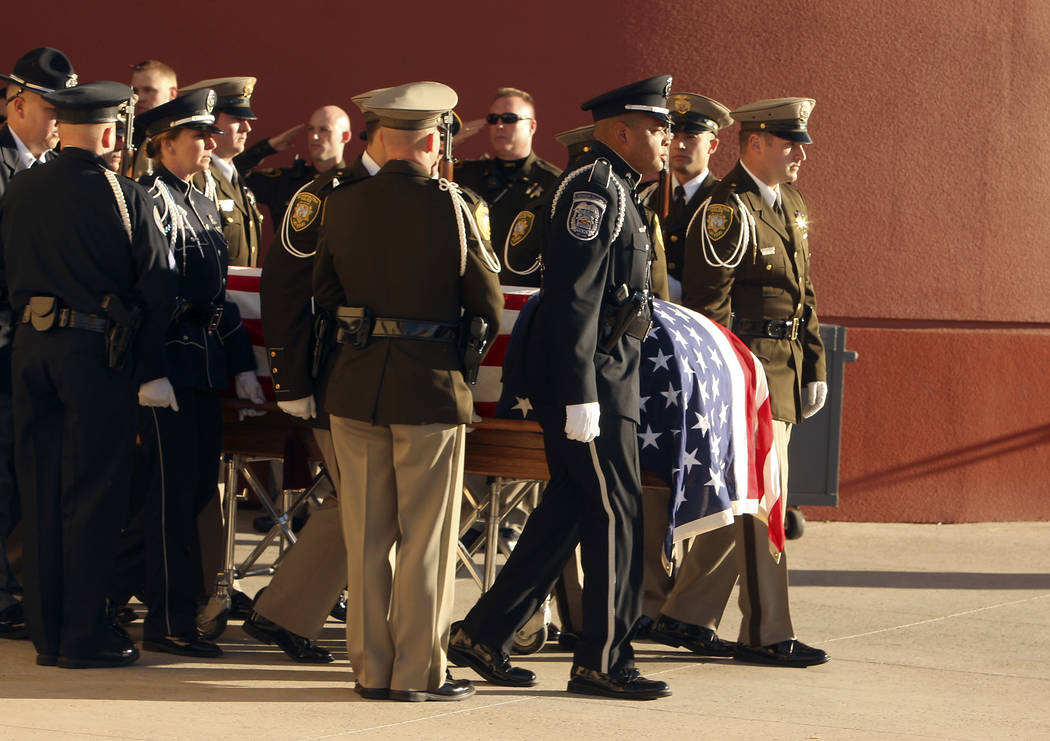 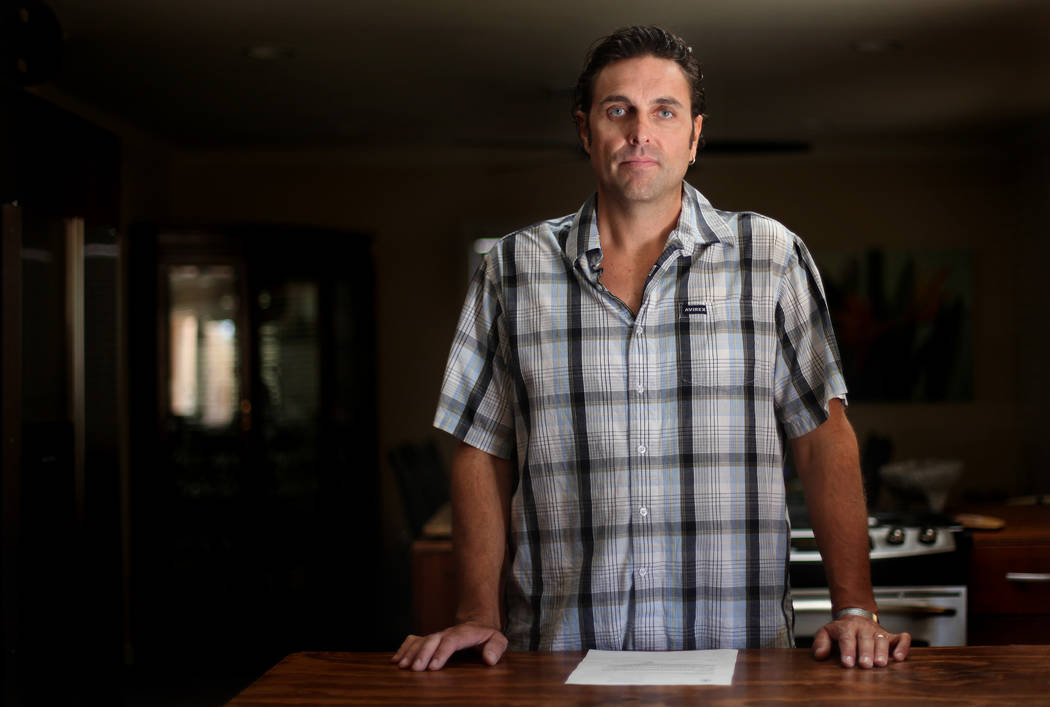 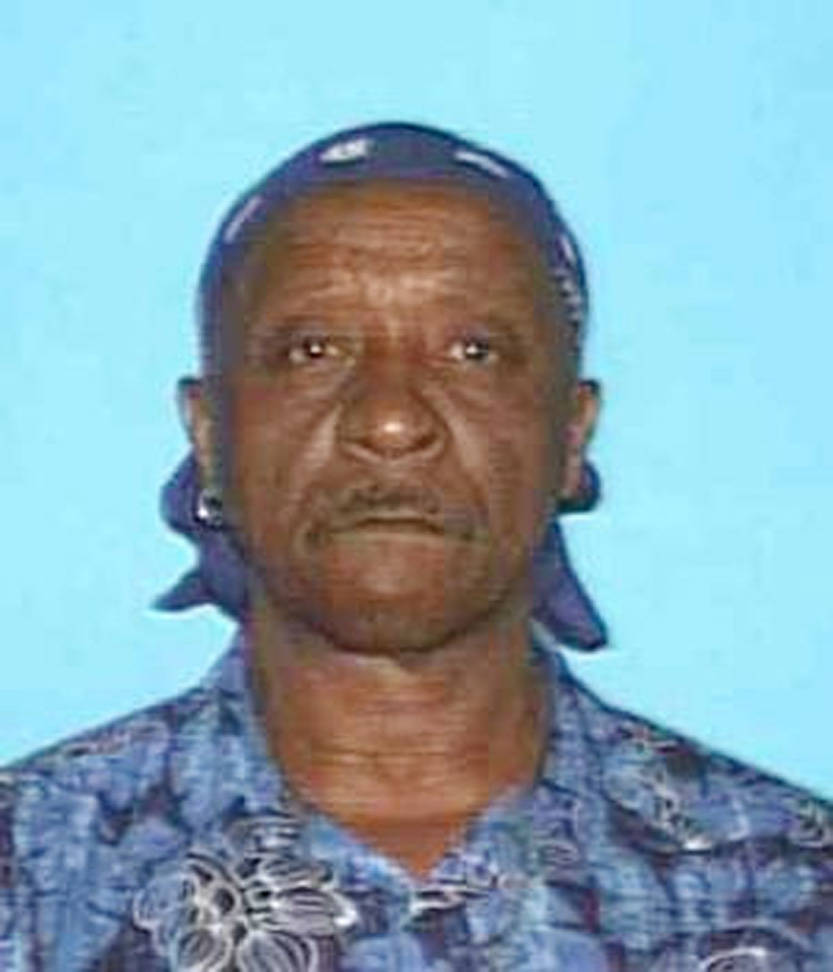 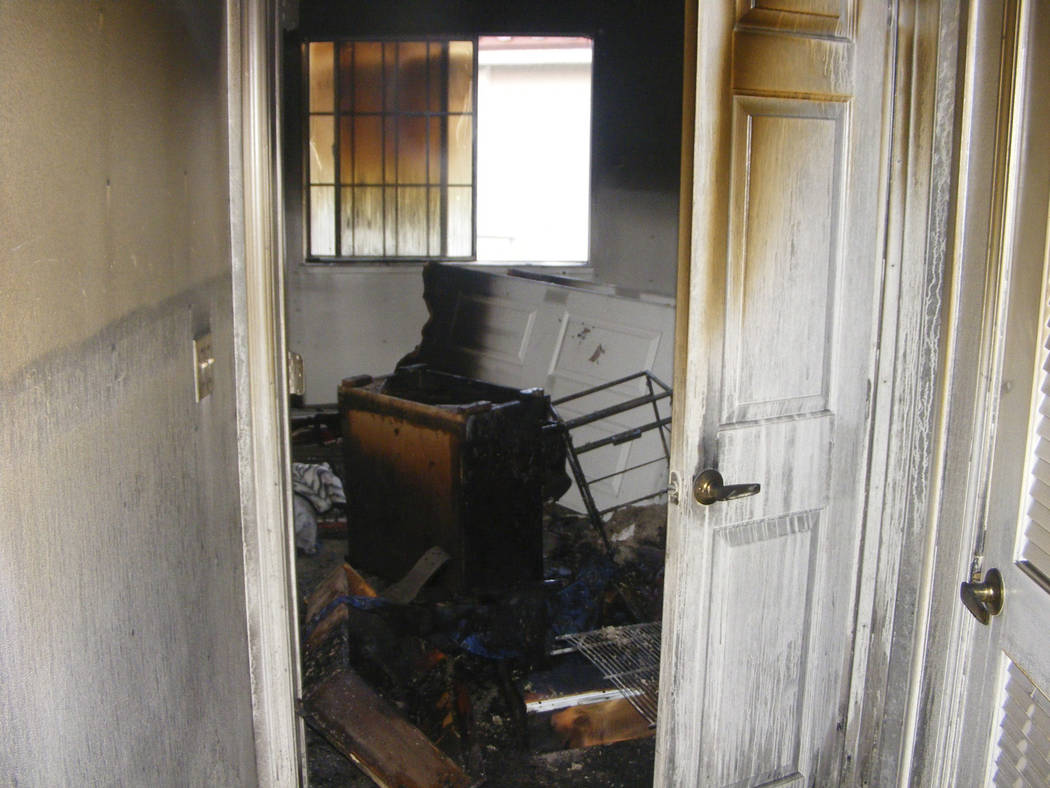 A burned-out bedroom of shootout suspect Johnny Wicks is shown in his Sunrise Village apartment at Sunrise Village. Police suspect that Wicks set his apartment on fire before he entered the Lloyd George U.S. Courthouse and opened fire. (Review-Journal file) 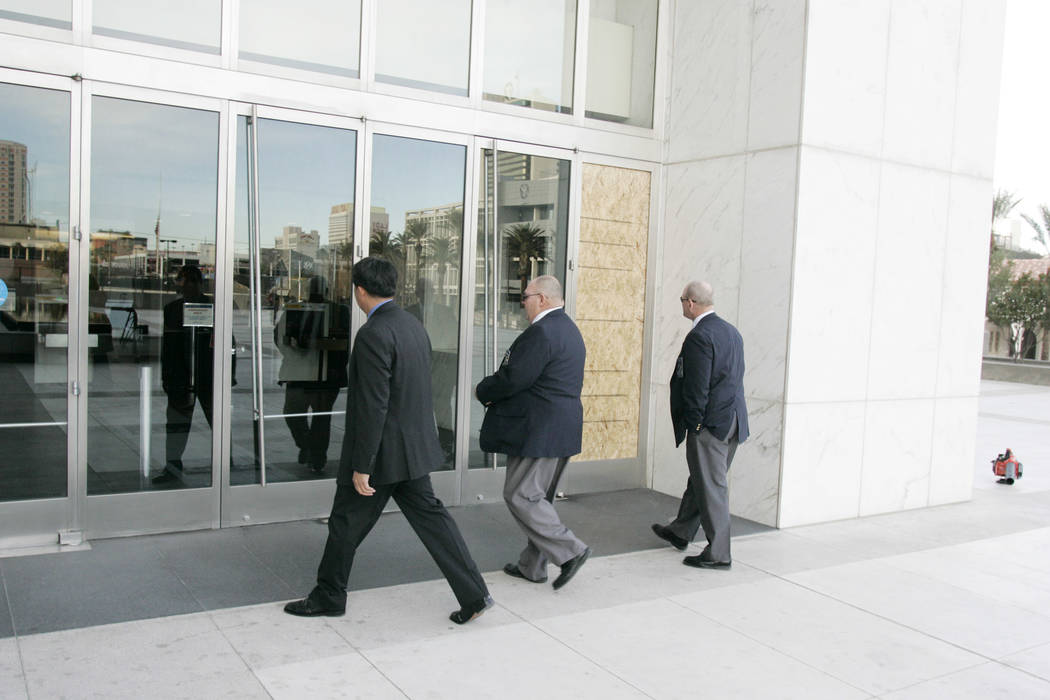 Three men approach the Lloyd George U.S. Courthouse past a wood panel replacing a window that was shot out during a gun battle between Las Vegas area law enforcement and a gunman at the courthouse the day before. (Review-Journal file) 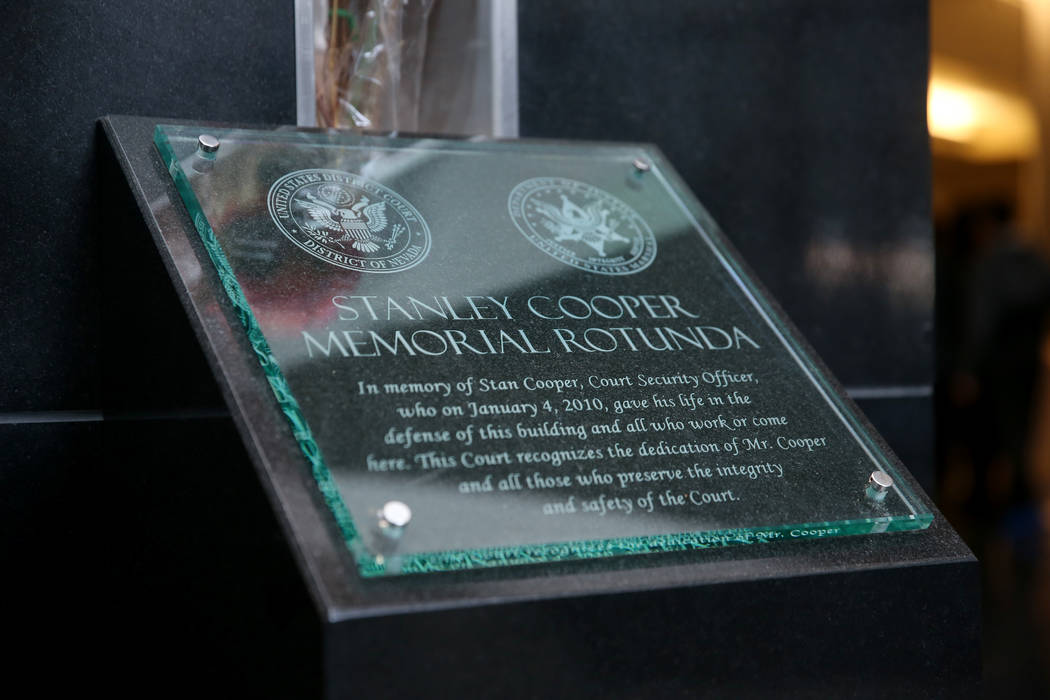 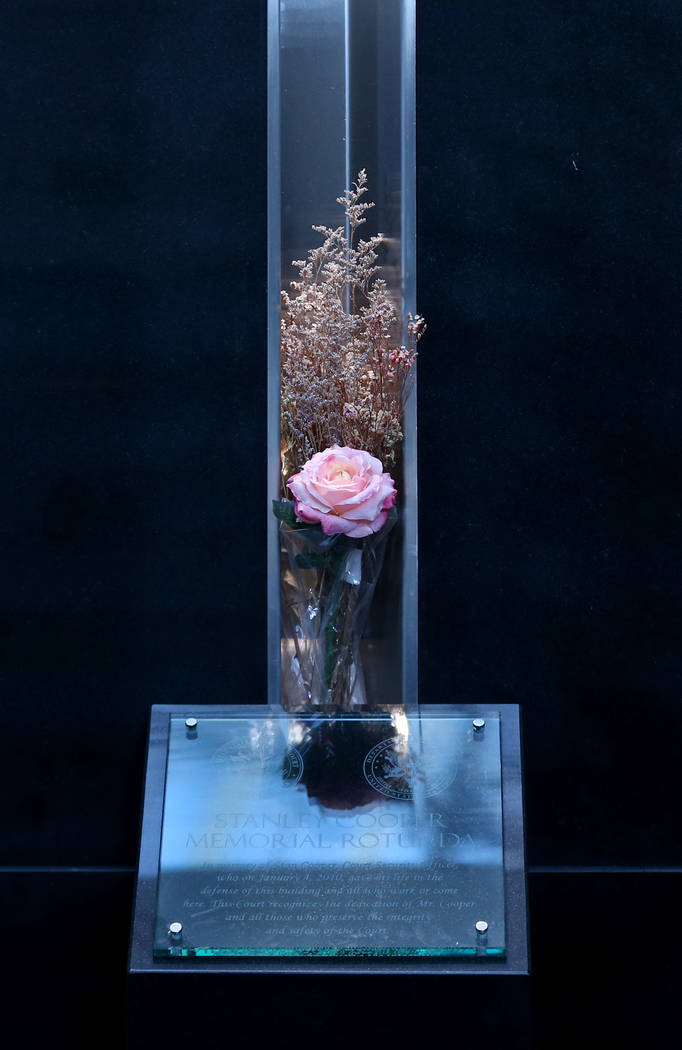 On the first Monday of 2010, downtown Las Vegas echoed with the crack of gunshots.

The sounds stemmed from the steps of the federal courthouse, reverberating between the city’s high-rise buildings shortly after 8 a.m. A court security officer was killed, a deputy U.S. marshal was injured, and after more than 80 rounds were fired, the 66-year-old gunman was dead.

The Jan. 4, 2010, attack unfolded on an otherwise normal morning. People put down their belongings and waited for court security to screen them. Then a man in a trench coat stepped inside the building and, without saying a word, pulled a shotgun from beneath his jacket, lifted the barrel and fired.

Inside the lobby, with its lofty glass ceiling, it sounded like cannon fire.

“Right away, I heard the shot, and I’m thinking, is this a test?” Arthur Gennaro Jr., who was working court security at the main entrance that day, told the Las Vegas Review-Journal ahead of the attack’s 10th anniversary.

He looked to see his partner, Stan Cooper, on the ground. Boom.

The gunman had fired again. Boom.

“Your adrenaline is flowing, your partner is possibly killed — you want to end it as soon as possible,” Gennaro said. “Without saying a word, everybody just did what they had to do to stop this guy.”

At the Lloyd George U.S. Courthouse — where he worked for more than 15 years as a court security officer — Cooper also would grab a newspaper, unfolding it only to cut out the crossword puzzle before refolding it and sliding it back into the stack.

“This is what you’d get to read if Stan beat you to it,” his coworker and good friend Michael Gerrity III said at Cooper’s funeral, holding up a piece of the Las Vegas Review-Journal’s local section with a large chunk missing.

When the gunman walked in that January morning, Cooper was sitting in a chair — the perch from which he would check IDs as his partner, Gennaro, screened the X-ray machine.

When the gunman raised his weapon, silent surveillance footage later played in a public hearing on the attack showed Cooper, 72, rising out of his chair and then slumping to his right, collapsing on the floor a few feet away.

The gunman’s first round, fired through the mouth of the metal detector, had hit Cooper, a retired Las Vegas police sergeant, in the chest. He never got a chance to draw his weapon.

“We cannot know how many lives were saved because Stan Cooper gave his,” then-Sen. Harry Reid said at the loving father and grandfather’s funeral. “We can know deep indescribable gratitude — appreciation beyond the confines of our vocabulary — for men like Stan who volunteer every day to be our first line of defense.”

After firing three shots inside the lobby, the gunman retreated back outside for unknown reasons. But he was still visible through the courthouse’s glass entrance, still holding a 12-gauge shotgun.

It was here the shootout began. A third court security officer, William Sherman, fired five shots, piercing the glass between himself and the gunman, according to public testimony.

More security officers, along with deputy U.S. marshals, quickly descended on the scene, firing more rounds. Together, including Gerrity and Gennaro, they forced the gunman to retreat down the steps of the courthouse and across the street, where he stationed himself among bushes at the Historic Fifth Street School, which was functioning as an office building.

Deputy U.S. Marshal Richard “Joe” Gardner joined the response from a stairwell on the west side of the building. He fired four rounds, stopping only when the gunman’s shotgun pellets struck him in the torso, arm, hand and head but missed his vital organs. He later underwent surgery.

Cornered but still firing, the gunman, Johnny Lee Wicks, 66, ignored commands to drop his weapon. During a barrage of exchanged rounds, he dropped dead with a shot to the head.

Just as the shootout ended, approaching emergency sirens could be heard on eyewitness footage, filmed from about a block away.

Authorities believe Wicks held a grudge against the government. Ahead of the shooting, he lost a federal lawsuit in which he sought to reinstate disability benefits that he had lost when he moved to Nevada from California.

The morning of the attack, he set fire to his apartment before heading to the courthouse, though no one in his building was injured. A medical examiner testified that Wicks had no alcohol or drugs in his system at the time of his death.

In the wake of the shootout, Cooper was hailed as a hero in local and national media. At his packed funeral a week later, filled with officers from multiple branches of law enforcement, Reid called him “selfless” and “a true professional.”

Then-Clark County Sheriff Doug Gillespie said Cooper, who worked as a Las Vegas police officer for 26 years before starting his career as a court security officer, “dedicated his entire life to law enforcement and public service.”

But because Cooper worked for a federal contractor, Akal Security, his family was repeatedly denied the more than $300,000 in line-of-duty benefits they believed they should have received in the wake of his death.

The funds are reserved for survivors of fallen public safety officers. Cooper’s family contended that he trained at the U.S. Marshals Service academy for his contracted security job. In the wake of his death, they accepted a Fallen Hero Award from the Marshals Service on his behalf. But they never saw a dime, his son, Marty Cooper, told the Review-Journal.

But nothing came of the bill, and it died. To this day, Cooper’s family is still seeking compensation.

Inside the courthouse where he died, 333 Las Vegas Blvd. South, a permanent memorial for Cooper now sits in the lobby. A small 9 a.m. service Monday will honor him at that memorial.

A similar service has been held each year since 2011, the same year his name was added to the National Law Enforcement Officers Memorial in Washington.