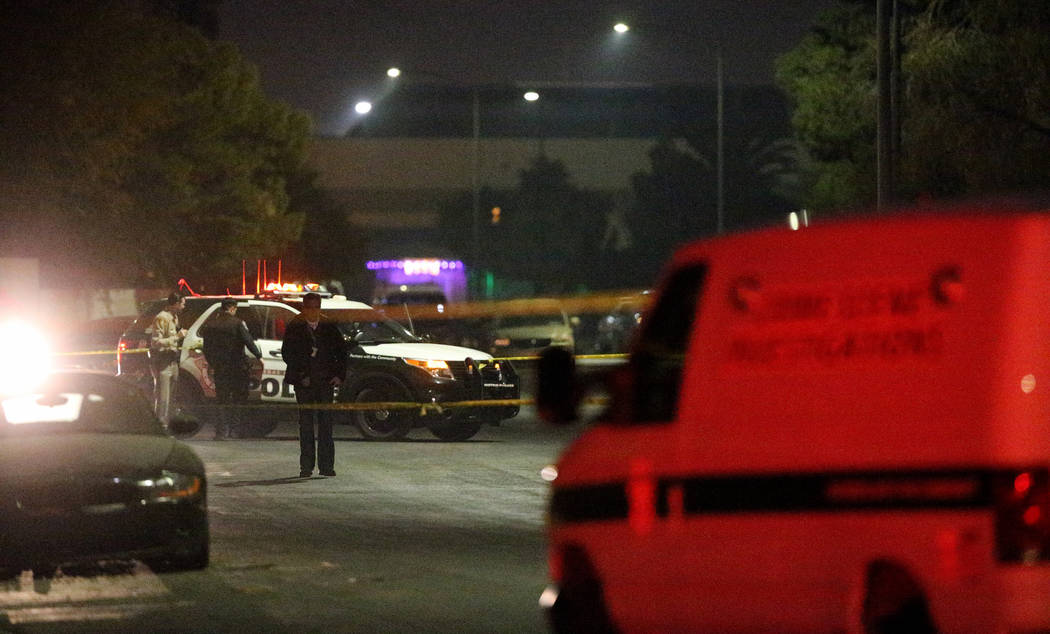 Las Vegas police investigate the scene in the 4800 block of Chantilly Avenue, near Charleston and Nellis boulevards where a man died in a drive-by shooting. It was the 169th homicide investigated by Las Vegas police for the year, surpassing last years record-breaking 168 homicides. K.M. Cannon Las Vegas Review-Journal @KMCannonPhoto

A man was killed in a drive-by shooting in the east Las Vegas Valley Sunday night, according to the Metropolitan Police Department, tying a grisly mark for the most homicides investigated by the agency since at least 1990.

Police received reports of a shooting at 8:35 p.m. on the 4800 block of Chantilly Avenue, near Charleston and Nellis boulevards at 8:35 p.m., said police spokeswoman Laura Meltzer.

Metro Lt. Dan McGrath said the man was setting off fireworks in the driveway with his girlfriend and another friend when a white or silver compact car pulled up and fired six or seven shots at him.

The man was struck several times and later died at UMC. The two witnesses told police they didn’t know the shooter.

Chantilly Avenue was hazy with smoke from fireworks popping across the neighborhood, but the street was silent. Police walked a young woman across the police tape. She was clutching her puffy jacket around her and crying quietly.

Before the night was out, another man was killed in a shooting near Alexander Road and Lamb Boulevard.

Sunday’s shootings cap a violent finale to 2017 for the valley in which 17 people were killed in the final 10 days of the year. That includes 14 in Metro’s jurisdiction, and all but one resulting from gun violence.

The Alexander killing was the 169th homicide investigated by Las Vegas police for the year, according to Las Vegas Review-Journal records. That surpassed the record-breaking 2016 total of 168 for the department and marked 2017 as the highest number of homicides investigated by Las Vegas police since at least 1990. Those numbers, which do not include the 58 people killed in the Oct. 1 mass shooting at the Route 91 harvest festival, include murders, self-defense killings and officer-involved shootings.