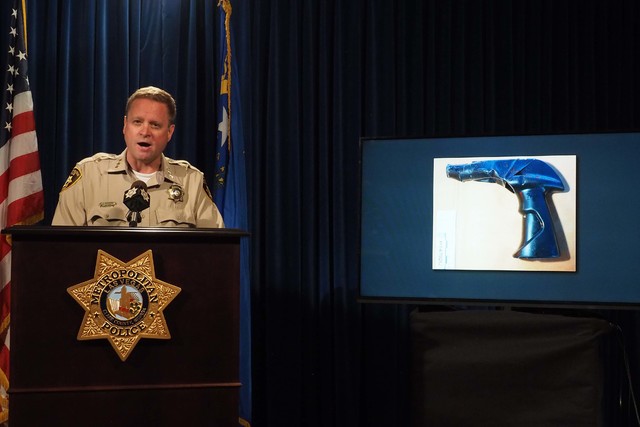 Metro Undersheriff Kevin McMahill speaks during a news conference at Metropolitan Police headquarters, Monday, Oct. 17, 2016, regarding a fatal officer-involved shooting on Oct. 12, 2016. A photo shows a device that the subject used in robberies that both officers and victims thought was a firearm. (Jerry Henkel/Las Vegas Review-Journal) 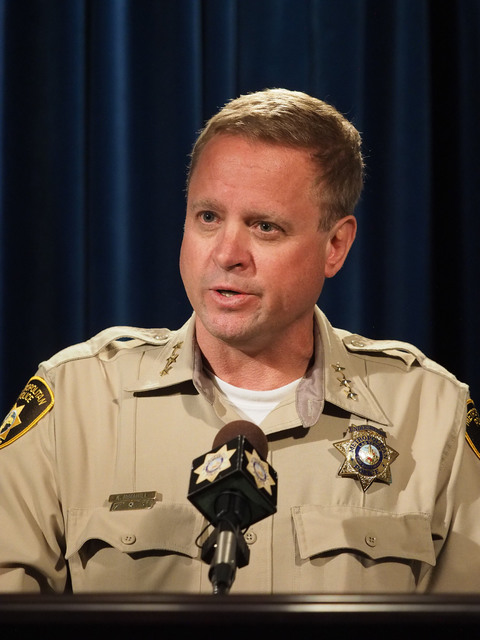 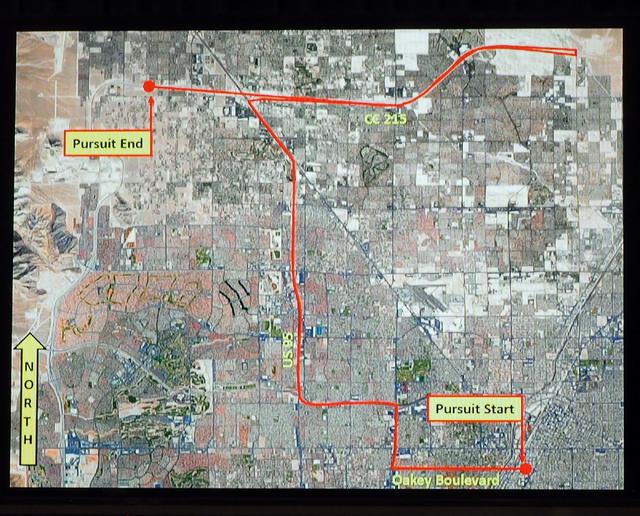 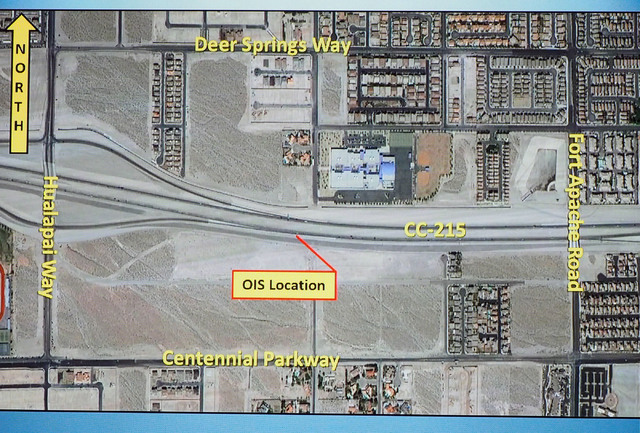 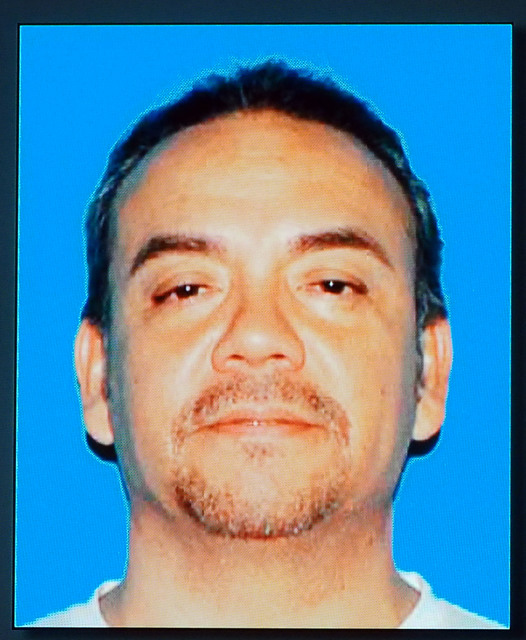 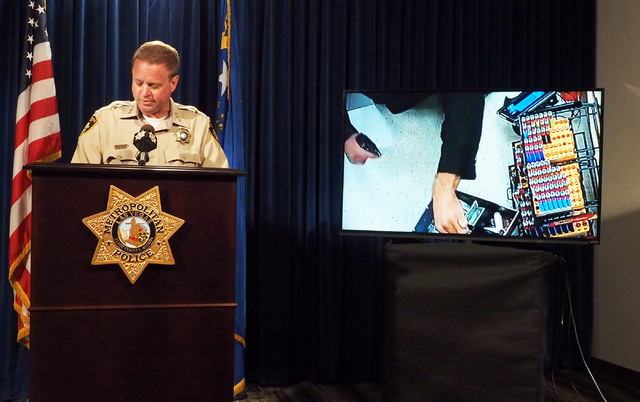 Metro Undersheriff Kevin McMahill speaks during a news conference at Metropolitan Police headquarters, Monday, Oct. 17, 2016, regarding a fatal officer involved shooting on Oct. 12, 2016. Video clips of robberies are displayed on a television next to McMahill. Jerry Henkel/Las Vegas Review-Journal. 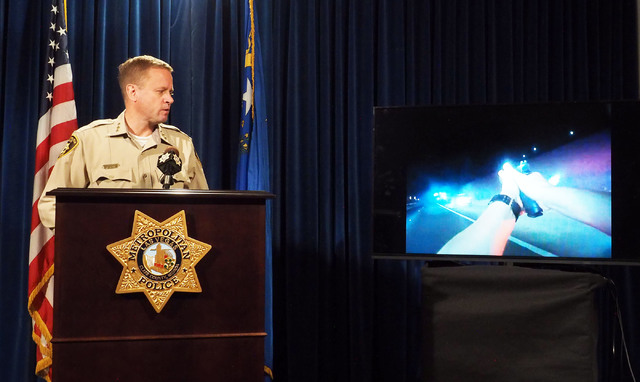 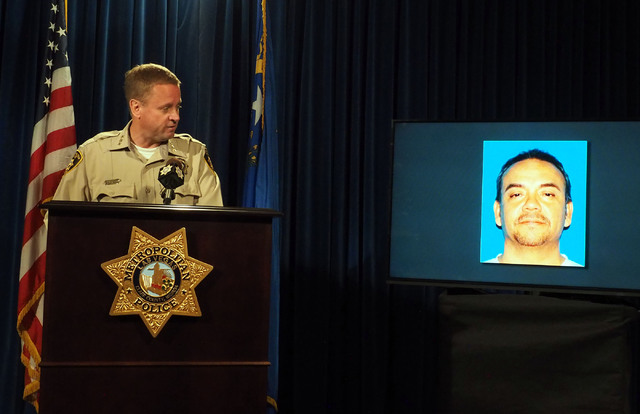 Metro Undersheriff Kevin McMahill looks at a photo of Rex Vance Wilson during a news conference at Metropolitan Police headquarters, Monday, Oct. 17, 2016, regarding a fatal officer involved shooting on Oct. 12, 2016. Wilson was killed at the scene by Metro officers. Jerry Henkel/Las Vegas Review-Journal. 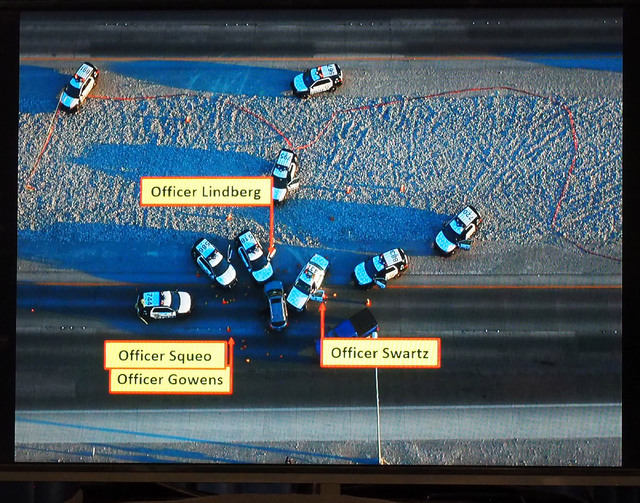 A photo of the shooting location is displayed as Metro Undersheriff Kevin McMahill speaks during a news conference at Metropolitan Police headquarters, Monday, Oct. 17, 2016, regarding a fatal officer involved shooting on Oct. 12, 2016. Jerry Henkel/Las Vegas Review-Journal. 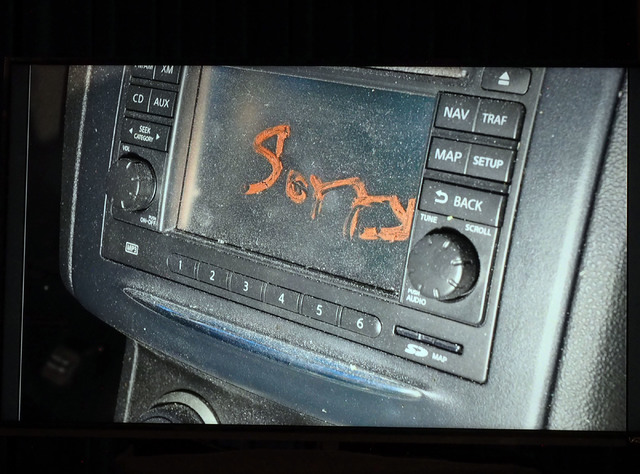 A photo showing the word 'Sorry' scribbled on the dash of a vehicle driven by Rex Vance Wilson is displayed as as Metro Undersheriff Kevin McMahill speaks during a news conference at Metropolitan Police headquarters, Monday, Oct. 17, 2016, regarding a fatal officer involved shooting on Oct. 12, 2016. Jerry Henkel/Las Vegas Review-Journal. 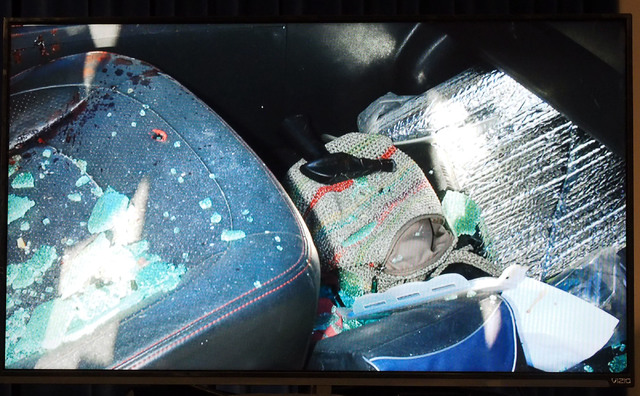 A photo of the inside of a car driven by Rex Vance Wilson is displayed as Metro Undersheriff Kevin McMahill speaks during a news conference at Metropolitan Police headquarters, Monday, Oct. 17, 2016, regarding a fatal officer involved shooting on Oct. 12, 2016. Jerry Henkel/Las Vegas Review-Journal.

The man fatally shot by Las Vegas police officers after a string of armed robberies and a miles-long car chase had no weapon, the department said Monday.

Las Vegas police revealed new details about the officer-involved shooting of the alleged robbery suspect at an afternoon briefing for reporters. Wilson was killed late Wednesday on the 215 Beltway near North Hualapai Way. Four officers fired at Wilson after attempts to arrest him failed.

Little is known about what the led the suspect to commit the robberies, McMahill said. Wilson was last involved with a crime in South Dakota in 1988, when he was arrested for illegal fishing, simple assault and battery.

Wilson was a Marine Corps veteran who served on active duty and was honorably discharged from the reserves afterward.

McMahill said Wilson’s wife reported him missing the day he died. She told police she had not seen him since Oct. 8, four days earlier, when he texted her “goodbye.” She told police he may be a danger to himself and had a history of depression and compulsive gambling and abusing prescription pills and cocaine.

Wilson’s phone logs showed he had called a suicide hotline and his insurance company, McMahill said. And police recovered a glass narcotics pipe from the car.

The police pursuit began when officers saw the man driving near the Stratosphere about 11:15 p.m. They tried to stop his vehicle near Wyoming Avenue and Commerce Street.

The vehicle Wilson was driving matched the description of a car involved in several crimes. Police said officers connected the suspect to 16 robberies throughout the valley beginning Oct. 3. McMahill said detectives are looking to see whether the man can be linked to other robberies.

Las Vegas police have said the officers began chasing the suspect after identifying the vehicle’s license plates. The pursuit continued several miles through the valley before ending on the 215 Beltway.

Squeo, Gowens, and Lindberg joined the department in 2014; Swartz joined in 2008. All have been placed on paid leave.

All four officers had body-worn camera systems, and the department played video clips from each officer. The videos showed the officers surrounding Wilson’s vehicle, getting out of their patrol cars and opening fire.

McMahill said Wilson pointed the faux gun at the officers, although it isn’t apparent from the body cam footage.

None of the officers gave statements to detectives conducting a criminal investigation of the shooting.

Before he died on the scene, Wilson scribbled the word “sorry” on the car’s dashboard in what appeared to be blood, McMahill said.