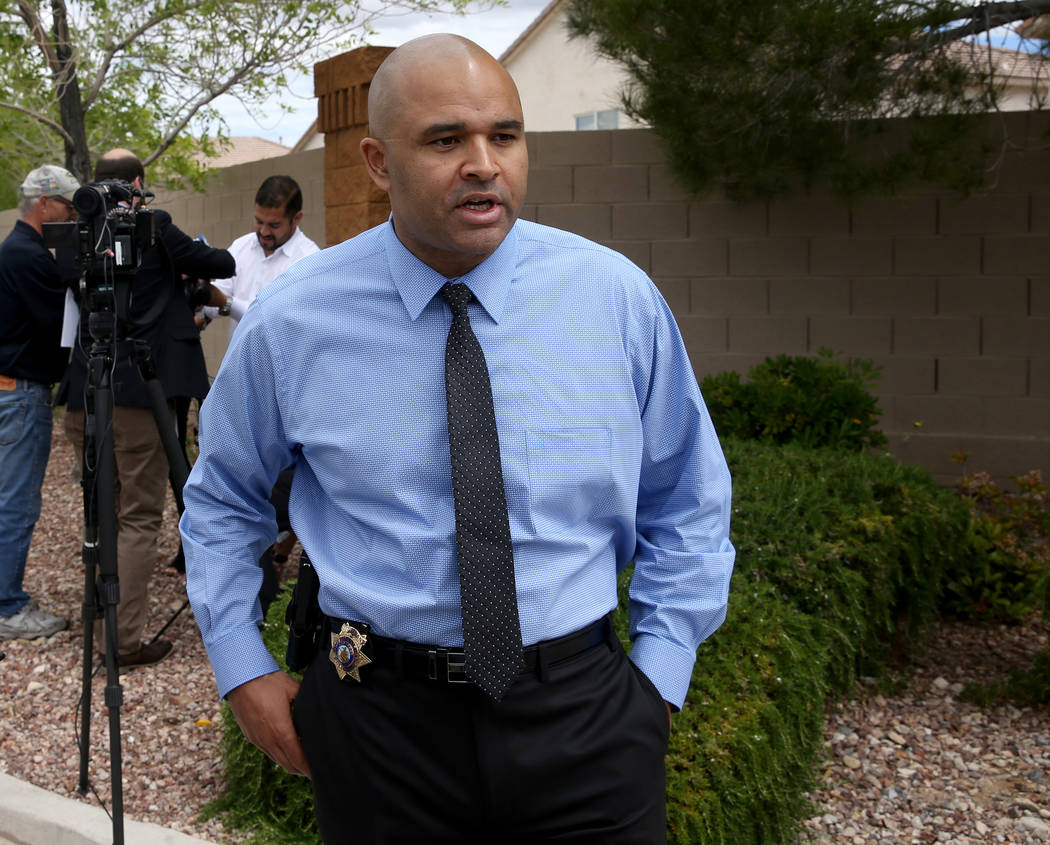 Clark County is on pace for a dramatic drop in its yearly homicide numbers, driven largely by a sharp decrease in Las Vegas police investigations during the first half of the year.

Since 2017, the Las Vegas Review-Journal has tracked homicide investigations across the county, including officer-involved shootings, accidental shootings and cases of self-defense.

Law enforcement agencies in the county have investigated 70 homicides between Jan. 1 and June 30, according to Review-Journal records. It’s a stark drop from the 109 homicides investigated throughout the county during that time last year.

The Metropolitan Police Department, which handles the city of Las Vegas and unincorporated Clark County, has investigated 51 homicides so far this year, compared with 89 killings investigated in that same period last year, the records show. Metro is on pace to have its lowest yearly total since the 2014 election of Sheriff Joe Lombardo, who has prioritized addressing violent crime.

The department is on pace for its second straight yearly drop in homicides, which hasn’t happened since 2010-12, according to Metro numbers. The department probed 160 homicides last year and 171 in 2017, excluding the 58 people killed in the Route 91 Harvest festival mass shooting.

Metro Lt. Ray Spencer, who has led the homicide unit since early 2018, attributed the drop to preventive efforts, including the more than 600 patrol officers hired since 2017 and a coordinated, targeted deployment of officers to previously identified or potential crime hot spots.

While numbers fluctuate, Spencer said he doesn’t think the significant drop since 2017 is an accident.

“When you see a drop in your murder rate, it tells you that your preventative measures are working,” he said.

Detectives are also solving homicides at a rate rarely repeated by a department of Metro’s size, he said, with only four of its 2019 cases unresolved as of Tuesday. Metro solved roughly 90 percent of its cases from 2018, he said.

“Our ‘solvability’ is one of the best in the United States, if not the world,” Spencer said.

He lauded the relentless work put in by the homicide unit’s 24 detectives, two investigative specialists and four sergeants to solve cases, as well as a forensics lab he called “second to none” in its ability to quickly turn around forensics testing. Metro “frontloads” its scene investigations by sending six detectives, a sergeant, Spencer and computer forensics specialists, he said.

Spencer said Metro also differs from other agencies in that it pays for significant amounts of overtime required for “crucial” followup in the days and weeks after the initial investigation.

Since he joined the homicide unit, Spencer began a peer review process to identify shortcomings or missed elements in unsolved cases. He and his captain, Sean Toman of the homicide/sex crimes bureau, also have implemented an all-hands-on-deck, 24/7 investigation procedure for Metro’s biggest cases. This so-called “major case protocol” borrows help from across Metro and is being expanded throughout the department, he said.

“We are going to spare absolutely no expense,” Spencer said. “We don’t care what resource we need. Whatever it is, we are bringing it to the table to help solve that case.”

While homicide numbers dropped in Metro’s jurisdiction last year, law enforcement in the valley’s suburbs investigated a record number of killings. But as of mid-2019, only North Las Vegas was on pace for fewer homicides.

At this time last year, North Las Vegas had seen 14 killings. But as of Tuesday, according to newspaper records, the city had investigated 11 this year.

In particular, the city saw a rise in homicides during the latter part of 2018, bringing the total to 36. That increase was driven by a string of violence against school-age victims that claimed the lives of six people ages 19 and younger from September through December.

As 2018 came to a close, its deadly trend spilled into the new year, prompting a Review-Journal examination in late January of the most recent killings at the time.

The analysis revealed a roughly 2-square-mile area in the North Las Vegas Police Department’s southern area command where about 75 percent of its homicides had occurred between December and January. The zone is bordered by Carey Avenue to the north, Owens Avenue to the south, Fifth Street to the west and Pecos Road to the east.

In response, Chief Pamela Ojeda added a new patrol squad into the area. And since then, according to police spokesman Eric Leavitt, 20 more recruits have graduated from the department’s academy. As of Tuesday, all but four had completed field training and were officially on patrol duty.

Ojeda also has been exploring other methods to curb last year’s violence, including a more concentrated effort on community outreach.

This summer, for example, the department is hosting teen pool parties every other weekend at the local YMCA, 3050 E. Centennial Parkway. Leavitt said the second party of the season will be held from 6 to 9 p.m. Saturday.

“We are very excited about what is going on here at the NLVPD and the City of North Las Vegas,” he told the Review-Journal this week, “and we will continue to work hard with our communities help to make our city safer.”

Henderson police opened seven homicide investigations during the first six months of this year; the department investigated five by this time last year and would finish 2018 with 17. Boulder City investigated a murder-suicide in March.

Henderson robbery and homicide detective Wayne Nichols said he hasn’t noticed any trends in the city’s homicides that have stood out to him. He suggested that the uptick in homicides is due in part to a rise in population over the past few years.

Of the seven homicides, five have resulted in arrests, according to Review-Journal records.

The killing of Matthew Lee Mergerson on Jan. 24 is still being investigated, while the fatal shooting of Shannon Howell was at the hands of two security guards at a Henderson casino, Moore said.