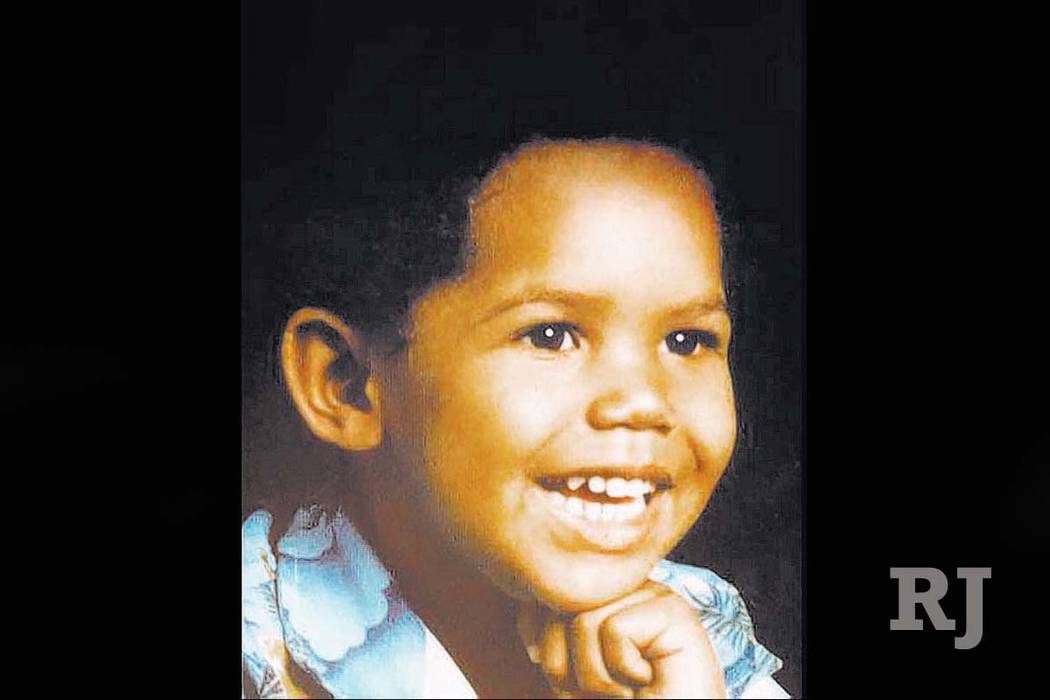 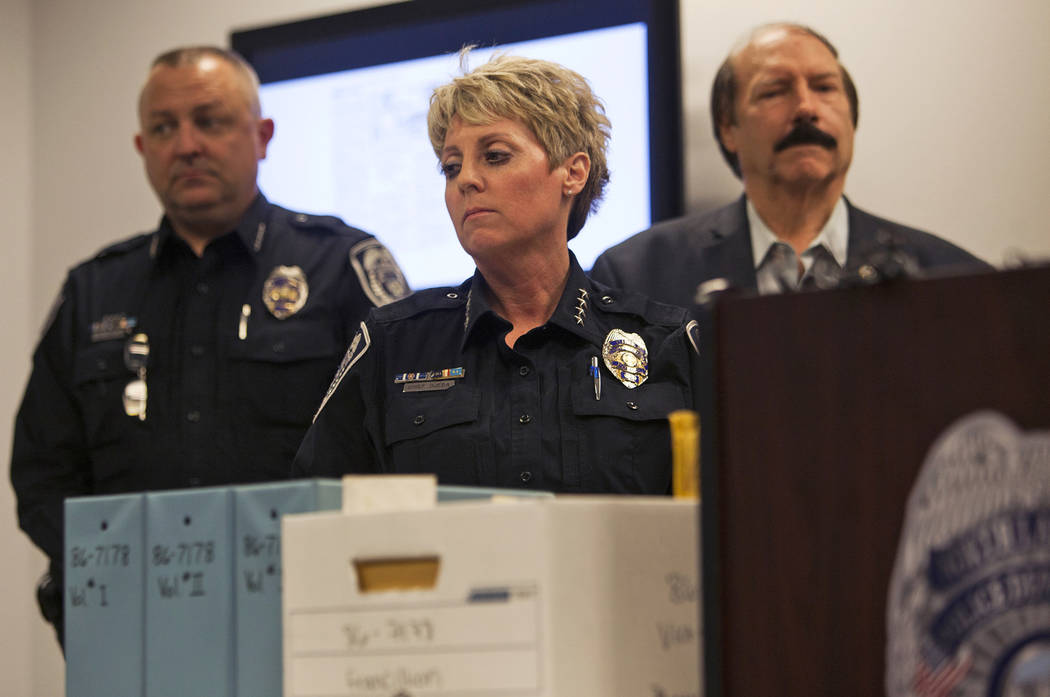 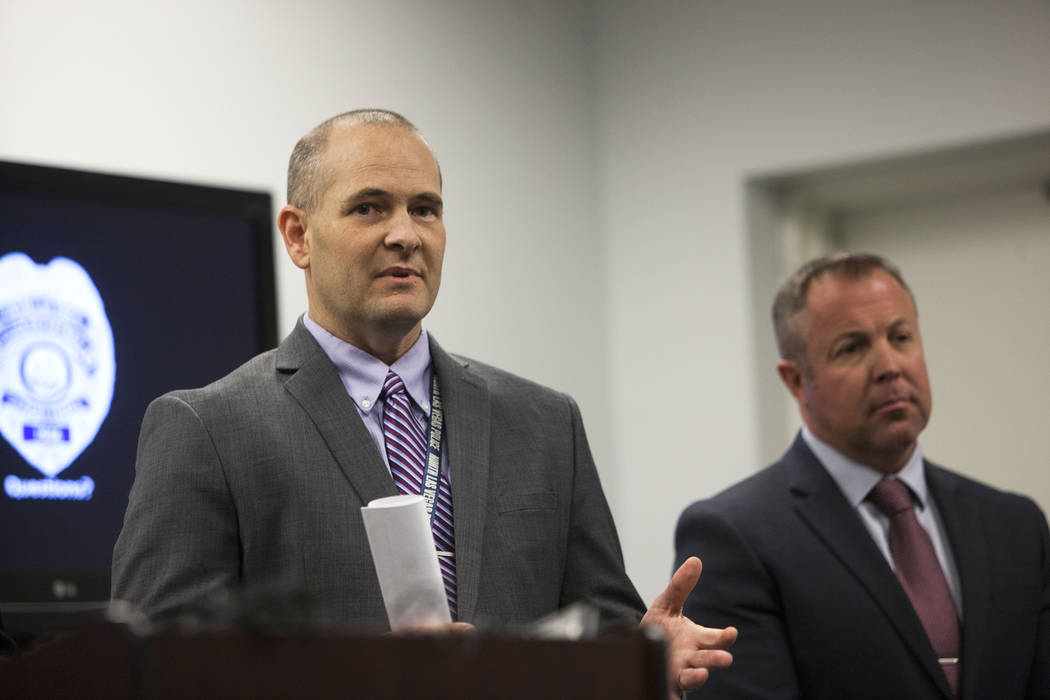 Detective Steven Wiese answers a question from the media next to Detective Sean Sprague at the North Las Vegas Detective Bureau in North Las Vegas, Monday, Feb. 11, 2019. Officials gathered to discuss new discoveries in the case of the disappearance of the 3-year-old Francillon Pierre who vanished in 1986. Wiese and Sprague are the current detectives assigned to the cold case. (Rachel Aston/Las Vegas Review-Journal) @rookie__rae 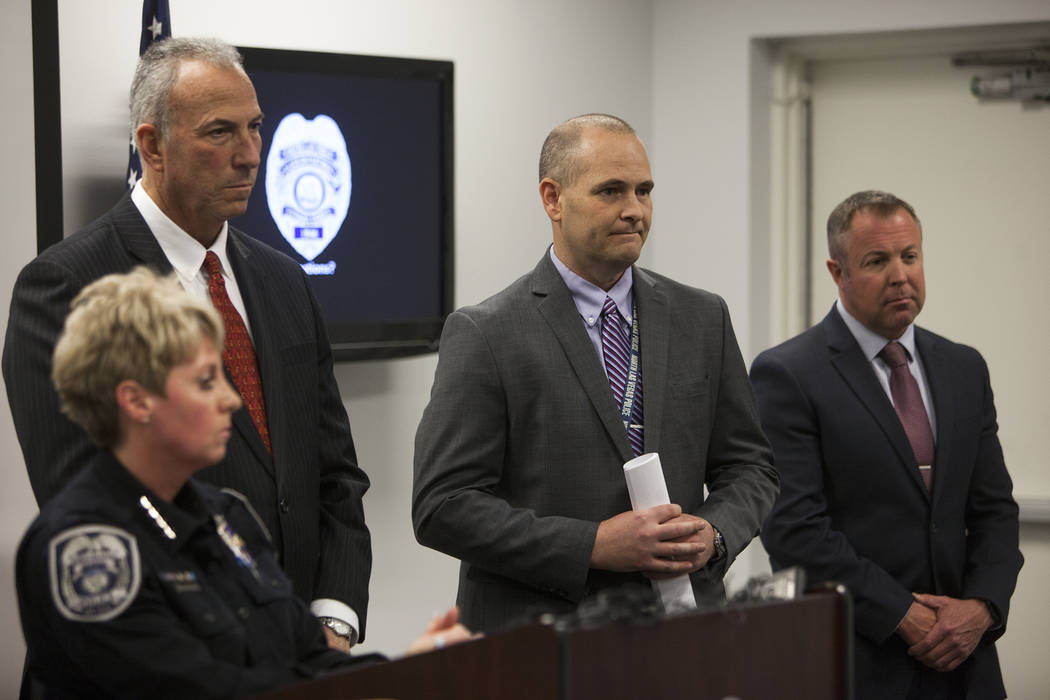 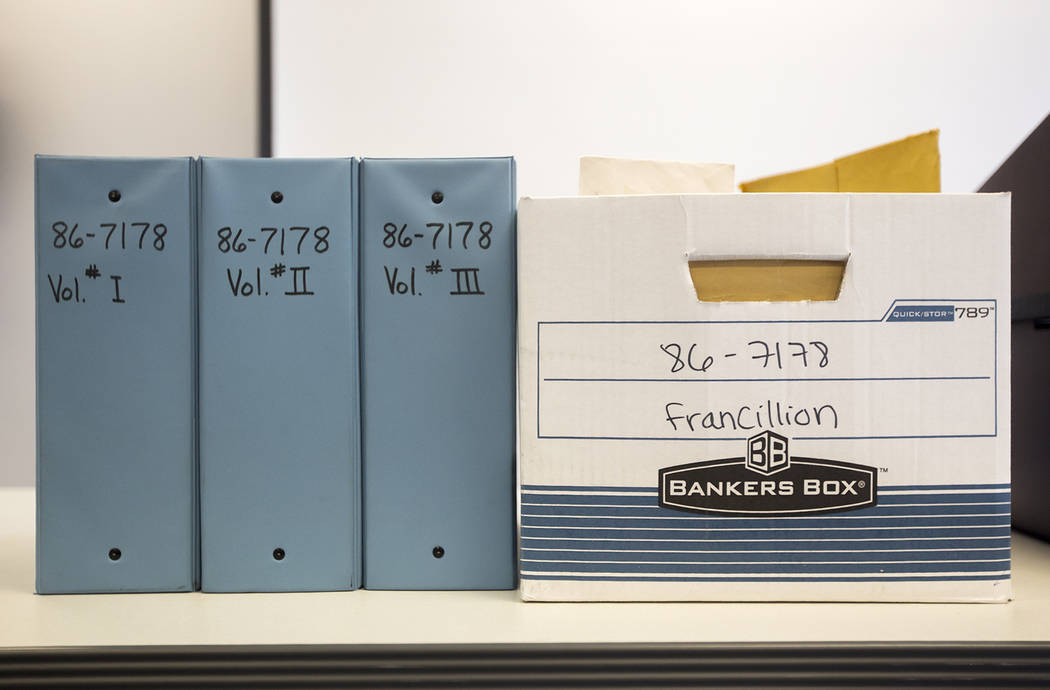 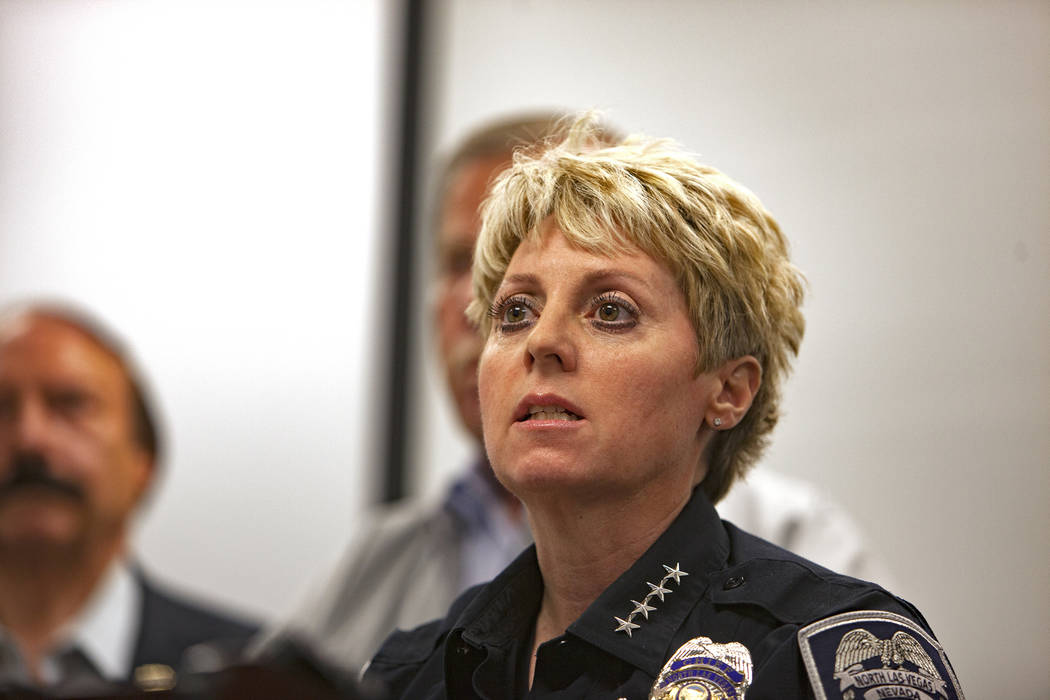 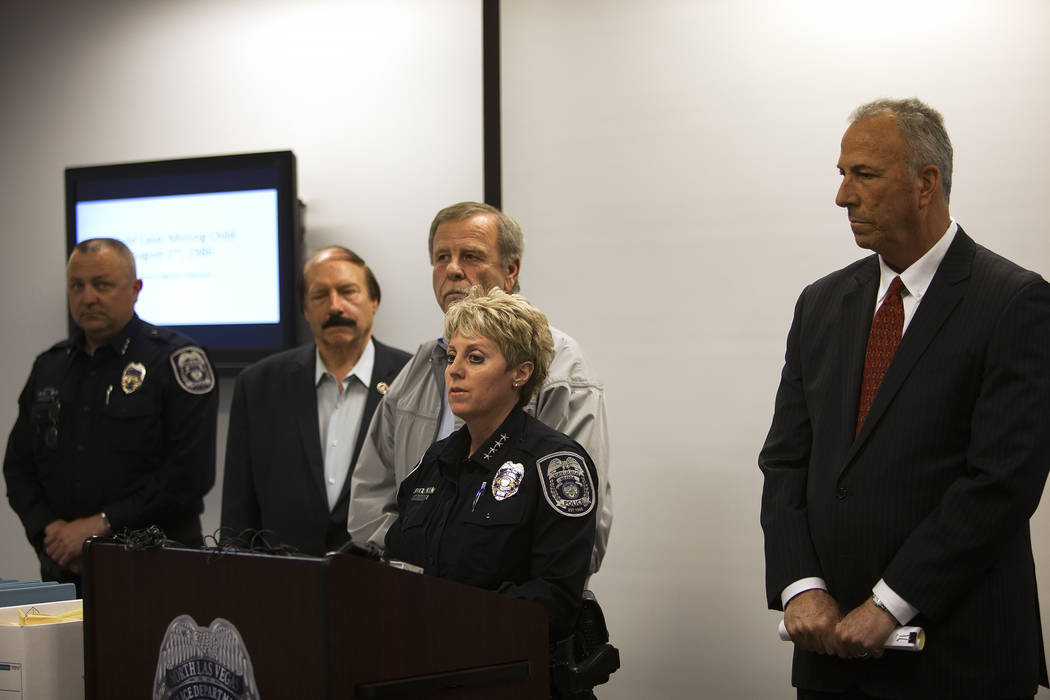 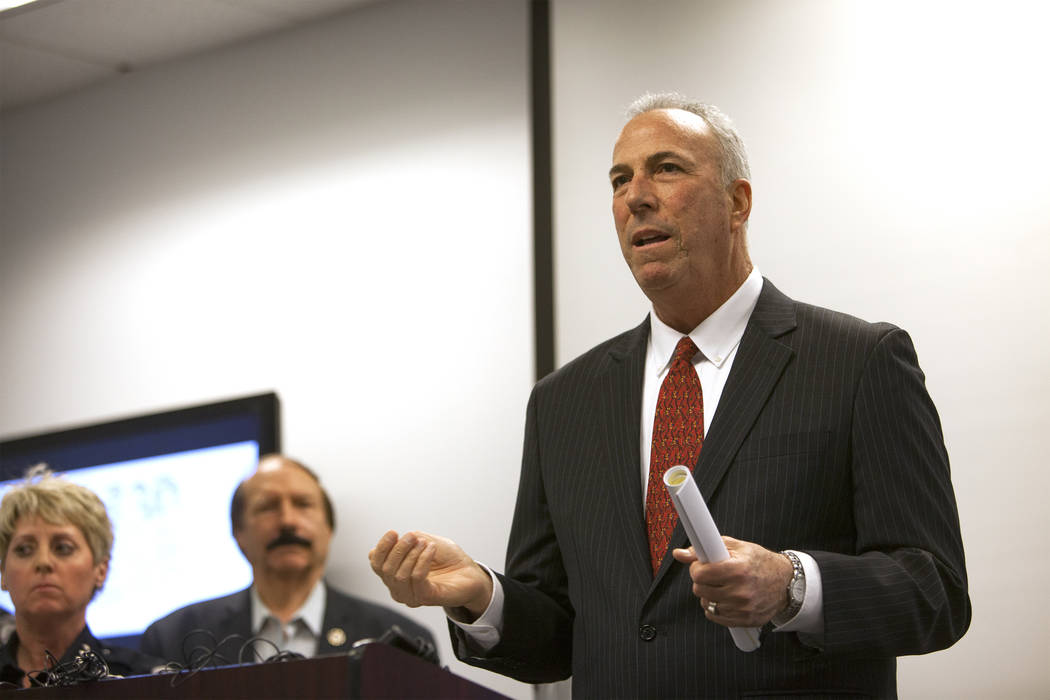 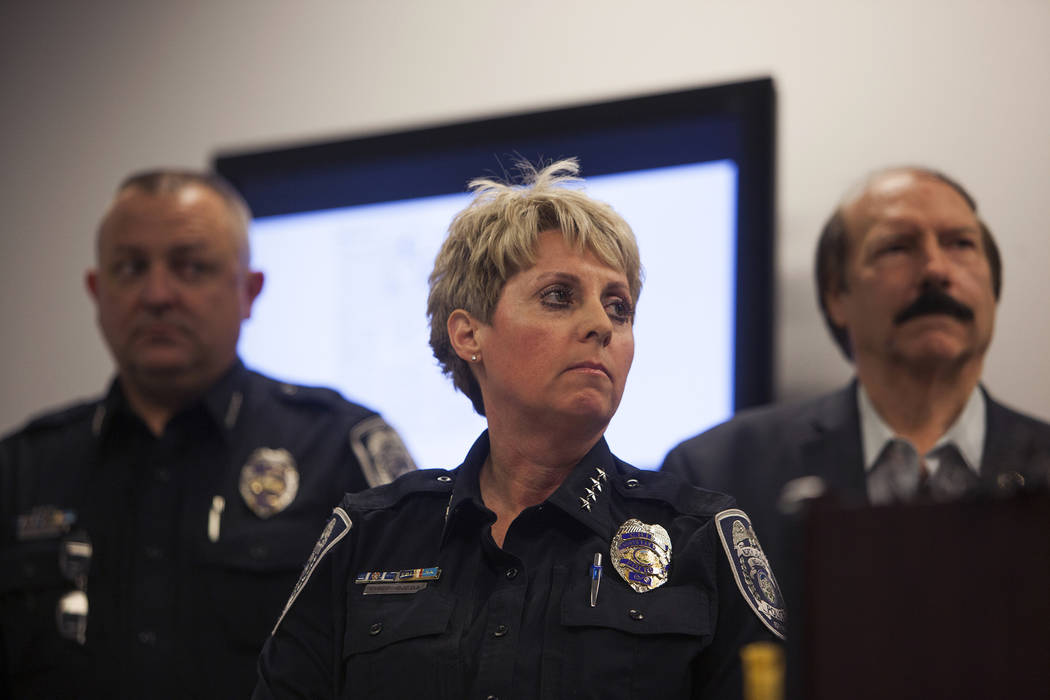 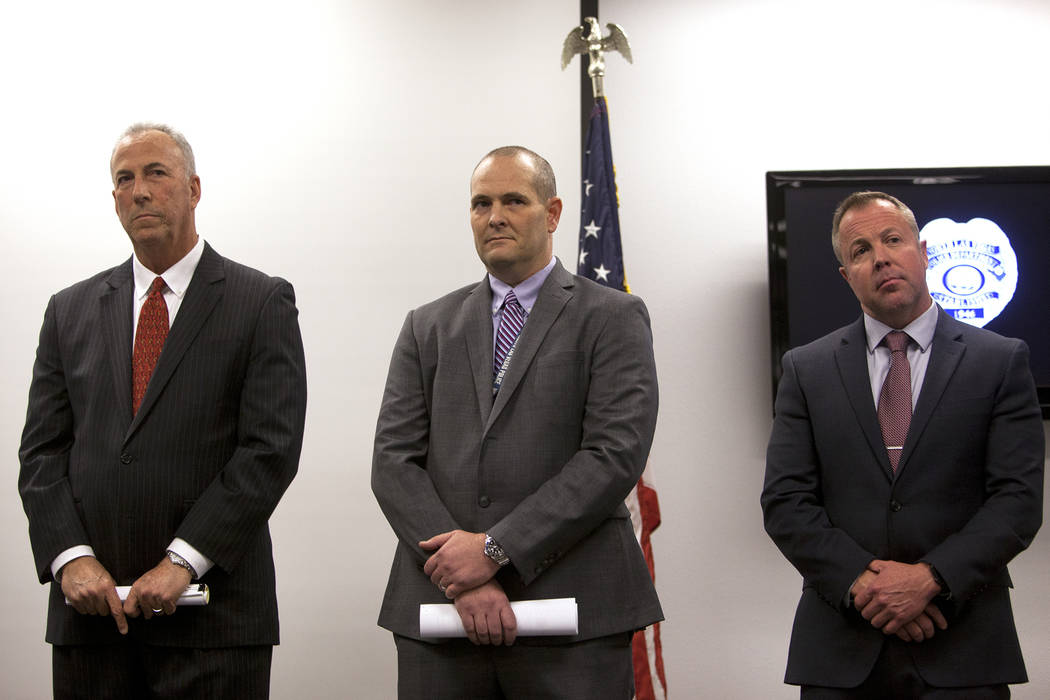 District Attorney Steve Wolfson, from left, Detective Steven Wiese, and Detective Sean Sprague, at the North Las Vegas Detective Bureau in North Las Vegas, Monday, Feb. 11, 2019. Officials gathered to discuss new discoveries in the case of the disappearance of the 3-year-old Francillon Pierre who vanished in 1986. Wiese and Sprague are the current detectives assigned to the cold case. (Rachel Aston/Las Vegas Review-Journal) @rookie__rae 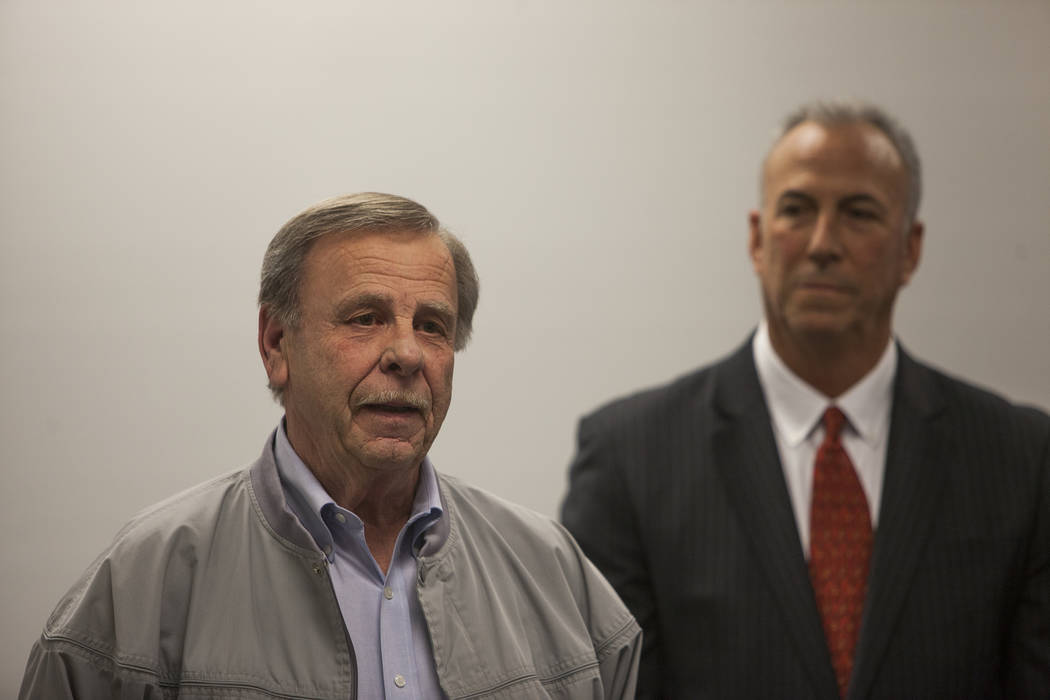 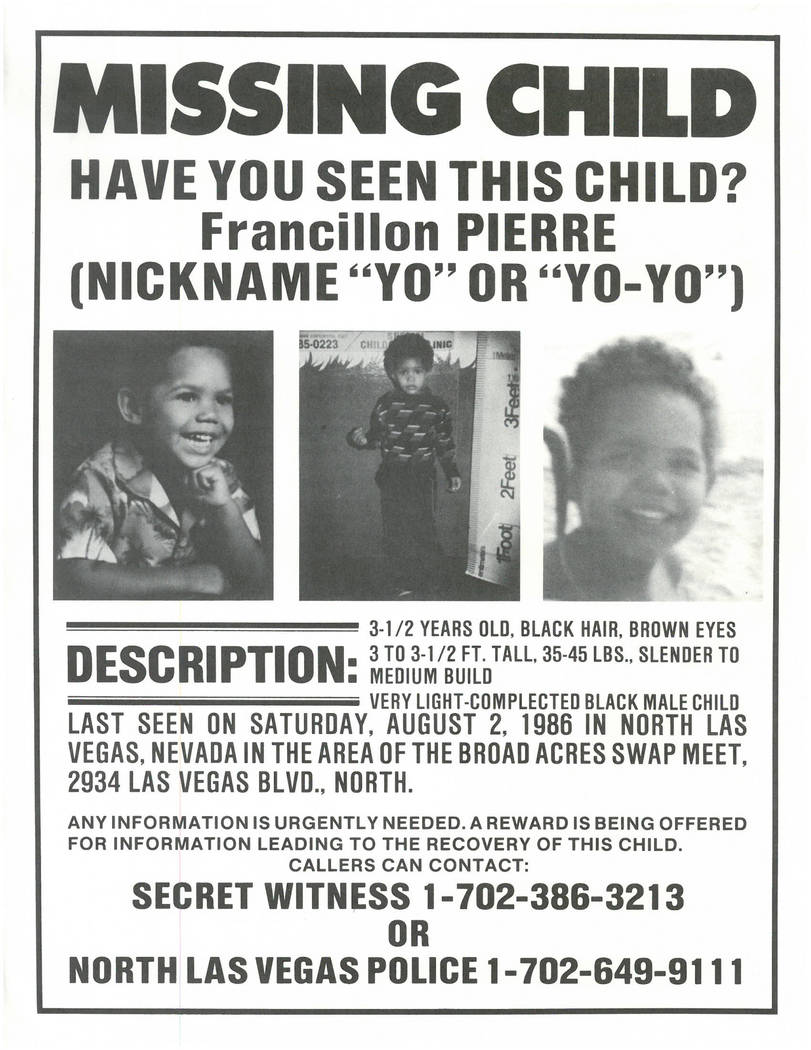 The more than 30-year-old documents sat in a yellowing cardboard box labeled “Francillon” and a trio of binders.

On Monday, the evidence in the disappearance of 3-year-old Francillon Pierre sat front and center at a news conference for the announcement of the arrest of his mother on a murder charge.

Francillon, known by his nickname YoYo, was reported missing Aug. 2, 1986, from the then-Broad Acres swap meet on Las Vegas Boulevard North. It sparked a missing persons case that, until recently, had gone cold.

On Dec. 13, prosecutors charged his mother, Amy Elizabeth Fleming, 60, with murder. Fleming was long suspected in her son’s disappearance, though police didn’t have “enough evidence to prove or disprove” her involvement, North Las Vegas Police Chief Pamela Ojeda told the media Monday at a news conference.

“Although we are saddened that we could not bring you good news today that we found Pierre alive and well, we are fortunate that we could bring some closure to those affected by this 32-year-old cold case,” Ojeda said.

A development in 2017 sparked a second look at the case, Ojeda said. North Las Vegas police learned that somebody had attempted to apply for a birth certificate under Francillon’s name in what Ojeda called attempted identity theft.

Detectives spent the next year and a half re-examining the case and during that time uncovered new evidence and had witnesses come forward with new information, Ojeda said. In that time, police hadn’t found a “smoking gun,” such as DNA evidence or Francillon’s body to help prove their case against Fleming, said Detective Steven Wiese, who began investigating the cold case in 2017.

“This is a case of a lot of little things that, put together, gives us the knowledge that Amy Fleming was involved in the homicide of her child,” Wiese said.

Fleming was jailed Jan. 29 in Palm Beach, Florida, and is on her way to Nevada, authorities said. However, the arrest didn’t mark the closure of the case, and police are still investigating, Ojeda said.

During the initial investigation more than three decades ago, Fleming and her then-fiance, Lee Luster, claimed that the boy had slipped away from them while they shopped for a bicycle at the swap meet.

However, witnesses at the swap meet that day didn’t see Francillon with Fleming or Luster, Ojeda said. Neighbors hadn’t seen Francillon leave the house in the weeks leading up to his reported disappearance, she said.

“We believe that they were at the swap meet as a diversion to say that he went missing and that he had been deceased at that time previous,” Wiese said.

An arrest affidavit for Fleming indicated that she and Lee rarely discussed Francillon’s disappearance in letters from when they served time for lying during interviews with police.

But during the review, police pieced together one letter that Fleming wrote to Luster. It was “torn into dozens of small pieces,” Ojeda said.

She read a quote from that letter: “What happened was totally unintentional, I’m sorry, I hope you know that.”

Luster, who was not Francillon’s biological father, lives in Florida, police said Monday. And as far as they know, he and Fleming had no children.

Ojeda cited an ongoing investigation when asked to discuss whether Luster could be arrested. North Las Vegas Justice Court records didn’t show any pending charges for Luster, who is still considered a person of interest in the case.

Court documents associated with Fleming’s murder charge suggest that there is a co-defendant, but information in the documents was redacted.

It remains unclear how Francillon died, Ojeda said, and it wasn’t clear where detectives think his body may be.

“I would hope that Ms. Fleming would tell us that,” Wiese said.

During the renewed look at the case, detectives reviewed witness statements, police reports, news articles written at the time and polygraph exam results.

The affidavit cited an Aug. 30, 1986, garage sale hosted by Fleming and Luster where some of Francillon’s toys were for sale.

Witnesses told police on March 10, 1987, that they had overheard a conversation between a man they recognized as Luster through news reports and an unknown woman during a jail visit, according to the affidavit. In that conversation, the man said Fleming was responsible for Francillon’s death, the affidavit said.

“At one point he got very excited, stood up and yelled Amy killed the baby. And threw his head down on the table,” according to a witness statement to police.

Fleming took polygraph tests in August and December 1986 and both times was found to be “deceptive” about her knowledge of the boy’s disappearance, the affidavit said.

In August 2018, a polygraph examiner, who had given tests to Fleming and another person in 1986, contacted Wiese, the affidavit said.

“(He) said that Amy and (redacted) were so deceptive during their polygraphs with him that he was sure they had killed Francillon and dumped his body in Lake Mead,” the affidavit said.

At Monday’s news conference, Ojeda credited those who worked the initial investigation, including retired Detective Bob King and retired FBI agent Joe Dushek, both of whom were in attendance.

King appeared emotional when discussing an arrest in the case, which he said provided a bit of closure despite the fact that Francillon had not been found alive.

“This is one case in my career that I always felt uncomfortable about,” he said. “The fact that I could not resolve it successfully, and particularly when you talk about a 3-year-old little boy.”

Because the investigation remains open, Ojeda asked anybody with additional information on the case to call North Las Vegas police at 702-633-9111.

When Francillon went missing, police went door to door, showing a picture of the missing boy to neighbors in the area of Pecos Road and Las Vegas Boulevard North, where he was last seen, the Review-Journal reported at the time.

Missing Child Poster by on Scribd

Less than two weeks later, on Aug. 14, 1986, the couple contacted a clairvoyant who said the boy was safe and with “someone close in his bloodline,” the Review-Journal reported. At the time, Luster speculated that “it is a possible parental abduction.”

Fleming and Luster had repeatedly accused Francillon’s biological father, Jean Pierre of Haiti, of involvement in the boy’s disappearance but police cleared him of any wrongdoing. Wiese, the North Las Vegas detective, said Monday that he had spoken with members of Pierre’s family as part of the renewed look into Francillon’s case.

Luster and Fleming were arrested on Dec. 17, 1985, after a babysitter reported the boy had possibly been abused, the Review-Journal reported at the time. Police reports revealed Francillon had 30 to 40 large welts on his back and neck.

Police became suspicious and after multiple interviews discovered a series of “lies” told to them by the Fleming and Luster, who were married by that time, the Review-Journal reported. Among them was Lee Luster’s statement that friends had seen the boy within a week before the disappearance was reported, the Review-Journal said in an April 13, 1992, story.

King, the initial detective on the case, had determined that nobody had seen Francillon alive within a week or two of his disappearance, the affidavit said.

In 1998, a child’s skull and bones were found on the shore of Lake Mead. Luster had told police that he had taken the Francillon on a camping trip at Lake Mead several days before the boy disappeared. Luster told detectives he didn’t kill Francillon, but said that if he had killed him, he would have cut him up, the Review-Journal reported.

In the affidavit for Fleming, police noted that Luster’s explanation of what happened on the trip was “inconsistent and did not appear to be believable.”

The next day, police said the remains found at Lake Mead probably were not Francillon’s — light-colored hairs found on the skull did not match the boy’s.