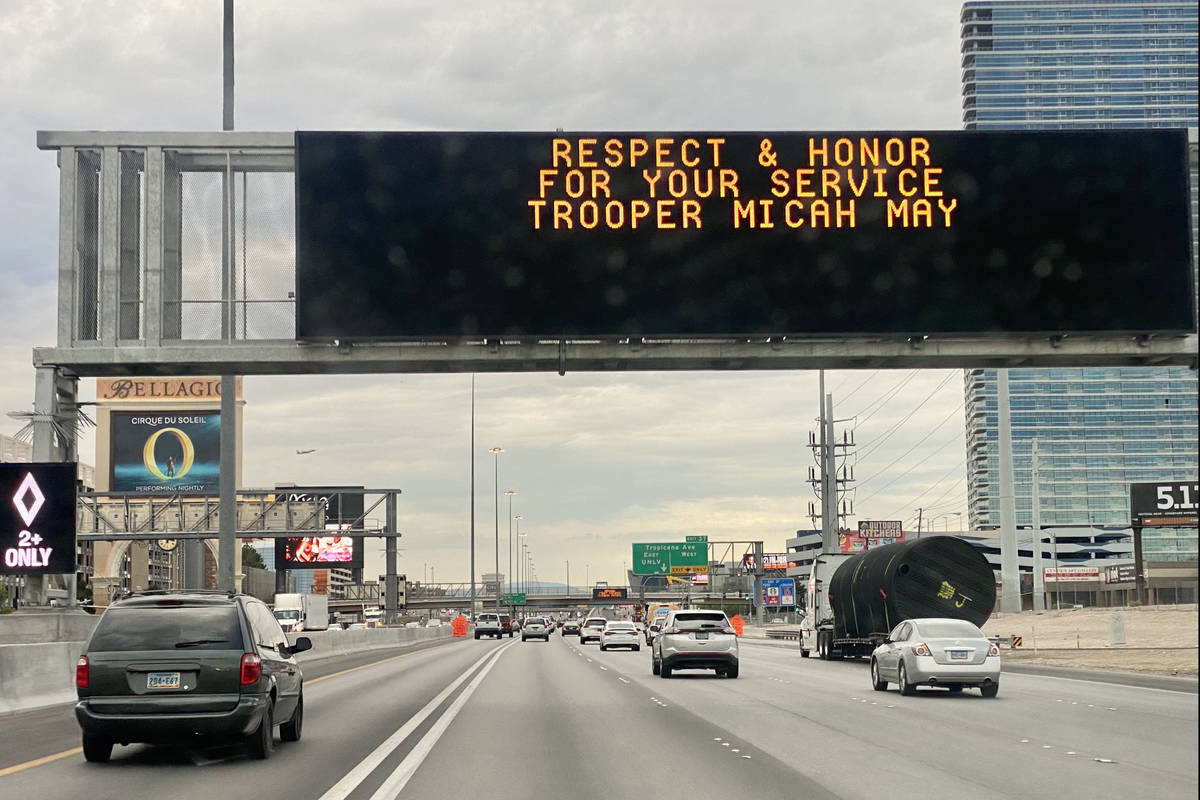 A sign for Nevada Highway Patrol trooper Micah May is seen on southbound Interstate 15 in Las Vegas, Friday, July 30, 2021. May died at a hospital on Thursday, after he was struck by a stolen vehicle this week. (L.E. Baskow/Las Vegas Review-Journal) 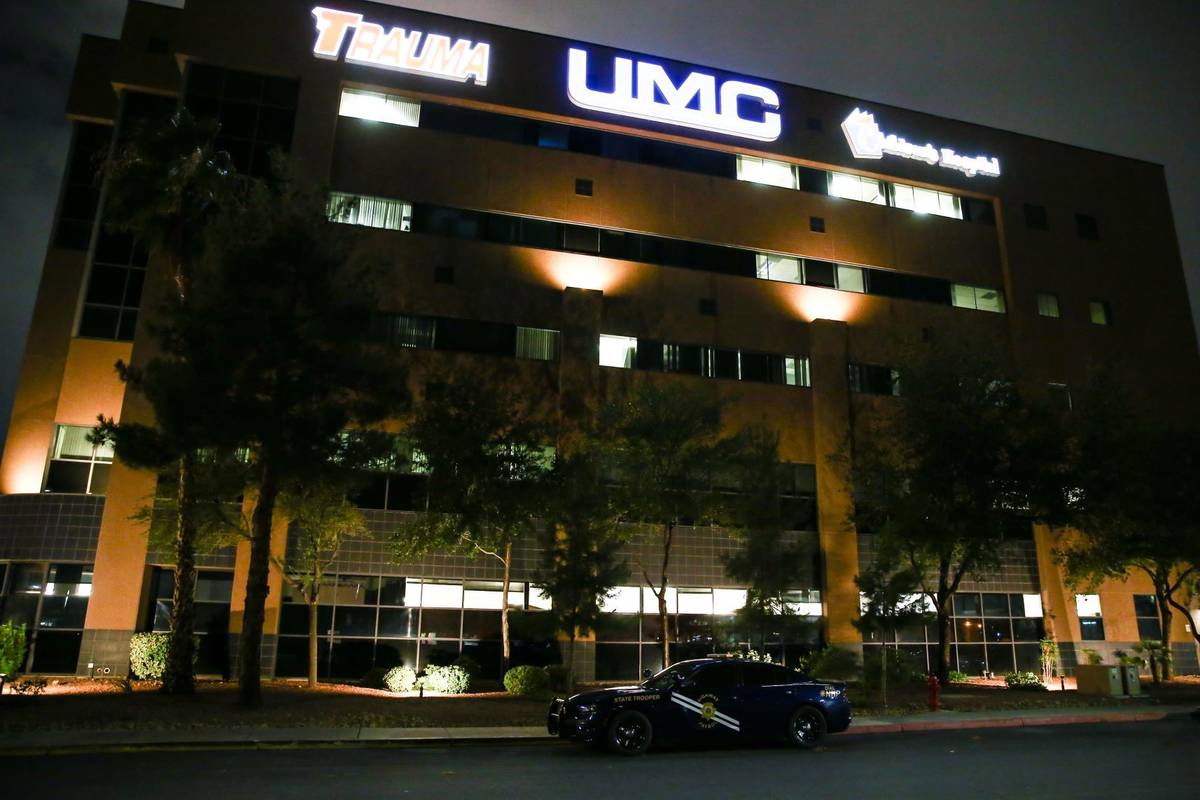 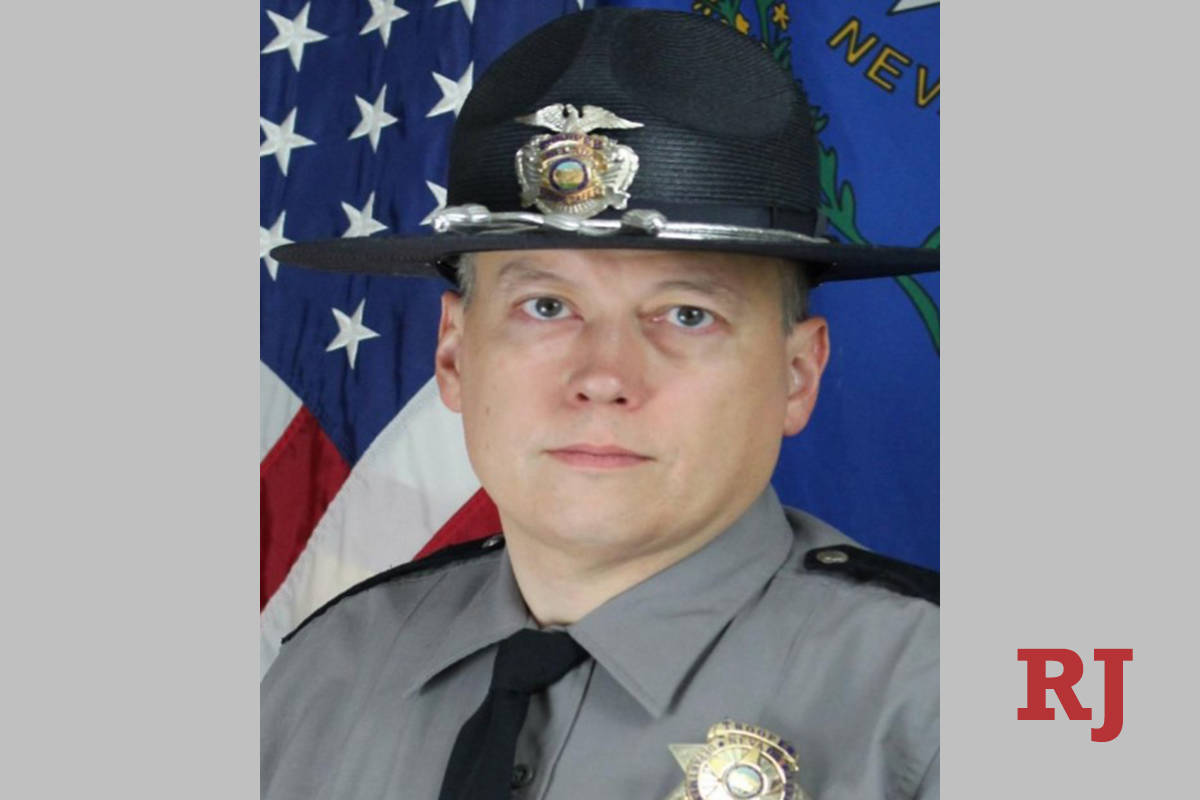 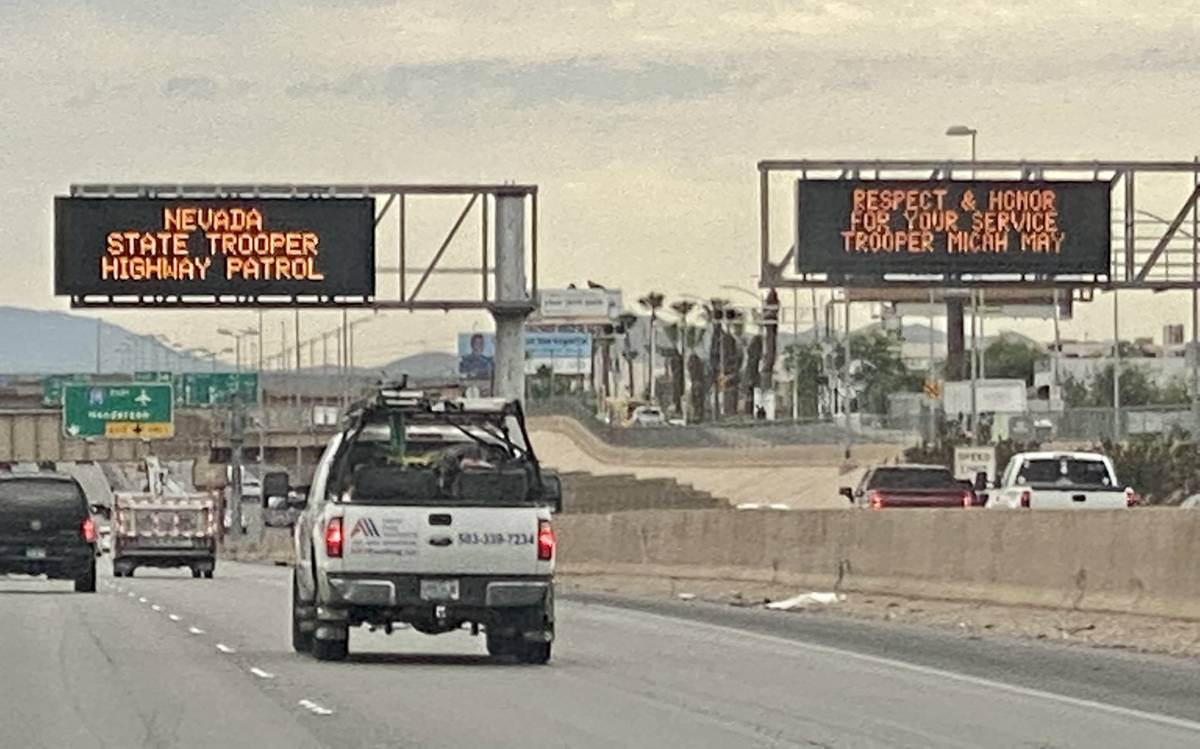 Two signs for Nevada Highway Patrol trooper Micah May are seen on southbound Interstate 15 in Las Vegas, Friday, July 30, 2021. May died at a hospital on Thursday, after he was struck by a stolen vehicle this week. (L.E. Baskow/Las Vegas Review-Journal) 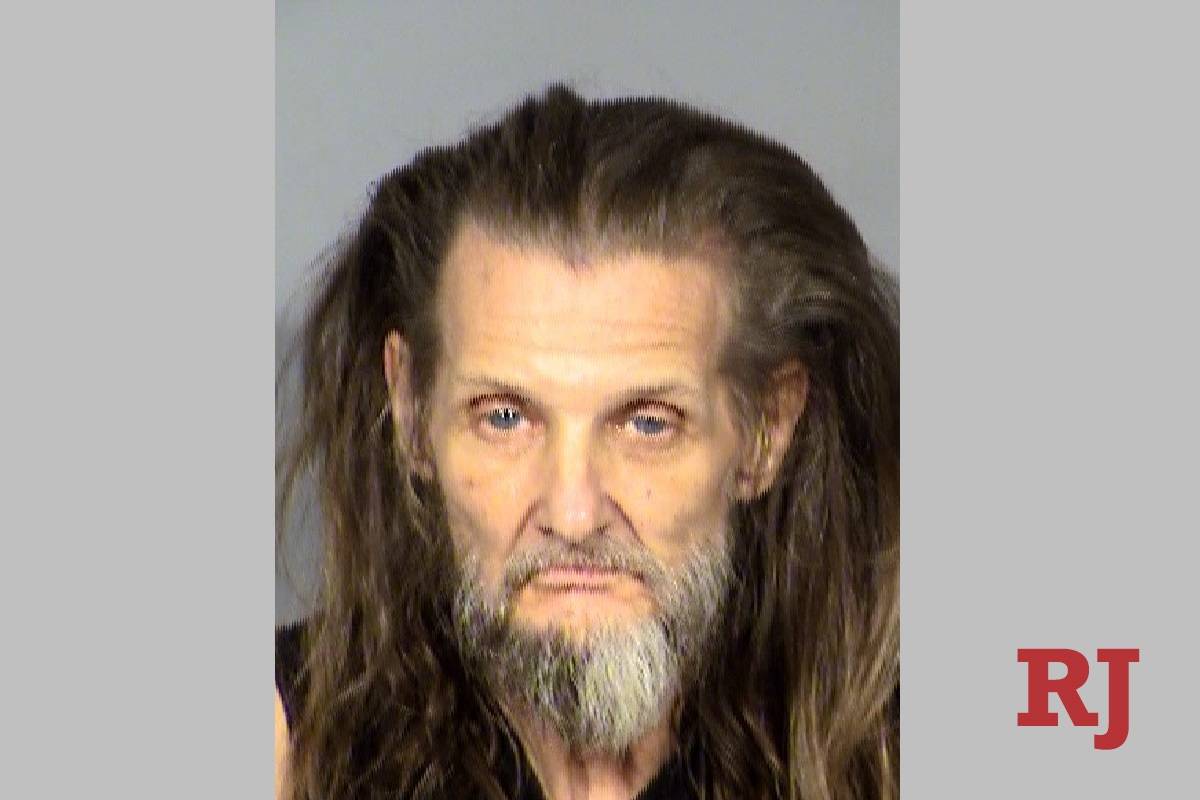 Nevada Highway Patrol trooper Micah May died at a hospital after he was struck by a stolen vehicle this week, the agency said Thursday night.

May, 46, was struck Tuesday while attempting to deploy “stop sticks” intended to puncture the vehicle’s tires on Interstate 15 near Sahara Avenue, according to the Highway Patrol. May was airlifted to University Medical Center in critical condition, where he remained until his death Thursday.

The driver was identified Thursday morning by the Clark County coroner’s office as Douglas Claiborne, 60.

Claiborne stole a car and led authorities on a chase through North Las Vegas and onto the freeway. After the stolen vehicle hit May, troopers managed to stop it, and Claiborne was shot by law enforcement and died at the scene.

The coroner’s office said he died of gunshot wounds to the head and torso. The manner of death was homicide.

According to data maintained by the FBI, May is only the second Nevada trooper to die in the line of duty in nearly three decades.

On March 27, 2020, Sgt. Ben Jenkins was fatally shot on U.S. Highway 93 after Jenkins pulled over to assist a driver. Ruth resident John Dabritz is charged with murder, third-degree arson, grand larceny of a motor vehicle and grand larceny of a firearm in connection with the death.

A history of assault, battery

Claiborne had previously been charged with one count of battery in Las Vegas Justice Court, records show. A Metropolitan Police Department arrest report in the case said Claiborne spit on an officer inside The Venetian on March 10, 2020, a day before the World Health Organization declared the COVID-19 outbreak a global pandemic.

The charge was dropped in June 2020, according to court documents.

Claiborne had a Hawaii driver’s license when he was detained by Metro last year.

His criminal history in Hawaii extends to at least 2002, when he was sentenced to 30 days in jail on a misdemeanor battery charge.

In 2004, Claiborne was charged with felony assault and assault of an officer; making a terror threat; possession of drugs of a prominent danger; and possession of drug paraphernalia. He pleaded guilty to all except assaulting an officer, a charge that prosecutors did not pursue, court records indicate. He was sentenced to five years in jail and five years of probation.

Honolulu attorney Victor Bakke represented Claiborne off and on for 15 years. He said Claiborne was a native of Iowa who went back and forth between Nevada and Hawaii in recent years.

“Very eccentric and compassionate, big-hearted, but he had a pretty much lifelong addiction problem with methamphetamine,” Bakke said. “He struggled with it for years. He could keep clean and sober for long periods, and then when he relapsed, it would be a very heavy relapse.”

Bakke said all of Claiborne’s encounters with the criminal justice system were drug-related. Claiborne lost all of his teeth due to his addiction.

The attorney said prior to May’s death that Claiborne’s family is heartbroken over May’s injuries.

“Although they are saddened by their loss, it pales in comparison to the fact that this innocent trooper was hurt,” Bakke said. “They feel absolutely horrible about it. Everyone is praying for that officer.”

Metro is investigating the law enforcement shooting that unfolded at the scene, the Highway Patrol has said. Metro clarified in a statement that no Las Vegas police officers discharged their firearms in the shooting.

“With heavy hearts, we confirm the loss of … Trooper Micah May #6203,” the Highway Patrol tweeted.

With heavy hearts, we confirm the loss of @NHPSouthernComm Trooper Micah May #6203. He was struck while deploying stop-sticks on I-15 attempting to apprehend an armed carjacking suspect. The suspect’s vehicle struck Trooper May, who suffered life-threatening injuries. pic.twitter.com/f54aHOZFaY

In a tweet, the FBI in Las Vegas said it sends the “deepest sympathy to the family, friends and co-workers” of May.

@FBILasVegas sends our deepest sympathy to the family, friends and co-workers of @NHPSouthernComm Trooper Micah May #6203https://t.co/rgHCd3L83l

Our deepest condolences and sympathy to our brothers & sisters in silver & blue at @NHPSouthernComm and the May family on the loss of Trooper Micah May in the line of duty. From all of us at @LasVegasFD . Rest in peace. https://t.co/1klUPKTeYr

“Trooper May gave his life in service to the residents and visitors of Clark County and this state,” Kirkpatrick wrote. “His premature death is a tragic loss for his family and friends, his colleagues, and all of us who appreciate the important public safety work of the Nevada Highway Patrol.”

The Highway Patrol said May had served for 13 years and had received awards for his work to stop impaired drivers on Nevada highways. He is survived by his wife and two children.

“Trooper May’s heroism exemplified the definition of a silent guardian. His dedication and service will never be forgotten,” Nevada Department of Public Safety Director George Togliatti said in a statement. “Our hearts go out to this grieving family and recognize the unique sacrifice to the State of Nevada. My thoughts and prayers are with his loved ones.”

The Review-Journal is owned by the family of Dr. Miriam Adelson, the majority shareholder of Las Vegas Sands Corp., which operates The Venetian/Palazzo/Sands Expo & Convention Center.