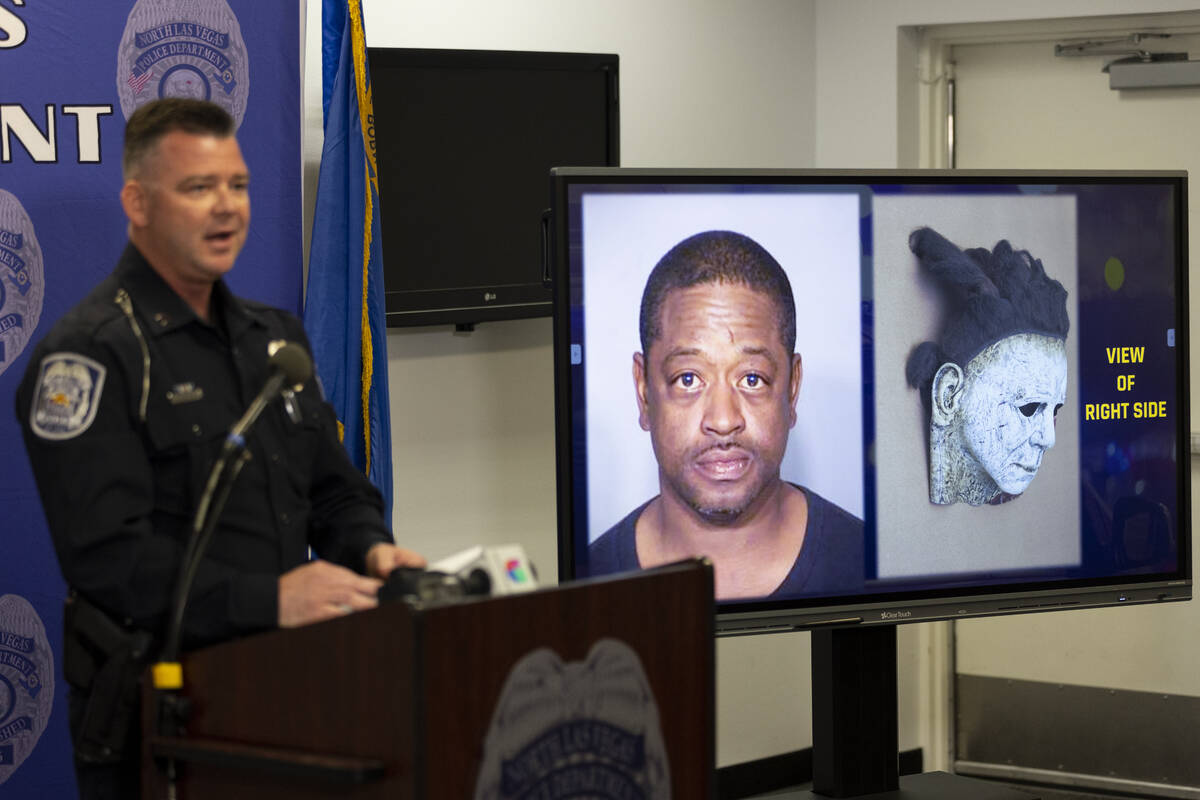 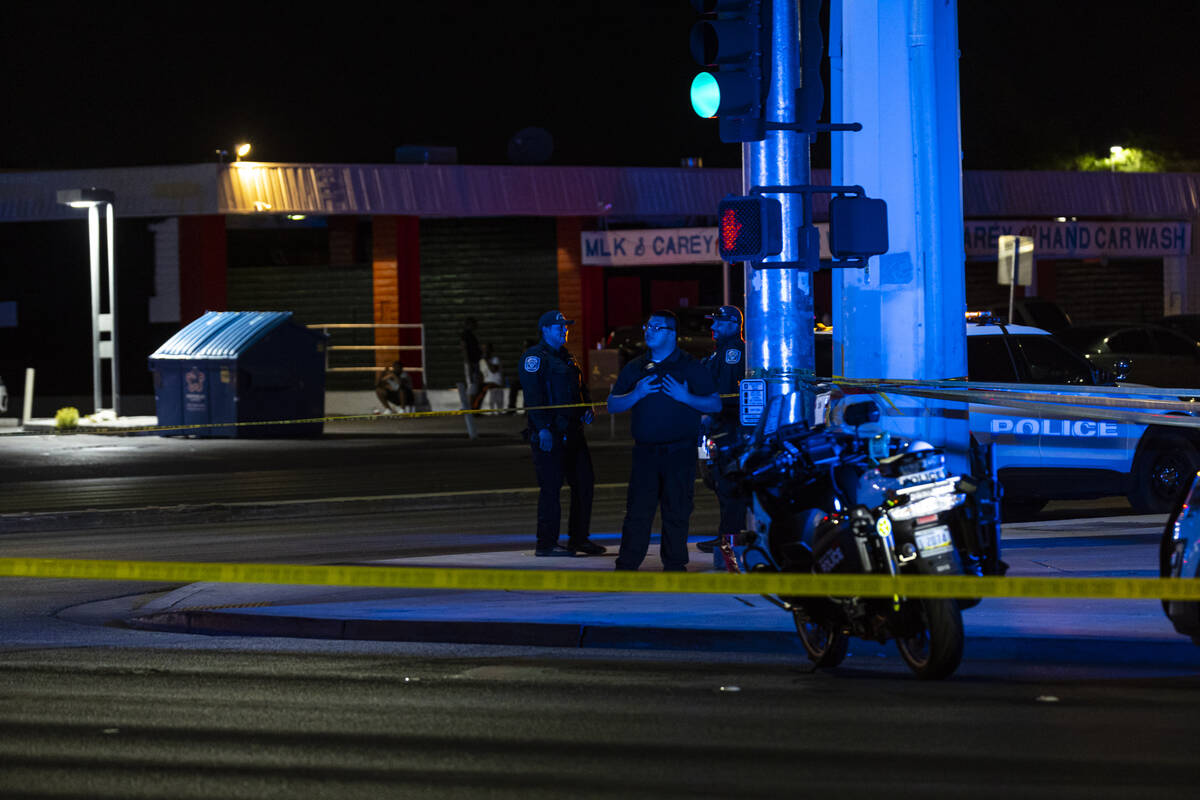 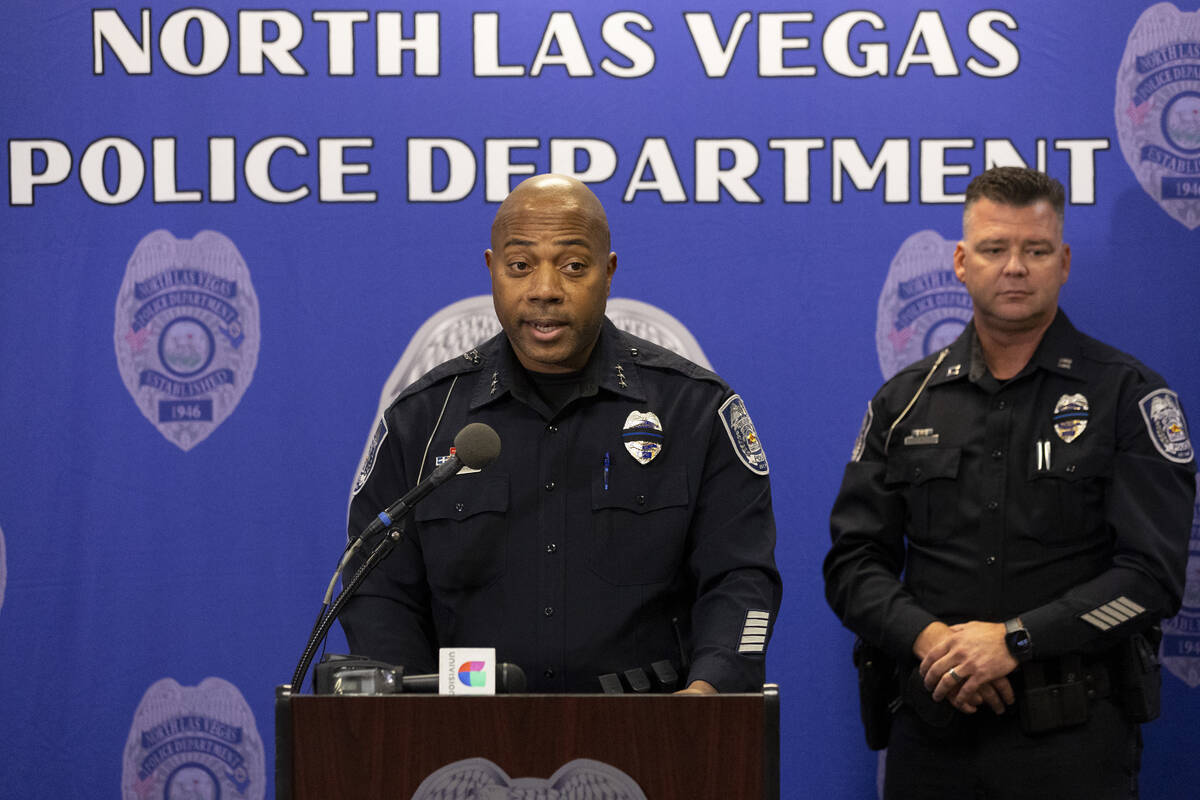 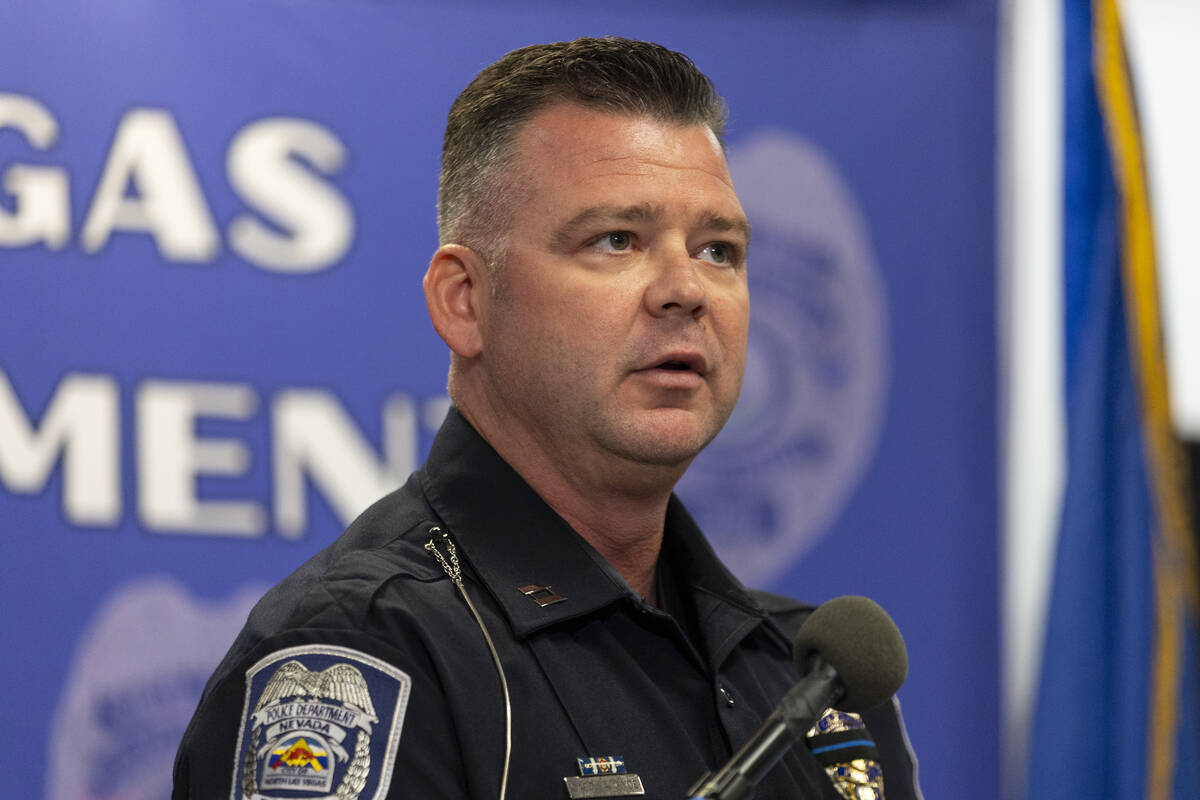 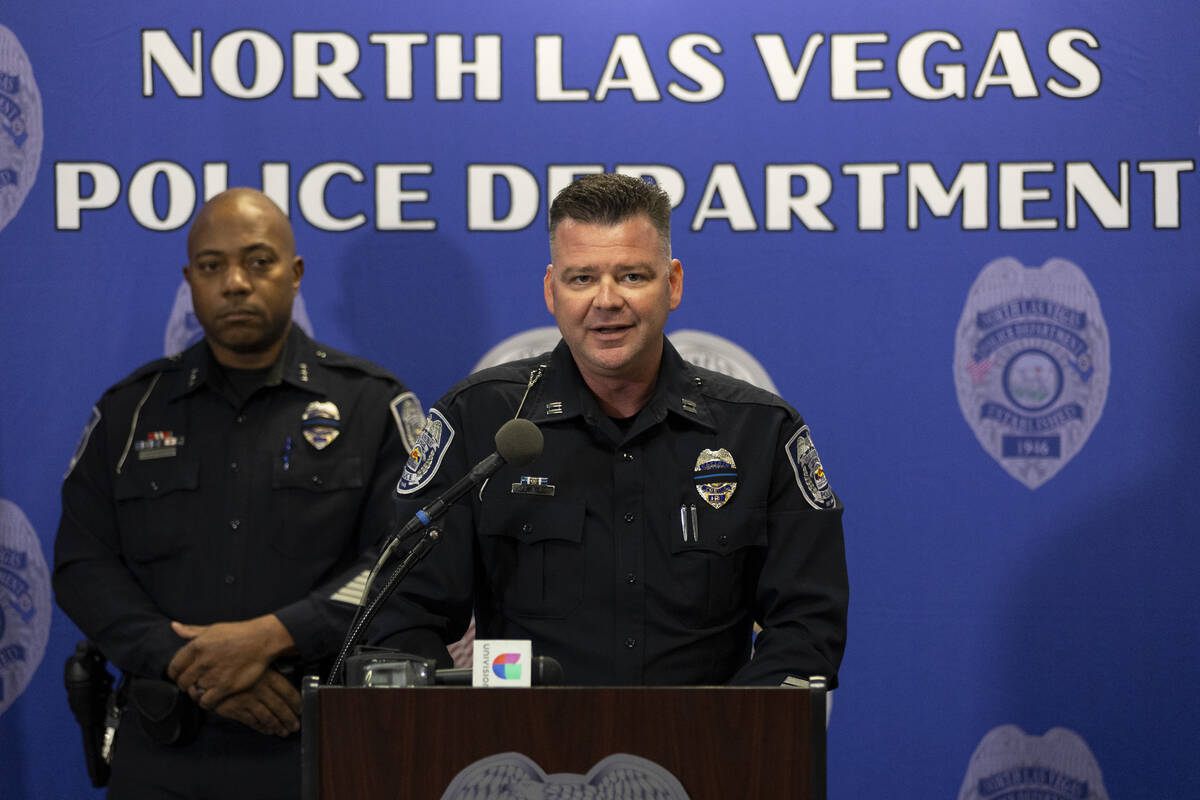 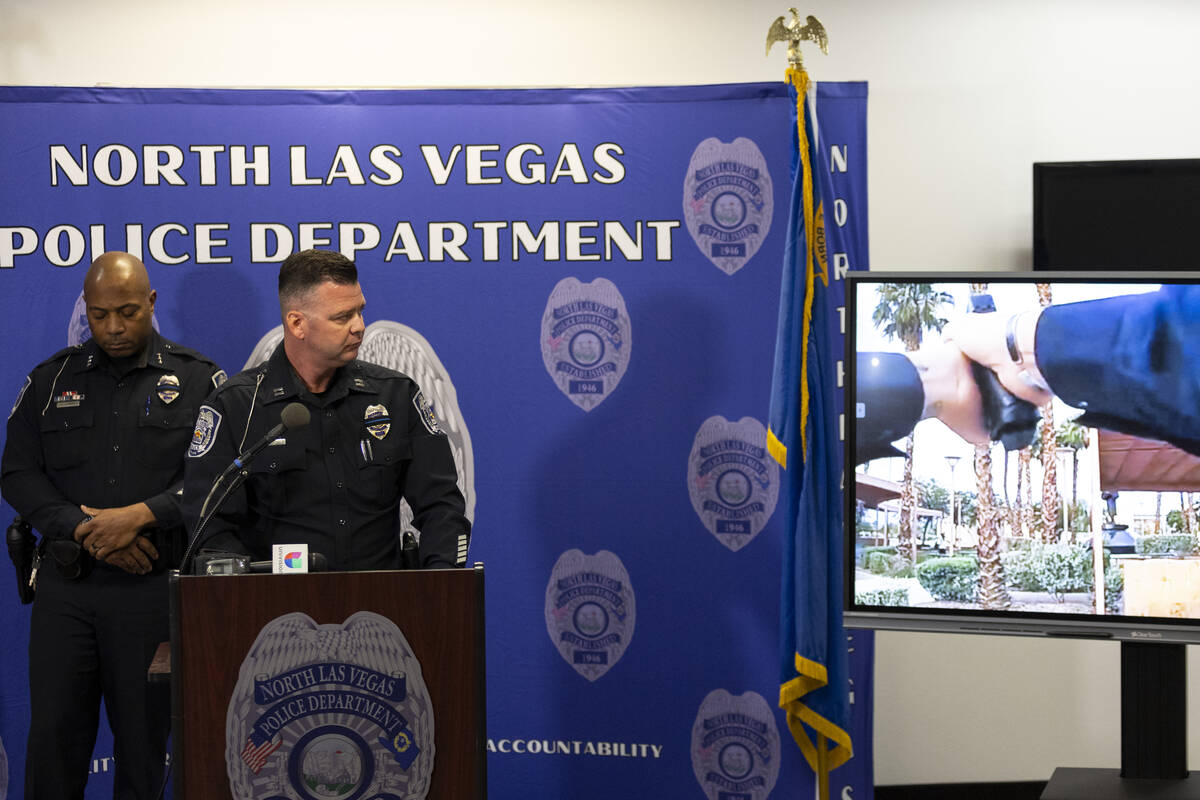 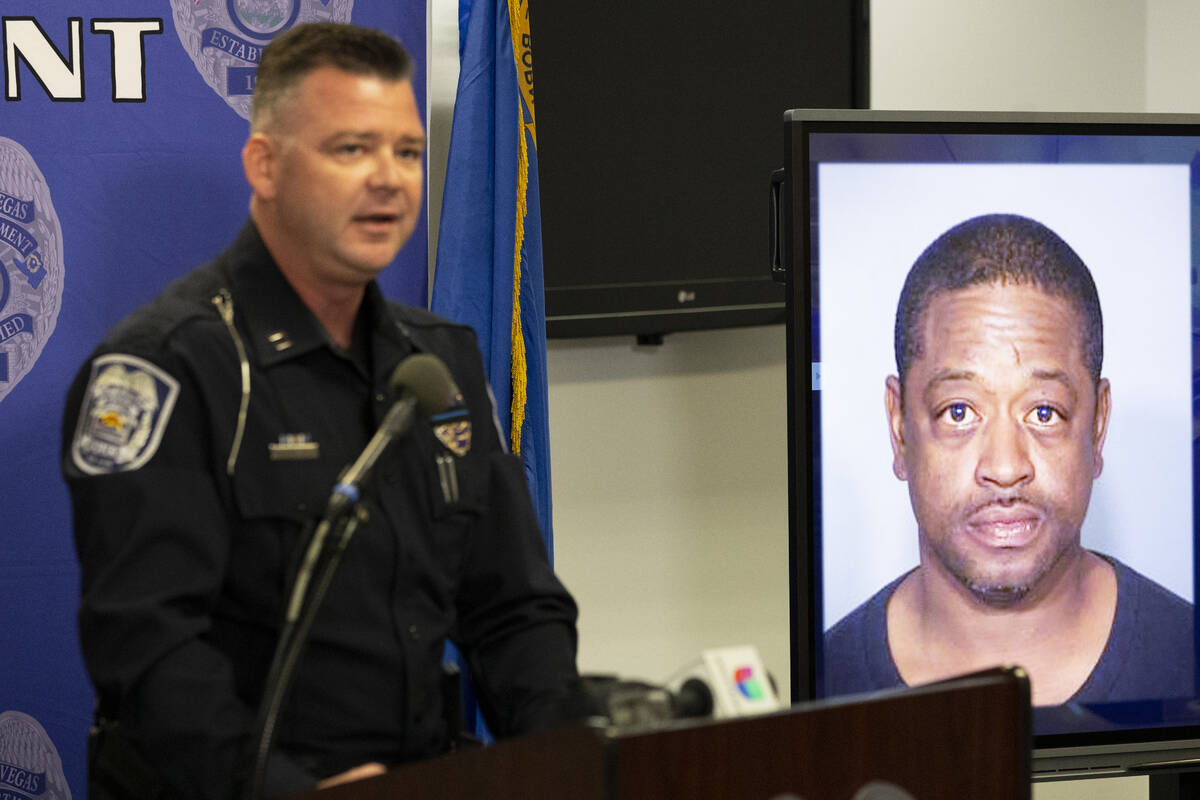 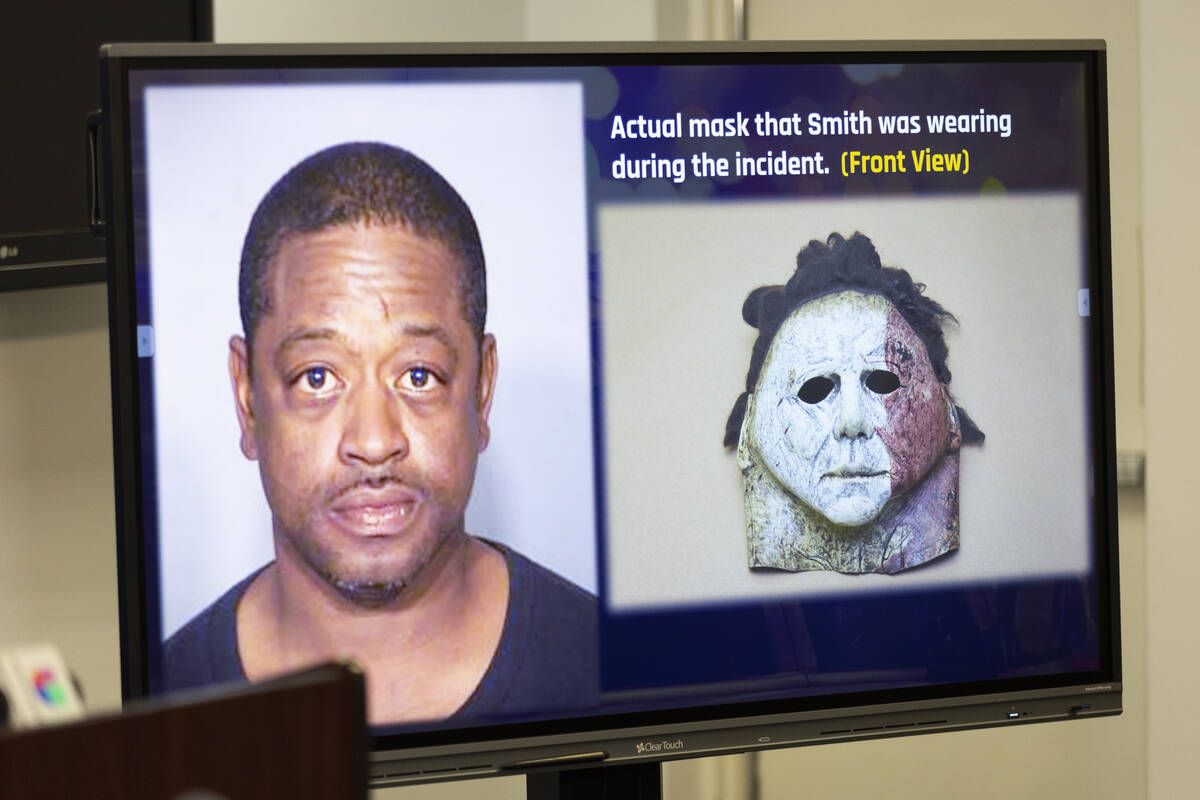 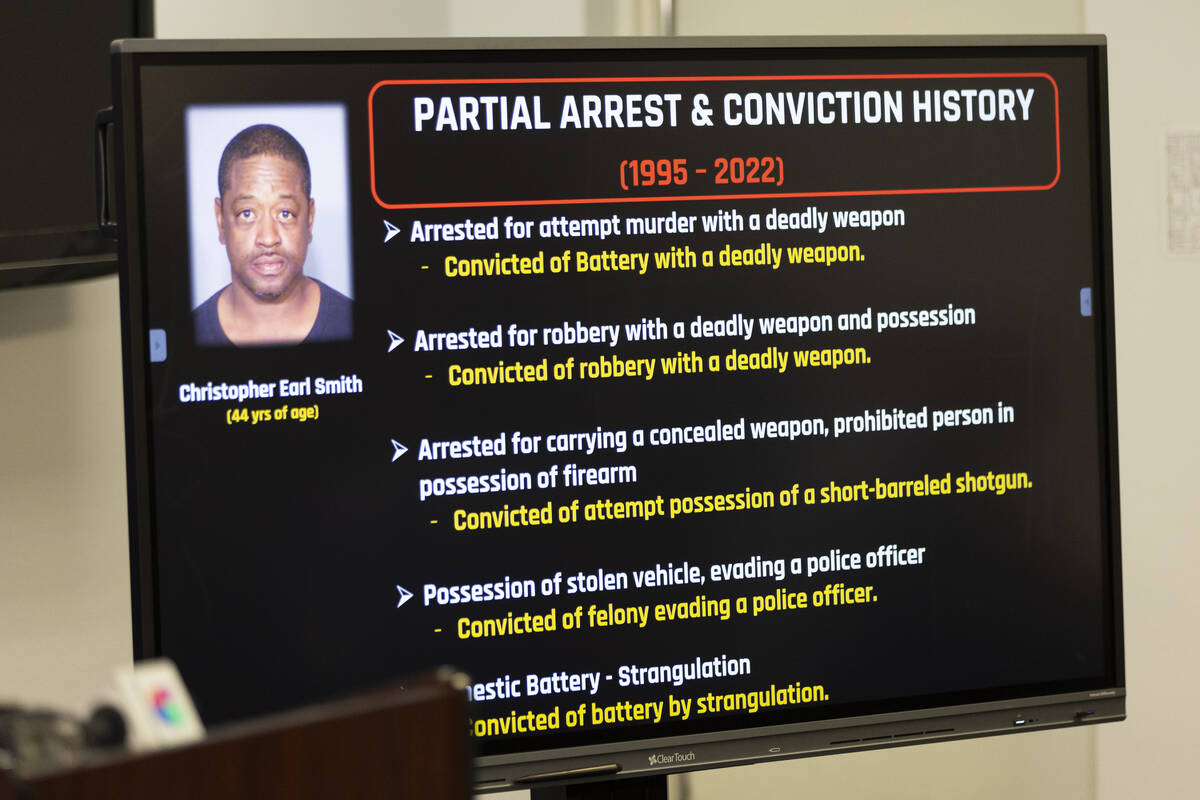 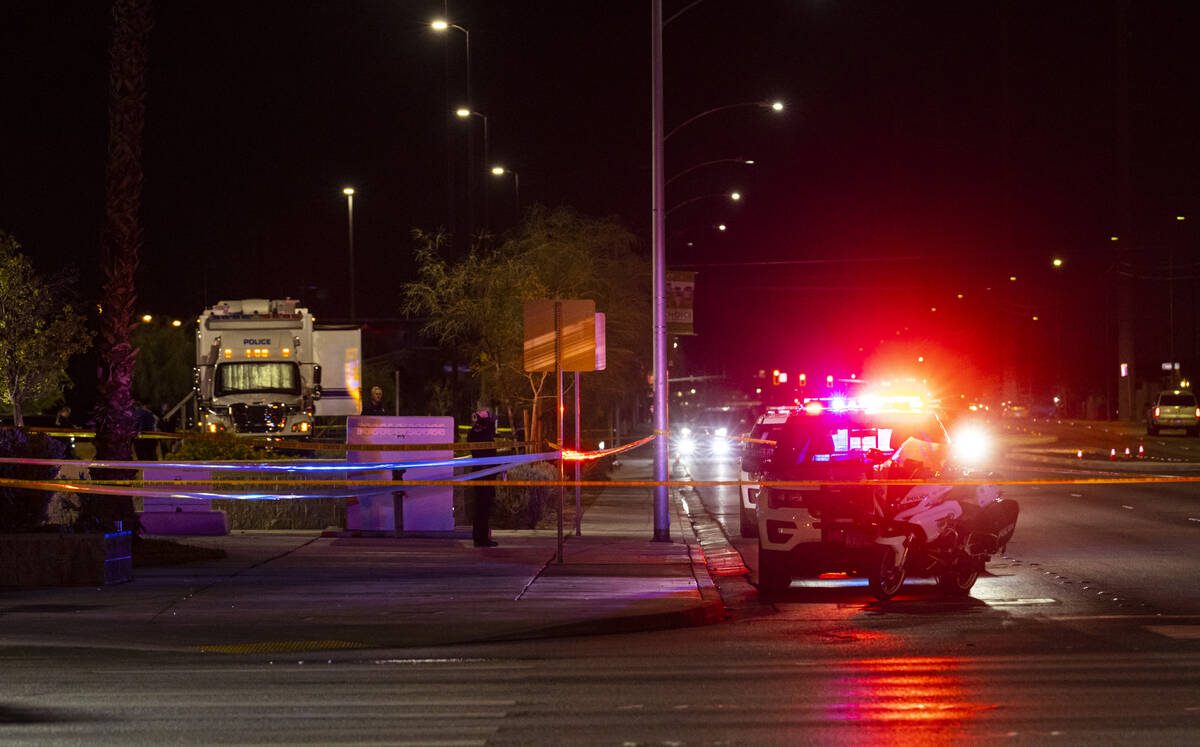 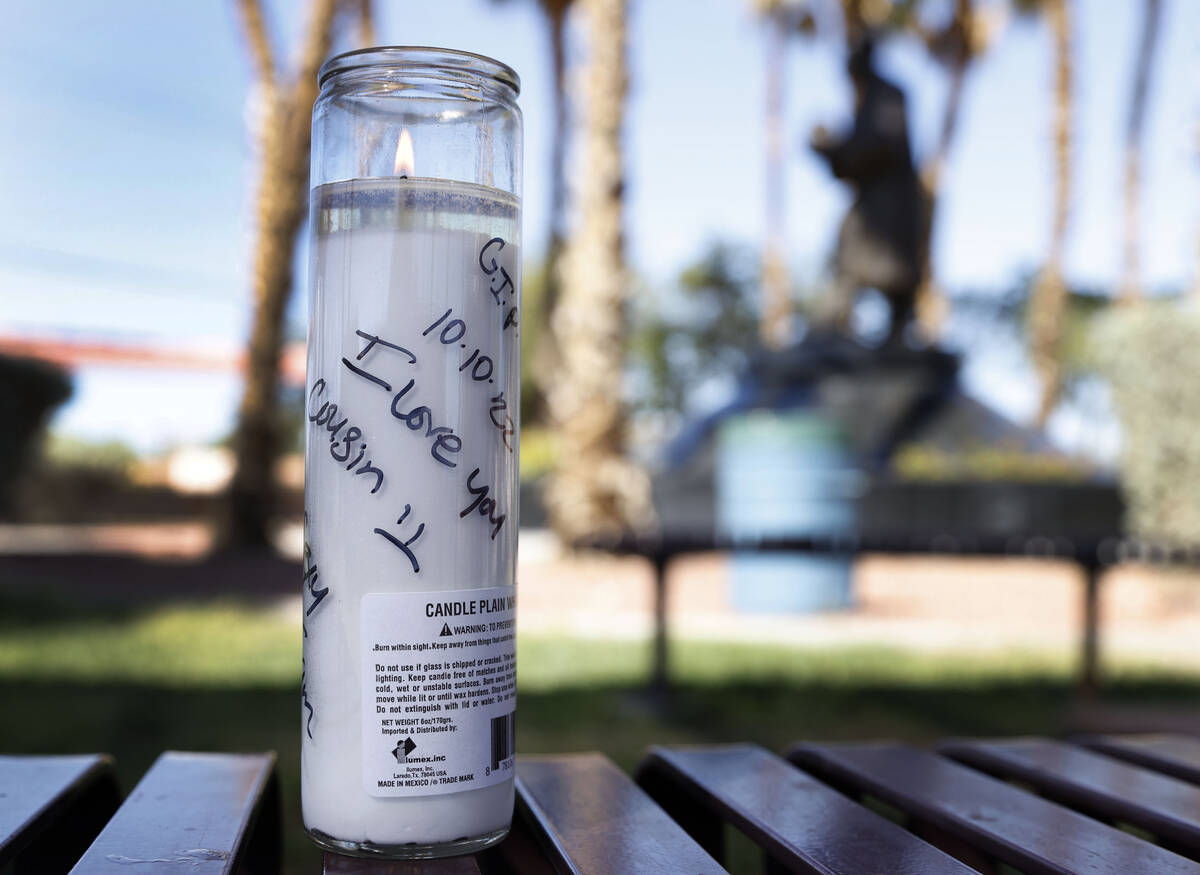 A candle with "I Love You Cousin" message is placed on Wednesday, Oct. 5, 2022, where police fatally shot a man near the Martin Luther King, Jr. statue at the intersection of MLK Boulevard and Carey Avenue on Monday night, in North Las Vegas. (Bizuayehu Tesfaye Las Vegas Review-Journal) @btesfaye

North Las Vegas police on Thursday released more information from the fatal police shooting of a man by the Martin Luther King Jr. statue on Monday, including harrowing bodycam footage and photographs of the gun police say the man had on him.

The body camera footage shows officer Anthony Malear approaching a man later identified as Christopher Smith, 44, who was wearing a Michael Myers-style Halloween mask and carrying a handgun in the small park on the northeast corner of Martin Luther King Jr. Boulevard and West Carey Avenue.

The man continued walking. He began to pull a black object from his waistband that police said was a gun. Malear continued shouting orders at the man, growing increasingly louder.

“Stop reaching! Don’t reach!” Malear shouted. He then fired eight shots from his department-issued Glock 17 9 mm handgun. The bodycam footage shows Smith falling to the ground near a park bench, his arms outstretched under the bench.

“Don’t reach!” Malear shouted as Smith lay on the ground. “Do not reach!”

North Las Vegas police Capt. Adam Hyde, who described the events that led up to the shooting in a news briefing Thursday, said Smith had been armed with a black Luger 9 mm handgun that officers found near Smith after the shooting.

“Smith was armed with one black 9 mm Ruger that was later determined to be stolen,” Hyde said.

Hyde highlighted Malear’s interaction with Smith as being proof that Malear gave Smith ample warning to not try to do anything that might endanger himself, the officer or anybody else in the park.

By this point, at 5:40 p.m., police had received multiple calls from two different callers about Smith pulling out his gun, even robbing a man, at various locations around the intersection of Martin Luther King and Carey.

Hyde said the series of events that would end with the fatal shooting began at 5:06 p.m., when 911 dispatchers got a call from a man outside the North Las Vegas Justice Center, near the park with the Martin Luther King Jr. statue. The man told police that another man later identified as Smith robbed him at gunpoint.

The call dropped abruptly. When the dispatcher called back, there was no answer. Police were dispatched to the area, but there was no sign of the caller or the suspected robber.

The same caller then called dispatchers at 5:35 p.m. to say the man who had robbed him was at the car wash across the street from the park. The dispatcher asked the caller why he had suddenly hung up in the first call.

“Well, I’m sorry, I had to get away. I didn’t want to get shot,” the caller said. “I was trying to get out of the way ma’am. Please understand that.”

Four minutes later, another caller called from the nearby Carey Mini Mart to say that the same man had pulled a gun on customers. He was then seen crossing Martin Luther King Jr. Boulevard toward the park.

“I work at the Carey Mini Mart,” the caller said. “We have a guy out there that has a gun and he’s pulled it on a couple customers. He’s kind of wacko.”

At 5:40 p.m., Malear pulled up and approached Smith, their interaction culminating with the fatal shooting.

Hyde said during the news briefing that had Smith survived, he would have faced several charges including robbery with a deadly weapon, with an enhancement due to the victim being older than 60, attempted grand larceny, possession of a stolen firearm, prohibited person in possession of a firearm, grand larceny firearm, carrying a concealed weapon, and assault with a deadly weapon on a protected person.

The results from a pre-screen urinalysis also showed that Smith had alcohol, THC and oxycodone in his system, Hyde said.

It was the second time a North Las Vegas police officer has fatally shot a man since Sept. 24, when Sgt. Paul Sanderson fatally shot Darin Dyer, 38, who was carrying an AR-15 in his own backyard.

At the North Las Vegas briefing on Thursday, officers also expressed condolences to the family and friends of Metropolitan Police Department officer Truong Thai, 49, who was shot and killed early Thursday near UNLV.

At the North Las Vegas shooting scene on Thursday, dozens of candles sat at the spot where Smith died, many of them green. Smith’s sister Latavia Porter had said at the shooting scene on Monday that Smith was a huge fan of both the Green Bay Packers and Boston Celtics.

“He was very loved,” said Porter, 36, who said she was numb and heartbroken.