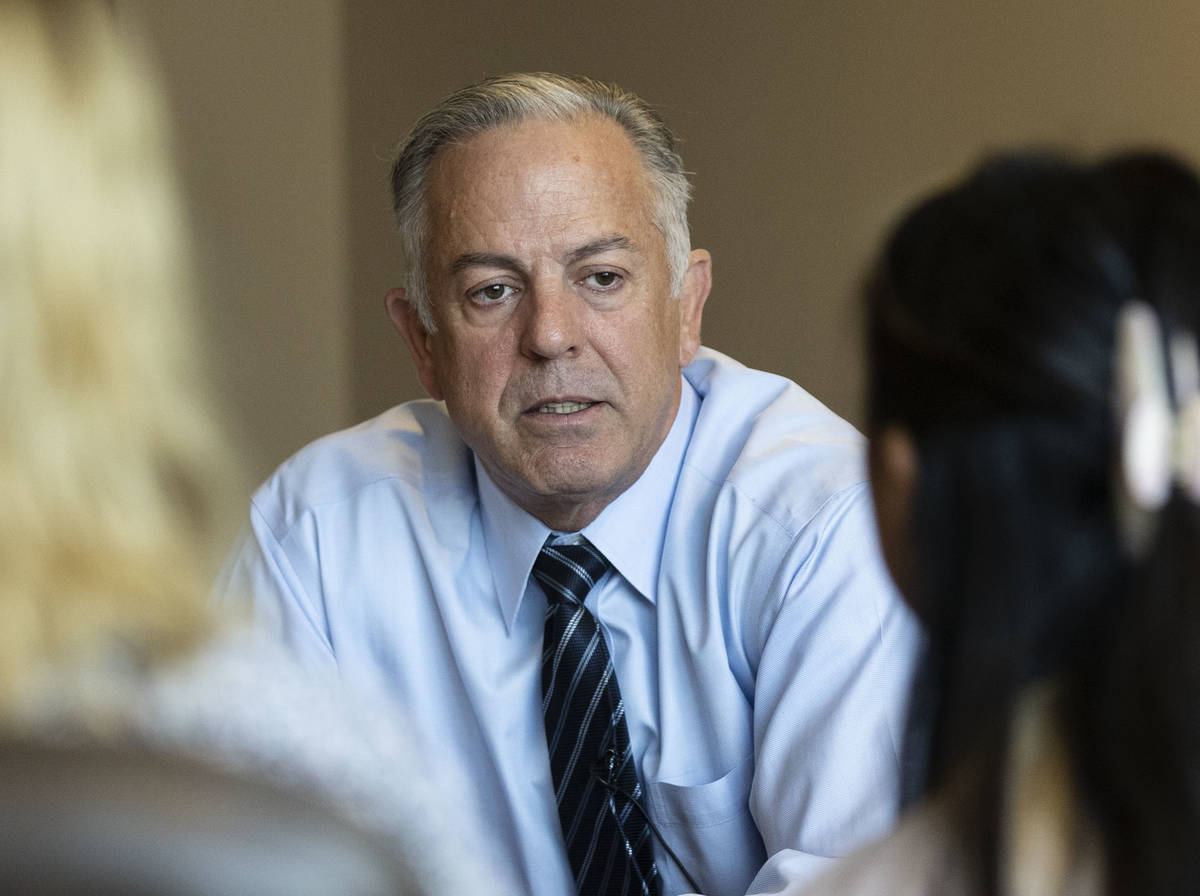 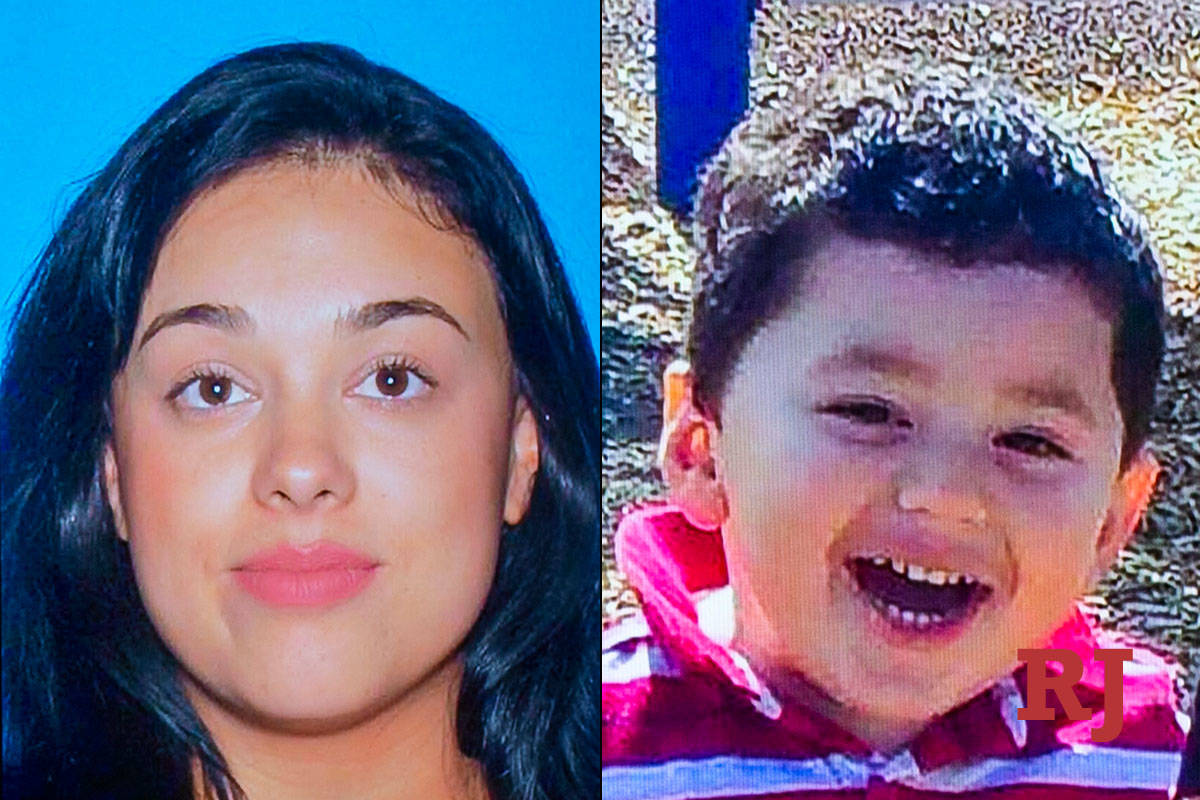 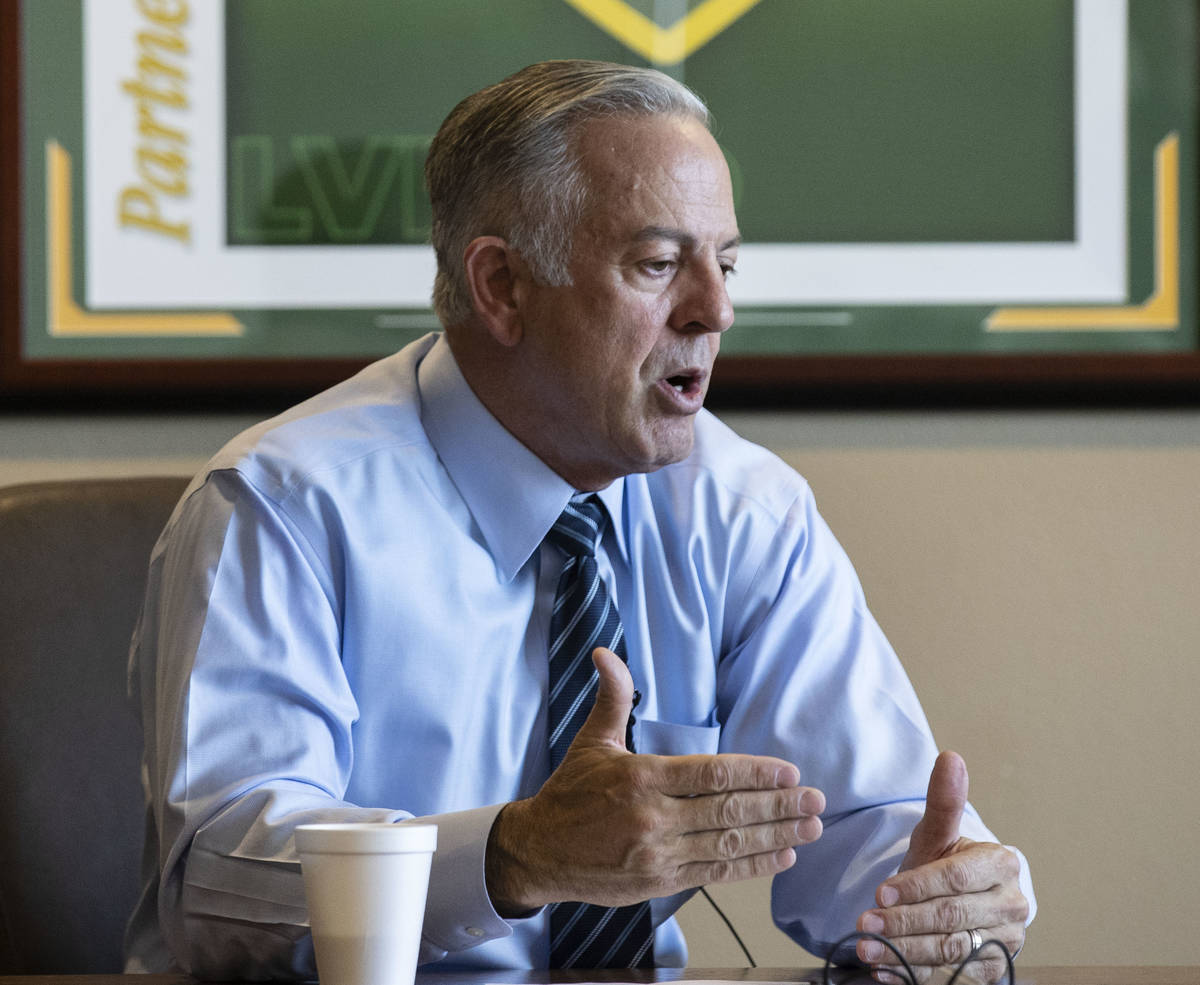 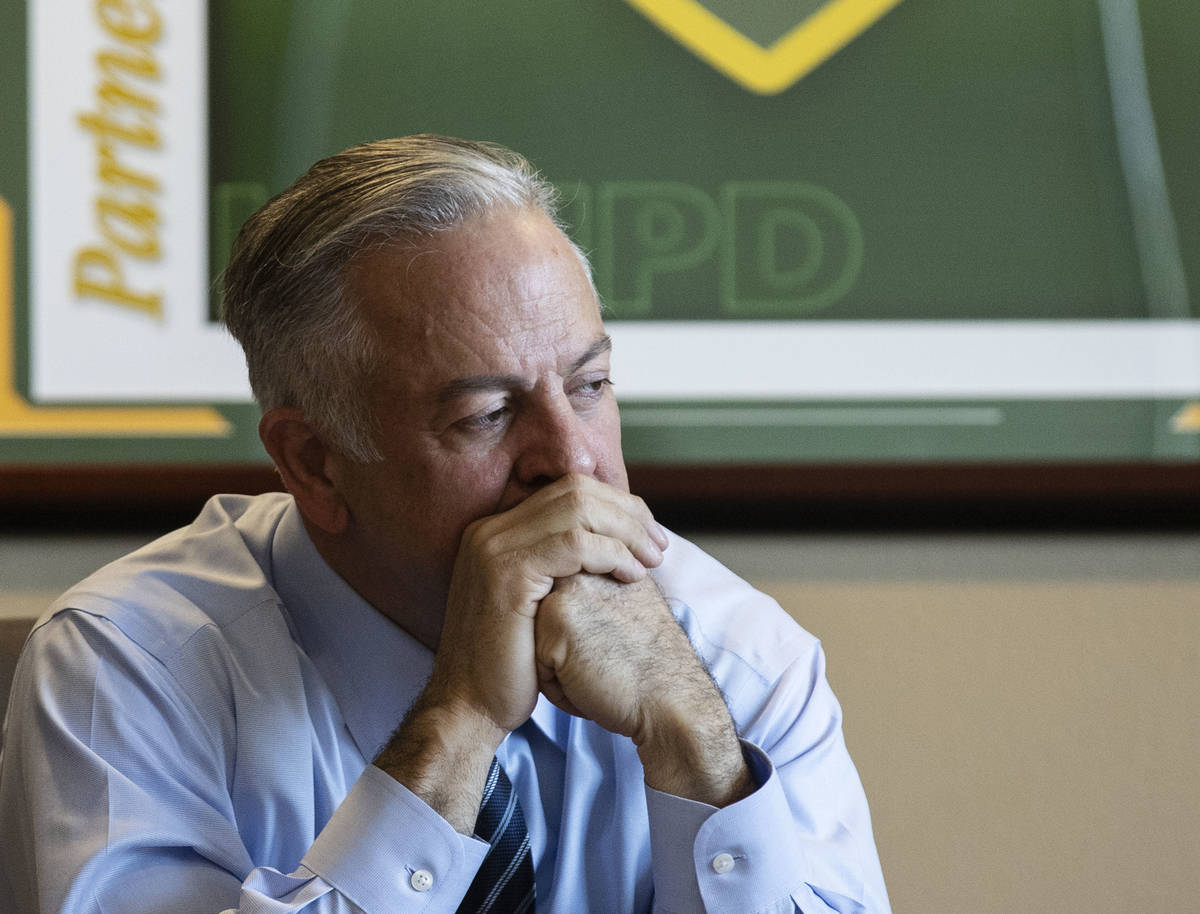 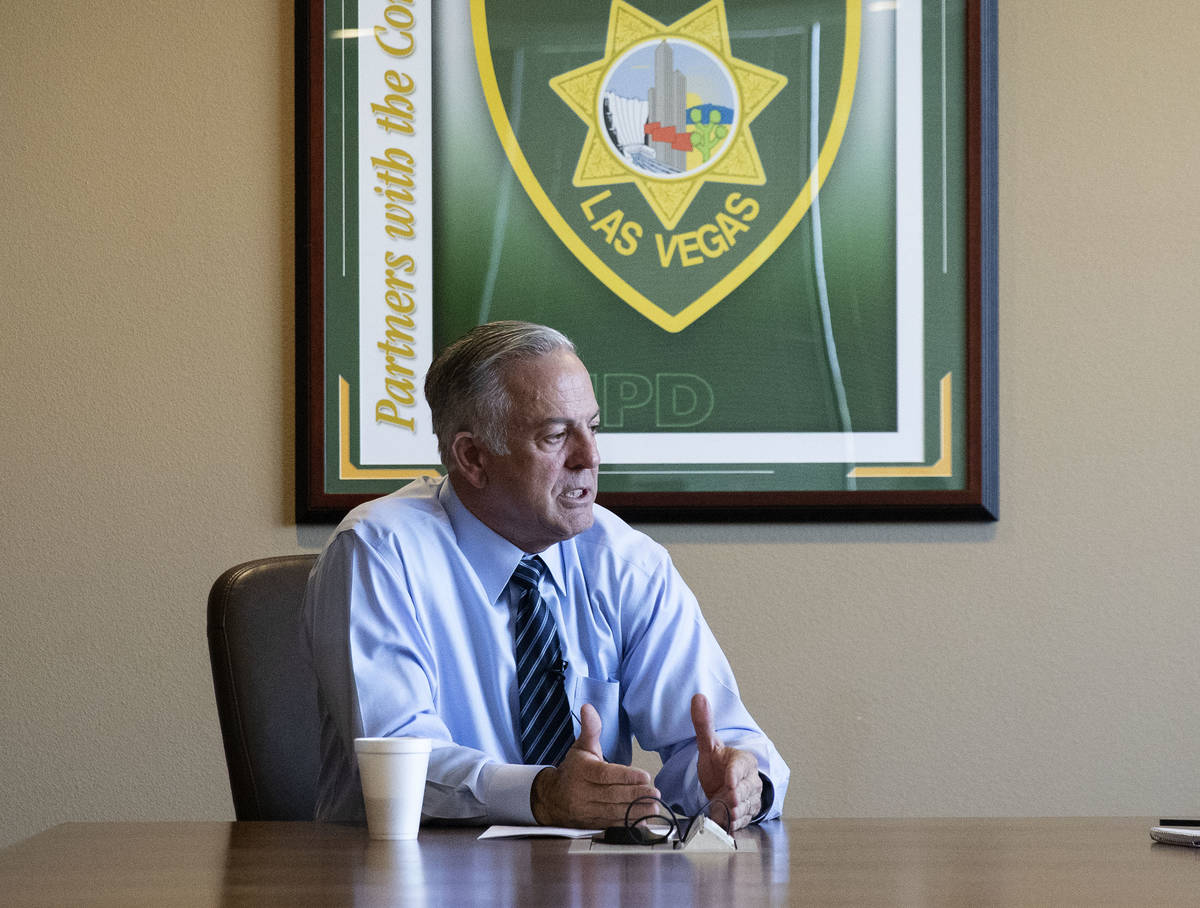 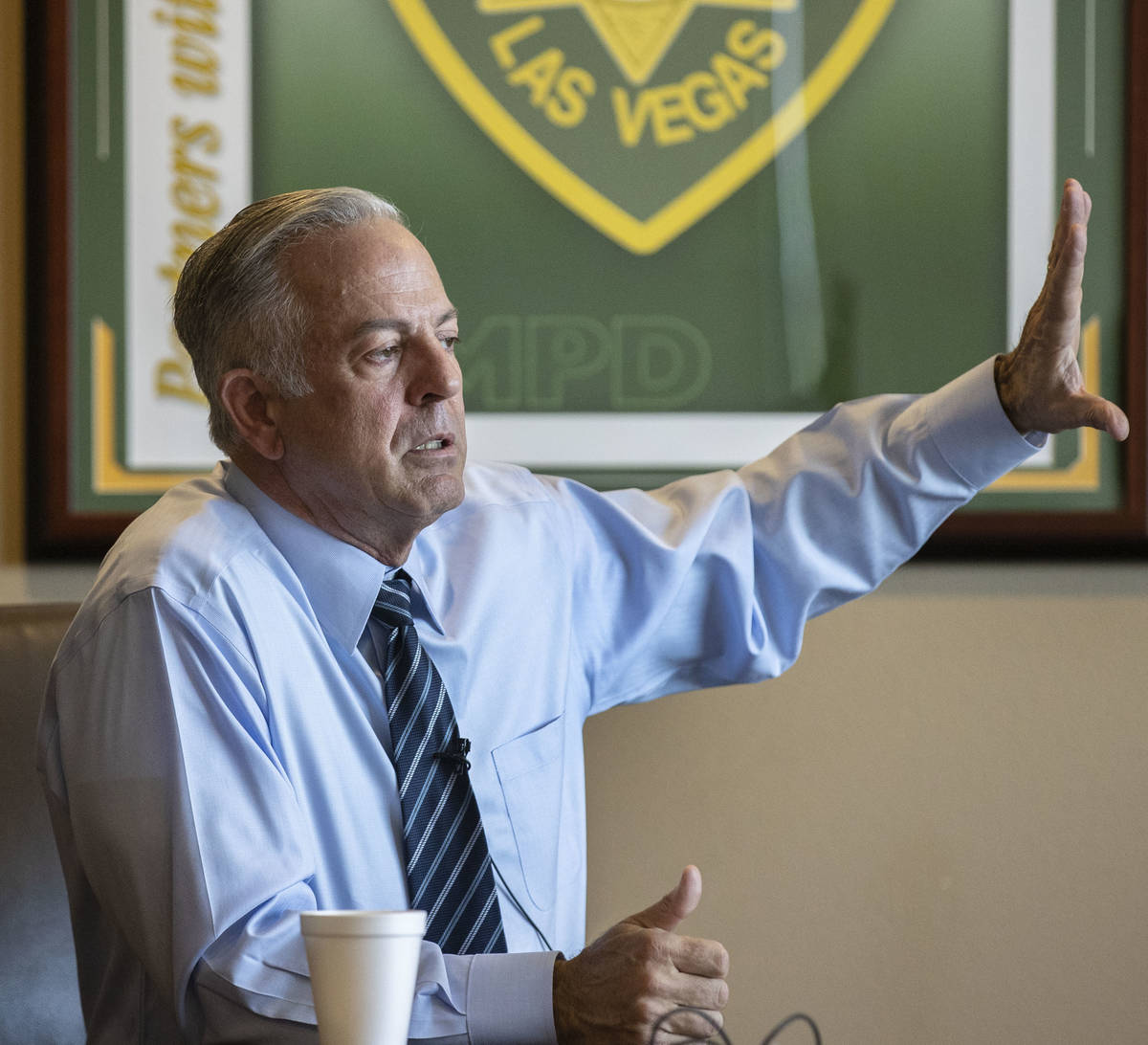 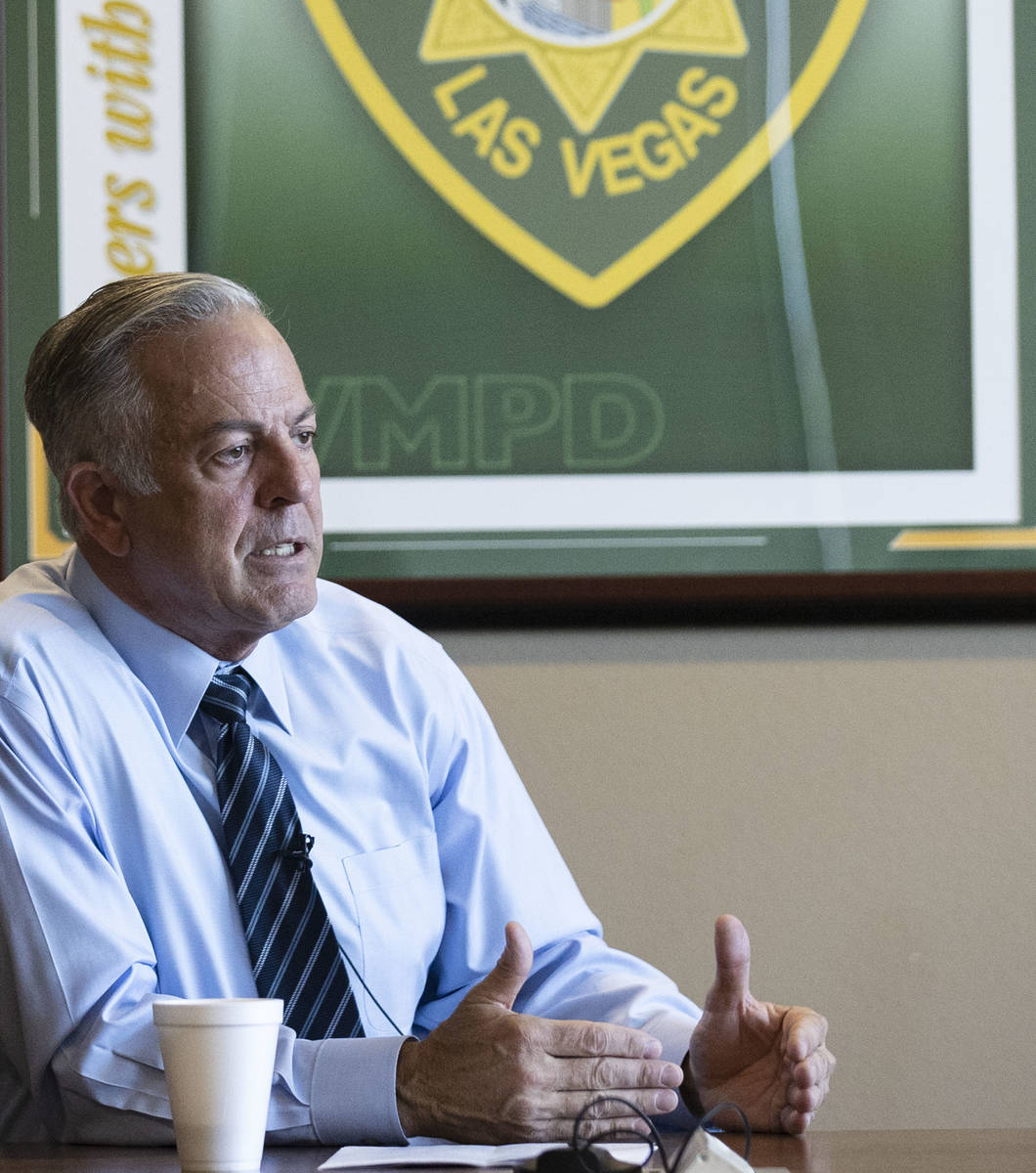 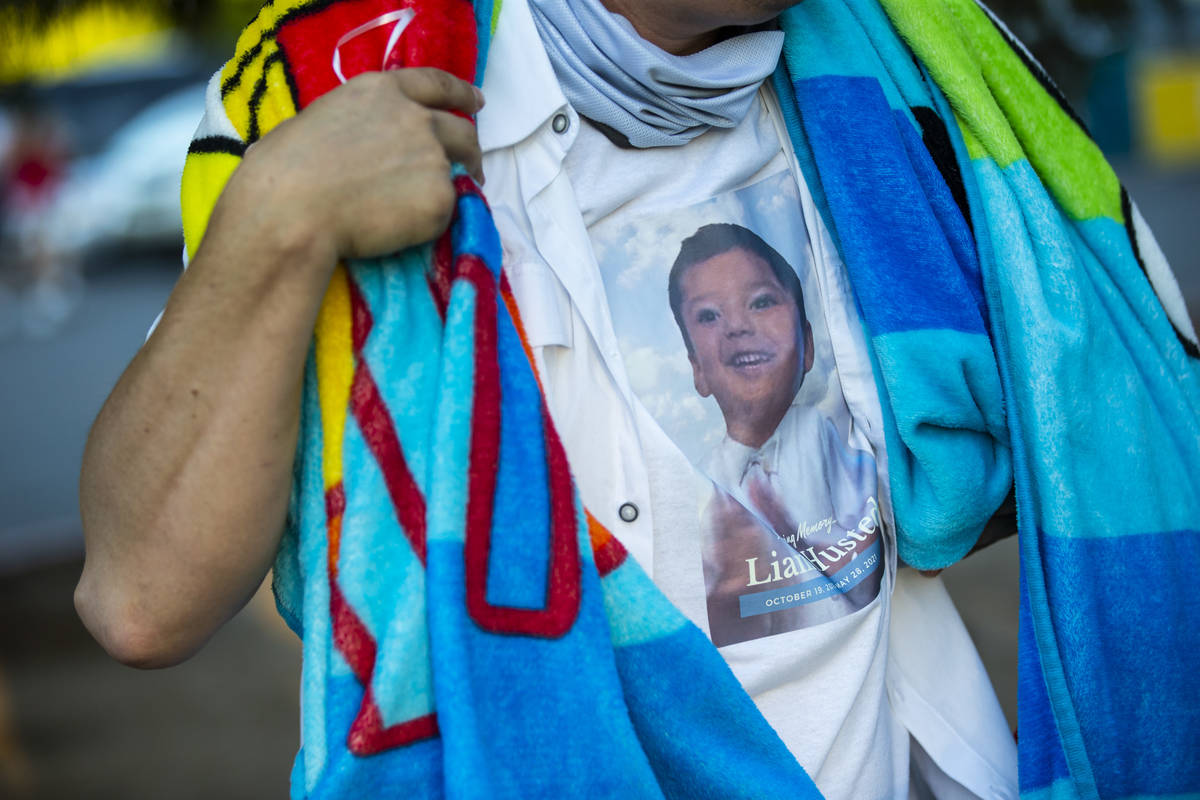 Nicholas Husted, of San Jose, California, whose son, Liam Husted, was found slain near Mountain Springs on May 28, shows his shirt with a picture of his son during a vigil in Liam's memory at Sunset Park in Las Vegas on Sunday, June 13, 2021. (Chase Stevens/Las Vegas Review-Journal) @csstevensphoto 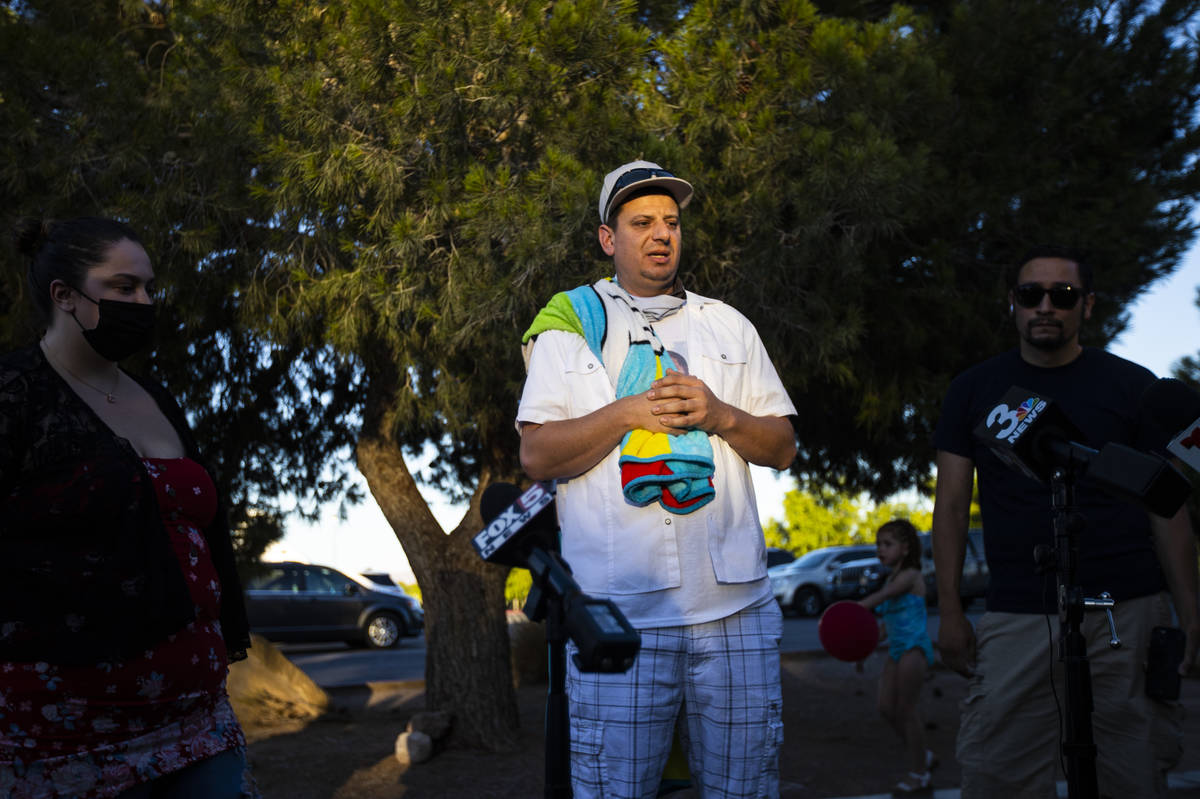 Nicholas Husted, of San Jose, whose son, Liam Husted, was found slain near Mountain Springs on May 28, speaks during a vigil in Liam’s memory at Sunset Park in Las Vegas on Sunday, June 13, 2021. (Chase Stevens/Las Vegas Review-Journal) @csstevensphoto 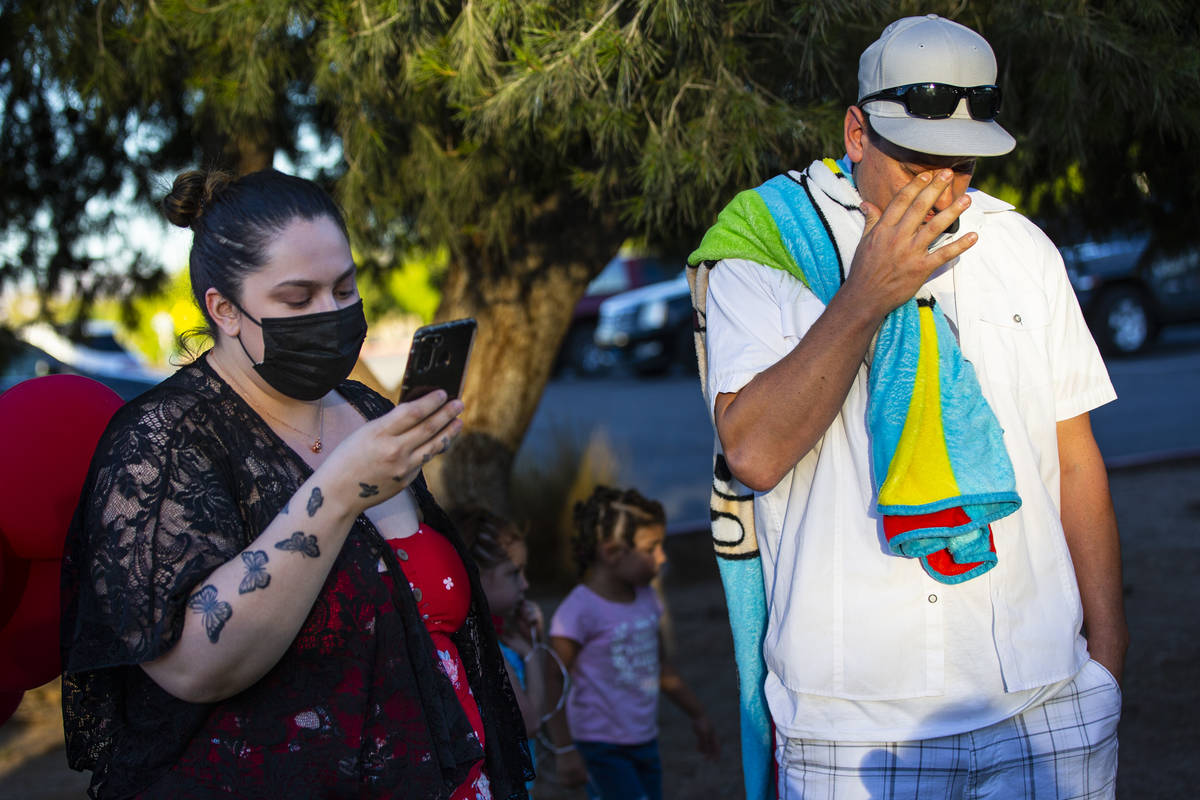 Vanessa Browning, left, reads a statement alongside Nicholas Husted, of San Jose, California, whose son, Liam Husted, was found slain near Mountain Springs on May 28, during a vigil in Liam's memory at Sunset Park in Las Vegas on Sunday, June 13, 2021. (Chase Stevens/Las Vegas Review-Journal) @csstevensphoto 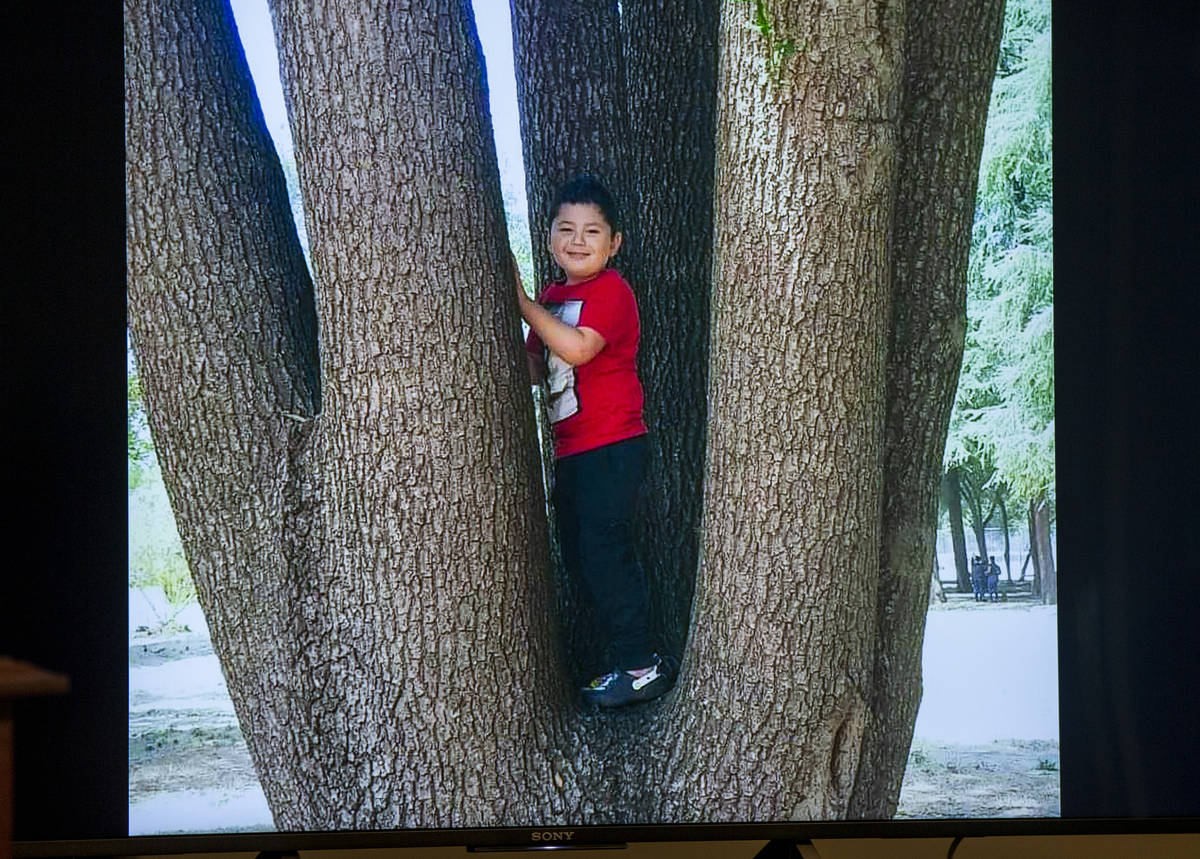 Clark County Sheriff Joe Lombardo discussed the death of 7-year-old Liam Husted on Wednesday, one day before a scheduled court appearance for the boy’s mother in Colorado.

Liam’s naked body was found on the morning May 28 near a hiking trail in Mountain Springs, off of state Route 160 between Las Vegas and Pahrump, according to Las Vegas Justice Court documents.

The boy’s mother, 35-year-old Samantha Moreno Rodriguez of San Jose, California, has been charged with murder. Police have accused Rodriguez of taking Liam from the home she shared with his father, driving to Las Vegas and killing him in Mountain Springs before fleeing to Colorado.

Rodriguez was arrested June 8 in Denver, one day after police identified Liam’s body.

“Now we go through the extradition issues associated with getting her from Colorado to here,” Lombardo told the Las Vegas Review-Journal on Wednesday.

He said he does not expect the process to take long.

Rodriguez is scheduled to appear in Denver District Court on Thursday morning, according to online court records. She is being held in Colorado on an arrest warrant but has been charged with murder in Las Vegas Justice Court.

Detectives flew to Denver and spoke with Rodriguez the day she was arrested, Metropolitan Police Department homicide Lt. Ray Spencer said, although officials have not released details about the interview.

“Just (from) my understanding and cursory talks with the investigators, she was in a difficult mental state,” Lombardo said Wednesday.

Liam’s body remained unidentified for more than a week, prompting a nationwide search by Metro and the FBI. Liam was found at a trailhead in an area with virtually no cameras, and police had to shift through nearly 500 tips, Lombardo said.

“In that case, in particular, it was frustrating that we were having difficulty developing a suspect,” the sheriff said.

The case was further complicated when, the day after the boy’s body was found, a woman mistakenly identified him as her own child.

That woman’s son later was found with his half-brother and father, who had taken the children camping in an area of central Utah without cell service.

The woman incorrectly identified the body after viewing photographs and speaking with homicide detectives and Clark County coroner’s office investigators. She was not able to see the boy’s body in person because the coroner’s office was evaluating him, and “because of the condition the body was in,” Lombardo said.

Investigators said they quickly released information about the woman’s son because they were worried about the well-being of the boy’s half-brother.

“I think it was handled appropriately,” Lombardo said. “We went through the identification process, which is a normal procedure. And the identifying marks that the mother conveyed to us were present on the child.”

Court documents released Tuesday did not say how Liam died, although police noted he had “multiple injuries.” The coroner’s office had not ruled on his cause and manner of death as of Wednesday afternoon, and is waiting on results from toxicology reports, officials said.

The breakthrough in the case came June 4, when a friend of Rodriguez’s contacted the San Jose Police Department after seeing an image of the then-unidentified boy. She told police he resembled Liam.

Days prior, Liam’s father, Nicholas Husted, had told San Jose police that Rodriguez had taken Liam from their home the week before, according to court documents.

Rodriguez left her cellphone at their home and had left Husted a voicemail saying, “I’m sorry. I had to do this,” police have said.

Spencer has said there was “nothing suspicious” in the voicemail, and that investigators do no consider Husted a suspect.

Rodriguez and her son checked into a Las Vegas hotel on May 27, the day before the boy’s body was found in Mountain Springs, police have said. It remains unclear why she then fled to Denver.