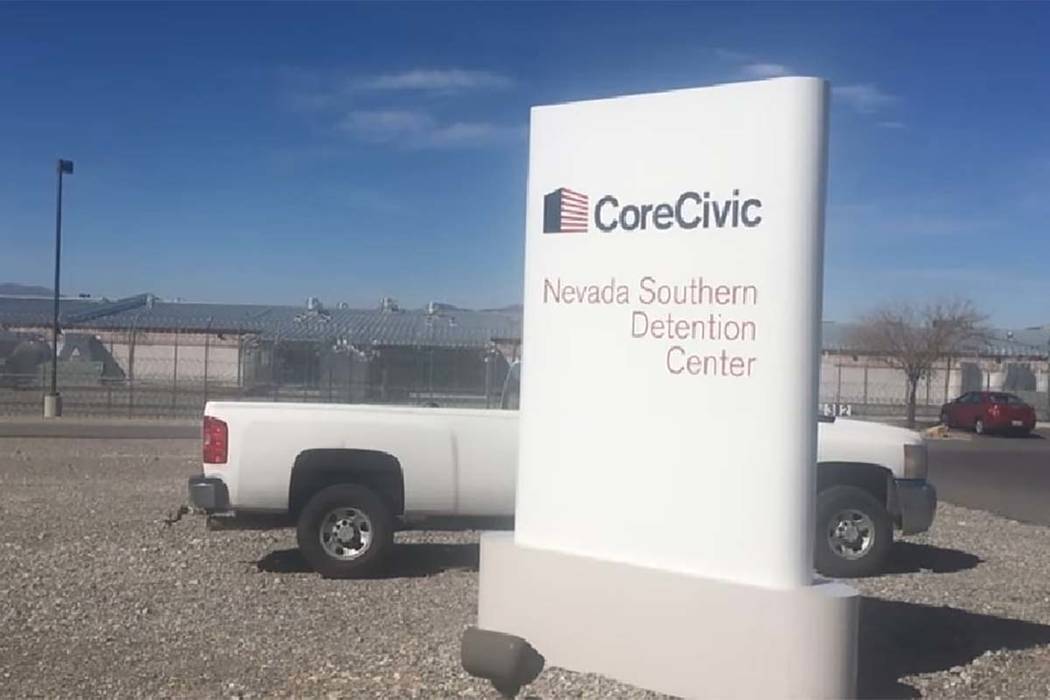 Federal and local officials are investigating the death of an inmate at the CoreCivic Nevada Southern Detention Center in Pahrump on Friday, July 12, 2019. (Nye County Sheriff's Office)

The inmate killed last week at a private Pahrump detention center was allegedly strangled to death by a co-defendant in a federal case involving an assault on a federal officer, the Las Vegas Review-Journal has learned.

Wyatt Peterson was identified Tuesday by the Nye County Sheriff’s Office as the suspect in Frank Tocci’s death, which has been officially ruled a homicide by strangulation. Tocci, 28, was found unconscious early Friday during a security check at the Nevada Southern Detention Center, authorities have said.

The sheriff’s office on Tuesday did not release further details, but federal court records show that Tocci and Peterson, along with one other unidentified co-defendant, were being held at the facility about 70 miles west of Las Vegas, at 2190 E. Mesquite Ave., awaiting trial in the federal case.

According to the trio’s indictment, they “inflicted bodily injury” on a detention center officer in September 2017, although the document does not elaborate. All three had pleaded not guilty in the case, and their jury trial was set to begin Nov. 18.

Court records indicate that the alleged assault occurred while Tocci, a felon in Nevada, was being held on an unrelated federal charge after he was found in possession of a semi-automatic handgun that he had apparently sold and shipped or transported across state lines to complete the transaction.

Tocci had been convicted in Clark County District Court of charges ranging from burglary and attempted coercion to assault with a deadly weapon, according to Nevada Department of Corrections records.

His brother, Shawn Tocci, has said that he was on probation in a state case when he landed in federal custody.

Meanwhile, Peterson was being held on federal robbery-related charges when the assault took place. Trial was set to begin Aug. 27 in that case, records show.

It is unclear whether Tocci and Peterson were housed in the same cell or what the facility’s policies are, if any, on communication between co-defendants. Both the sheriff’s office and CoreCivic, which manages the detention center, have declined to release further details. Tocci’s attorney declined to comment Tuesday, while Peterson’s attorney did not respond to a request for comment.

“When in-custody deaths occur, similar to the free world, it is common practice for local law enforcement to investigate,” CoreCivic spokesman Brandon Bissell has said. “Due to an active and ongoing investigation by law enforcement, and to preserve the integrity of their investigative work, it would not be appropriate for CoreCivic to comment on the specifics of Mr. Tocci’s death at this time.”

What charges Peterson will face in the killing also were not disclosed Tuesday. He remains at the facility, which is used by Immigration and Customs Enforcement and the U.S. Marshals Service, among other law enforcement agencies.

Because both Tocci and Peterson were being held on federal charges at the time of the killing, the sheriff’s office is investigating with the assistance of the FBI and the Marshals Service.

The homicide investigation was officially announced Monday following several inquiries to the sheriff’s office and federal agencies by the Review-Journal, which reported the death on Saturday after the newspaper was notified of the situation by Shawn Tocci.

Frustrated and concerned by a lack of communication from CoreCivic, Shawn Tocci, who was unaware of the homicide investigation until a phone interview Monday with the newspaper, said he feared his brother’s death would otherwise not have been publicly announced.

“I didn’t want his death to be swept under the rug,” he said. “That’s why I reached out.”