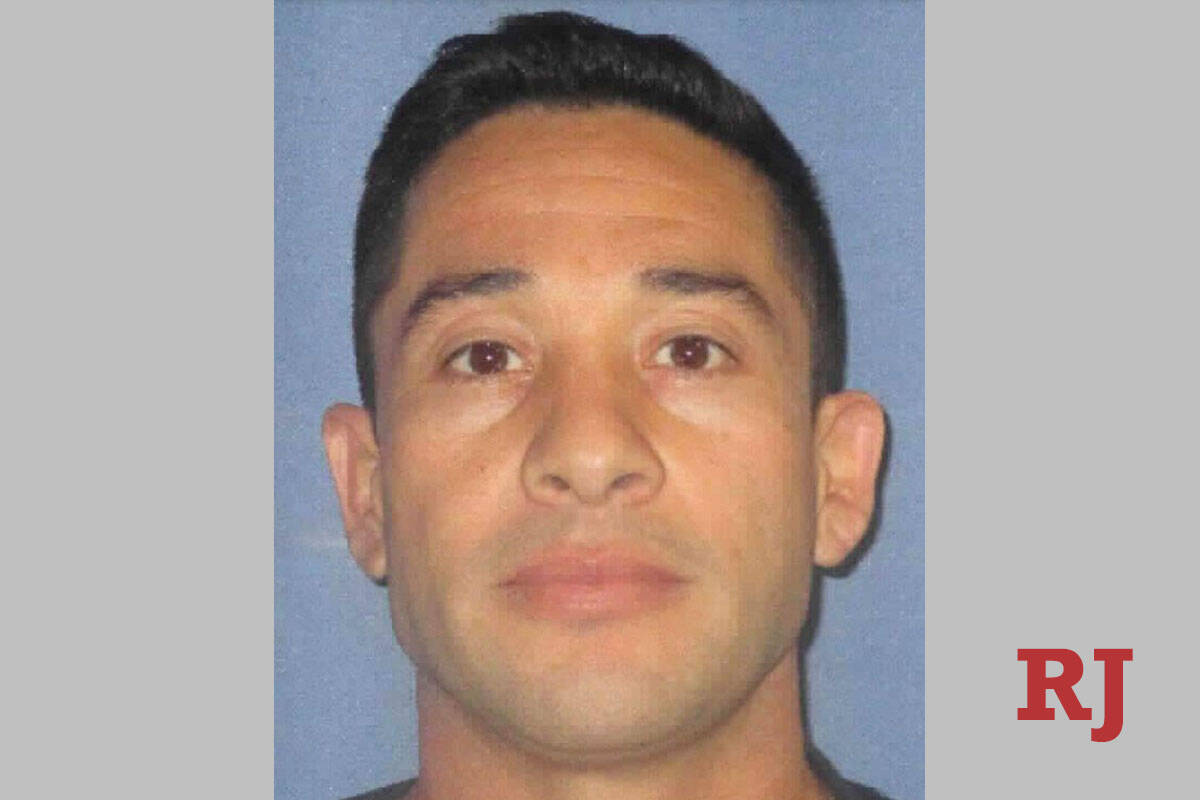 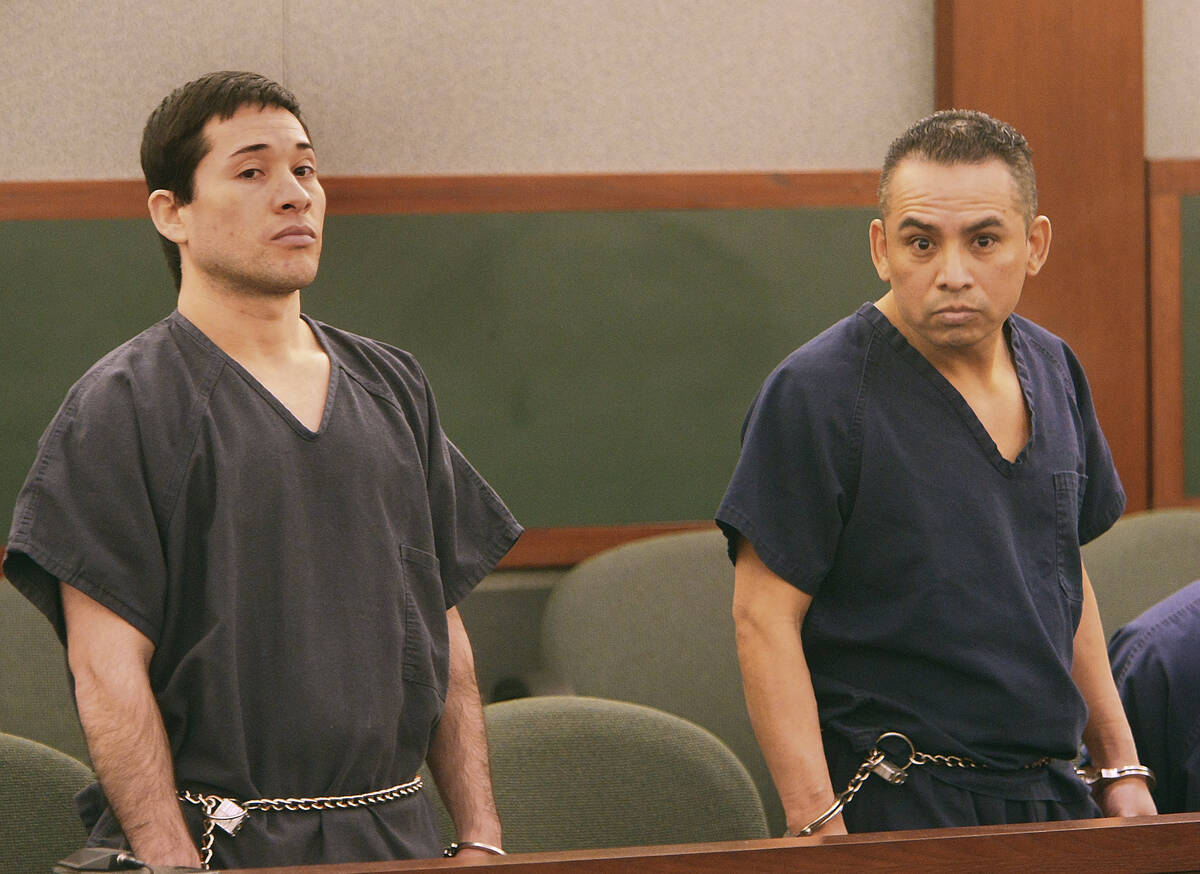 Porfirio Duarte-Herrera, left, and Omar Rueda-Denvers appear in Clark County District Court on Dec. 5, 2009, for a hearing. The two men were convicted earlier this year of the May 7, 2007 Luxor hotel-casino garage bombing that killed Willebaldo Dorantes Antonio. (Las Vegas Review-Journal/File) 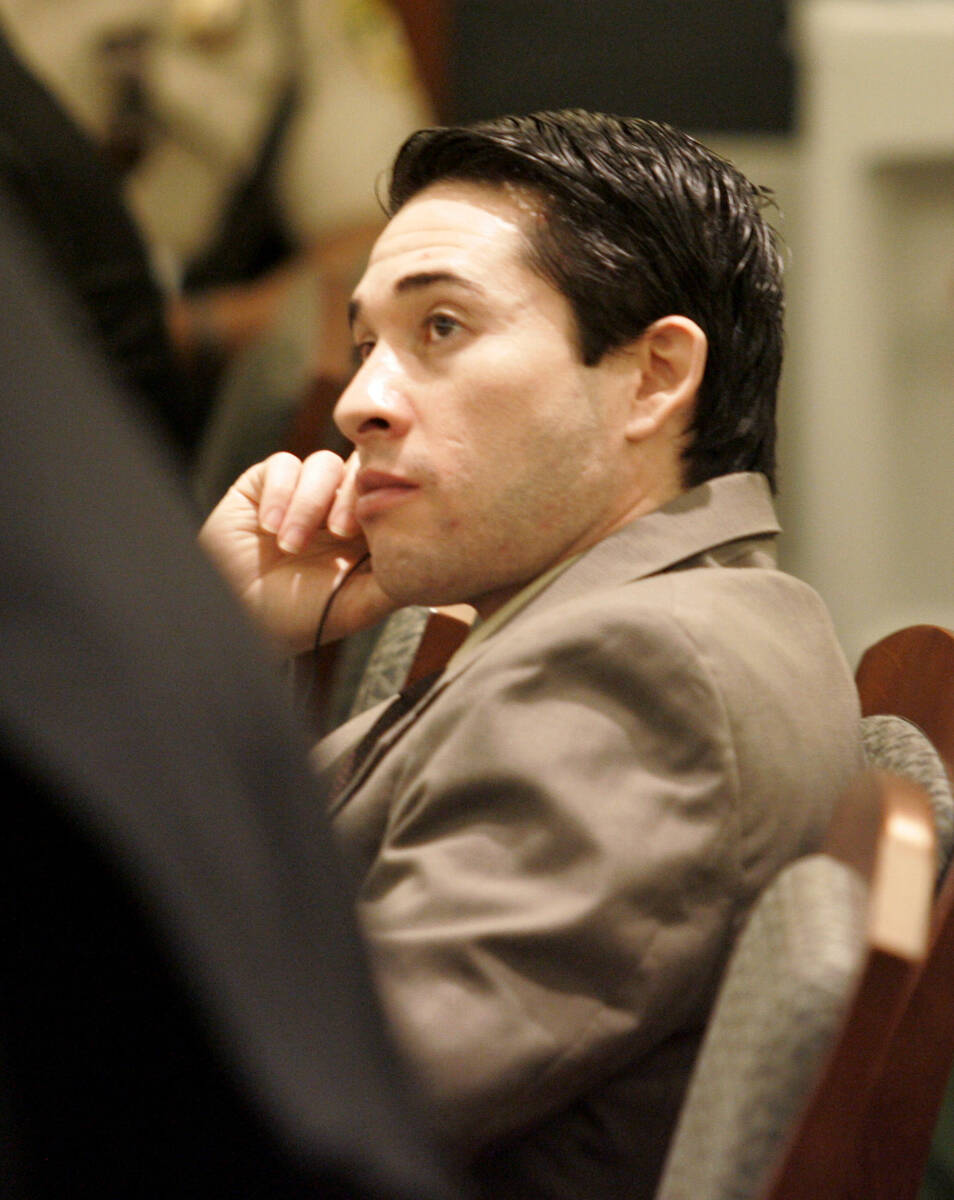 Porfirio Duarte-Herrera appears in court at the Clark County Regional Justice Center on Monday, Aug. 17, 2009, during jury selection proceedings for his trial in connection with killing a man. Duarte-Herrera and co-defendant Omar Rueda-Denvers are alleged to have placed a bomb in the parking garage at the Luxor hotel-casino on May 7, 2007, that killed 24-year-old Dorantes Antonio, who was reportedly in a relationship with the ex-girlfriend of Rueda-Denvers. (Las Vegas Review-Journal/File)

Las Vegas police captured the Luxor Hotel bomber late Wednesday after he had been unaccounted for since Friday.

Duarte-Herrera was taken into custody in the 1400 block of North Eastern Avenue around 9:30 p.m., police said.

Hours before his capture, the lawyer for Porfirio Duarte-Herrera, 42, who escaped from a Nevada prison late last week, had urged her client to turn himself in.

Las Vegas attorney Angela Dows said she was “flabbergasted” by the news that her client escaped from the Southern Desert Correctional Center in Indian Springs.

“I would encourage him to follow the law by turning himself in,” said Dows, who is representing Porfirio Duarte-Herrera in his effort to appeal his incarceration on a 2010 murder conviction.

#BREAKING: Federal authorities are now offering a combined $30,000 reward for information leading to the capture of Nevada Department of Corrections escapee Porfirio Duarte-Herrera. Here are some additional photos. (1/2) pic.twitter.com/G35KEbAiKm

Duarte-Herrera, 42, had been unaccounted for since Friday evening, though prison officials said Tuesday that escape procedures were not enacted until 8 a.m. Tuesday.

In a statement earlier this week, Nevada Gov. Steve Sisolak blasted the Department of Corrections for not only the escape but also the confusion around the timeline of the escape. After being informed Tuesday morning that Duarte-Herrera was missing, Sisolak’s office learned later Tuesday that Duarte-Herrera had been missing since the weekend.

“This is unacceptable,” Sisolak said.

Duarte-Herrera was serving a life sentence after he was convicted in 2010 of building and planting a pipe bomb atop a car in the Luxor parking garage, killing a casino hot dog stand worker in May 2007. His friend Omar Rueda-Denvers also was convicted of murder in the bombing.

Prosecutors said Rueda-Denvers orchestrated the attack to bring harm to his ex-girlfriend, Caren Chali, and her lover, Willebaldo Dorantes Antonio, 27, who died in the blast. Chali, the mother of Rueda-Denvers’ then-3-year-old daughter, was not harmed in the bombing.

In court filings, Duarte-Herrera says he is innocent. He lost his effort to win an appeal on Aug. 26, although he could still try to appeal to the U.S. Supreme Court, Dows said, declining to comment on whether or not that might happen, but also acknowledging the fact his escape has certainly complicated the appeal process.

In affidavits filed in the appeal attempt, Duarte-Herrera said he was forced by Metro detectives to confess to the bombing after they threatened to have his family members in the U.S. deported. He said he never provided any bomb or bomb-making materials to Rueda-Denvers.

‘Certainly have a lot of questions’

Dows wouldn’t speak to the substance of her client’s allegations and declined to divulge anything he might have said to her over the years, citing attorney-client privilege. She described Duarte-Herrera as being quiet and reserved, but she also noted he barely speaks English, so the language barrier might have contributed to his demeanor.

Dows also said she hadn’t seen any indications that would suggest her client was plotting a prison break — if indeed he was.

“I mean I certainly have a lot of questions, and I hope there’s a thorough investigation to figure out why this happened,” she said.

After being asked to help by the Nevada Department of Corrections, the U.S. Marshals Service is now part of the wider law enforcement net that’s been cast in the effort to find Duarte-Herrera, who is 5 feet, 4 inches tall and 135 pounds with brown eyes and brown hair.

The Metropolitan Police Department, the Nevada State Police and the Federal Bureau of Investigation are also involved in the search.

‘Anywhere he goes, anything he does’

The Marshals Service as of Wednesday afternoon was offering a $5,000 reward to anyone who provides information that would lead to the escapee’s capture, said Gary Schofield, the U.S. marshal for Nevada. Anyone with information can also call 866-865-8477.

Schofield said earlier that he couldn’t reveal the investigative techniques being deployed in the search, but he said the marshals are relentless when it comes to hunting down fugitives.

“He can assume that there’s nothing he’s doing in today’s day and age that we’re not taking a look at,” Schofield said earlier Wednesday. “Anywhere he goes, anything he does — everything is geared on trying to find him and getting him back into custody.”

Because Duarte-Herrera is originally from Nicaragua, investigators are also open to the possibility that Duarte-Herrera could be anywhere in the U.S., in his home country or somewhere else internationally. If he fled to another country, a diplomatic component would be added to the search, with U.S. officials handling anything extradition-related.

Asked about how the situation overall has been handled by the Nevada Department of Corrections and if it has complicated the search for the fugitive, Schofield said, “I’m not going to comment on that.”

Adding her voice to the chorus of criticism was Nevada Secretary of State Barbara Cegavske.

“I am outraged that the Department of Corrections did not notify the Board of Prison Commissioners of the escape when it was apparently first discovered this past weekend,” Cegavske said in a statement Wednesday.

“Personally, I found out about it through yesterday’s media posts,” she added. “We are awaiting the update on the investigation that the Governor has ordered, and we hope that the fugitive will be apprehended quickly and without incident. We expect that the Department will take measures to prevent such escapes and failures in communication in the future.”

The escape comes amid reports of turmoil within the Nevada Department of Corrections. NDOC staff has accused prison Director Charles Daniels of “erratic, hostile, and abusive” behavior after two suicides within hours of each other at High Desert State Prison, which neighbors Southern Desert Correctional Center.

On Sept. 16, prison staff sent a letter to Sisolak saying Daniels flew into a fit of rage during meetings about the two deaths. The letter referenced “critically understaffed departments.”

After the second meeting, staff said Medical Director Dr. Michael Minev resigned. Friday is expected to be his last day with the department.

Prison officials could not be reached regarding the last prison escape.

In 2005, Jody Thompson, an inmate with a history of escaping juvenile detention as a teen, hid in a prison van and fled the Northern Nevada Correctional Center in Carson City. He victimized 22 people in a series of crimes before he was caught in Las Vegas three months later, authorities said.

He worked with a dental assistant in the prison to get a cellphone and coordinate a pick-up near Reno, officials said. In 2007, the state Legislature made it a felony for an inmate to possess a cellphone without authorization or to provide one for an inmate.

Before that, the last escape reported at High Desert occurred in 2003 when Antione Jean hid behind a vehicle and eluded officials.