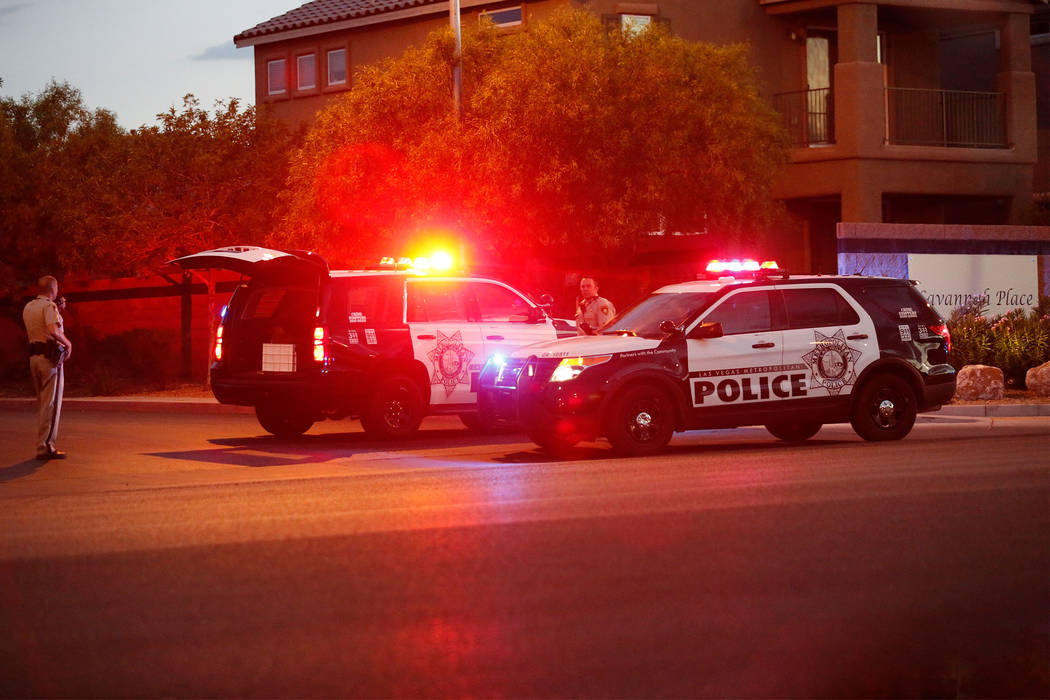 The father of a 4-year-old boy forced his way into the home of his estranged girlfriend and stabbed the child to death before killing himself Wednesday evening in Las Vegas, the Metropolitan Police Department said.

Police said the man forced his way into the home, tied the boy and his mother with zip ties and repeatedly stabbed them. The boy’s grandmother was inside the house on the 8700 block of Norton Peak Avenue, near S. Durango Drive and West Pebble Road, and called 911 about 7 p.m. She got the child and his mother out of the home and took them to Southern Hills Hospital, Metro Lt. Dan McGrath said. The man, in his 20s, was found dead with apparent self-inflicted stab wounds in the bathroom.

The woman “has significant stab wounds to her face and neck,” and was transferred to University Medical Center, McGrath said. She is expected to survive. The boy was pronounced dead at 7:20 p.m.

“I don’t have words to explain another incident like this,” McGrath said. “We’ve had too many of these. As a community I think, we really need to come together because of innocent people and children losing their lives.”

Two weeks ago and about four miles to the southeast, a man shot and killed a woman and his son before turning a gun on himself inside a house on the 10300 block of Numaga Road, near South Rainbow Boulevard and West Cactus Avenue. The coroner’s office identified the man as John Henry Lunetta, 40, and his victims as Karen Michelle Jackson, 34; and John Jr., who has killed days before his first birthday. Their bodies were found inside the house July 10, stunning a neighborhood.

Standing near the crime tape blocking off Partridge Hill Street at Timberleaf Court Wednesday night, several neighbors in pajamas, a few with dogs on leashes, lamented the proximity in time and distance of the two deadly domestic incidents.

“Why are they killing the kids? I don’t understand that part,” Diana Serotta said. “Leave the kid out.”

Serotta, 23, recalled passing the Norton Peak Avenue house on neighborhood walks. She remembers waving at the woman, who would wave back. Serotta said their interactions were often limited to small talk, but they were always friendly.

“I never sensed anything,” she said when asked if she saw any warning signs.

Another neighbor, who only wanted to be identified as Susana, mentioned the pervasiveness of domestic violence across communities and backgrounds.

“Goes to show crime can happen anywhere,” she said.

McGrath said there was one previous domestic violence call at the home in 2015. The man did not have a violent criminal history, McGrath said.

Police have not determined how long the attack went on, or how the grandmother escaped with the mother and child.

The Clark County coroner’s office will identify the child and man.

“The whole thing is just unfortunate and sad that we have to be out here talking about this again,” McGrath said.