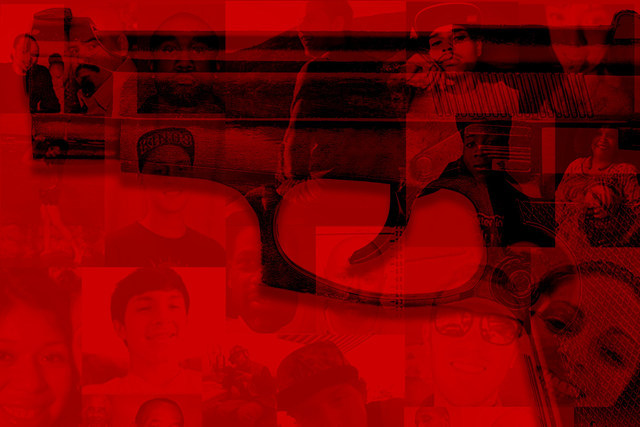 In the dark, predawn hours of April 23, an east valley recreation center erupted in gunfire.

More than 50 rounds were unloaded into the air as knives were pulled and a large group slashed and shot at each other before 4 a.m. Once the shooting stopped and everyone bolted from the park, one person was found stabbed and four were found shot.

One of the shooting victims, Angelo Barboza, died. He was just 15. Las Vegas police, who have arrested a 15-year-old suspect in the killing, said almost everyone at the 1650 S. Hollywood Blvd. center at the time was under the age of 18.

Local news media gave the case widespread attention, and the incident prompted Clark County Sheriff Joe Lombardo to address the public that week on the valley’s crime wave, which he said was causing him to lose sleep. Half the year’s homicides had been attributed to gang activity, he said at the time, and much of the recent violence had involved young people.

The violent nature of the Hollywood Recreation Center incident and the amount of young people involved made it representative of April, the deadliest month the Las Vegas Valley has seen all year, at a time when homicides were up by more than 100 percent compared with that time last year.

By the end of June, the increase was 61 percent. Police throughout the valley had investigated 104 killings, up from 64 during the first six months of last year. A Las Vegas Review-Journal analysis of those deaths, which do not include three caused by officer-involved shootings, showed that most victims were under the age of 40. And of those arrested on related murder charges, 56 percent were in their 20s.

Nearly 13 percent of those arrested were teenagers. Jason Lloyd Carlton II, 16, was the youngest person to be certified as an adult and face murder charges in the first half of the year. He was arrested in connection with the death of Clinton Anglehart, 27, who was stabbed to death outside a southwest valley McDonald’s on April 17.

The Review-Journal analysis of 2016 homicides through June revealed that 37 percent of the victims were in their 20s, and 20 percent were in their 30s. Fourteen of them were teenagers who ranged in age from 14 to 19. The youngest homicide victim was 5-month-old Romelo Brayton, who police said was intentionally dropped on his head by a baby sitter. The next youngest victim was 9-year-old Xonajuk J.J. Dej-Oudom. The boy was killed June 29 by his father, who also killed his two siblings and their mother before killing himself.

About 80 percent of slayings, including the Dej-Oudom family deaths, involved a gun. Most happened in the central and eastern portions of the valley.

McGrath said about 40 percent of Metro’s homicide cases this year had some type of gang affiliation, which means they had a loose link to known gang activity, as opposed to a death resulting directly from gang fights or retaliation. Of those gang-affiliated homicides, most were the consequence of an unrelated argument or dispute that ended in gunfire.

“It’s hard to explain when we’re being asked, ‘What happened?’” he said. “How does that happen? How do these younger people just take out a gun and start shooting? They’re not thinking.”

“They are heard, sometimes, crying on the phone when they’re in jail,” he said of young offenders. “They put on this facade sometimes out in the street, and then they don’t realize the repercussions of what they’ve done until they’re charged and in custody.”

Violent crime as a whole was up about 20 percent in Metro’s jurisdiction at the end of June, compared with that time last year. North Las Vegas police dealt with a 13 percent rise in violent crime, and Henderson police experienced a 36 percent increase.

Police departments across the United States have been fighting spikes in violent crime this year. Of the 51 U.S. agencies sharing statistics with the Major Cities Chiefs Association, 29 reported increases in homicides during the first half of the year compared with the same period in 2015.

In the valley, Sheriff Lombardo has blamed the increase in violent crime on the presence of California gang members.

“As long as I’ve been a law enforcement officer here in Las Vegas, we have seen individuals directly related to California committing crimes here in substantial numbers,” he said in April.

But experts caution against anecdotally linking crime increases to established gangs or criminal organizations. Donald Hummer, an associate professor of criminal justice at Penn State Harrisburg who has studied crime causation and Nevada prisons, said violent crime instead can be attributed to “groups of people, people in a collective.”

“It’s not like a formal thing, like you see in the movies; it’s people sharing a space,” he said. “It’s basically disagreements. And the way that they solve things? They shoot each other. And it continually feeds itself.”

Hummer estimated that 95 percent of the teens involved in the Hollywood Recreation Center shooting in April “didn’t want to be there.”

“They don’t want to be carrying guns and having to shoot other people,” he said. “They probably hate it, but it’s their life. They don’t see law enforcement or the justice system as their allies. That’s the group behavior, and that’s the most difficult part.”

Hummer said one way to combat the issue could be a more centralized approach to the problem.

“It takes a very coordinated response and something that’s sustained for a long period of time,” he said. “It’s not one arrest or one drug kingpin; it has to be ongoing. And when police departments don’t have the resources, it can be challenging.”

The most successful response to crime increases so far this year was Metro’s creation of three “neighborhood engagement teams,” which serve as centralized units that can be dispatched to problem neighborhoods, apartment complexes or streets specifically to target violent offenders and recover stolen weapons.

Two of those teams operate throughout Metro’s entire jurisdiction. One, paid for by the city of Las Vegas, is limited to the city’s confines. Together, their presence has seemed to have a slowing effect on valley slayings.

“It’s not scientific,” McGrath said, holding up a month-by-month breakdown of homicide counts this year. But as he pointed from April, to May, to June, he noted, “We have seen a decrease.”

The teams were created after another Metro move earlier this year, called the “violent crime initiative,” aimed to put more cops on the streets by cycling detectives and other plainclothed officers into temporary patrol shifts.

But Hummer said “there’s no huge correlation between the number of police officers and violent crime.”

“It’s what you do with those police officers,” he said. “It’s how you use them.”

That’s one reason the violent crime initiative was soon cycled out and replaced with the three engagement teams. Police unions complained that while putting additional officers on the streets seemed more proactive, the plan temporarily pulled dedicated detectives off casework, which risked slowing the arrest and prosecution process.

Since the engagement teams were deployed instead, the unions grew more supportive. Last month, the sheriff said the move has been “highly successful, and it’s working.”

But the teams have a time limit. They were created as a temporary solution to quell violent crime throughout the summer, and it is unclear whether any of the teams will be operating in the fall.

“We will make a decision sometime in September whether we will continue with one team or two,” the sheriff said. “I anticipate a minimum one team would be in place.”

Hummer said police departments aren’t the only agencies that play a role in slowing or preventing crime.

“It’s not a panacea to arrest more people, because something has to happen afterward,” he said. Instead, violent crime “needs a sustained, coordinated response, not just from law enforcement but prosecutors, probation and parole, the federal system.”

The Review-Journal analysis of 2016 homicides through June revealed that 37 percent of the victims were in their 20s, and 20 percent were in their 30s. Fourteen of them were teenagers who ranged in age from 14 to 19. The youngest homicide victim was 5-month-old Romelo Brayton, who police said was intentionally dropped on his head by a babysitter. The next youngest victim was 9-year-old Xonajuk J.J. Dej-Oudom. The boy was killed June 29 by his father, who also killed his two siblings and their mother before killing himself.