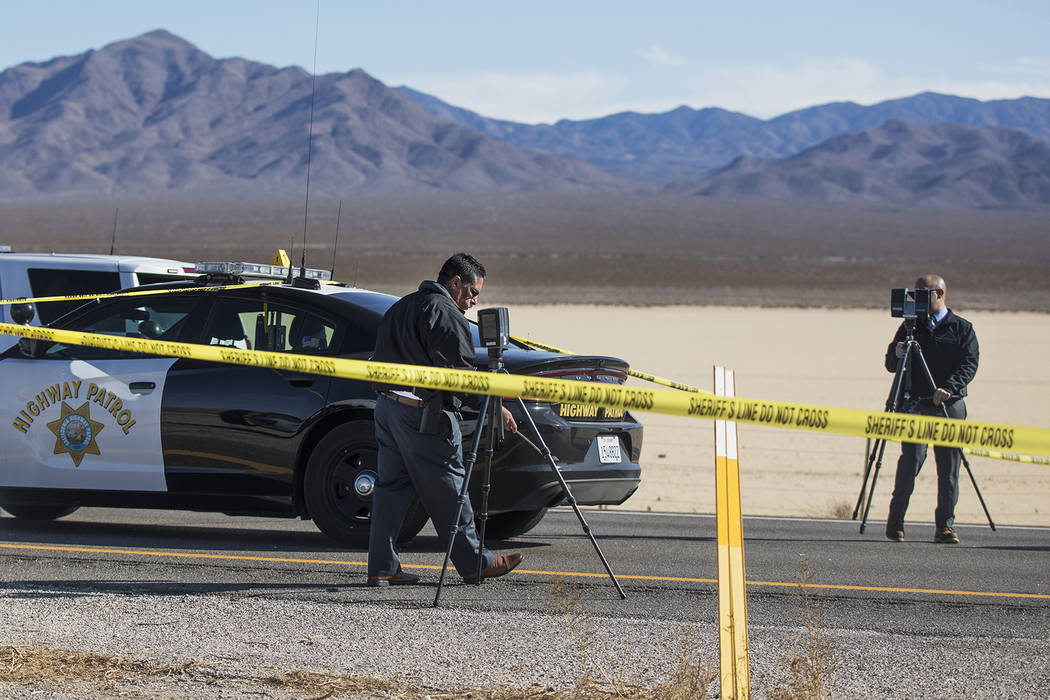 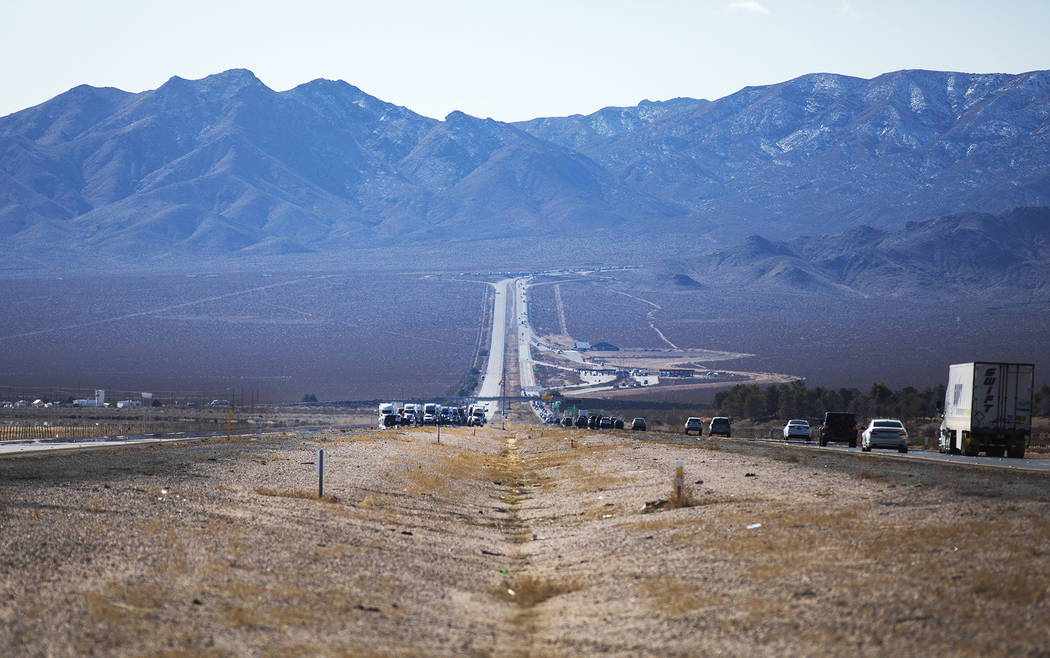 Motorists are stuck on northbound Interstate 15 ahead of where the police are working the scene of a fatal officer involved shooting south of Primm, Wednesday, Jan. 8, 2020. (Rachel Aston/Las Vegas Review-Journal) @rookie__rae 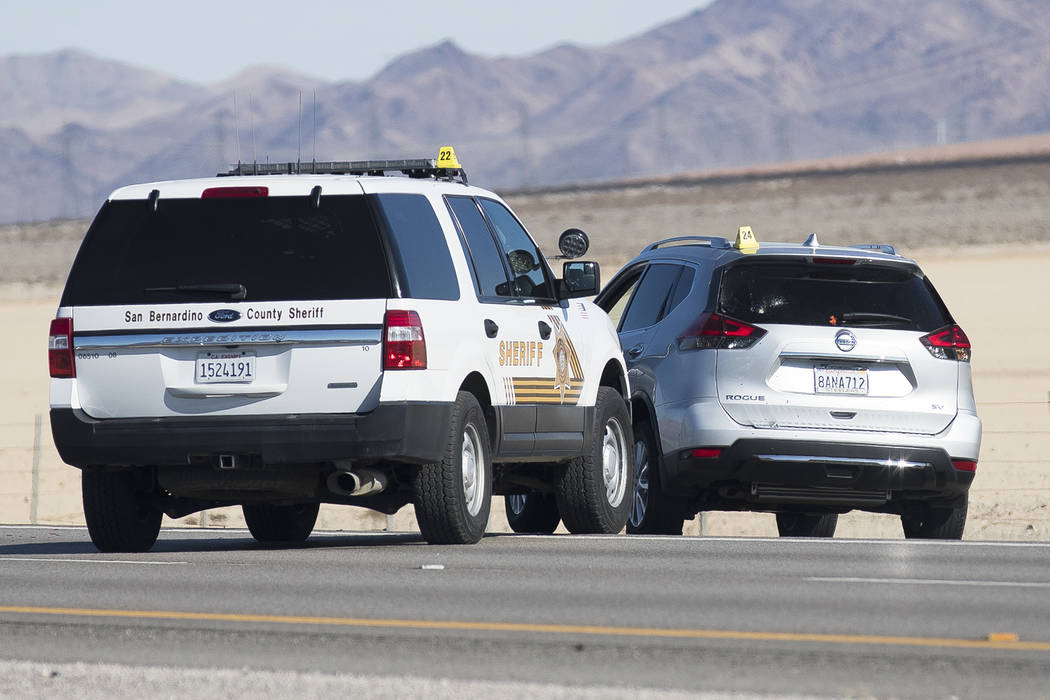 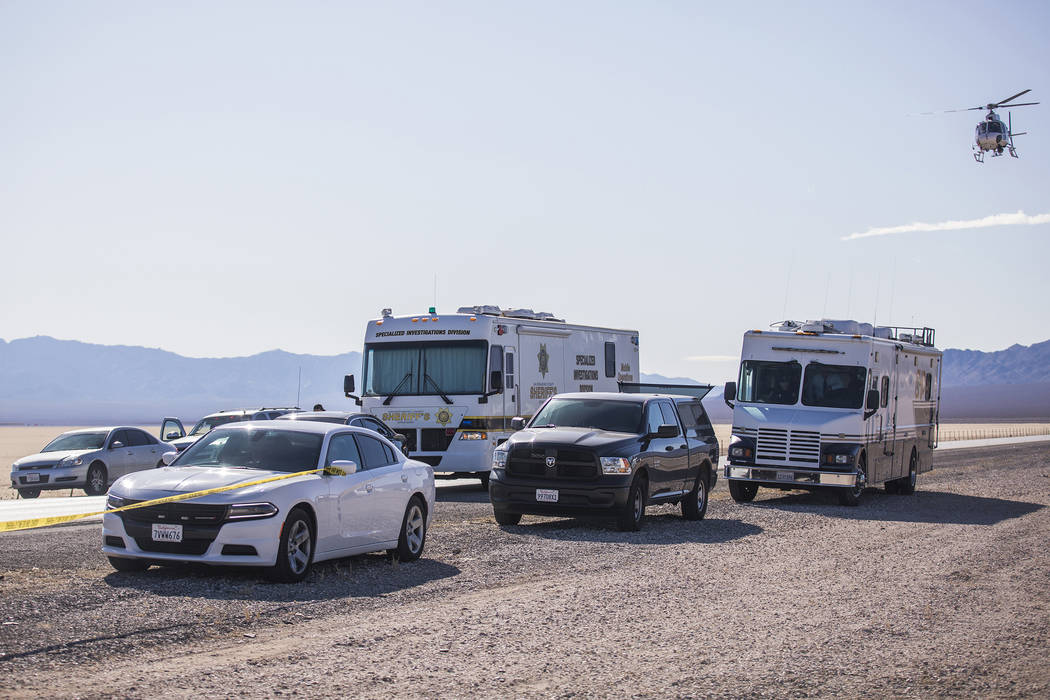 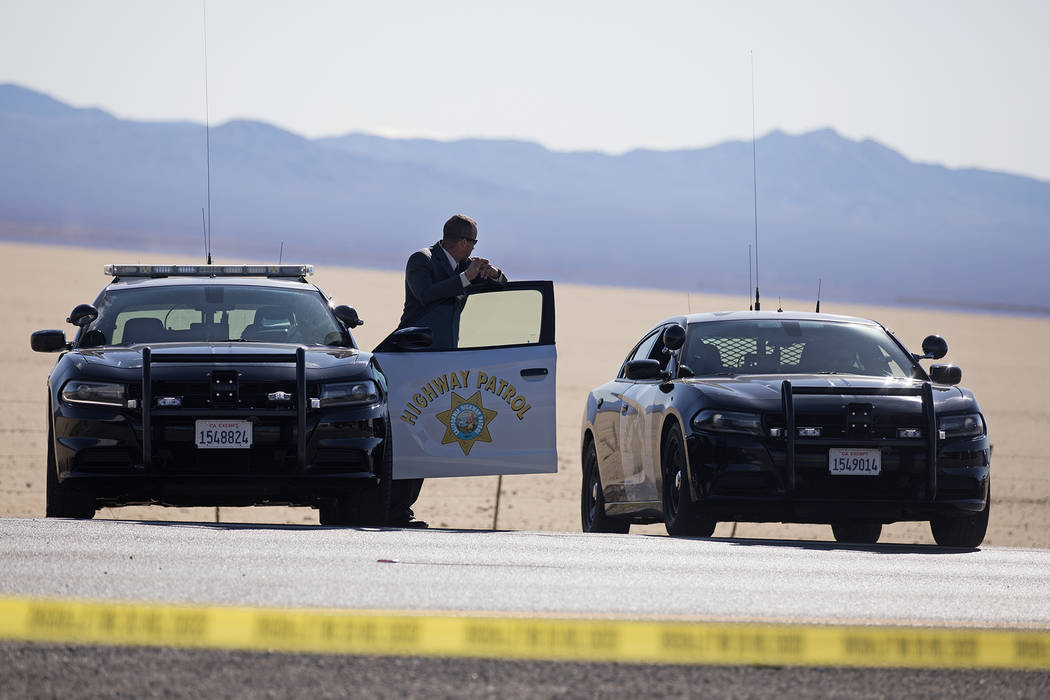 A man suspected of killing his mother died following a “lethal force encounter” with California law enforcement Wednesday night on Interstate 15 near the Nevada state line.

The man’s death and the investigation by California authorities triggered a nearly 20-hour closure of the highway in both directions, which lasted until Thursday afternoon. San Bernardino County Sheriff’s Department deputies opened fire on the murder suspect, identified Thursday afternoon as 27-year-old Madison Adams of Tehachapi, California, after finding him stopped on the shoulder of northbound I-15 south of Primm, according to a statement from the department.

San Bernardino deputies were searching for the man after receiving notice from California’s Kern County Sheriff’s Office to be on the lookout for an “armed and dangerous murder suspect” driving a 2017 Nissan in the Baker, California, area. The Kern County Sheriff’s Office said Thursday that deputies started looking for the man after officers found Adams’ mother dead “with traumatic injuries” during a welfare check in the Tehachapi area, which is about 200 miles southwest of Primm.

Kern County authorities confirmed Thursday that Adams was a suspect in his mother’s death. The Kern County coroner’s office identified the woman as Guadalupe Adams, and said they are investigating her cause and manner of death.

“As the officers conducted a high-risk traffic stop on the vehicle, an officer-involved shooting occurred,” the San Bernardino Sheriff’s Office release said.

The release did not elaborate on how many officers fired at Adams, or how many times he may have been hit. The Sheriff’s Office did not return a request for further comment Thursday.

California authorities announced the reopening of the northbound lanes of I-15 about 3 p.m. Thursday, more than 20 hours after the Nevada Highway Patrol tweeted about the closure of lanes in both directions at 6:50 p.m. on Wednesday. Southbound lanes of the freeway reopened after a little more than an hour, but northbound lanes remained shut at Nipton Road, about 13 miles south of Primm, overnight and for much of the day Thursday.

The closure of the major artery between Southern California and Las Vegas left many motorists stranded on the interstate, forcing them to take alternate routes to reach Southern Nevada.

Update. Estimated time of opening now later this afternoon. Use I-40 or other routes for detour. Avoid travel northbound 15 if possible and wait until it reopens. https://t.co/TsyKLzMu6o

Many motorists were frustrated with what they described as a lack of communication from law enforcement at the scene.

Montgomery Granito of Los Angeles said he and his family were driving from Southern California to Nevada when they came upon the road closure Wednesday evening in the northbound lanes.

He said he waited with his family in their vehicle for nearly seven hours at the roadblock until finally learning that, at an exit miles earlier, traffic was being diverted to Nipton Road, offering a long route around the scene to reach Nevada.

Granito said he and other motorists were never told about the traffic diversion by law enforcement. He said he finally crossed the median to the southbound lanes, then headed back to an exit they had already passed to get around the roadblock. He estimated between 30 to 60 vehicles sat unnecessarily at the road block all night and many were still there when he left Thursday morning.

“They never interacted with us. They never talked to us,” Granito said.

Another motorist, Kevin Shea, expressed similar frustrations. He said he was driving from Southern California to Las Vegas early Thursday and was never diverted off the interstate. He ended up stranded on I-15 for more than an hour.

“Google maps indicated there was a 24-minute delay,” Shea said. “There were not any closures at the last major intersection so we could turn around and be rerouted. I got sent on I-15 north and got stuck in a 12-mile backup. People in front of me have been here for 12 hours. It could cause medical issues, nutrition issues.”