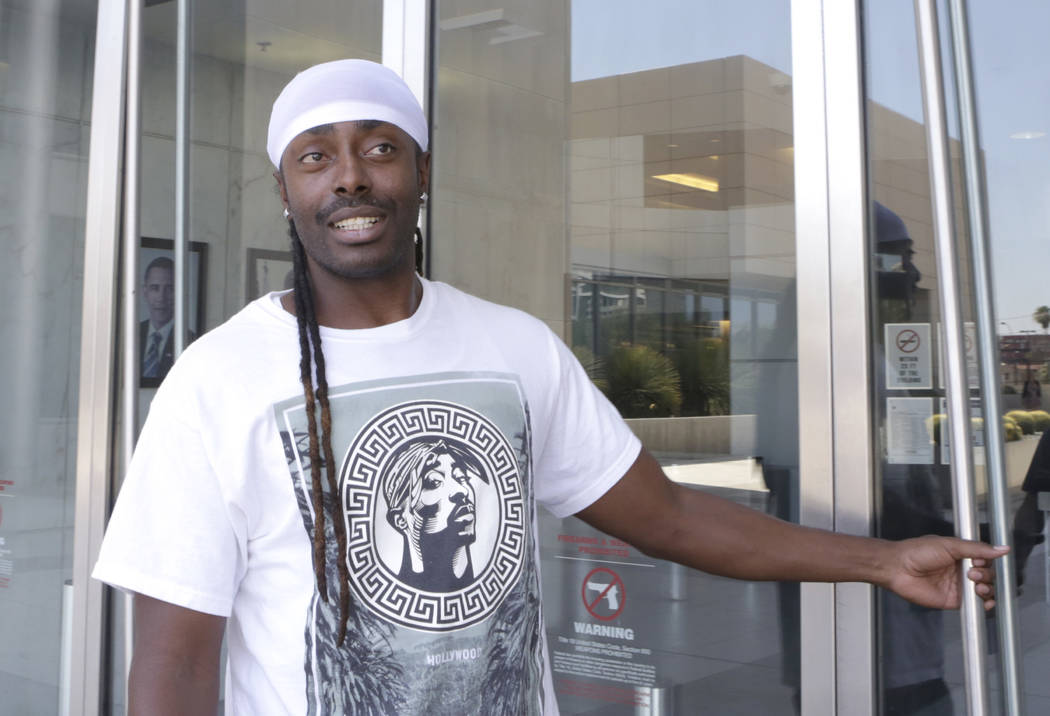 A Las Vegas man who orchestrated a pair of jewelry store heists just months after walking away from similar robbery charges because of a legal blunder was ordered to serve more than 27 years in federal prison Monday.

As the hearing began, Wright immediately quarreled with the judge, saying he was “innocent” and objecting to the process.

“I’d rather just leave,” he said, referring to the judge as “Ms. Dorsey” and calling the proceedings a “farce” and a “circus” before court marshals escorted a shackled Wright from her courtroom. “I don’t want to be nowhere near you people. … You dirty as hell. You too dirty.”

Dorsey, who oversaw a weeklong trial in which Wright represented himself, pointed to his “disruptive” and “obstreperous” behavior but said it did not factor in her sentence.

Federal prosecutors argued that Wright had conspired with several others, who testified against him, to commit two armed jewelry store robberies in January 2017. that “terrified employees” and forced customers to their knees at gunpoint

Assistant U.S. Attorney Nadia Ahmed spoke of Wright’s life of crime along with the robberies, which risked the lives of “everyone in those jewelry stores” at Wright’s direction.

At least two of the employees had been present when prosecutors said Wright robbed the same stores in 2014. He was on supervised release on charges stemming from that case three years later.

“The suffering, the pain, the lasting turmoil Wright and his co-conspirators left the employees and customers of these stores to deal with was and is nothing to the defendant,” Ahmed wrote in a sentencing memo.

Throughout his trial, Wright accused prosecutors and the lead FBI agent on his case of scheming as part of a vendetta against him after he walked out of court a free man in July 2016.

While Wright did not enter the stores, prosecutors said, he was nearby and communicating with the gunmen during a holdup at Jared The Galleria of Jewelry on North Rainbow Boulevard and at MJ Christensen Diamonds on West Charleston Boulevard.

More than $800,000 worth of merchandise was stolen. Authorities later recovered the jewels.

Wright kept watch and listened to a police scanner while the robberies occurred, and his fingerprint was found on a garbage bag that held some of the jewels, prosecutors said.

At trial, Wright was not allowed to refer to a previous prosecution error that let him walk free in a case that could have led to a 100-year prison sentence.

In 2016, the government failed to turn over key evidence to Wright until the morning of his trial in the 2014 holdups in which more than $1.1 million in merchandise was stolen from Jared and two other jewelry stores.

Wright’s method of operation in 2014, according to prosecutors, matched his actions in 2017: He recruited gunmen and getaway drivers to carry out the robberies. He usually would be in the area and would collect the stolen goods, prosecutors alleged.

“Nothing will stop him,” the prosecutor said, “except putting him in prison.”