The Metropolitan Police Department started the new year by touting a 0.9 percent drop in violent crime between 2016 and 2017.

“We began last year committed to reducing violent crimes, and we were able to deliver (on) that promise,” Clark County Sheriff Joe Lombardo said in a January statement. “We still have more ground to cover, but we’re headed in the right direction.”

Yet that reported dip in crime is insignificant, several criminologists told the Las Vegas Review-Journal. And it charts the change between only two years, which is not considered a reliable trend.

“This is only a small drop in the bucket,” said John Eterno, a retired New York City police captain, professor of criminal justice at New York’s Molloy College and co-author of “The Crime Numbers Game: Management by Manipulation.”

A closer look at Metro’s homicide numbers also reveals a handful of discrepancies and a glaring — albeit admitted — omission: the 58 people killed in the Las Vegas mass shooting.

In the department’s January announcement, titled “LVMPD Shows Decrease in Violent Crime in 2017,” Metro reported a total of 141 homicides investigated last year. Metro said that total yielded an 83 percent clearance rate, a measure of the amount of cases that resulted in an arrest.

A Review-Journal analysis of those cases showed that based on the 141 cases Metro mentioned, the clearance rate is accurate. But that total does not include two cases investigated by the department.

The first case missing from Metro’s total happened in the early hours of Jan. 4, 2017, when Daniel Aldape was bludgeoned to death while sleeping on the southeast corner of Ogden Avenue and City Parkway, near downtown Las Vegas. About a month later, another man, David Dunn, was also killed while sleeping, this time on the opposite side of the same intersection.

Shane Schindler was arrested in connection with both cases and was sentenced to at least eight years in prison after pleading guilty to attempted murder.

The case drew national attention for the unusual tactics Metro used to catch the suspect. Those tactics involved setting up a decoy mannequin disguised as a sleeping person. Schindler was caught on camera striking the mannequin with a hammer.

Yet Aldape the first man killed was not included in Metro’s reported total of homicides last year. Deputy Chief Shawn Andersen told the Review-Journal that Aldape was left out of the total because he was not killed in Metro’s jurisdiction.

“That occurred on Union Pacific Railroad property, and that is patrolled by the railroad police, and that’s their area of responsibility,” Andersen said. “We investigated it, but it occurred in their jurisdiction.”

The department’s initial reporting of the homicide included no mention of it happening on railroad property. In a news release sent Jan. 5, 2017, Metro described Aldape’s death as “the 4th homicide investigated by LVMPD in 2017.”

Dunn, the other man killed in the same area, was included in Metro’s 2017 total.

Deadly use of force omitted

The second case left out of Metro’s 2017 homicide total was the May 13 death of Tashii Brown, who died after Las Vegas police officer Kenneth Lopera stunned him seven times with a Taser and held him in an unauthorized chokehold for more than two minutes, violating numerous department policies.

The coroner determined that Brown died from asphyxiation due to police restraint and ruled his death a homicide. Lopera was charged with involuntary manslaughter and oppression under the color of office. He was the first Metro officer in more than 20 years to be charged in connection with deadly use of force.

“So it’s just carried in a separate log,” Andersen said.

While it is typical for the department’s force investigation team to document and investigate police use of force, Metro deemed Brown’s death a negligent homicide, said Patrick Baldwin, Metro’s director of crime analysis.

Brown lost consciousness just outside The Venetian, which falls in Metro’s jurisdiction. And the chokehold began after a short foot chase, which police said Lopera did not have “reasonable suspicion or probable cause” to initiate, according to his arrest report.

When asked why the investigating unit matters when compiling department-wide homicide totals, Andersen said, “That’s department policy, and that’s the way we handle those things when they occur.”

“It looks to me like they are trying to show themselves in the best possible light, which is their job,” Eterno said. “But we worry about them playing with the numbers to the point where we’re not getting any true value out of the numbers.”

A request to speak with Lombardo was denied.

Also left out of Metro’s 2017 homicide total were all the people killed in the mass shooting.

At the time, a department spokesman said the decision to leave the Las Vegas shooting victims out of the department’s homicide statistics was because of federal reporting guidelines.

The FBI said in a statement to the Review-Journal that “the final responsibility for data submissions rests with the individual contributing law enforcement agency.”

“Although the FBI makes every effort through its editing procedures, training practices, and correspondence to ensure the validity of the data it receives, the accuracy of the statistics depends primarily on each contributor,” the statement continued.

The FBI did not say whether specific guidelines exist for reporting mass casualty incidents, but a review of the department’s crime-reporting manual showed none.

All local law enforcement agencies have until March to submit crime data, the FBI noted.

About a week after the Metro news release on crime statistics came out, Baldwin told the Review-Journal that Metro did in fact count the 58 people killed in the department’s submission to the FBI.

“The intent was always to submit them,” the director of crime analysis said. “What we got clarification from the FBI on was how to report an incident like that.”

In local statistics, though, the omission stands.

“The 58, because of the anomaly of the one event, it didn’t help us look at homicide trends for the rest of the valley,” Baldwin said.

It remains unclear whether the hundreds of people who survived gunshot wounds Oct. 1 were included in the department’s local or federal crime numbers. Metro did not provide an answer.

‘A homicide is a homicide’

Ivan Kuzyk, the director of policy and management at the Connecticut Statistical Analysis Center, said there “was no discussion at all” about whether to include the death toll from the mass shooting at Sandy Hook Elementary School in Newtown, Connecticut, in the state’s FBI submission.

“In my experience, as unfortunate as it is, a homicide is a homicide,” Kuzyk said.

Kim English, a research director at the Colorado Division of Criminal Justice, questioned why Metro would even consider leaving the mass shooting victims out of any crime totals, local or federal.

“As a researcher, that makes no sense to me,” she said. “These are people that deserve to be counted. Why would you not report something as significant as any homicide, let alone multiple homicides? Everybody’s going to know what it was.”

While the Sandy Hook death toll was submitted to the FBI, police in Newtown omitted the numbers from their local homicide count.

Michael Kehoe, who served as Newtown’s chief of police at the time, said the town typically saw a murder once every five to seven years, and the shooting “obviously would have skewed” the statistics.

“I could have put it in there. But they knew it. I knew it. It wasn’t like I was trying to hide anything,” Kehoe said. “That’s something you cannot hide.”

Tim Bedwell, who announced his candidacy for Clark County sheriff this month, said he sees no reason to omit the 58 victims from Metro’s 2017 homicide total other than “to make the numbers look better in your favor.”

“This wasn’t a terrorist attack from a foreign nation like 9/11. This was an attack on Nevadans and guests on the Strip by someone who regularly visited the Strip,” he said. “This is an incident that could be repeated.”

“It makes it difficult to rationally discuss safety on the Strip if you omit the 58 people killed,” Bedwell added.

Eterno, the criminology professor, noted that Metro’s announcement in January did include nuggets of “good news.” Metro’s homicide solvability rate is relatively high, and the department showed an 11.3 percent drop in robberies.

But he also noticed a red flag: The number of rapes shot up 8.4 percent in Metro’s jurisdiction.

“Rapes are usually one of the most under-reported crimes,” Eterno said. “If that number is going up, that’s a huge warning sign for violent crime.”

Andersen, the Metro deputy chief, said the rape increase is “of course a concern.” The number of aggravated assaults also went up 4.8 percent.

Baldwin, the department’s crime analysis director, said that while the sheriff’s January comments were positive, “I don’t think anybody is declaring victory.”

“There’s a lot of work to do, but that doesn’t minimize that we did show progress in 2017,” Baldwin said. 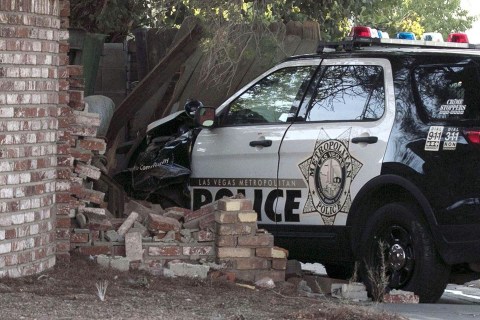 A shooting suspect led Las Vegas police on a lengthy vehicle pursuit throughout the valley Friday morning, causing the wreck of a patrol car. 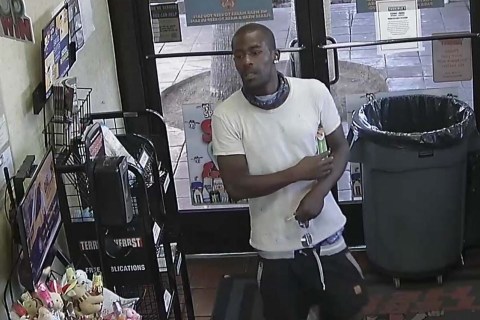 A 32-year-old man has been arrested in the assault on a disabled senior citizen at an east Las Vegas Valley shopping center, according to law enforcement records.

“She built her life in the military on her own,” said the victim’s father, Ron Lynch. “She is a hero.” 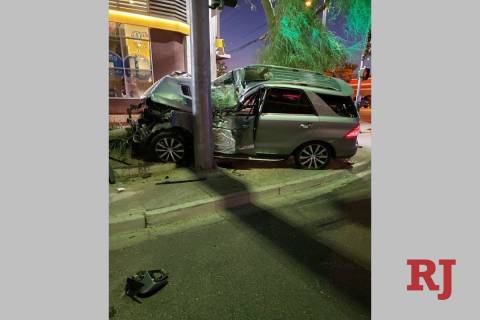 The SUV driver who fatally struck two 16-year-old Las Vegas girls Monday night admitted to using drugs earlier in the day, according to an arrest report.