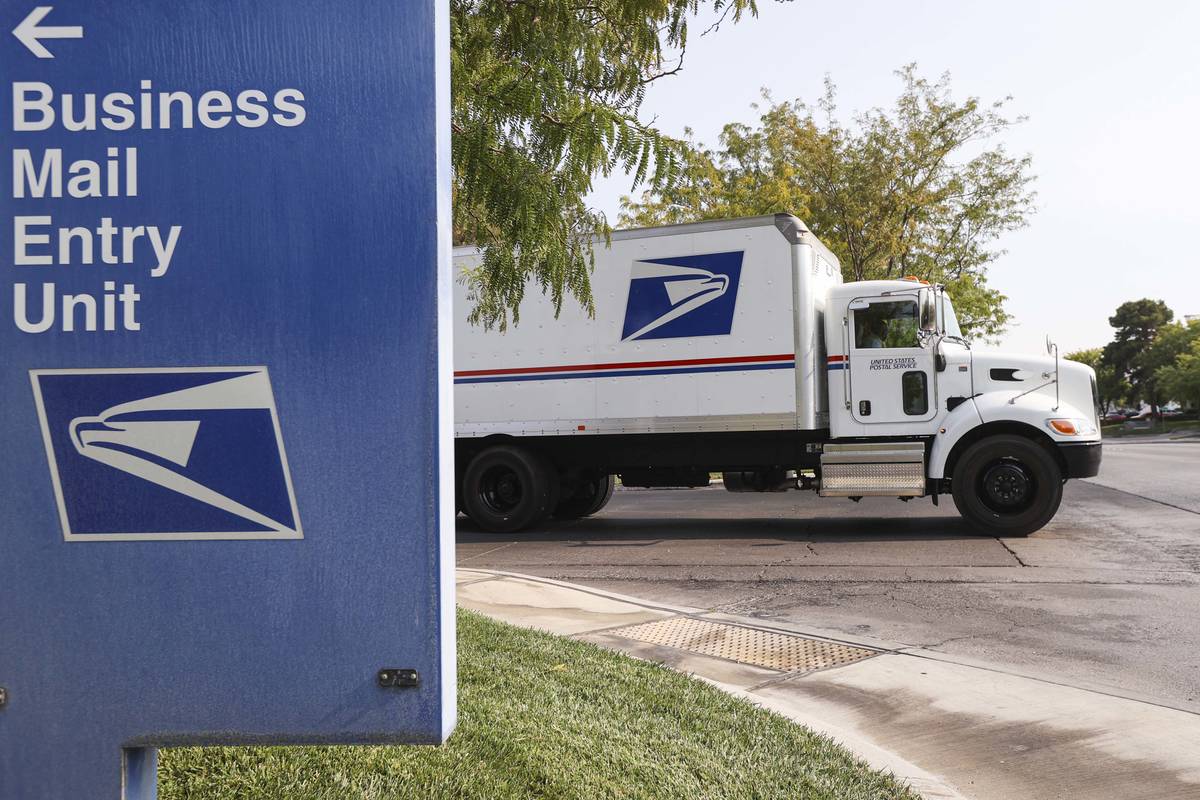 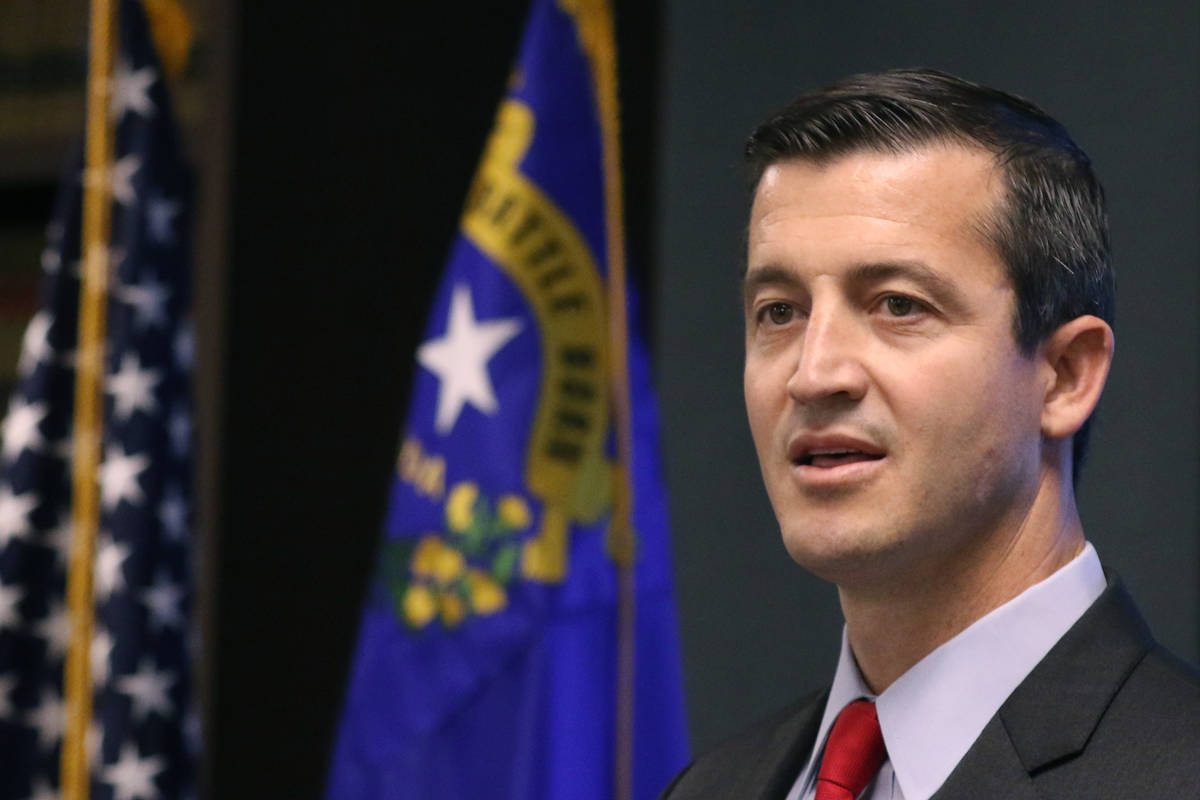 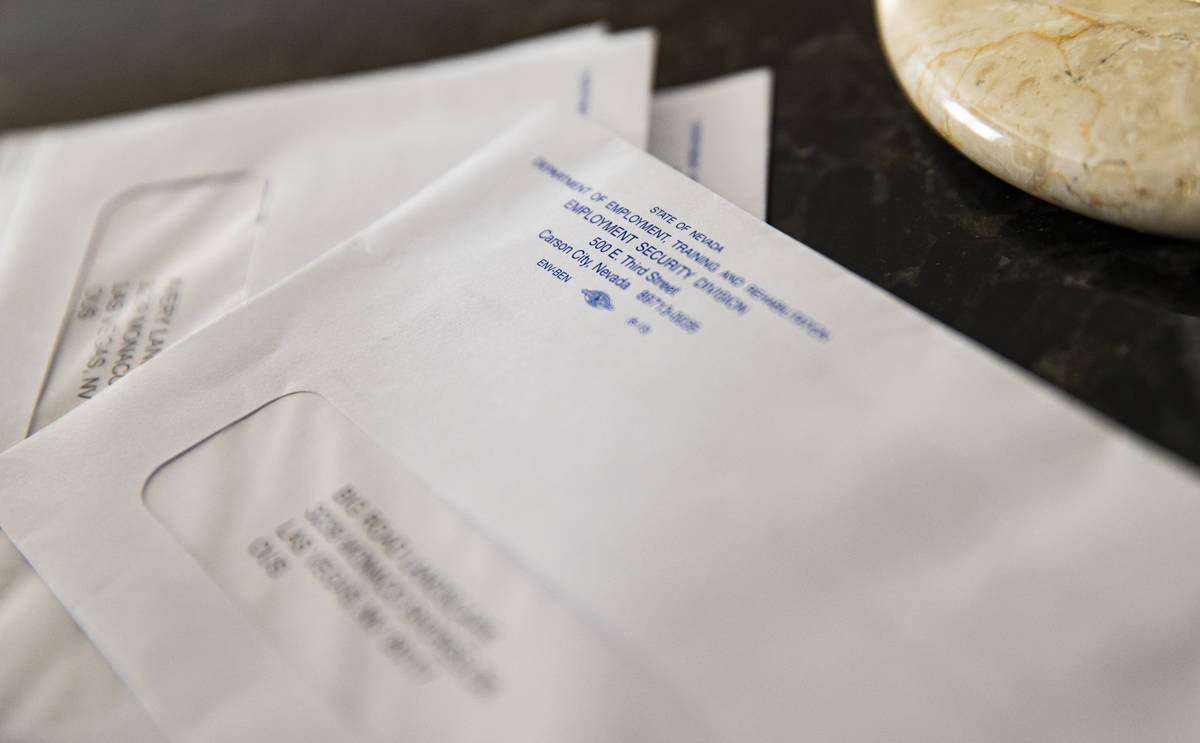 Letters from the Nevada Department of Employment, Training and Rehabilitation, that have been addressed to different people using the same home address in Las Vegas on Tuesday, Oct. 13, 2020. (Chase Stevens/Las Vegas Review-Journal) @csstevensphoto

A Las Vegas mail carrier is among a handful of people charged in an ongoing effort to crack down on fraudulent unemployment claims filed with Nevada’s employment agency.

Black “knew about the mail activities of these addresses because they were on the route Black delivered mail,” according to the criminal complaint. A spokesman for the Postal Service said that Black is still employed, “although in a non-duty, non-pay status pending the outcome.” Black has been with the Postal Service since February 2014.

In another case, Las Vegas resident Antwine Hunter, 33, was charged by federal prosecutors this week with mail fraud and aggravated identity theft. In late September, the Metropolitan Police Department raided Hunter’s home after he was allegedly discovered selling illegal drugs from his residence. Police reported finding at least eight DETR-issued debit cards, approved for at least $215,000 in unemployment benefits, that do not bear Hunter’s name.

Both cases are being prosecuted by Las Vegas-based U.S. Attorney Nicholas Trutanich and his team.

Trutanich said Thursday that his office will prioritize unemployment fraud cases moving forward, adding that the criminal complaints filed over the last several days “is what the public already knew intuitively, that there’s fraud that’s happening.”

“The true victim of these fraud crimes are unemployed citizens, relying on these benefits to feed their families, and keep a roof over their heads,” said Johnson.

It is estimated that fraudsters exploiting the COVID-19 pandemic have pocketed $26 billion in unemployment benefits this year across the U.S., according to a recent report from the Labor Department’s Office of Inspector General.

“Today, more than 70 percent of our investigative matters pertain to unemployment insurance, and that number continues to grow by the day,” said Heiden.

DETR has received more than 704,000 initial claims for unemployment insurance through the week ending Oct. 3, nearly 97 percent of which have been filed since mid-March. Elisa Cafferata, the acting director at DETR, told the Review-Journal in September there are an estimated 100,000 to 200,000 potentially fraudulent claims.

DETR said Wednesday in response to reports of other fraudulent activity that it is “actively working with law enforcement entities and the Department of Labor to detect, prevent and address unemployment fraud.” Nevada employers and individuals who believe they have been a victim of unemployment fraud are asked to file a report with a form on DETR’s website.

Gov. Steve Sisolak praised the actions taken by federal law enforcement to expose unemployment fraud against the state, saying in a Thursday tweet, “By eliminating fraud, we can ensure more eligible Nevadans are connected to their benefits faster.”

The criminal case against Black’s scheme began when a Metro detective started digging into Okoye’s two cellphones and found communication between Okoye and Black using the messaging platform WhatsApp.

In messages, Black would inform Okoye of addresses along her route where residents picked up their mail infrequently or not at all, like at a vacation property, according to the complaint: “Babe just continue to use (redacted) Bennett mountain and u can try (redacted) Shawnee ridge… they barely check their box… and Bennett mountain the lady don’t check her box it’s a vacation home her parents got.”

According to the complaint, Black would send photos of mailings from DETR directed to the addresses predetermined by the pair to “confirm that they were ‘his’ and, once Okoye confirmed that fact, the two would arrange for delivery.”

Authorities interviewed one of the individuals, R.T., whose name is on one of the DETR debit cards found, and he confirmed that he didn’t apply for unemployment.

“There is probable cause to believe that Black had personally delivered and transferred R.T.’s DETR debit card after intercepting the mailing during the performance of her official duties as a postal carrier,” according to the complaint.

John Masters, the special agent in charge of the Postal Service’s Office of Inspector General, said Thursday that the American people’s trust in the Postal Service was violated in Black’s case. The charges against Black, he said, send “a clear message that mail fraud, identity theft, and destruction of US mail committed by a Postal Service employee carries very serious consequences and will not be tolerated.”

Black is set to make an initial appearance in Nevada District Court on Friday.

When police executed a search warrant on Hunter’s residence on Sept. 28, officers found a handful of DETR debit cards along with ID cards of other individuals that do not belong to him, including driver’s licenses from multiple states and Social Security cards, according to the complaint.

Officers also found notes and instructions on how to apply for unemployment benefits from Nevada’s and California’s unemployment systems. In one of the notes, Hunter allegedly had personal identification information of a person, L.B., including a Social Security number, date and place of birth, occupation, email and mailing addresses, and checking and savings account numbers.

“There is probable cause to believe that Hunter used L.B.’s (personal identification information) to apply for DETR benefits, but used a different address so that he would receive the DETR debit card by mail instead of L.B.,” according to the complaint.

Hunter is in custody at Clark County Detention Center and will make a court appearance at a later date.