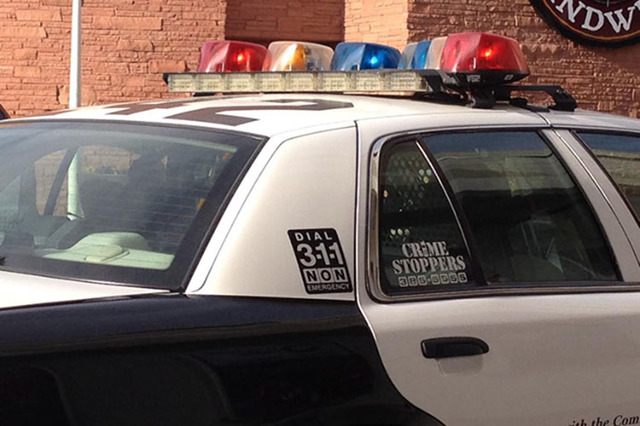 A man described as behaving erratically lost consciousness and died early Sunday after Las Vegas police officers used a Taser and a neck restraint technique on him outside a Strip hotel, the department said.

The incident unfolded about 1 a.m. when the man approached two uniformed officers inside The Venetian, 3355 S. Las Vegas Blvd. South, the Metropolitan Police Department said in a release.

The Metro officers described the man as “acting erratic” and paranoid. The man told the officers that “people were chasing him.” He ran off, and both officers followed, police said in a release.

Outside the property, the man tried opening a tailgate on someone’s pickup before approaching the side door of the vehicle. Then officers used a Taser, which police said took “immediate effect.”

The man was taken to Sunrise Hospital and Medical Center, where he was later pronounced dead at about 1:40 a.m., police said.

Police said the control technique used is not a choke hold. Information about the technique describes it as a maneuver that restricts blood to and from the brain, making it more difficult for suspects to resist arrest. When applied properly, the technique does not block a suspect’s airway.

Las Vegas Sands spokesman Ron Reese said The Venetian would not release a statement about the incident, referring inquiries on Sunday to Metro.

Members of Metro’s Office of Internal Oversight and Constitutional Policing will meet with the Sherriff’s Office early Monday morning to determine how the department will move forward with the investigation, according to Metro spokesman Michael Rodriguez.

It’s unclear when police will identify the officers involved and the man who died, because the incident is different from usual in-custody deaths and involves elements Metro does not classify as “deadly force” — namely the Taser use and neck hold, Rodriguez said.

Carolyn Becic, who came to town from Portland, Oregon, to visit family, said she watched the incident from the taxi pickup area of The Venetian.

She was on the second floor of the hotel-casino’s parking garage with her family and waiting for their Uber driver to arrive when she heard shouting from outside.

“We didn’t think anything, but then there was shouting again so we looked down and saw it happening,” Becic said.