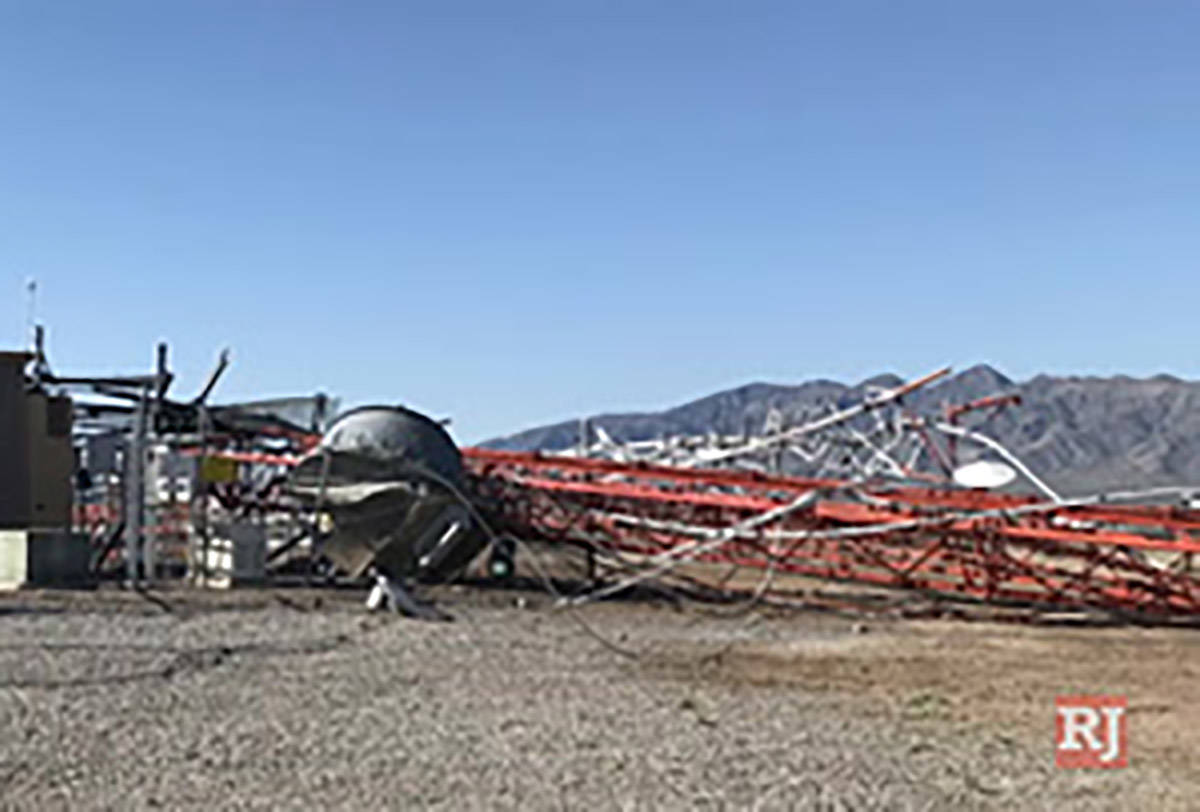 An investigation into the downing of a Nye County cellphone tower has found no evidence linking the vandalism to conspiracy theory-driven attacks on communications infrastructure, but authorities aren’t ruling it out.

The tower was found toppled May 5 in the area of Gamebird and South Blagg roads in Pahrump, prompting an investigation by the Nye County Sheriff’s Office and the FBI. Sheriff’s Office Capt. David Boruchowitz said authorities are still working to try to identify suspects in the case.

“There is no question that the tower was taken down as an intentional act,” Boruchowitz said. “At this time there is no suspect information, and detectives continue to investigate.”

The vandalism has prompted speculation, much of it on social media, contending the vandalism in Nye County could somehow be tied to a string of arson attacks on cellphone towers across Europe. The Associated Press reports that a conspiracy theory linking new 5G mobile networks to the COVID-19 pandemic is fueling arson on cellphone towers in England and elsewhere.

“Detectives are aware of the internet conspiracy theories, but at this time there is no indication of an ideological component to the crime,” Boruchowitz said.

The AP reported in April that some 50 fires targeting cell towers and other equipment have been reported in Britain, leading to three arrests. Telecom engineers have been abused on the job 80 times, according to trade group Mobile UK, making the U.K. the nucleus of the attacks. Photos and videos documenting the attacks are often overlaid with false commentary about COVID-19. Some 16 have been torched in the Netherlands, with attacks also reported in Ireland, Cyprus and Belgium.

Posts threatening to attack phone masts were receiving likes on Facebook. One post in an anti-vaccine group on April 12 shared a photo of a burned phone mast with the quote, “Nobody wants cancer & covid19. Stop trying to make it happen or every pole and mobile store will end up like this one.”

Boruchowitz said in an email to the Review-Journal that “all possibilities are being considered, but at this time there is no evidence related to the crime that leads towards terrorism or any other motive.”

The sheriff’s office is the lead agency on the investigation. The FBI is assisting. The antenna structure registration for the tower in Pahrump shows licensing and usage of the tower is owned by an entity known as Cellco Partnership, which Bloomberg says does business as Verizon Wireless. As of May 5 the tower was listed as dismantled.

The physical tower is owned by American Tower Company.

“We are planning to rebuild the site. In the interim, to assist customers who had equipment on the tower, we are working with them to install a temporary cell on wheels so that service continues,” said Matt Peterson, vice president of communications for American Tower.

A statement issued by Verizon regarding the Nye County tower said Verizon leased space on the tower for wireless facility (cell site) equipment.

“Since the tower was destroyed … we have made adjustments to cell sites in the surrounding area to make up for much of the lost coverage, so the customer impact is minimal,” said Rich Young, spokesman for Verizon. “We are working on a temporary solution that will compensate until the site can be rebuilt.”

Rise Broadband, a wireless internet provider, also operates on the tower. Richard Abels of Abels Communication Company said Rise leased a spot for its equipment on the downed tower. Rise did not have 5G equipment on it, but someone else may have.

“This is the first time Rise has had any of its equipment vandalized in this way,” Abels said.