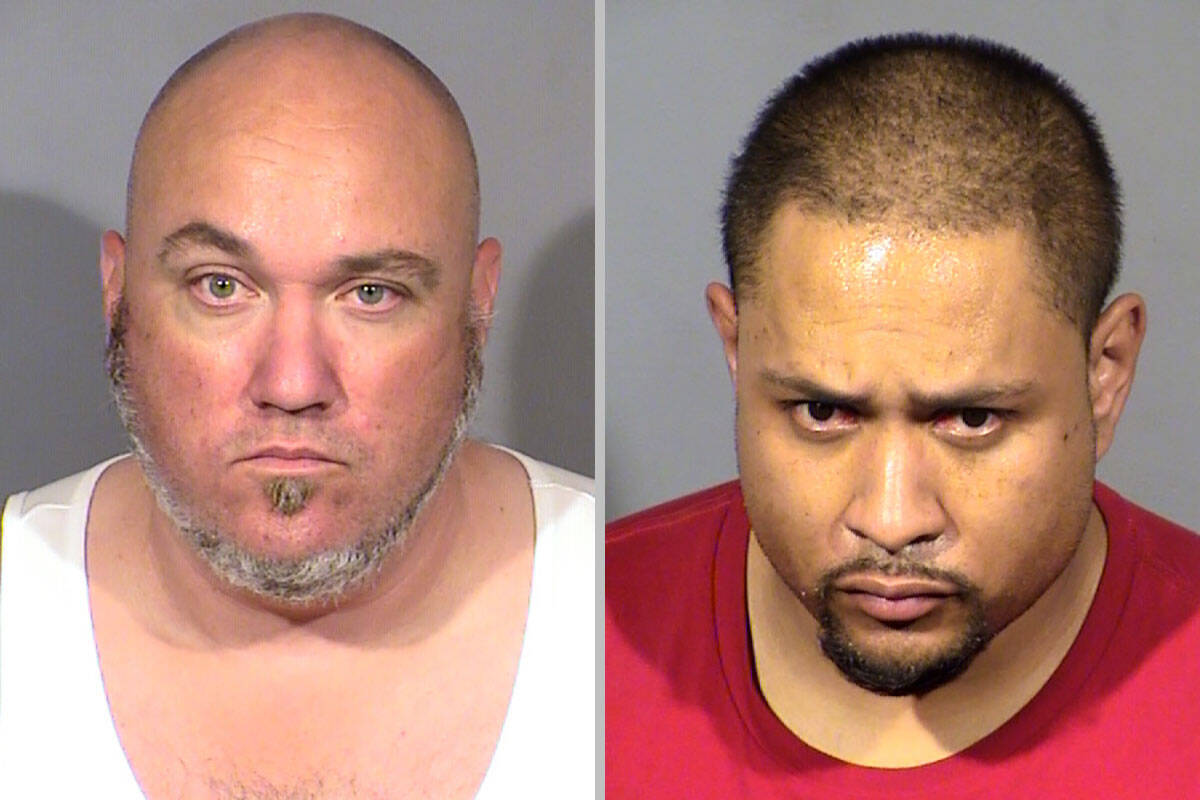 Robert Stice, left, and Shane Perry, both of Oregon, have been arrested in the detonation of a pipe bomb at a Las Vegas apartment complex. (Las Vegas Metropolitan Police Department)

Two Oregon men have been arrested in a pipe bomb explosion in a dumpster that rattled residents of a central Las Vegas apartment complex early Wednesday.

Robert Stice, 48, of Salem, and Shane Perry, 34, of Portland, were each booked at the Clark County Detention Center this week on felony possession and use of an explosive device to damage property.

Las Vegas police said the men were arrested after a large explosion in a dumpster at the International Villas on the 4600 block of Koval Lane that woke up residents and even knocked a picture off one woman’s wall at 2:52 a.m.

Las Vegas police wrote in arrest reports for the pair that a police armor squad and detectives from the Southern Nevada Counter Terrorism Task Force were called to the scene of the explosion near Harmon Avenue.

“The north facing side (of the dumpster) appeared to have been torn open by an explosive blast strong enough to not only break welds, but to tear the metal, as well as debris, scattered around on the ground near the dumpster,” police said.

Police obtained security video showing a Chevrolet Suburban pulling into the Villas moments before the explosion. Police later found the Suburban at a resort on East Harmon Avenue. More video surveillance showed two men coming and going from the Suburban around the time of the explosion. This ultimately led police to stop Stice and question him.

Stice, police said, acknowledged his involvement with Perry in detonating the bomb.

“Stice did not know where Shane got and /or made the device and indicated it was already put together ‘as is,’” police wrote. “Stice initially called the device a ‘firework’ but later admitted it was a pipe bomb.”

Stice said the two “did not want to start a fire in the desert,” so they decided to toss it in a dumpster, according to police. Stice initially said Perry lit the fuse on the bomb but later acknowledged that Perry was driving and that he lit it.

“The fuse burned much quicker than they expected so after the device was thrown in the dumpster they pulled away and the explosion occurred almost immediately thereafter,” police said. “Stice indicated he was surprised by the volume of the explosion as he did not expect it to be so loud.”

Stice apologized, saying he “enjoyed fireworks but did not know this was going to be so loud.”

Police then arrested Perry. He denied any wrongdoing, saying Stice had lit what he thought was a firework and tossed it in the dumpster.

“Perry said he had no knowledge of an actual pipe bomb,” police said.