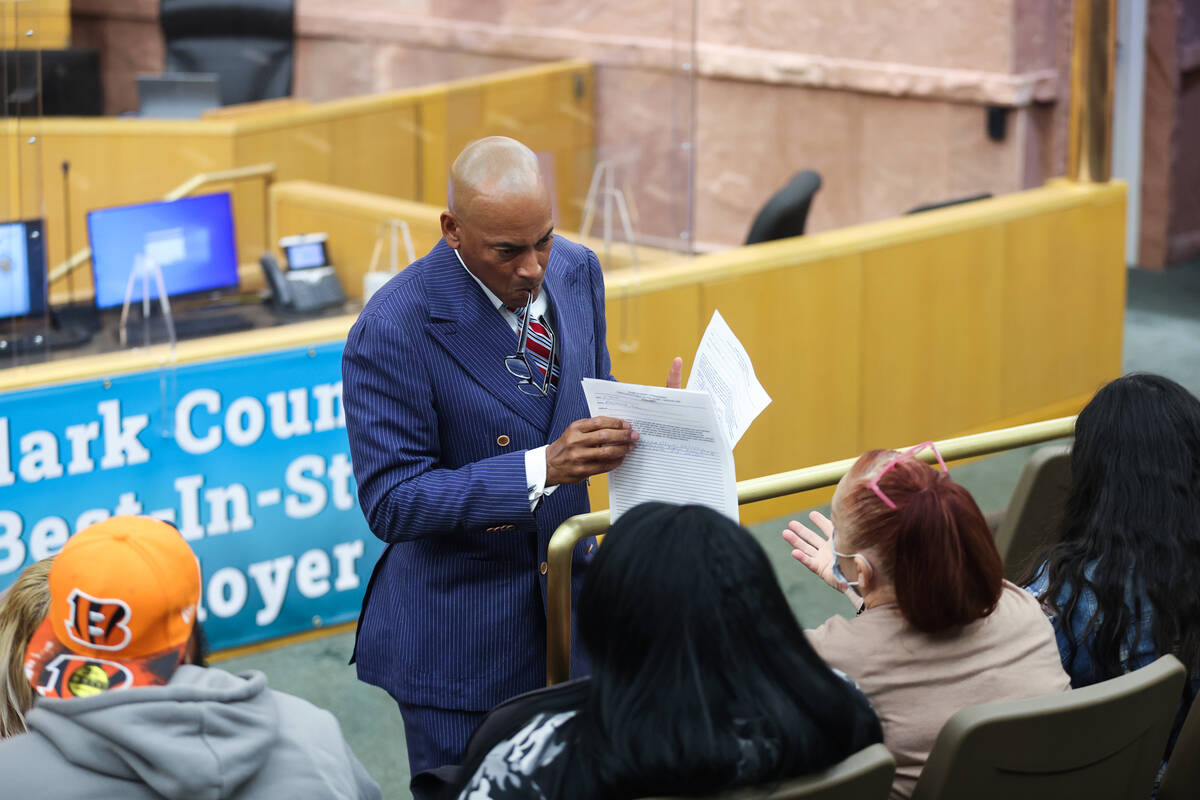 Ombudsman Carl Arnold speaks with the family of victim Demetrius Deshawn Roberts at a fact-finding review in his death at the Clark County Government Center in Las Vegas on Monday, Nov. 28, 2022. (Rachel Aston/Las Vegas Review-Journal) @rookie__rae 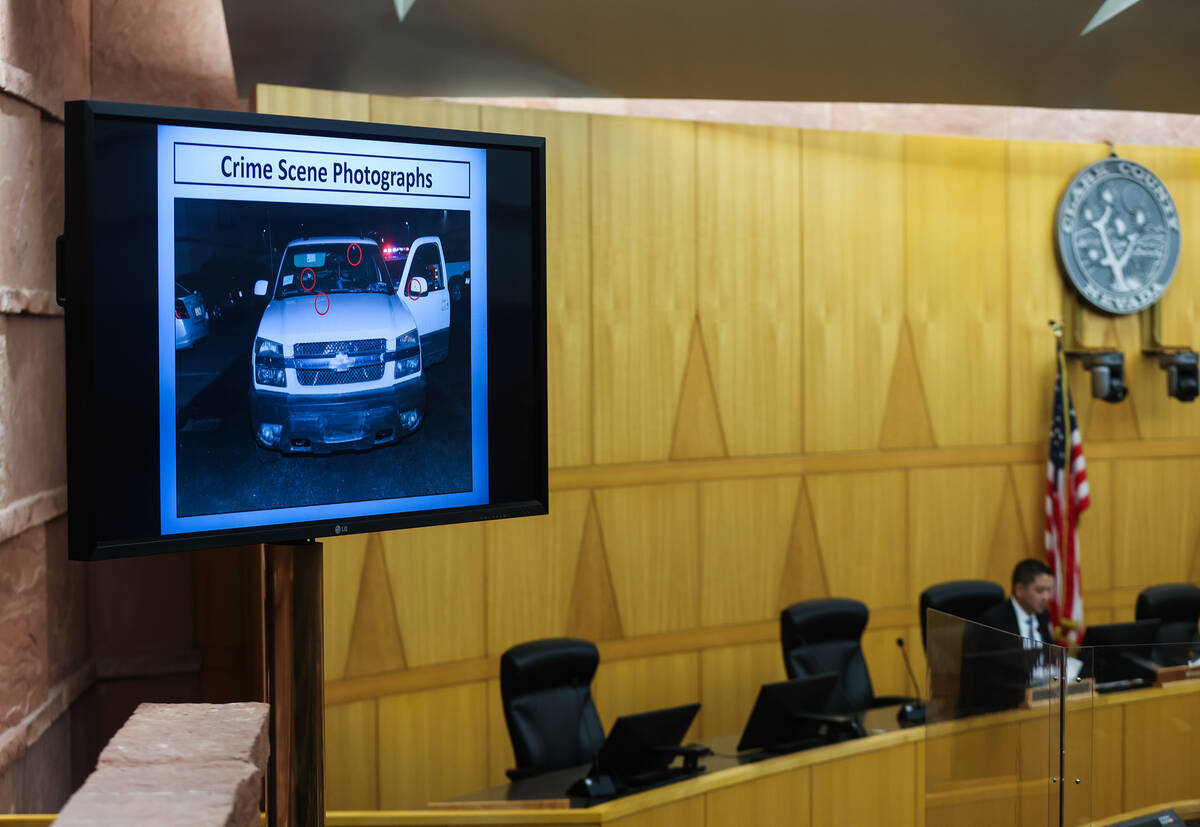 Crime scene photos are shown at a fact-finding review in the death of Demetrius Deshawn Roberts at the Clark County Government Center in Las Vegas on Monday, Nov. 28, 2022. (Rachel Aston/Las Vegas Review-Journal) @rookie__rae 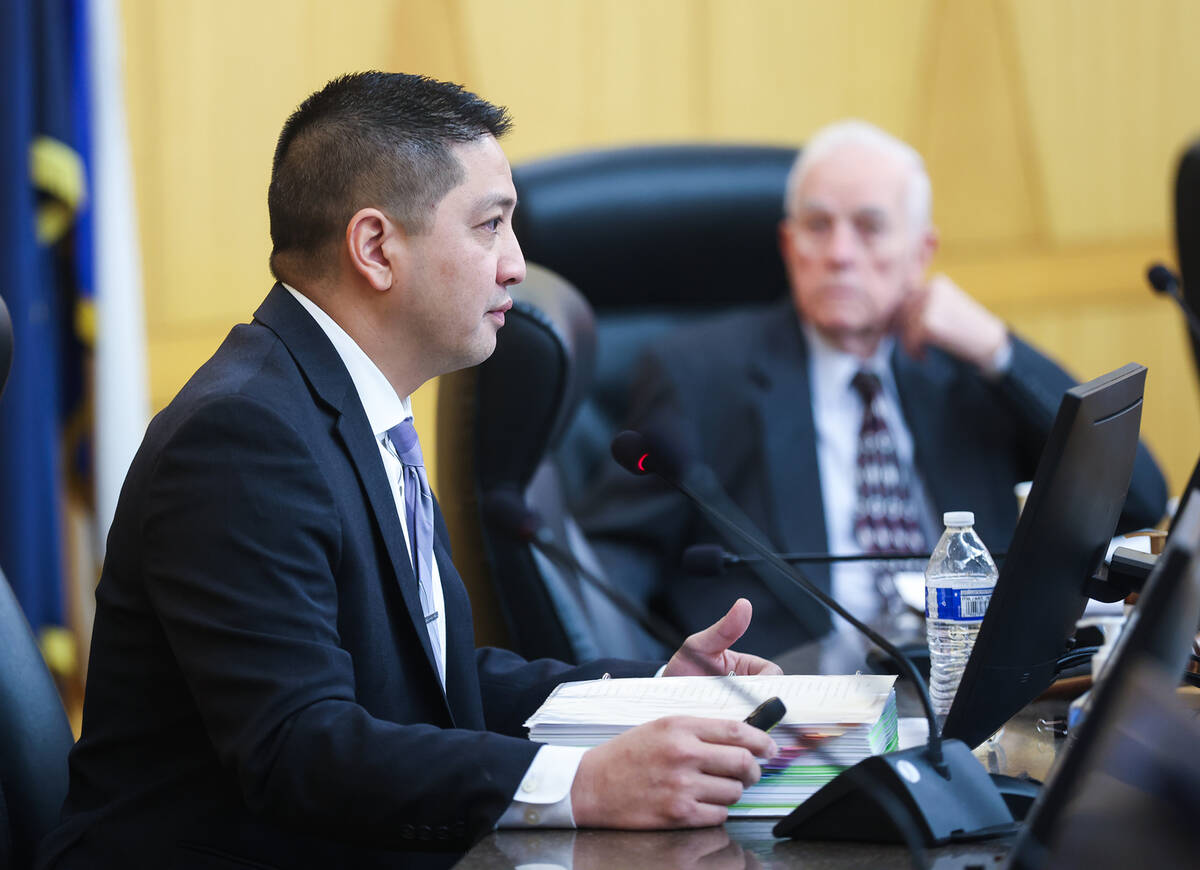 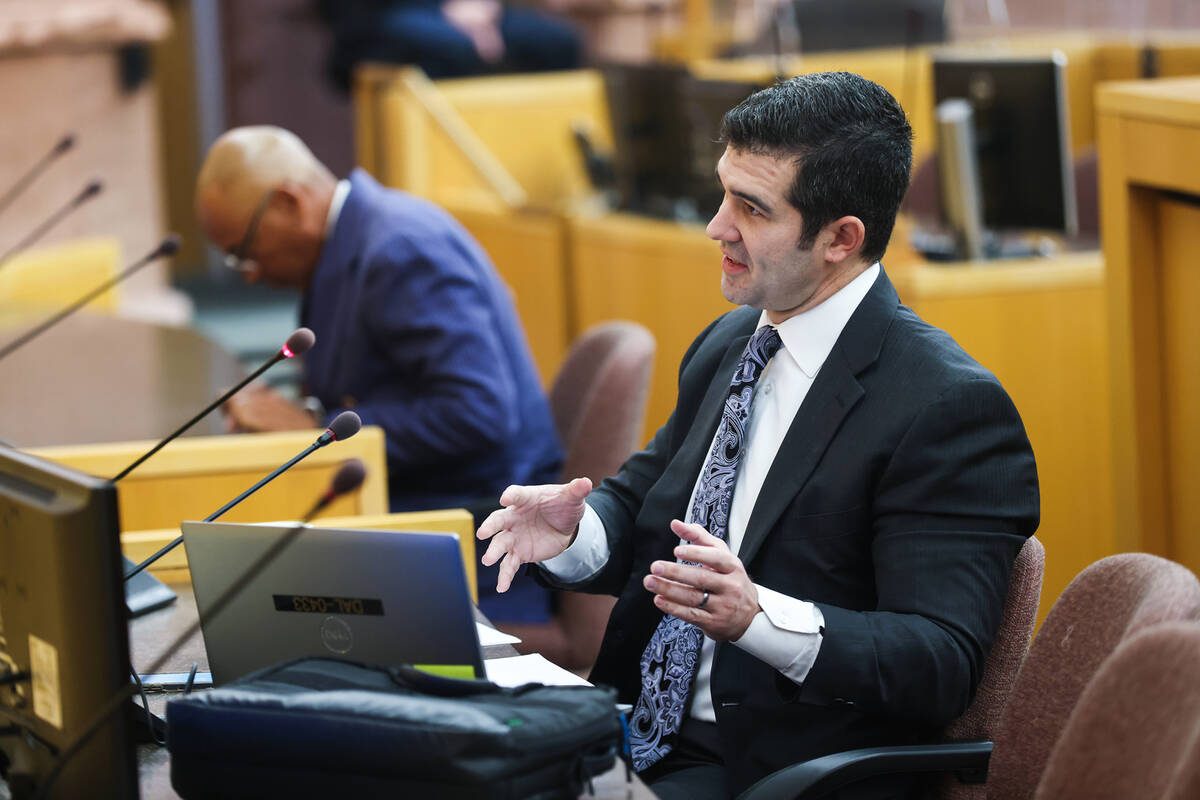 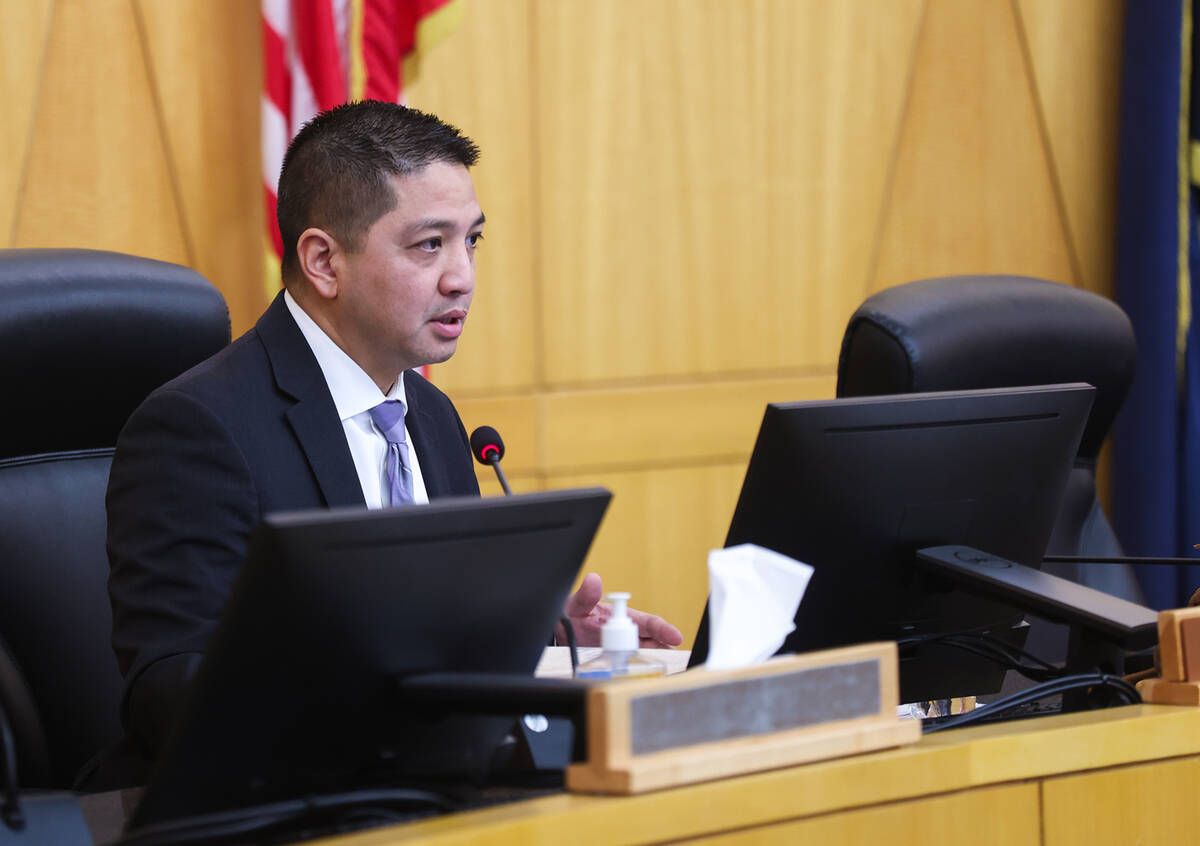 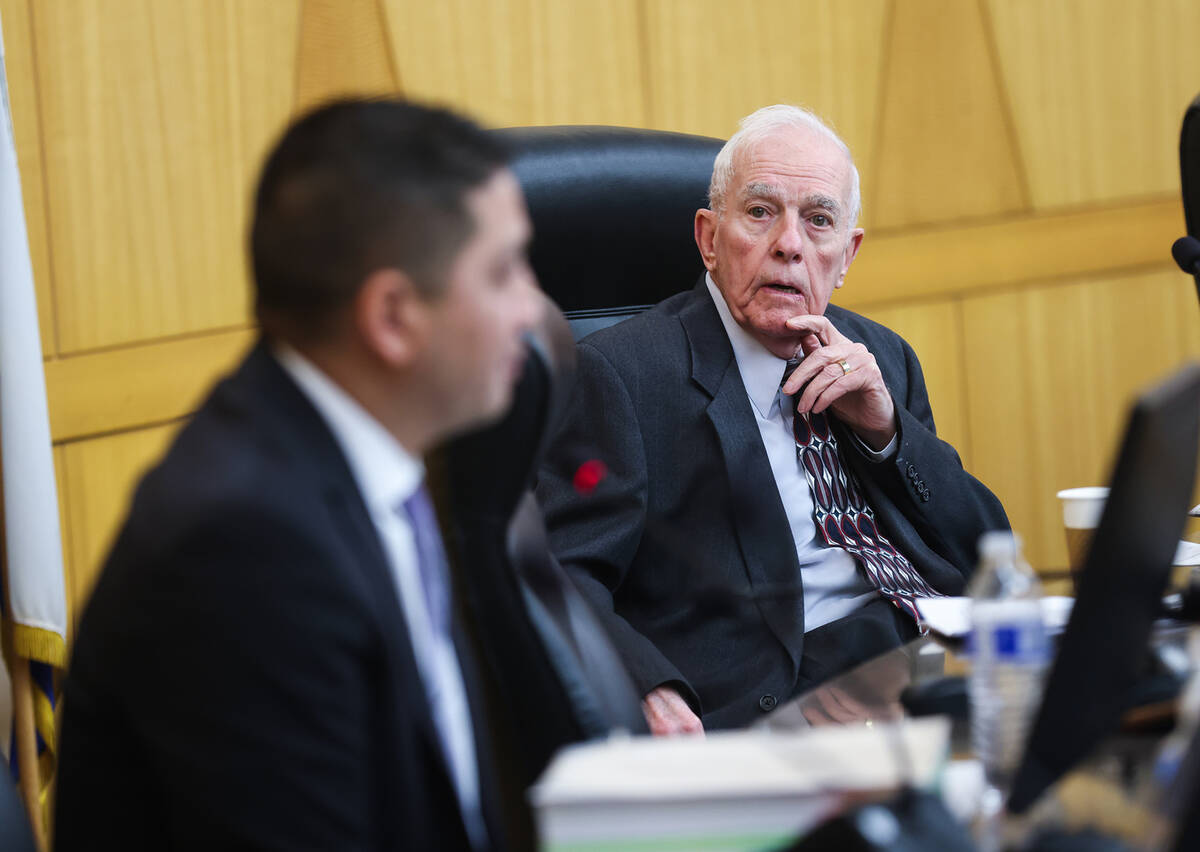 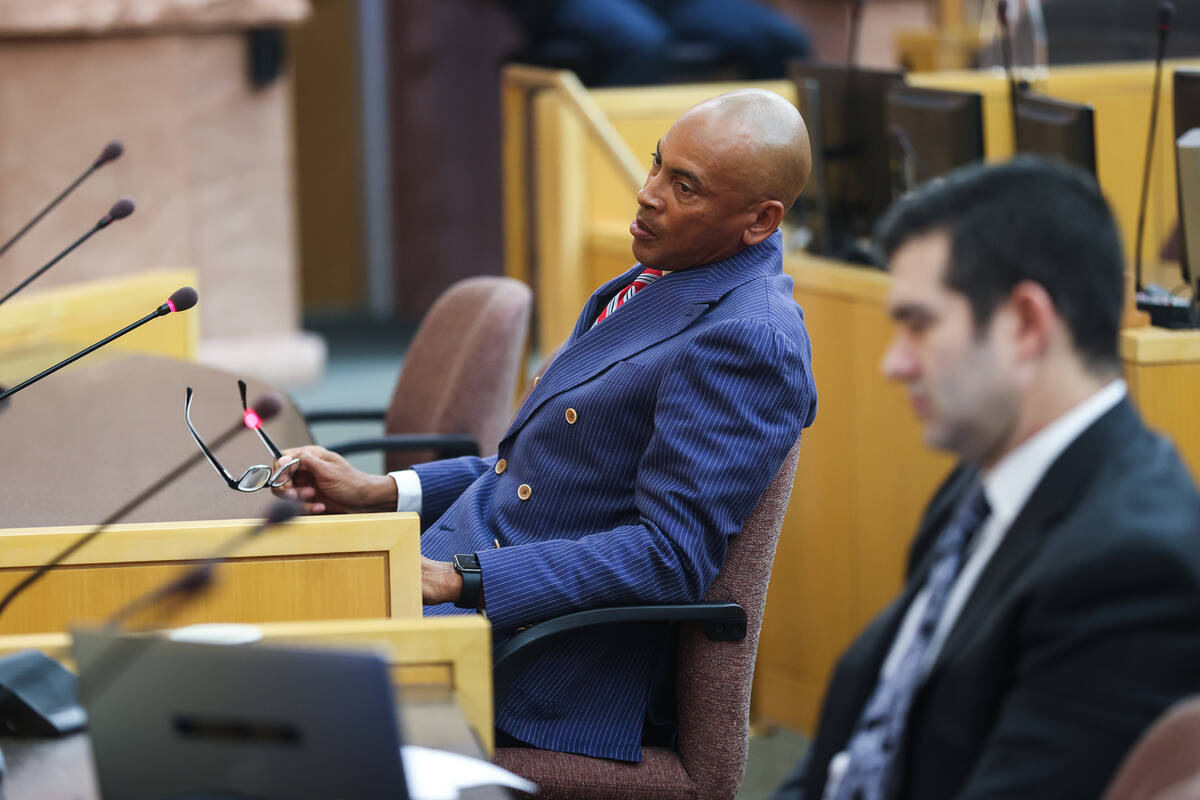 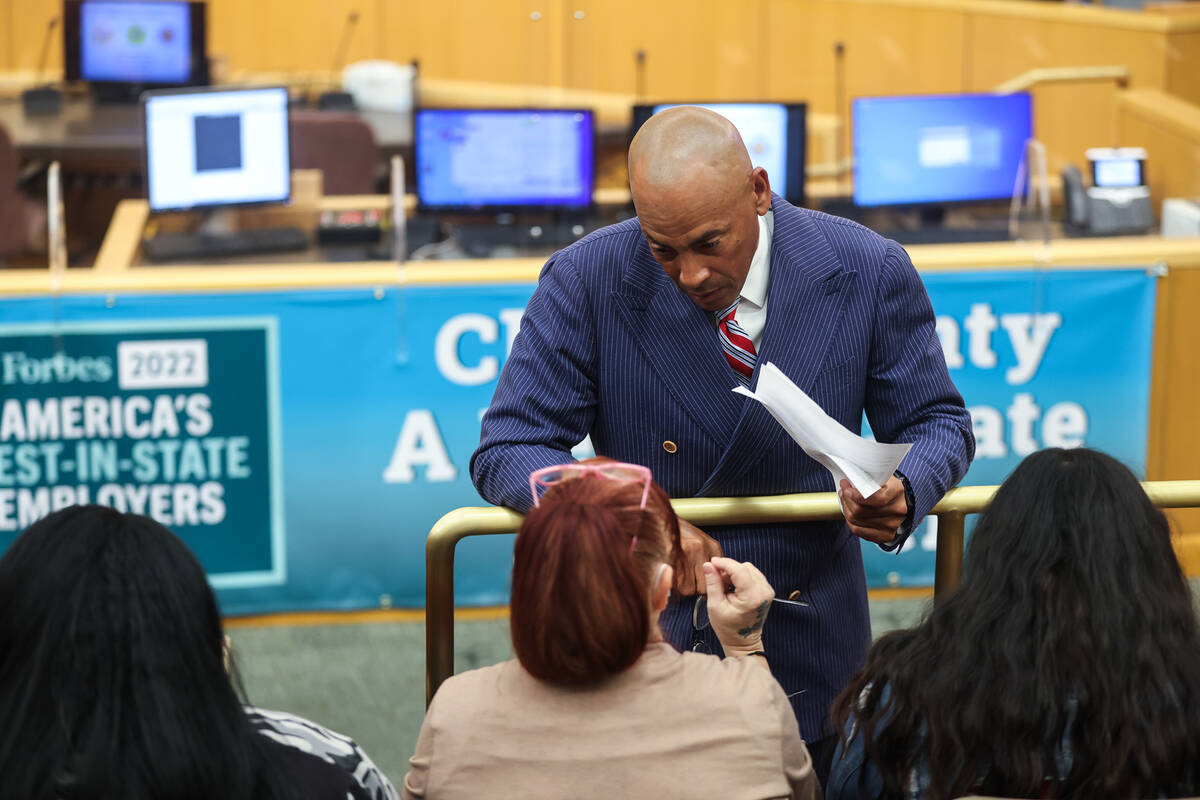 Ombudsman Carl Arnold speaks with the family of victim Demetrius Deshawn Roberts at a fact-finding review in his death at the Clark County Government Center in Las Vegas on Monday, Nov. 28, 2022. (Rachel Aston/Las Vegas Review-Journal) @rookie__rae

No body camera video showed the moment a 21-year-old man was shot in the back and killed by Metropolitan Police Department officers while running away after he struck a woman and fired rounds at the officers, a detective said Monday.

Demetrius Roberts died on the evening of Oct. 4, 2021 from a gunshot wound to the left flank. Metro’s Force Investigation Team Det. Scott Mendoza said officers Theron Young and Joel Blasko exchanged gunfire with Roberts, but detectives could not tell who fired the fatal shot because both officers had a 9mm handgun.

Blasko’s body camera was not activated until after the shooting, Mendoza said, and the footage did not show Blasko performing CPR and handcuffing Roberts before he died. Neither officer gave a statement to the Force Investigation Team.

Mendoza presented Young’s camera footage and photos of evidence from the shooting during a fact-finding review held by Clark County officials on Monday. After a deadly use of force or in-custody death, a police detective with the Critical Incident Review Team will investigate the use of force on the officers’ part and complete a report that is submitted to the district attorney’s office for review.

If the district attorney’s office makes a preliminary decision not to charge the officers criminally, the Force Investigation Team presents the results of that review, usually one or two years after the death, for the public to ask questions.

Roberts’ family representative, attorney Carl Arnold, served as the ombudsman and consulted the family multiple times so they could ask questions. The family declined to give a statement after the hearing.

Around the same time, Roberts’ ex-girlfriend called to say that after the two were in a fight, Roberts took her Charger without permission and drove off. The woman’s 9mm handgun was in the car.

Officers found the car at the woman’s home, near the 4100 block of Silver Dollar Avenue, about an hour later. Mendoza said gang enforcement officers called for backup after they saw Roberts hit the woman as the two were walking in a nearby alley.

Witnesses told police they saw Roberts reaching for his waistband as Young and Blasko drove up in a patrol vehicle. Mendoza said Roberts fired eight shots at police before running through the alley. Young returned two shots and chased Roberts.

The ex-girlfriend was shot in the arm by crossfire before Roberts and the officers took off running. The woman refused to elaborate on who shot her, but Mendoza said detectives believe Roberts injured the woman.

“Her positioning and her statement would suggest that the decedent had shot her,” Mendoza said.

After Roberts and the officers reached Pennwood Avenue, across from Clark High School, Roberts fired at least one round while running from the officers. Blasko fired three shots and Young fired 14 before Roberts fell to the ground.

Young’s body camera showed him get out of the car and run, but Roberts never appeared on the video. A woman could be heard screaming, “Oh, my God, no” and “I need an ambulance” while Young ran from the woman.

“Towards the end when the shots were fired, officer Young as he puts his arms up, something, either his arm or his lapel, is blocking the view of the camera,” Mendoza said.

The family declined to speak after the hearing.

Roberts’ mother arrived in her truck with Roberts’ 2-year-old son just before the shooting. Mendoza showed photos of the white truck with several holes in the windshield and bullets lodged in the vehicle from where he said Roberts fired through it. The woman and the baby were not injured.

Within about two weeks, the district attorney is expected to make a final decision about whether charges will be filed against any officers in connection with the shooting. A report outlining the final decision will be posted on Clark County’s website.