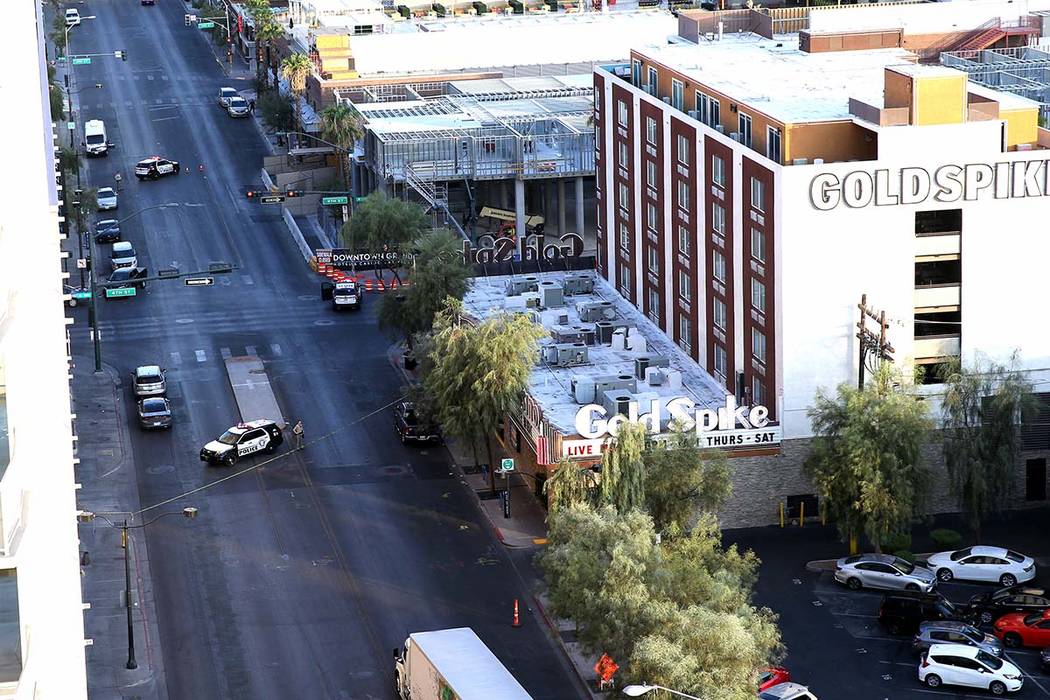 Police remain at 4th Street and Odgen Avenue in downtown Las Vegas, Thursday morning, Aug. 22, 2019, investigating an overnight shooting involving an off-duty officer and two others. Three men involved in the shootout are facing a slew of felony charges ranging from attempted murder and robbery to battery and conspiracy to commit murder, the Las Vegas Review-Journal has learned. (Kevin Cannon/Las Vegas Review-Journal)

Three men believed to have been involved in a shootout Wednesday night that wounded an off-duty Las Vegas police officer are facing a slew of felony charges ranging from attempted murder and robbery to battery and conspiracy to commit murder, the Las Vegas Review-Journal has learned.

Court and jail records have identified the suspects as Johnathan Kentral Pennington, 26; Markquwon Allen, 25; and Devan Allen, 27. The trio remained in custody Friday at the Clark County Detention Center.

Their alleged roles in the shootout at Sunking Street and Dole Avenue were not immediately clear, but Metropolitan Police Department Capt. Nichole Splinter has said that the shootout erupted about 11:30 p.m. Wednesday when the off-duty officer tried to de-escalate a confrontation between a group of people and an individual.

As the officer approached the group, Splinter said, at least one person drew a weapon and pointed it at the officer, leading to an exchange of gunfire.

Details on the officer’s injuries have not been released, though Assistant Sheriff Tim Kelly said Thursday morning that the officer was “in good spirits and is going to recover.”

The officer, who will be identified within 48 hours of the shooting per Metro protocol, was hospitalized Wednesday evening at University Medical Center.

Two people in the group were struck in addition to the officer, Splinter said, and also were taken to the medical center. Their conditions were not known Friday morning.

As the officer fell to the ground, three people, including the two injured, ran to a vehicle and sped off but were soon taken into custody near Fourth Street and Ogden Avenue in downtown Las Vegas.

Pennington and Devan Allen are expected in Las Vegas Justice Court on Tuesday morning for a status hearing. Markquwon Allen mad his initial appearance Friday, and bail was set at $100,000, records show.

Court records show that Pennington, a convicted felon, has a criminal history in Clark County dating at least to late 2015. At the time of the shooting, he was free on bail pending a trial in a drug case. Pennington also was convicted in December 2016 of possession of a controlled substance.

The records show he had previously been arrested in Las Vegas at least 19 other times on charges ranging from resisting a public officer and weapons charges for being a felon in possession of a firearm to battery on a protected person and possession of narcotics with the intent to sell.

Neither of the other two suspects appear to have a criminal history in the county, records show.