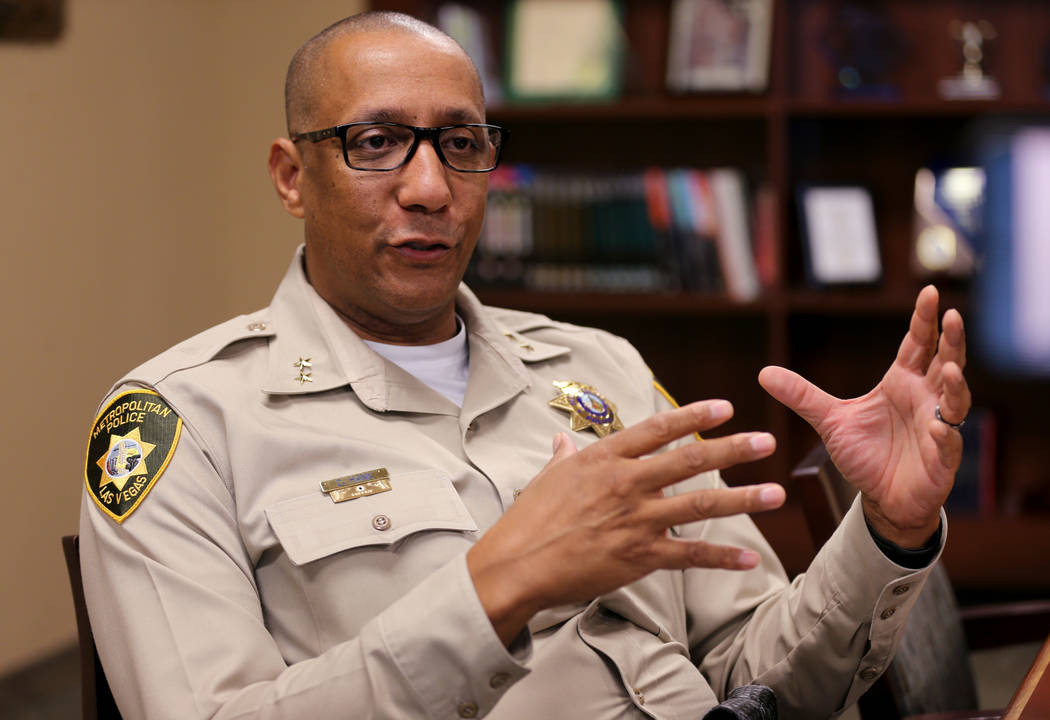 Assistant Sheriff Charles Hank talks to a reporter at Metropolitan Police Headquarters in Las Vegas Tuesday, Oct. 2, 2018, about changes the department has made in the wake of the of the Oct. 1 Strip shooting last year. K.M. Cannon Las Vegas Review-Journal @KMCannonPhoto

The unthinkable has already happened. Las Vegas police are working to prevent it from happening again.

And to do that requires some uncomfortable thinking, a Metropolitan Police Department official said Tuesday.

A year following the Oct. 1 mass shooting on the Las Vegas Strip, Hank sat down with the Las Vegas Review-Journal to discuss Metro’s efforts to prevent and prepare for another attack, as well as reflect on the year and how it changed the city.

The Police Department has worked to identify vulnerabilities in the community since a lone gunman rained bullets from the 32nd floor of Mandalay Bay, killing 58 and injuring hundreds more at a country music festival, Hank said.

The department has performed “tabletops,” or exercises designed to prepare for disaster scenarios, to address those vulnerabilities, Hank said.

“Anywhere there’s a large number of people, we’re looking for an opportunity to make that better, make it safer,” Hank said.

Metro also has worked closely with local resorts to create communication plans in case officers have to respond within them, Hank said. Officers know where they need to go, and security officers know what’s expected of them, he said. Police need assistance from the casinos — access, maps and directions — to respond as quickly as possible.

“It’s a collaboration,” Hank said. “You take these properties; they’re small cities and we’re trying to get to various locations within those properties.”

A Review-Journal investigation found that Metro officers experienced spotty radio coverage within Mandalay Bay while responding to the mass shooting last October. Metro is working to get “repeaters” to help amplify their radio signals, Hank said.

Additional security cameras are being added along and throughout the Strip, monitored by Metro’s fusion center, he said.

Las Vegas continues to host large-scale outdoor events in the wake of the deadliest mass shooting in modern U.S. history. Measures to protect those events can include snipers, spotters and designated quick-strike teams whose job it is to identify and “take out a threat, should it occur,” Hank said.

The teams already have been used at events such as the Rock ‘N’ Roll Marathon, Life is Beautiful and New Year’s Eve, Hank said.

But Hank asked the community to alert law enforcement when something “just doesn’t look right.”

The gunman was still firing upon the crowd when Hank, then a deputy chief overseeing Metro’s tourist safety division. got the call Oct. 1.

He flipped on his radio and heard the bullets, the screams and officers hitting their emergency buttons.

“It was a very concerning time and a very hurtful time because I felt like this was a part of my home. I have a responsibility to this community,” said Hank, who’s been with Metro for all 29 years he’s lived in Las Vegas.

A year later and the community is still healing, Hank said. But the shooting brought out the best in Las Vegas, he said.

Metro is also still healing from the shooting, which claimed one of the department’s own — officer Charleston Hartfield. Some officers wear the scars from that night, and others are still battling the mental wounds, Hank said.

Hank said the recovery is in its infancy, but Metro is making progress.

First responders tend to compartmentalize, Hank said, but counselors, including one who was on the ground at 9/11, have helped officers and others throughout Metro’s ranks since the shooting.

“It’s not something that you could just close the door and say you forgot about it,” he said.