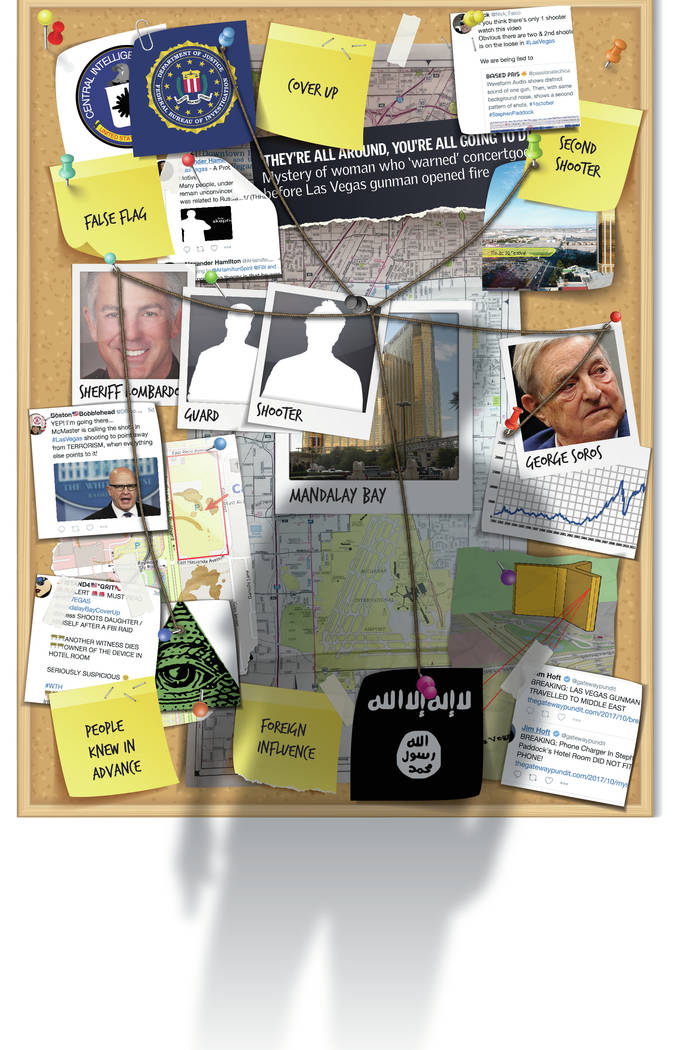 The conspiracy crowd took to the internet almost as soon as the gunfire stopped.

Every mass-casualty event attracts its share of crackpots, and the Oct. 1 attack in Las Vegas would be no different.

Sketchy accounts from traumatized tourists fueled narratives of a coordinated terrorist attack and a far-reaching cover-up.

The lack of a clear motive spawned wild claims that Stephen Paddock was a patsy or a spy — or maybe even still alive somewhere.

Already, Clark County Sheriff Joe Lombardo said, he has seen more conspiracies and misinformation about this investigation than he has in other high-profile cases. The “keyboard tough guys” are out in force, he said.

Some of the stories were created or repeated by unscrupulous websites looking to cash in on the tragedy.

Undoubtedly, the loved ones of those killed in the attack have seen the fake news, too, some of it hurtful, even dismissive of what they have lost.

“You just purposefully have to ignore it,” the sheriff said. “We’re being transparent, as far as I’m concerned. … I hope my comments are strong enough that people believe what we’re saying versus what they read on the internet.”

There’s certainly no shortage of unsubstantiated or factually incorrect stuff to read.

“I would say that there is a definitely an increase,” said journalist Bethania Palma from Snopes.com, one of the largest and oldest fact-checking sites on the web. “It’s getting multiplied by the internet. It’s a lot more immediate.”

Snopes.com, which has doubled the size of its editorial staff in the past year or so, has already published fact checks on several false reports from the Las Vegas shooting.

But it’s hard to keep up, Palma said. “Fake news can be produced so quickly and cheaply.”

Many of the conspiracy theories she has heard so far follow the “false flag,” New World Order narrative popularized by Alex Jones’ Infowars website: Basically, the attack was staged as an excuse to take away people’s guns, clearing the way for the secret, totalitarian world government to take over.

Palma said she traveled to Las Vegas last weekend to get a firsthand look at the scene, talk to people who were there and get answers she just couldn’t get from her home in Southern California.

“I was surprised to talk to so many people who believed the second-shooter conspiracy theory,” she said.

Some of the conspiracies are rooted in early reports heard over police scanners. Others are pinned to discrepancies in the information released by the authorities, something that is almost guaranteed to happen after an incident of this magnitude, Palma said. “There’s an explanation for everything people are posting.”

Even some witnesses emerged from the attack with versions of events that just weren’t true. Chaos, trauma and fear play tricks on people, Palma said.

“This is a crowd of 22,000 people who went to a country music concert that turned into a massacre,” she said.

Former Aurora, Colorado, Police Chief Dan Oates said the conspiracies got really bad after the movie theater shooting there in 2012. People took to the internet to claim the attack never happened, that no one died and that James Holmes was innocent.

“Really perverse crap,” said Oates, who is now the chief of police in Miami Beach, Florida.

One person even found a way to contact one of the victim’s mothers and told her that her son wasn’t dead. Oates said they tracked that person down in Oregon and had him arrested.

Ultimately, it’s up to the authorities to decide what’s real and what isn’t. Tips can be important — even crucial — to an investigation, so if the public has legitimate information to share, Lombardo said his department won’t ignore it.

“But there’s some things out there I’ve just got to throw the bull—— flag at. We can’t be wasting our time and resources chasing them,” he said. “We can’t spend our time chasing ghosts.”

University of Massachusetts professor Kirby Farrell is a regular contributor to Psychology Today and the author of a 2015 book about America’s fascination with rampage killings.

He prefers the term “conspiracy fantasies,” not theories.

Farrell said the need to invent — or to believe — elaborate and often unprovable explanations for attacks like the one in Las Vegas is rooted in fear and avoidance. It is an attempt to “sanitize or wish away the inexplicable violence that overtakes certain individuals,” he said.

“Conspiracy fantasies are a kind of sophisticated game people play to prop up or reinforce denial,” Farrell said.

The internet merely increases their reach, while social media will guarantee delivery to a receptive audience.

“In a way, everybody has become an individual publisher,” Farrell said. “People compete to see who can attract the most attention.”

And much like the perpetrators of mass killings, those who traffic in conspiracy fantasties tend to feed off one another, he said. “There’s a kind of copycat quality in both.”

Radio show host and freelance Review-Journal editorial page columnist Wayne Allyn Root was among those criticized for spreading misinformation on the night of the Las Vegas attack. In a Twitter post from his personal account at 11:51 p.m. Oct. 1, he wrote that shots had been fired at seven different resorts on the Strip. A minute later, he told his 110,000 Twitter followers that the shooting was a “clearly coordinated Muslim terror attack.”

Root stands by what he did.

“I do NOT deal in conspiracy theories,” he said in an email.

Root insists everything he posted that night was based on information he was getting directly from law enforcement sources.

“It looked exactly like an ISIS terror attack, and I made a split-second decision to warn people in Vegas and get them out of harm’s way,” Root said. “And I’d do it again if I could save lives.”

Social media and video-sharing sites like Twitter, Facebook and YouTube now serve as the primary conduit for false reports and outright hoaxes. Recently, though, the web has seen a proliferation of fake news sites that seek to profit by spreading lies after a tragedy.

“It’s no question that a lot of these sites are making money off the ad revenue from the clicks they’re getting,” Palma said.

Transparency is one effective way to combat the conspiracy crowd, she said.

But even the most baseless stories can be stubborn. No amount of evidence to the contrary will make them go away. No amount of public shaming will silence the people spreading them.

Palma said she recently spoke to the parent of a child murdered during the 2012 massacre at Sandy Hook Elementary School in Newtown, Connecticut. The families of the victims are still being harassed by people who believe the shooting and the deaths of their children were faked.

“People in Las Vegas should be ready for that sort of thing,” she said.