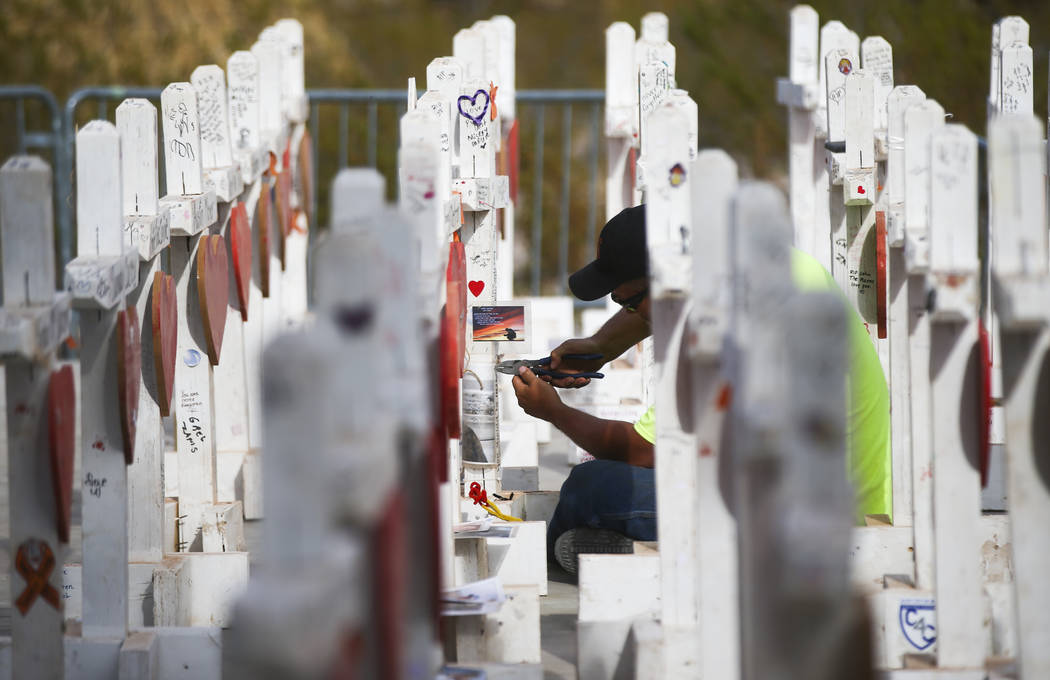 Volunteer Steve Round works on removing items from the crosses that were moved from a makeshift memorial at the &quot;Welcome to Fabulous Las Vegas Sign&quot; to the Clark County Museum in Henderson on Wednesday, Nov. 15, 2017. Chase Stevens Las Vegas Review-Journal @csstevensphoto

The fundraising effort in the aftermath of the worst mass shooting in modern U.S. history has been muted compared with other tragedies.

Donors have contributed around $17 million in the 68 days since the Oct. 1 Las Vegas shooting, in which a gunman killed 58 people and injured 546 from a suite on the 32nd floor of the Mandalay Bay. 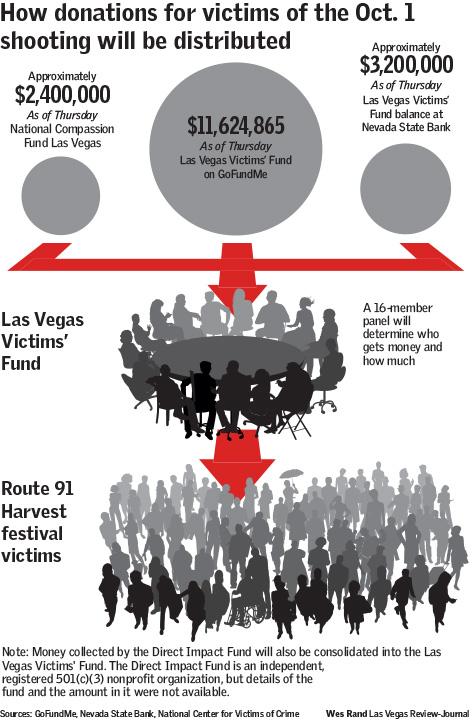 “People are tapped out,” said Alexandra Acker-Lyons, who is founder and president of the Palo Alto, California-based philanthropic consulting firm AL Advising.

“If you’re on a certain side of the aisle, you’re giving a lot to political funds. And, we just had three major hurricanes and several wildfires,” she said.

On top of that, shootings have become so frequent that, she says, people have become somewhat desensitized. Three of the deadliest shootings of the past 35 years have occurred in the past 18 months, according to an investigation by Mother Jones.

Chris Kearney, chair of the UNLV psychology department, said it’s possible that people are having a hard time feeling a personal connection to the shooting.

“A lot of the people that were shot here weren’t necessarily from Las Vegas,” he said.

Rick Cohen, spokesman for the Washington, D.C.-based National Council of Nonprofits, said it also didn’t help that there wasn’t a specific community that rallied around the victims.

“In the case of the Pulse shooting, there was a specific community (the LGBTQ community) that rallied around the victims,” Cohen said. “I don’t think people should need such motivation, but in some cases it does give people more of a reason (to donate).”

Cohen also said the national news media moved on from the Las Vegas shooting too quickly. 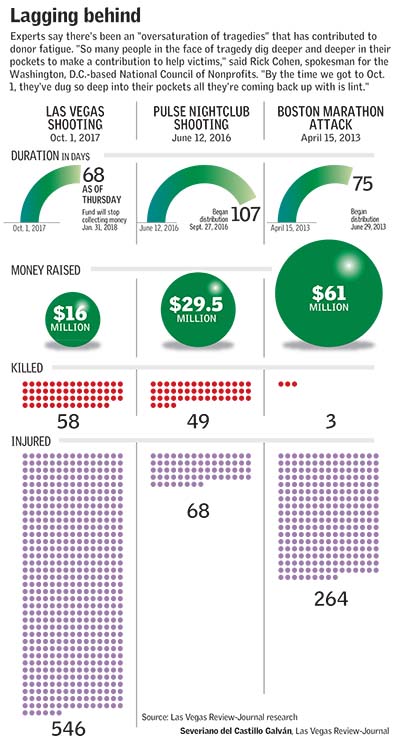 “It’s unfortunate that there’s so much going on that the media has to decide which tragedies to cover and for how long,” Cohen said.

Between coverage of the White House, health care legislation, tax reform and a cascade of allegations of sexual harassment, the Las Vegas shooting has been elbowed out of the national media’s prime spots, he said.

“It just seems like there’s this endless parade of other things, and each one takes attention away from the last one,” he said.

A Las Vegas Review-Journal analysis found there were at least 167 crowdfunding campaigns focused on helping specific individuals related to the Las Vegas shooting as of Oct. 12.

“It could be that people have already contributed to these separate accounts,” Benning said. “When you think about the Boston bombing in 2013 — in internet time, that’s forever ago, and these kinds of individualized sites didn’t exist, so the Boston One Fund was an easy target for people.”

Cohen agreed that there was some confusion immediately following the shooting with several disconnected efforts to raise money for victims and families.

“The city of Boston had something set up very quickly in response to the Marathon bombing,” Cohen said.

Clark County, which has jurisdiction over the Strip, did not have the infrastructure in place before Oct. 1 to accept donations. It took about three and a half weeks to establish a nonprofit on the county’s behalf, now known as the Las Vegas Victims’ Fund. And it took over a month and a half for the IRS to grant the nonprofit tax deductible 501(c)(3) status, in an expedited process.

The end-of-the-year giving season may give the Las Vegas Victims’ Fund a boost.

“It’s an opportunity to remind people that funds are needed,” said Acker-Lyons.

But, at the same time, the giving season could be another thing taking attention way from the Las Vegas Victims’ Fund.

“Everyone has their end-of-year fundraising going on right now. It could be a philanthropic blessing and a curse to be asking right now,” she said.

The Las Vegas Victims’ Fund will stop collecting money Jan. 31, 2018, giving donors about two months to come through for survivors of the Oct. 1 Las Vegas shooting as well as families of the 58 victims who died.